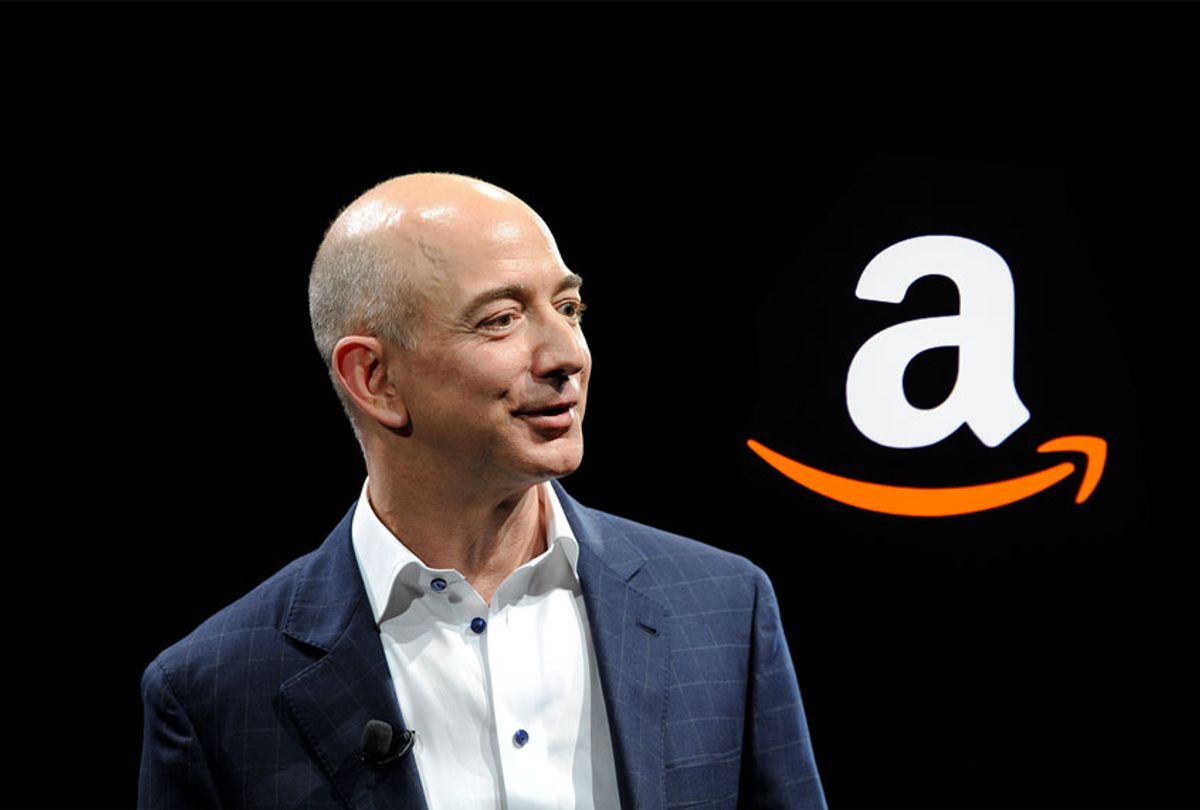 The Amazon Empire: The Rise and Reign of Jeff Bezos (Reuters/Gus Ruelas)
--

Full disclosure: This author had previously worked for an Amazon-affiliated company for seven and a half years.

"Amazon Empire: The Rise and Reign of Jeff Bezos," the latest two-hour episode of PBS' "Frontline," opens with a scene that captures the core dilemma of the American consumer's relationship with the online retail colossus. The first scene we view is Bezos' May 2019 announcement of Blue Moon, a space exploration company he created that launched with the task of colonizing the moon.

Bezos is pledging a billion dollars a year of his personal fortune to fund his latest vision for the future, where he sees people living in space stations. Have no doubts that these vessels will be composed of Amazon products and the people living there will be encouraged to live off of goods and services derived from Amazon. They'll probably be Amazon employees, in fact.

After all, this is a company that has set its sights on entering the health insurance marketplace and bought a grocery chain in order to seize a share of that retail territory. This came after altering consumers' expectations as to what they can buy, how much they can expect to pay for it, and how quickly that product can arrive at their doorstep.

The idea of Bezos' launching his consumer-focused vision into sowing the seeds of a new civilization in space is therefore both exhilarating and terrifying – more so, in fact, than Elon Musk's SpaceX project. From the outside, one has the impression that Musk, like Sir Richard Branson before him, wants to succeed to serve his own sense of self-aggrandizement. Bezos on the other hand, doesn't set his mind upon a project without envisioning some version of total domination.

Amazon has figured out how to win the hearts and minds of the American consumer, a buyer so hooked on convenience that he or she generally doesn't think too deeply about the hidden moral toll of that convenience – or how much personal information they willingly give away in exchange for one-click shopping and easy access to information by way of voice command.

"Everything that is admirable about Amazon is also something that we should fear about it," Atlantic writer Franklin Foer observes in "Amazon Empire," stating aloud the central thesis of this concise "Frontline" episode produced by James Jacoby, director of the 2018 "Frontline" film "The Facebook Dilemma."

Distilling these notions into a two-hour episode is a daunting mission given all that we know about Amazon and our love/hate relationship with it. In fact, in a conversation I had with him a few months ago, I observed that "Frontline" could devote multiple episodes to Amazon's influence on America – not merely how we shop, but on workplace culture, politics and the gig economy . . . among other topics.

In under three decades, Amazon has exploded from an online book retail site into the Everything Store. Only recently has the public been made aware of just a few of the costs of that convenience and service the customer offers, including compromising employee safety and pushing workers beyond their physical limits in the product and packaging warehouses known as fulfillment centers.

Separate and very real concerns exist with regard to the way that Amazon is crushing independent retailers and smaller chains with its business practices. Democratic candidates have been vocally critical about Amazon's role in shutting down brick and mortar retail locations or forcing smaller chains to sell through its services.

Stories have come to light about Amazon's practice of transcribing conversations overheard via its Echo devices, ostensibly to help train the system. Shoppers willingly placed these listening devices into their homes. They've equally as willingly placed cameras in their private spaces which hackers have exploited to show how easily private citizens can be spied upon.

Yet even as Amazon has altered the marketplace, starting with the world of books, it hasn't limited its aspirations to controlling the lion's share of the retail market.

Bezos himself has positioned himself to be a force in national politics and in Hollywood, buying the largest residence in Washington D.C. with the express intent to use it as a place to entertain the rich and powerful. He also bought The Washington Post and, according to its employees, has stayed out of the editorial decision-making in the business and reinvested profits into strengthening the newsroom. Amazon Studios, meanwhile, is adamant about conquering the film/series content space and going head-to-head with other online streaming giants such as Netflix.

Therefore any conversation about Amazon, and Bezos himself, is a conversation about the tension between its role as a public good and as a destructive, controlling entity that the government may view as a monopoly and take steps to break up.

Jacoby's work on "The Facebook Dilemma," which examined  that company's failure to swiftly move to counteract the platform being manipulated into a disinformation machine, proved to be Peabody-worthy. But with "Amazon Empire" he has a steeper and more difficult incline to contend with, because questions concerning obtaining and using user data are only one part of a much larger puzzle.

In taking a hard look at the company, and seeking to understand how Bezos' mind works without actually sitting down with the man,  "Amazon Empire" touches upon the multiple factors about the company that lead people to praise it as an innovative, inspiring entity that also has an outsize influence on politics, the economy, the environment, and even the value of their human workers.

And Jacoby looks at those issues fairly while leaving little question as to the worrisome nature of the company's domination-focused ethos.

However, viewers seeking more of a sense of who Jeff Bezos the man is can only glean cues from those who work with him. Bezos himself declined to participate in the episode, but Amazon made six top executives from the company available for interviews – noteworthy in itself for a company that holds information about its inner workings as closely to its vest as possible.

And one aspect of "Amazon Empire" that is truly worth appreciating is how artfully its executives talk circles around gigantic, alarming concerns or PR debacles, by seeming to empathize with the scope of the problem without expressly admitting culpability. Every major corporation does this. But these folks are incredibly smooth at appearing to be completely in control, calm and kindly.

In one very effective discussion regarding the privacy concerns surrounding the Echo and Ring devices, Jacoby quotes George Orwell's "1984" to Dave Limp, Amazon's senior vice president of devices and services in discussing the company's perceived role in normalizing surveillance.

"You had to live – did live, from habit that became instinct – in the assumption that every sound you made was overheard, and, except in darkness, every moment scrutinized," Jacoby intones, to which Limp responds, "Well, I don't want to live in that world."

(In some parody of the moment I imagined Ron Howard's "Arrested Development" voice piping in with, "He does live in that world.")

Balancing this slickness, alongside insights from journalists and academics, are Jacoby's interviews with nine former employees – several managers among them – none of whom gave rave reviews in their impressions of the Amazon we see today. Probably the most sobering (if not damning) of these comes from Shel Kaphan, Amazon's former chief technical officer and employee No. 1.

Kaphan is but one of several executives who were there on the ground floor of miraculous developments within the company, including its development of facial recognition software (which, though displaying numerous flaws, has been made available to law enforcement) and its expansion of marketplace to include third-party sellers, including those based in China who aren't beholden to American product safety regulations.

And not even he can refrain from stating his misgivings about the company's tactics and what is has become. "I think not all of the effects of the company on the world are for the best, and I wish it weren't so," he says. "But I had something to do with bringing it into existence, so that's partly on me."

Late in the piece, Jacoby observes via one of his questions that the Amazon story is the story about capitalism at its most successful and relentless – which means it's about economic disparity and the power the larger public has lost as a result of one man's rise to become the richest man on Earth.

"Amazon Empire" is a compelling, succinct summary of what enormous success means in the capitalist landscape as we currently know it, one that clarifies our essential part in that success and the frightening fact that there is no way to truly opt out of feeding its bottom line without completely going off the grid. You can decide not to order any products from Amazon or subscribe to any of its services, yet if you're reading this you're probably utilizing in some aspect of the Internet's infrastructure that feeds back into Amazon.

This edition of "Frontline" ends much in the way it begins, with an archival clip of Bezos reminding his audience that "big things start small." That motto beckons believers in Amazon to be inspired, but to those closely considering the ramifications of the company's success, it may sound like a warning. Both interpretations are correct.

The two-hour "Frontline" special "Amazon Empire: The Rise and Reign of Jeff Bezos," premieres Tuesday, Feb. 18 at 9 p.m. on PBS member stations, on the PBS Video App and streams online at PBS.org/frontline.