For many mainstream commentators, Bloomberg is the cure for Democrats — but the Times' Charles Blow is not on board 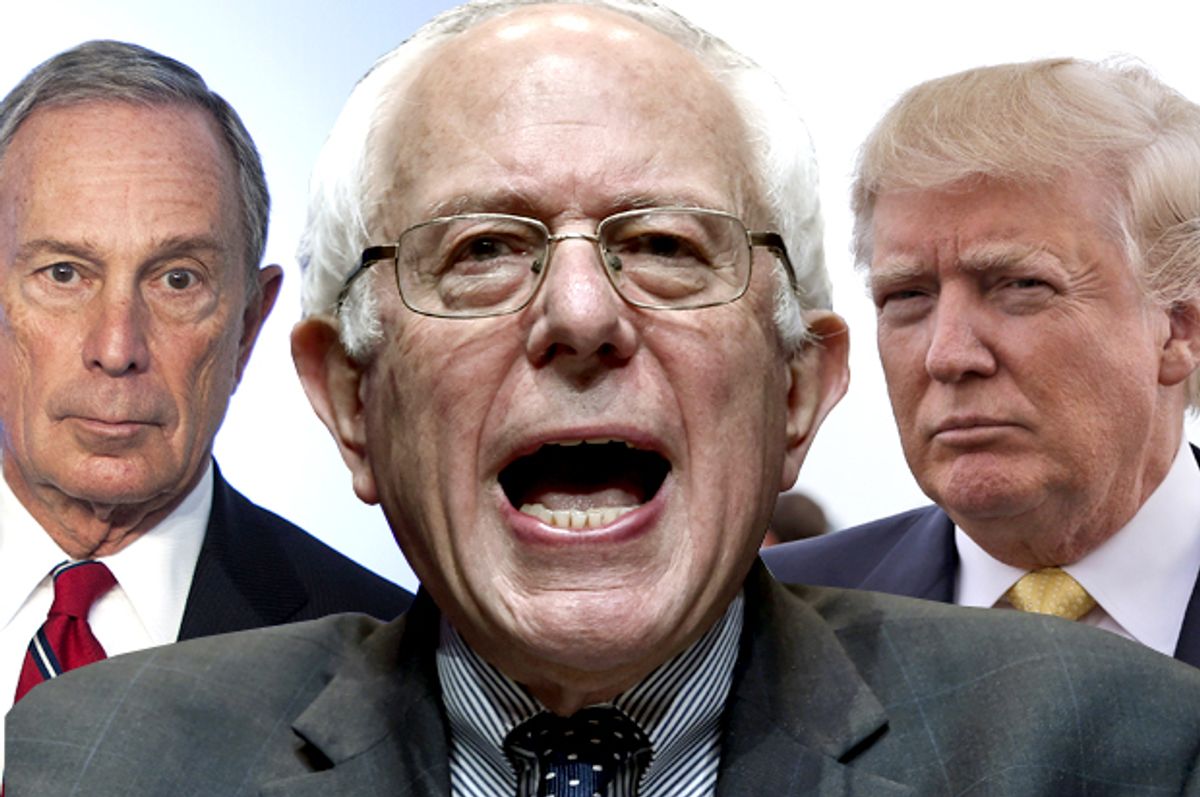 Coming out of the first two Democratic primary states, with Bernie Sanders leading in votes and Pete Buttigieg leading in delegates, who is "starting to dominate the national political debate like no one in the past five years other than President Donald Trump"?

According to NBC's Jonathan Allen (2/12/20), that's former New York City mayor, erstwhile Republican and billionaire Michael Bloomberg, who has won no national delegates and is currently polling in third place at about 14%. But inconvenient data never stopped anxious members of the media from inflating their preferred candidates' standing. 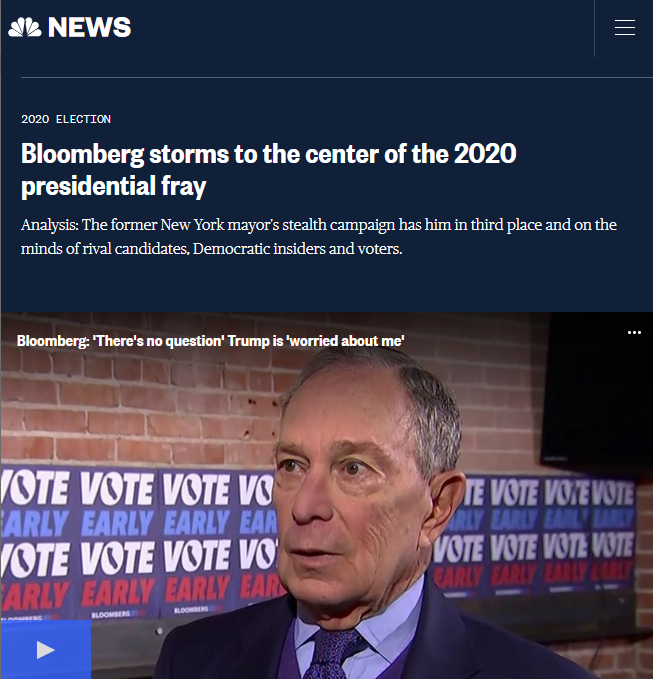 "Mike Bloomberg is starting to dominate the national political debate like no one in the past five years other than President Donald Trump," declared NBC's Jonathan Allen (2/12/20).

Before the New Hampshire results were even in, The Hill's Liz Peek (2/11/20) wrote that Bloomberg was the "likely winner" there, because of Biden's expected poor showing and the low national polling numbers for Pete Buttigieg and Amy Klobuchar:

In coming weeks, Democrats will make sure that Socialist Bernie does not get the nomination. More will realize that he will lead the party to a calamitous loss, and they will look for an alternative. Overwhelmed by ads, underwhelmed by others in the race, they will come to realize that Mike Bloomberg is the best they've got.

The New York Times similarly reported (2/12/20): "Unless such a favorite soon emerges, party leaders may increasingly look to Michael R. Bloomberg as a potential savior." This is because, the article noted, those leaders "view Mr. Sanders and his slogan of democratic socialism as wildly risky bets in a general election."

It was unclear who those leaders are, though, since the number of people quoted in the Times piece saying anything remotely positive about Bloomberg who are not directly tied to the Bloomberg campaign is exactly one. ("'The longer the waters are muddy, the better off Bloomberg is,' said former Gov. Jim Hodges of South Carolina, who recently backed Mr. Biden.") 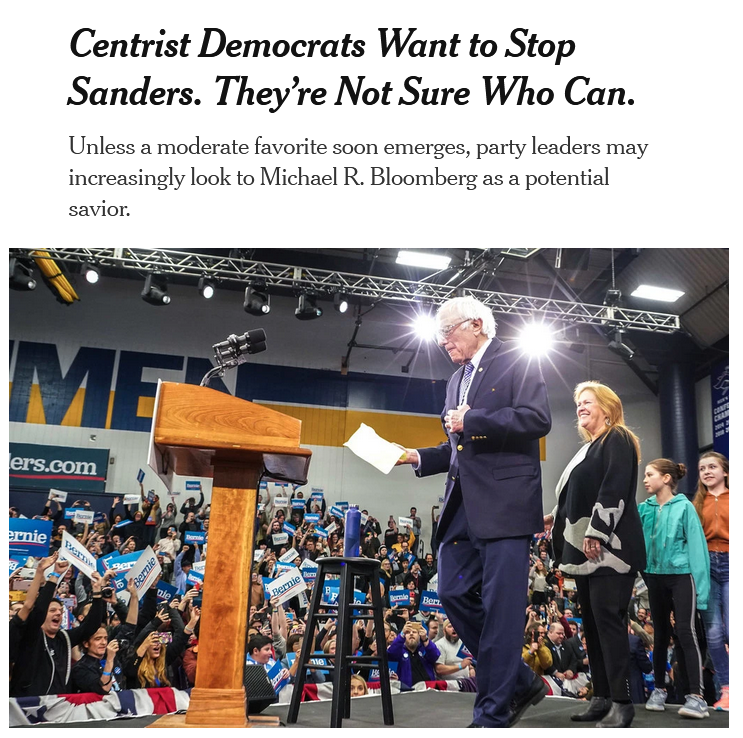 The New York Times (2/12/20) saw a need for a "savior" because  "Mr. Sanders could continue to win primaries and caucuses without broadening his political appeal, purely on the strength of his rock-solid base on the left" — though in polling, Sanders is by far the most popular candidate among Democrats.

That's not to say party leaders won't eagerly turn to Bloomberg — they're perhaps just not yet publicly vocal with their support for a billionaire candidate who was formerly the Republican mayor of New York City. There are, after all, many serious problems with his candidacy — among them his long record of misogynist comments and sex discrimination, and his only recently (and disingenuously) disavowed vocal support for a deeply racist stop-and-frisk policy that he dramatically expanded as mayor.

On top of a history that seems tailor-made to alienate the Democratic Party's core constituencies, there's Bloomberg's brazen attempt to purchase the presidency. A recent Times examination of his ad campaign (1/22/20) allowed that "many Democrats are angry that Bloomberg…seems to be trying to purchase their party's nomination" — though it pinned that anger on the idea that his campaign would just "prolong the Democratic contest and, in the end, produce a hobbled nominee," not that buying your way to the White House is fundamentally antithetical to democracy.

"But," the Times went on, "there is a plausible argument that Bloomberg's candidacy could be a boon to whoever faces Donald Trump in November." This boon is, the paper tells us, that most of Bloomberg's money is going into ads that attack Trump on his record, which may prove to be effective. So, really, who cares about that whole trying-to-buy-the presidency thing?

Not opinion-shapers at the nation's elite newspapers, it seems, where it's not hard to find pundits jumping on the Bloomberg train as Biden's star plummets. 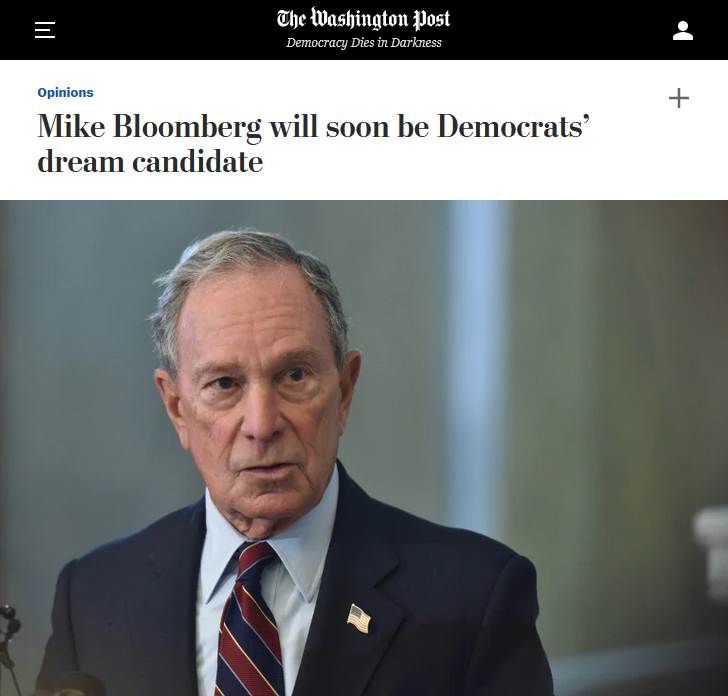 Inexplicable Republican Best Friend John Ellis (Washington Post, 1/11/20) recommends nominating Bloomberg because "he can buy every news adjacency on cable and local television stations from now until November and not make a dent in his net worth."

Never Trumper Jennifer Rubin evinced excitement (Washington Post, 1/28/20) about what she called the "'Bloomberg to the rescue!' plan for rational Democrats who understand that nominating Sanders would be political suicide for the party." Rubin worried that the centrists might not figure out a way to "block a rising Sanders":

That is precisely why Democrats might want to breathe a sigh of relief that Bloomberg is out there on the horizon, a kind of "break the glass in case of emergency" candidate. They just might need one.

John Ellis at the Washington Post (1/11/20) — perhaps best known as George W. Bush's cousin who called Florida for him at Fox News in 2000 — found Bloomberg so appealing precisely because of the "astronomical amount of money" he has to spend on the race:

If Democrats nominate anyone besides Bloomberg, they will be outspent in the general election by 2 to 1 or even 3 to 1. If they nominate Bloomberg, he will outspend Trump at least 5 to 1 and dramatically improve the party's chances of winning seats at every level of governance.

Ellis writes, with breathtaking obliviousness: "Trump's greatest vulnerability is the anxiety he creates. He makes people nervous. He makes his own people nervous. Bloomberg doesn't make anyone nervous. He's reassuring." Try telling that to the millions of innocent people — disproportionately young black men — terrorized by stop and frisk in New York. 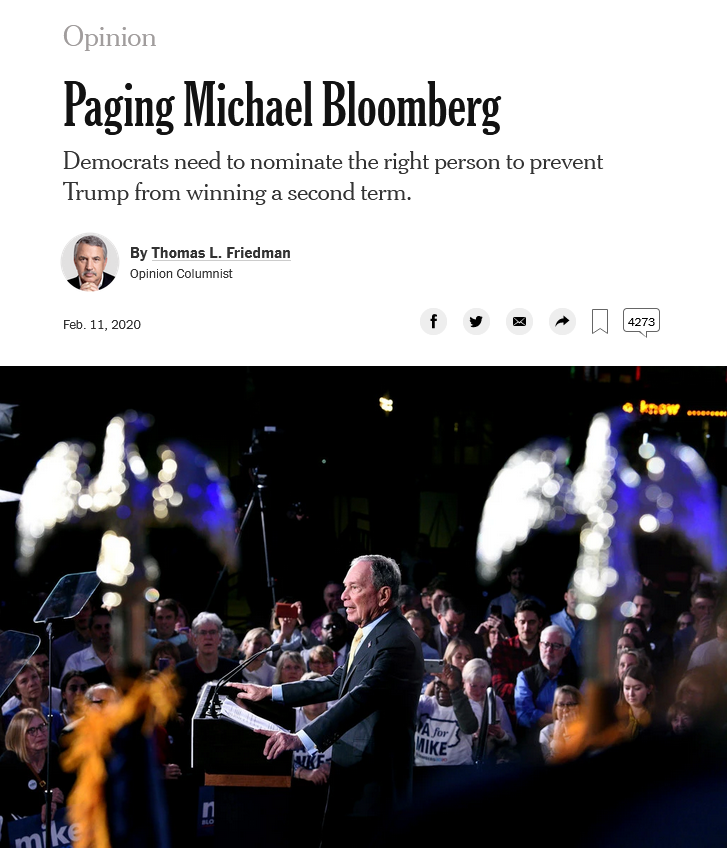 Thomas Friedman (New York Times, 2/11/20) on  Bloomberg: "While Trump was pretending to be a CEO on the show 'The Apprentice,' this candidate was actually building one of the most admired global companies as a real CEO."

Bloomberg-happy pundits seem to find it easy to erase such people and concerns, as the New York Times' Thomas Friedman (2/11/20) did when he counseled that Bloomberg "can hold the core Democratic base and also appeal to those same independents, moderate Republicans and suburban women in the key swing states." For Friedman, Bloomberg is simply "not always politically correct," and stop and frisk was nothing more than a "mistake … for which he recently apologized," and which has to

be weighed against a record of courageously speaking out and devoting enormous personal resources to virtually every progressive cause…. And he has vowed as president to focus on building black wealth, not just ending poverty.

It's true that Bloomberg has frequently spoken out. He's called for cutting Social Security (CFRB, 11/8/11), opposed minimum wage laws (Bloomberg, 7/29/15)  and spoke nostalgically of redlining (AP, 2/13/20) — the banking practice of barring loans to poor, mostly minority neighborhoods, the elimination of which he blamed for the 2008 economic crisis. In June 2017 ("The View," 6/21/17), he urged Americans to "get behind" Trump, because "the public has spoken, whether you like the results or not." (At the time, the major items on Trump's agenda were withdrawing from the Paris climate accord, pushing for a Muslim travel ban and working to dismantle the Affordable Care Act.)

Friedman, like Ellis, comes down in favor of Bloomberg because of, rather than despite, his money. He writes that while Klobuchar and Buttigieg also support centrist policies dear to his own heart, it's Bloomberg who "not only has a track record of supporting all those issues but also has the resources to build a machine big enough to take on the Trump machine."

This of course makes Friedman's disclosure at the end of his column particularly rich: "(Disclosure: Bloomberg Philanthropies has donated to Planet Word, the museum my wife is building in Washington, to promote reading and literacy.)"

Indeed, it's hard to find Bloomberg supporters who haven't been on the receiving end of some of the billionaire's largess. As ABC News reported (2/14/20), in recent years Bloomberg has funneled hundreds of millions of dollars, both directly and through various PACs and philanthropic programs, to Democratic politicians, many of whom are now endorsing him. This is occasionally noted — and even sometimes criticized — in media. But more often, those endorsements are reported without any mention of Bloomberg's patronage.

Take Georgia Rep. Lucy McBath, for instance, a member of the Congressional Black Caucus whose endorsement came at a crucial time for deflecting some of the damage from the leak of an audio clip showing Bloomberg blithely defending stop-and-frisk in 2015. ("Ninety-five percent of murders — murderers and murder victims — fit one M.O. You can just take a description, Xerox it, and pass it out to all the cops. They are male, minorities, 16–25.") McBath, ABC reported, has received individual donations from Bloomberg as well as more than $4 million from his gun control group, Everytown for Gun Safety. Reports of McBath's endorsement frequently left out this financial connection.

Meanwhile, George Will (Washington Post, 2/12/20), while acknowledging that Bloomberg's billionaire status and previous Republicanism might pose a problem for "fervid members" of the Democratic Party, brushed off Bloomberg's stop-and-frisk problem as a policy that "probably was more lamented by white liberals living in buildings with doormen than by minorities living in danger." 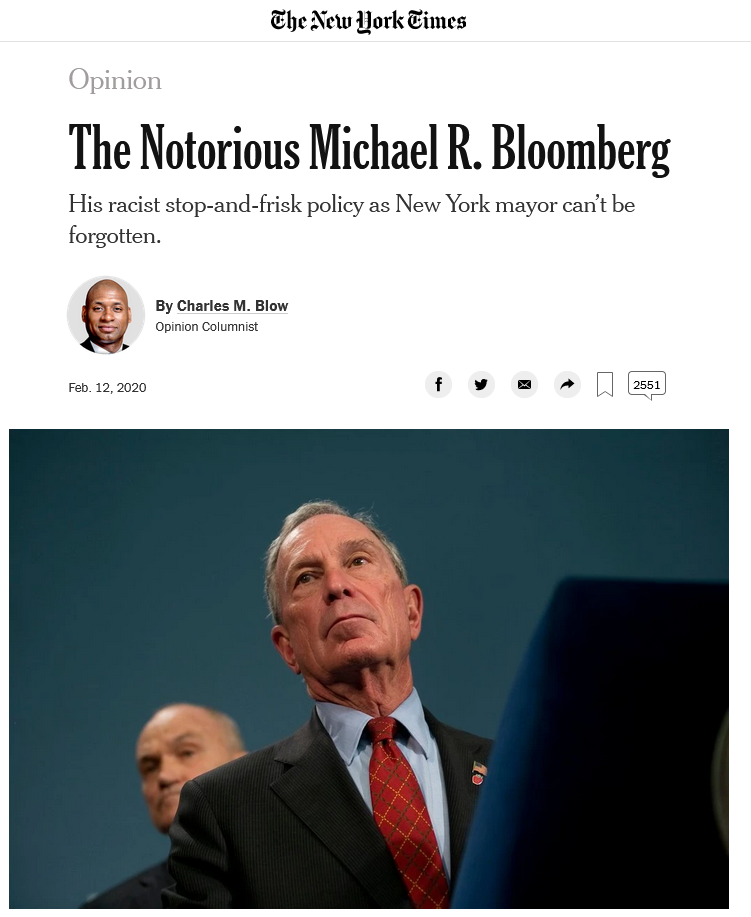 Charles Blow (New York Times, 2/12/20): "Bloomberg is blanketing the airwaves with slick ads and glamouring liberals into amnesia and acquiescence. These liberals are then openly gaming out scenarios in which Bloomberg is the last, best option."

Not all columnists — particularly black columnists — are so sanguine. Charles Blow (New York Times, 2/12/20) wrote a scathing column that attacked both Bloomberg's record and the "liberals … openly gaming out scenarios in which Bloomberg is the last, best option":

Let's state some facts: Michael Rubens Bloomberg notoriously expanded stop and frisk in New York City to obscene proportions, violating the bodies and constitutional rights of mostly minority men and boys, and not only defended the policy, but mocked his detractors and bragged about it.

What Bloomberg did as mayor amounted to a police occupation of minority neighborhoods, a terroristic pressure campaign, with little evidence that it was accomplishing the goal of sustained, long-term crime reduction.

Nearly 90% of the people stopped were completely innocent. He knew that. They were the collateral damage in his crusade, black and brown bodies up against walls and down on the ground, groped in the middle of the city by strange men with guns, a vast expanse of human psychological wreckage about which he couldn't care less.

Even the Post's Jonathan Capehart (11/11/19), who worked on Bloomberg's first campaign and believes "he would make an excellent president," called Bloomberg's campaign a "nonstarter" for African Americans because of his stop-and-frisk record — and argued that therefore, even if he were to manage to snag the nomination, his candidacy would suppress turnout and thereby throw the race to Trump.

It certainly appears some in the media would prefer that outcome to a Sanders victory, as their search for a savior continues.