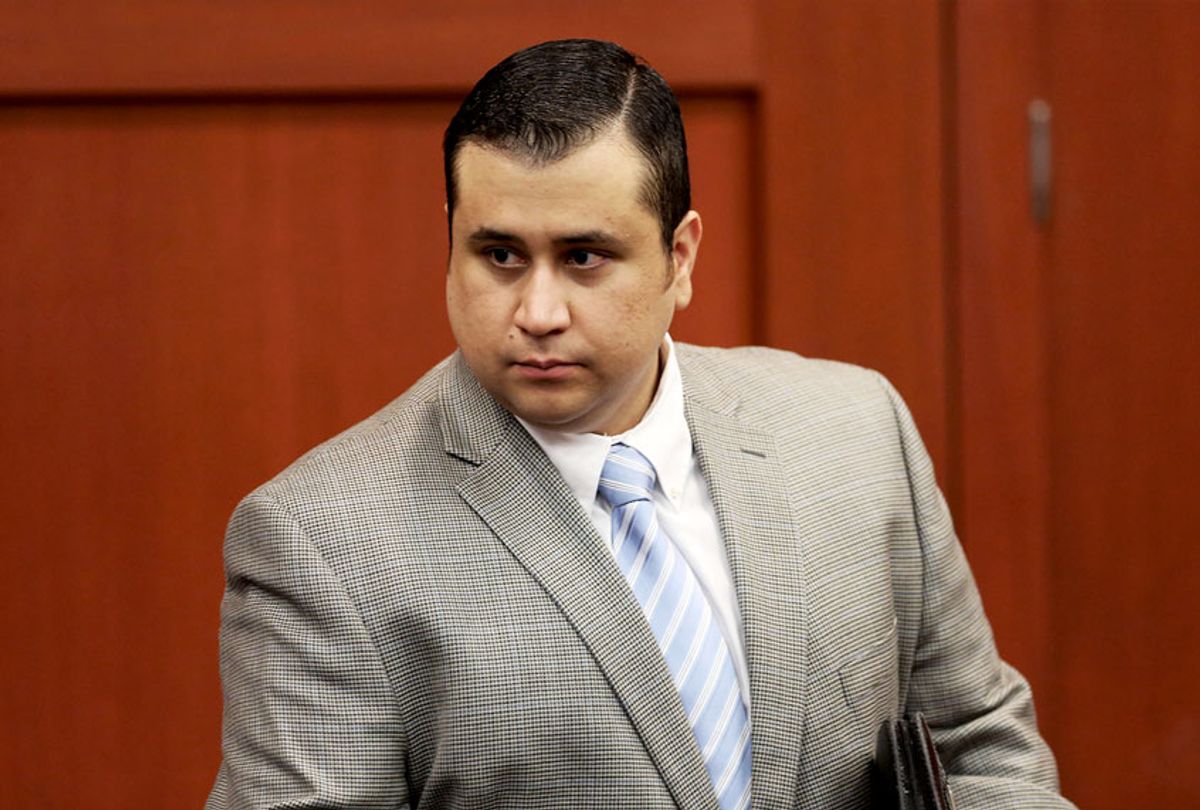 Defendant George Zimmerman arrives for his murder trial in Semimole circuit court July 11, 2013 in Sanford, Florida. Judge Debra Nelson has ruled that the jury can also consider a manslaughter charge along with the second-degree murder charge in the shooting death of Trayvon Martin. (Gary W. Green-Pool/Getty Images)
--

Zimmerman filed the lawsuit, which seeks $265 million from the two candidates, over tweets they posted on Feb. 5 — the day Martin would have turned 25.

"Trayvon Martin would have been 25 today," Buttigieg wrote. "How many 25th birthdays have been stolen from us by white supremacy, gun violence, prejudice, and fear? #BlackLivesMatter"

"My heart goes out to @SybrinaFulton and Trayvon's family and friends. He should still be with us today," Warren tweeted, referring to Martin's mother. "We need to end gun violence and racism. And we need to build a world where all of our children — especially young Black boys — can grow up safe and free."

The lawsuit, filed on behalf of Zimmerman by attorney Larry Klayman, the former head of the conservative legal activist group Judicial Watch, alleges that the tweets defamed Zimmerman by linking him to "white supremacy" in an effort to "garner votes in the black community." The suit also claims that the tweets used Martin's killing "as a pretext to demagogue and falsely brand Zimmerman as a white supremacist and racist to their millions of Twitter followers."

"Buttigieg defamed Zimmerman by claiming without any basis whatsoever that the Hispanic minority advocate and Obama supporter Zimmerman shot Trayvon Martin in cold blood due to his 'white supremacy,' a racist cause that is held in great disdain and consternation by the public," Klayman said in the lawsuit.

It also contains the allegation that Warren defamed Zimmerman by linking him to "racism."

The suit, which extensively relitigates the fatal shooting of Martin, seeks $265 million in damages for "loss of good will and reputation," as well as legal costs.

"It is high time that the cheap and harmful use of the race card by politicians of all stripes be made to cease and desist," Klayman said in a statement. "Their despicable 'race tactics' are not only causing great harm to persons such as my client George Zimmerman but also are damaging relations between black and white Americans who are all brothers."

Klayman accused both Buttigieg and Warren of trying to "manipulate black voters to win the 2020 Democrat presidential primary."

The lawsuit comes three months after Zimmerman and Klayman filed a $100 million lawsuit against Martin's family, their lawyer, prosecutors and others involved with the case, alleging defamation, abuse of civil process and conspiracy.

The suit accused the family and their lawyer of manufacturing a "fake witness" in the case against him.

Ben Crump, an attorney for Martin's family, rejected the earlier lawsuit as a "tale" that "defies all logic."

Zimmerman "continues to display a callous disregard for everyone but himself, revictimizing individuals whose lives were shattered by his own misguided actions," Crump said at the time. "He would have us believe that he is the innocent victim of a deep conspiracy, despite the complete lack of any credible evidence to support his outlandish claims."