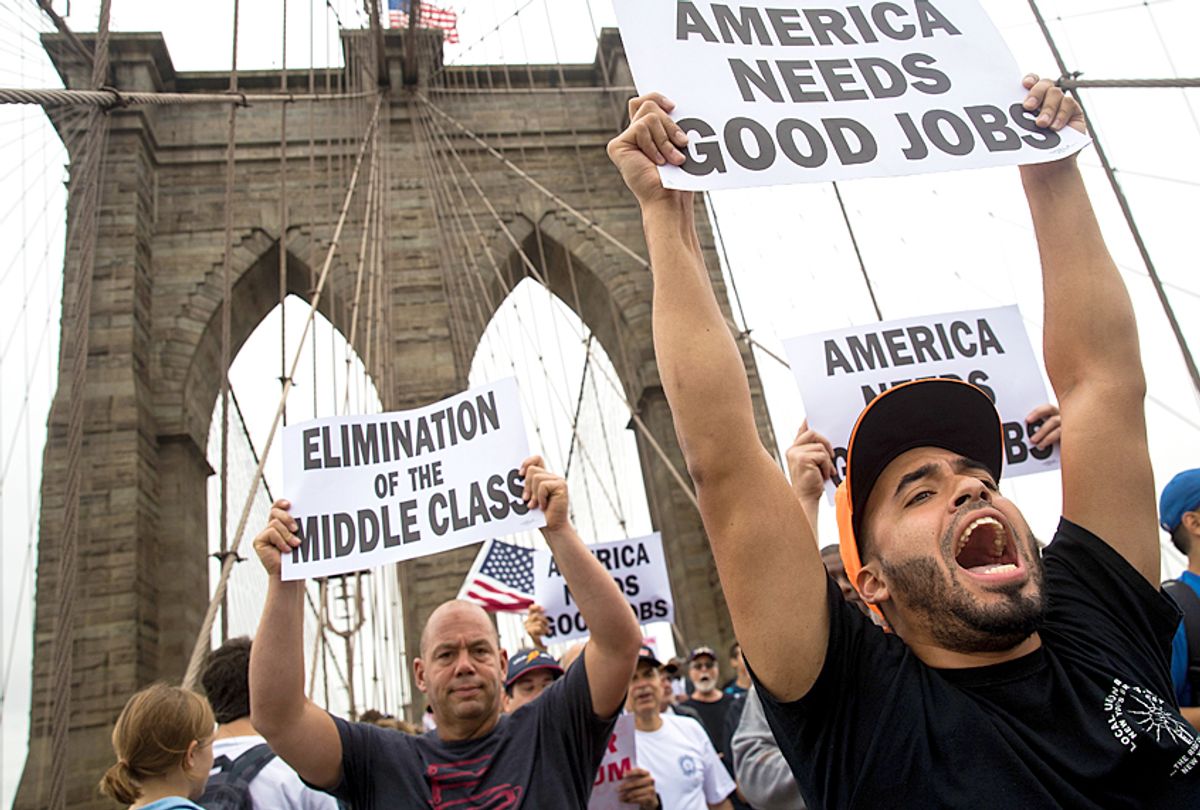 On February 5, the 775,000-member International Brotherhood of Electrical Workers announced that it was endorsing Joe Biden for president. It was Biden's biggest union endorsement campaign so far in his presidential campaign. This week, nearly 1,300 IBEW members who support Bernie Sanders sent a letter to union membership asking them to retract that decision.

The letter, from "IBEW Members For Bernie," blasts the union's leadership for endorsing Biden without a vote of members. "The leadership of the union had previously provided reassurance to the membership that they would trust the judgement of rank-and-file leaders and members to  represent their own interest in the 2020 presidential primary, and we are disappointed that the International has instead thrown their weight behind the Biden campaign without member consultation," it reads. The letter says that those who sign it support Sanders' "transformative vision for expanding the labor movement, as well as the democracy and the solidarity that his campaign embodies." It concludes, "We are calling on the International Officers to immediately retract their endorsement and call for the rank-and-file to participate in a democratic endorsement process by participating in an in person vote at their March local union meeting."

It is signed by more than 1,200 IBEW members from across the country, including dozens who identify themselves as officers or members of the executive boards of their locals. Signatures were still being added as of Monday night.

The existence of the letter is a result of the work of Sanders supporters within the IBEW, who began circulating it online and within local chapters shortly after the endorsement was announced. Mark Gardner, an engineer in Manchester, Connecticut and member of IBEW Local 457 who helped to organize the letter, said that it came in response to not just a disagreement over candidates, but also over the union's undemocratic process. "I have been frustrated with the trend of union leadership's endorsing the establishment candidates while rank and file votes generally go for Senator Sanders," Gardner said. "We do not want IBEW leadership to switch their endorsement to Bernie, but to open the choice up to the rank-and-file and hold a vote during the local unions' March meeting."

Another Sanders supporter, Joe Ellerbroek, a member of IBEW Local 347 in Des Moines, Iowa, echoed those sentiments. "I was outraged when I learned what the international had done. I felt there was too much at stake to just ignore it and hope for the best, especially when we have this rare opportunity to transform the whole dynamic of the labor struggle. Turns out I wasn't the only one," he said.

For Biden, whose campaign is flagging after disappointing finishes in Iowa and New Hampshire, union endorsements are a key firewall against charges that the platform of "Middle Class Joe" is not the most attractive for the working class. Biden has been endorsed by the firefighters union, the Iron Workers, and the Amalgamated Transit Union, but the 775,00-member IBEW is his biggest prize. The union did not endorse a candidate this early in the past two Democratic primaries. "It's not typical for the IBEW to endorse this early in the primary process," the union said in its endorsement, "but this year there's an urgency we haven't seen in a very long time. Energy policies made today will reverberate for decades, and it's paramount that we have a candidate for president who supports IBEW jobs and IBEW values." The IBEW has been publicly skeptical of the Green New Deal, the ambitious climate change plan that Sanders, but not Biden, has backed.

Neither the IBEW nor the Biden campaign responded to a request for comment on the letter.

In organized labor, as in society at large, the 2020 Democratic primary is exposing the deep, latent divide between the left and the establishment. The IBEW is not even the first union in the past week to experience an intra-union uproar pitting progressives against moderates—members of Unite Here who back Bernie Sanders circulated a similar internal letter for signatures last week after the Culinary Workers union in Las Vegas warned its members in ominous terms that Bernie Sanders wanted to "end" their health care plan. Already, both national and local unions are choosing sides in what amounts to a proxy war for the soul of the Democratic party. The ability of factions like the IBEW Members for Bernie to successfully exercise power against much more conservative union leadership will determine the posture of the entire labor movement long after the 2020 election is over.