"Star Trek": Watch Picard and Seven of Nine discuss their Borg past in this exclusive sneak peek

In this week's episode, the "Star Trek: Voyager" favorite lends a hand to the former Starfleet admiral 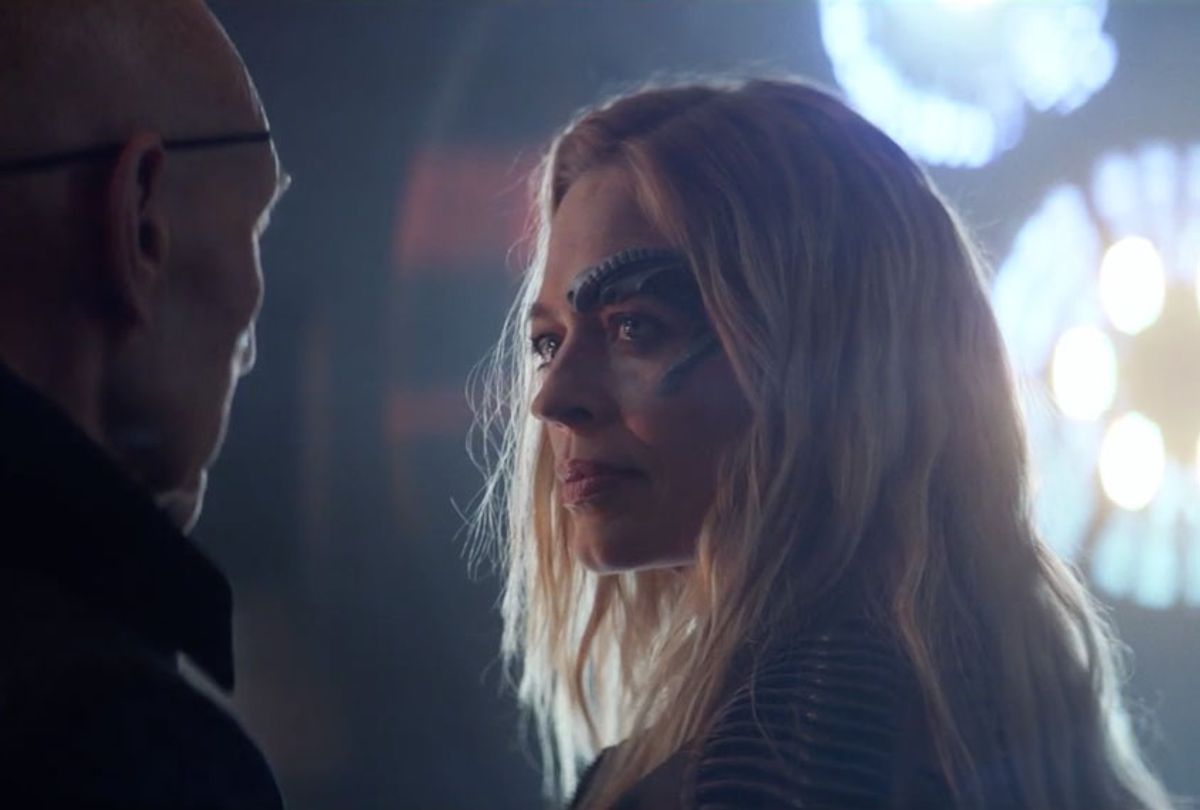 Spoiler alert: This story contains mild plot spoilers for the CBS All Access series "Star Trek: Picard." If you're not caught up, stop reading now. Or, you know, just skip to the video clip. It's an exclusive! Good stuff.

"Star Trek: Picard," the continuing 24th century adventures of the Trek universe's finest captain  – don't @ me, James T. Kirk cultists, not in the mood! – is nothing if not meticulous.

"Picard" blasts out of the gate with a premise that suggests the impossible, sending Jean-Luc Picard (Patrick Stewart) off on a quest to find the heretofore hidden daughter of his long gone confidante Data (Brent Spiner), an android. Yes, somehow Data "had" a daughter – two actually, one is dead – with the help of a scientist connected to artificial lifeform researcher Agnes Jurati (Alison Pill), who tags along with Picard.

He needs all available assistance, because apparently in the 14 years since Picard's retirement from Starfleet, the universe has gotten markedly more dangerous.

Corrupt Federation members are working with nefarious Romulans to reassemble a dead Borg cube (otherwise known as The Artifact), and somehow the remaining daughter Picard never knew Data had, Soji (Isa Briones), is involved. Operating in the shadows are agents of the Tal Shiar, a sect of fearsome Romulan spies. This is all part of a conspiracy behind an event that led to the total ban of synthetic lifeforms – and Soji is a synthetic in the middle a Borg vessel. None of this is good.

As "Picard" lays out these complex stakes over its opening four episodes, the series also introduces the retired Starfleet Admiral's crew one by one.

In the third episode their off-the-books mission brings them to the Romulan-controlled planet Vashti where Picard scoops up Elnor (Evan Evagora), an expert fighter trained by warrior nuns and, as it turns out, the show's social media-certified legit snack. Principled and honest to the point of naïvete, Elnor pledges his very sharp sword to the service of Picard's cause.

That's all good and, when it comes to Elnor, super fine. However, in answer to any "Star Trek: The Next Generation" viewers getting impatient to see the rest of Picard's O.G.s finally assemble, last week's episode closed with the very woooooot-worthy surprise appearance of a highly skilled pilot who arrives just in time to save Picard's bacon – and is none other than "Star Trek" fan-favorite, former Borg drone Seven of Nine (Jeri Ryan).

Much of "Star Trek" revolves around questions of ethics and moral quandaries, but central to the story of Picard and this series is the question of what it means to be human. In "TNG" the Borg assimilated Picard for a time, leading him to wrestle long afterward with the definition of humanity.

Though Seven of Nine was introduced on "Star Trek: Voyager," her brief interaction with Picard in the fourth episode tells us that she's at least as famous as he is . . . although for different reasons. "Picard" Episode 5, "Stardust City Rag," reveals a Seven of Nine changed and hardened over the years and a woman operating from her own very solid definition of what it means to be human, as is hinted in this preview clip made exclusive to Salon below: