Tommy Wiseau for president? The cathartic appeal of imagining a reality that will never happen 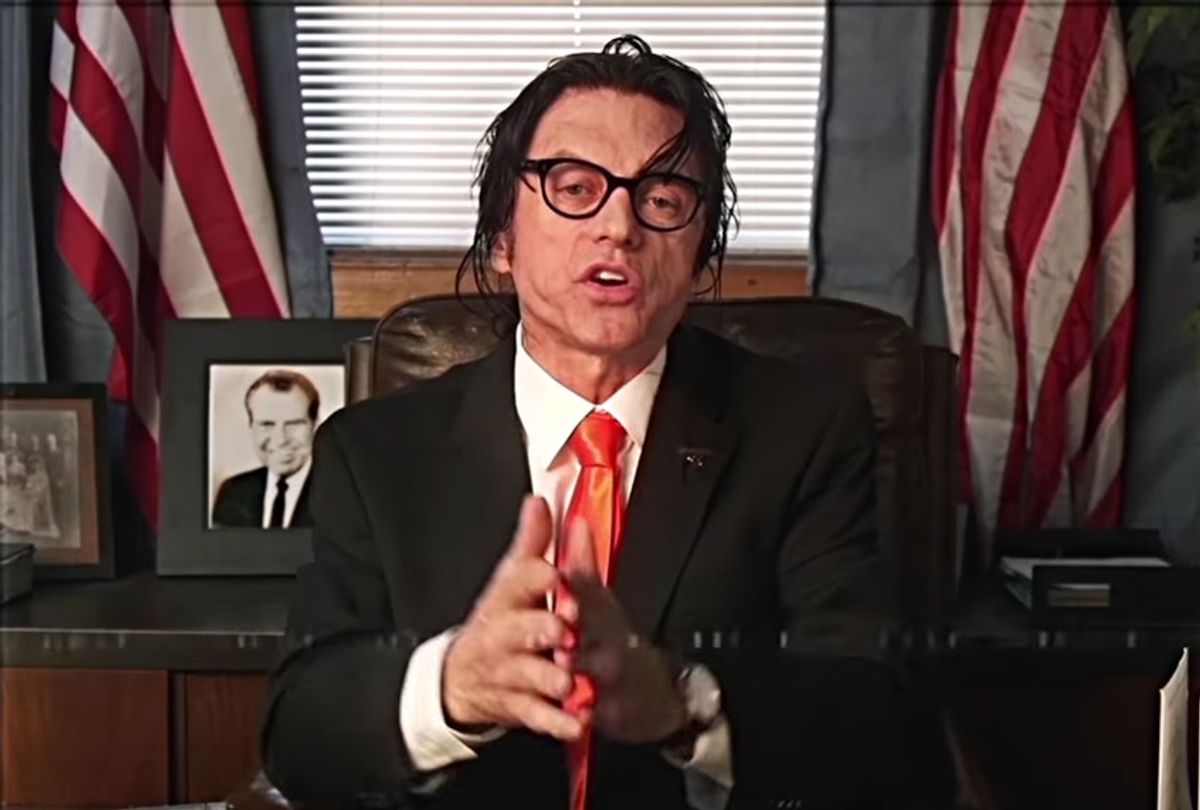 Leading up to President's Day, actor Tommy Wiseau posted several photos across his various social media platforms of him in the role of president. Some of these are clearly the result of shoddy Photoshopping, like a Facebook portrait that shows his character Johnny from the blithely bad 2003 film "The Room," sitting behind a desk in the Oval Office — flanked by accoutrements from the movie like a dozen roses, a football, and a framed photo of his costar Juliette Danielle.

Another photo is a screengrab from a 2017 YouTube video "A Special Message from The President of America (Tommy Wiseau)," which was produced by the "geek- and gaming-related merchandise" subscription box service Loot Crate. It's a weird, garbled 90 seconds, in which Wiseau — who has donned a bright orange tie and slicked his jet-black hair into a stringy ponytail — communicates to the American public that "for thousands of years, alien robot cars have lived among us, but they have been hiding until now."

Then there's another one of him standing behind a podium on a White House film set, his arms outstretched and his mouth wide open, ostensibly mid-speech.

As "The Room" has ascended to cult classic status over the last 17 years, propelled in part by James Franco's "The Disaster Artist," which fictionalized the making of the movie, Wiseau has accumulated a devoted fan base; so naturally, there were enthusiastic, if largely ironic, responses to these photos. "My president," one commenter wrote, while another responded, "I would vote for you in a heartbeat!"

In combing through the graveyards of the internet, I found out that this isn't the first time the topic of a Wiseau presidency has been thrown around. There are abandoned Facebook groups for "Tommy Wiseau for President" during the 2008, 2012 and 2016 election cycles. There are archived Reddit threads that speculate how he would respond to whatever were the pressing political issues at the time.

Often the theories lapse into quotes from "The Room" (Wiseau, at times, is truly inextricable from the character of Johnny) like this imagined exchange: "'Mister President, it's time for the summit meeting with Kim Jong Un. Do you have anything to say to the South Korean press?'" a government official asks. "Tell them to leave their stupid comments in their pockets," Wiseau responds.

But there are thousands of comments like this, more than I could have ever anticipated.

Social media users have nailed down Wiseau's economic platforms ("Don't plan too much, it may not come out right"), how he would deal with foreign leaders, how he would speak to constituents, his thoughts on Jeffrey Epstein's death. As the 2020 election draws closer, the frequency and specificity of these comments have only increased, almost like a group speculative fiction project, which made me wonder, "Why are they so consumed with a presidency that could never happen?"

I should note that I don't mean this in the sense that the idea of a Wiseau presidency is so absurd — that he is so obviously unqualified and personally laughable — that the American public wouldn't vote for him; we're already living through the fallout of a similar theory. What I mean is that, while there is a lot of mythology surrounding where Wiseau was born, he wasn't born in the United States. Barring a constitutional amendment, a Wiseau presidency would run afoul of the requirement that "[n]o person except a natural born citizen . . . shall be eligible to the office of President."

"America is going through some really dark times right now, and sometimes just posting a current news article on that page with a quote from 'The Room' or something kind of helps me cope with the absurdity of what's going on right now," Rubinow said. "And hopefully makes a few people laugh."

Rubinow clarified that he's not in any way truly advocating for a Wiseau presidency, but he has given thought to what it would look like.

"[It] would probably be chaotic, like the current Trump administration, but a million times less divisive and more moral than the current administration," Rubinow said. "I don't think Tommy would be beholden to huge corporate interests . . . I think he might actually want to work for the American people, not the super wealthy and Washington elites."

Taking this thought exercise a step further, Rubinow also doesn't think that Wiseau would "try to justify keeping kids in cages or would actively begin working to dismantle regulations that protect drinking water and national parks."

"This is all just based off how I  perceive Tommy, though," Rubinow said. "I met him at a screening of 'The Room' years ago. He was a super nice guy. I don't know his opinions on political issues, and I get the impression he maybe wouldn't want to share those as he prefers to keep private about a lot of stuff, but I think it would be fascinating to have a conversation about politics with him sometime."

M.L. Clark, a science fiction and fantasy writer who has a background in 19th-century scientific fictions, says that we have always told stories to try to get a lock on the world we're living through, and maybe offer clarity as to next steps.

"The sub-genre of speculative fiction that these 'Tommy Wiseau political groups' seem to be drawing on is alternative history, and what alt-history offers that fiction claiming to be 'realist' cannot is a safer remove to negotiate what we sometimes struggle to articulate using real-world examples," Clark said.

For example, Clark said, there might be heated animosity between Sanders and Warren supporters, but by using a careful analog in fiction — like a speculative democratic contest between two fictional characters — we might give ourselves enough breathing room to address underlying philosophical and policy issues that never seem to come up in real-world debate.

More formal, full-length examples of this practice can be found in films like Mike Judge's  "Idiocracy" (2006) and in the 2017 Sam Bourne book "To Kill a President." Speculative analogs to current events like these can — and often primarily do — serve as excellent release valves, like Rubinow said, from the pressure of negotiating current politics.

But, Clark cautions, we would do well to remember that escapism isn't meant to be an end-result.

"Today's endearing Wiseau-for-president crowd is simply using stories as our species always has," Clark said, "to come to terms with who we are, what we've wrought, and what might await us if we and our cultures continue along their current path."