Did Trump try to bribe Julian Assange with a pardon? Well, he won't be impeached over it 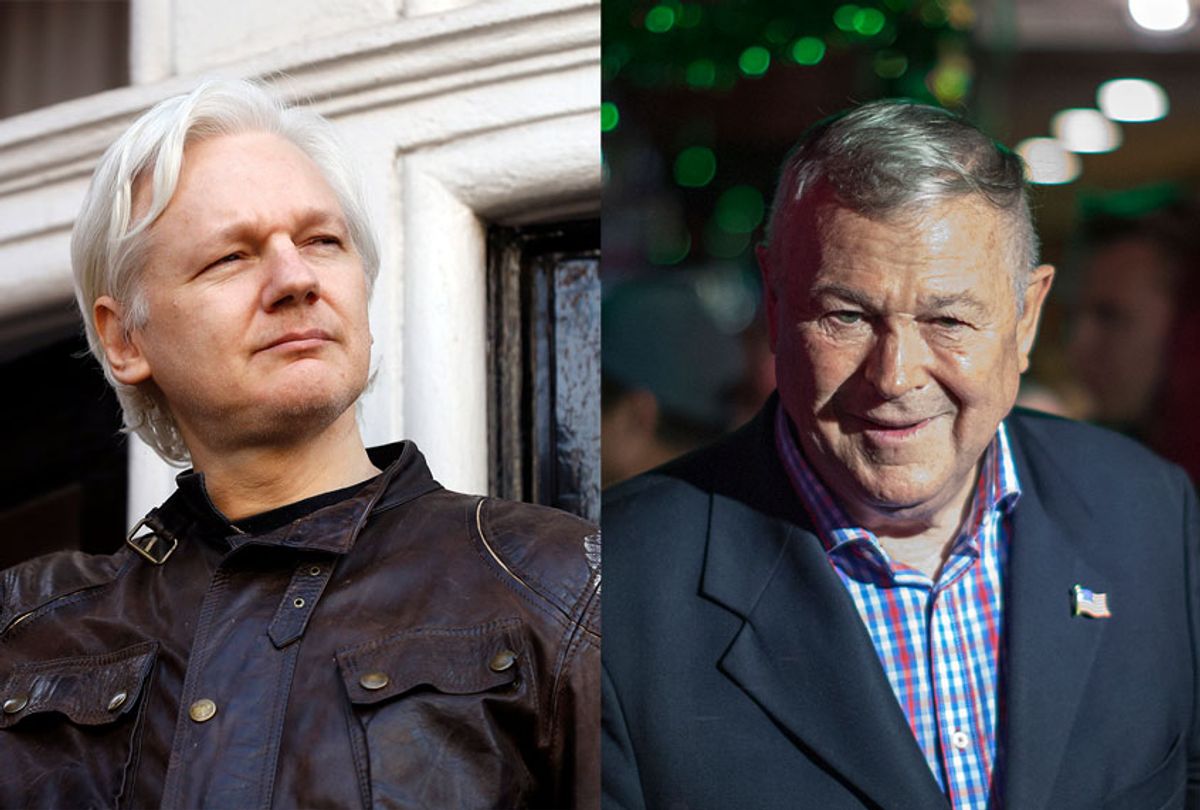 Surprising no one, we learned this week that Donald Trump apparently offered WikiLeaks founder Julian Assange a pardon in exchange for aiding in Trump's cover-up of the Russian military's hacking and theft of emails from the Democratic National Committee in 2016.

According to a bombshell report in The Daily Beast, Assange's lawyer, Edward Fitzgerald, made this assertion in a London courtroom, an action rarely taken unless there's some sort of evidence to prove it. Former Rep. Dana Rohrabacher — a California Republican with close ties to Russia — was Trump's designated errand boy in the plot, which took place in 2017.

A statement from Assange's team described, in part, "Mr Rohrabacher going to see Mr Assange and saying, on instructions from the president, he was offering a pardon or some other way out, if Mr Assange ... said Russia had nothing to do with the DNC leaks."

If this story sounds familiar, it's because we already knew about it. Back in September 2017, the Wall Street Journal reported that Rohrabacher met with Assange in the Ecuadorian embassy in London, where Assange had been granted asylum. The deal, we're told in both accounts, included a request to have Assange lie about the culprits of the DNC hack, suggesting it was a non-Russian collective of hackers, unrelated to the GRU. If this sounds like the early origins of the Ukraine plot, you're probably not wrong, since a full half of Trump's Ukraine gambit was about laying the blame for the DNC hacking on Kyiv's doorstep, or literally anywhere else besides on Vladimir Putin.

As for Rohrabacher, there's at least one photo of the then-congressman outside the Ecuadorian embassy, alongside far-right troll Chuck C. Johnson. You might also recall a story in which current House Republican leader, Kevin McCarthy blurted something into an open mike about how Putin pays two prominent Republicans: Rohrabacher and Trump. McCarthy later said it was a joke. Uh-huh. Sure it was.

The only thing we can say these days about Trump and his copious linkage to Russia is that it's "Chinatown, Jake." Irrespective of what happens or what new evidence emerges, Trump's actions are neither prosecutable nor impeachable.

Attorney General Bill Barr, who's become nothing more than another goon in Trump's junk drawer of fixers and henchman, has made it clear that he's in full agreement with the Office of Legal Counsel memo that forbids the prosecution of a sitting president. Robert Mueller also abided by the OLC's judgment. So no indictment of this president will happen — not based on this story, not based on anything — unless Barr suddenly resigns. Trump can absolutely shoot a guy on Fifth Avenue without being held legally accountable while in office. Likewise, the odds of a second impeachment for further crimes that might come up in the next 11 months are less than zero. No president has ever been impeached twice, especially not within months of the first attempt. (The OLC did, however, rule that a president can be prosecuted for the same crimes for which he was impeached and acquitted, but only after he leaves office.)

Even if everyone involved, including Assange, Rohrabacher and Trump himself, all stepped out tomorrow and confessed to every word of what's been reported so far, the Republican Party would not convict Trump for illegally selling pardons. Duh. And by the way, Trump's already been accused of selling pardons once this week, and there's zero reason to give him the benefit of the doubt on any of this. Nevertheless, any and all Trump crimes, including this one, between now and the triumphant moment a new president is sworn in, will be summarily laughed off by Trump's fanboys on Capitol Hill. Why? Because they're all terrified and impotent, quivering in the ponderous shadow of Trump. That, and anyway all his crimes "own the libs."

Perhaps the most staggering aspect of the entire Trump-Russia fiasco is that we know for a stone-cold fact that Trump is swimming, Scrooge McDuck style, in an ocean of Russian money. How do we know this? Eric Trump, for one, admitted it. Donald Trump Jr. has admitted it, too. The president himself, prior to running for office, had an entire history of business dealings with Russia, culminating with the infamous Trump Tower Moscow project, which required Putin's personal approval. As part of the deal, Putin would have reportedly been gifted the $50 million penthouse, but as we all learned in 2019, that deal went on the back burner when it became clear Trump would be the Republican Party's nominee for president.

Consequently, Trump, as president, is acting in almost exclusive support of Russia in order to protect his money and his business deals, at the very least. Such dependence on Putin's good graces have irreparably compromised Trump's ability to make rational decisions in support of U.S. national security. And that doesn't even factor into the equation details about possible money laundering and other schemes involving Trump's connections to Russia and its oligarchs.

Yet, in the face of it all, we're still accosted with confounding question marks and denialism about whether we actually face a serious national security crisis involving a president who's acted in support of Russia over our national interests, not to mention the interests of our NATO allies and the new, reformist Ukraine government. I suppose the sheer volume of information — the flooding of the zone, the firehose of news — allows details like the Assange-Rohrabacher meeting and so many other news items, many of which include evidence and sworn testimony, to get flushed down the memory hole.

Perhaps so many of our fellow citizens are afraid to fully confront the crisis staring us in the face: the real possibility that our president isn't the anthem-conducting patriot he pretends to be, and is instead an obvious crook who's owned by the Kremlin, acting on its behalf. We're free soloing now, and there's nothing below but the abyss. How do we deal with a truly despotic tyrant in the White House when the strictures of the Constitution, the safeguards we expected to be there, have been pulled out from beneath our feet?

There's literally no one else, for now, standing between us and a president who's selling pardons while selling out his country to protect his own whiny ass — not the Justice Department, not Congress and not the 25th Amendment, which was always kind of a forlorn hope anyway. It's literally down to you and me. It's down to the American voters to rise up and become the heroes in this dark ride. The only way out is to overwhelm the vote — to humiliate Trump and his Red Hat cult on Nov. 3. So how about we do that, huh? Until then, the ongoing Russian attack on our democratic institutions and Trump's not-so-mysterious support for Moscow is a matter of record and, yes, a matter for the history books. That'll have to do for now, thanks to the most sinister and damaging cover-up in presidential history.