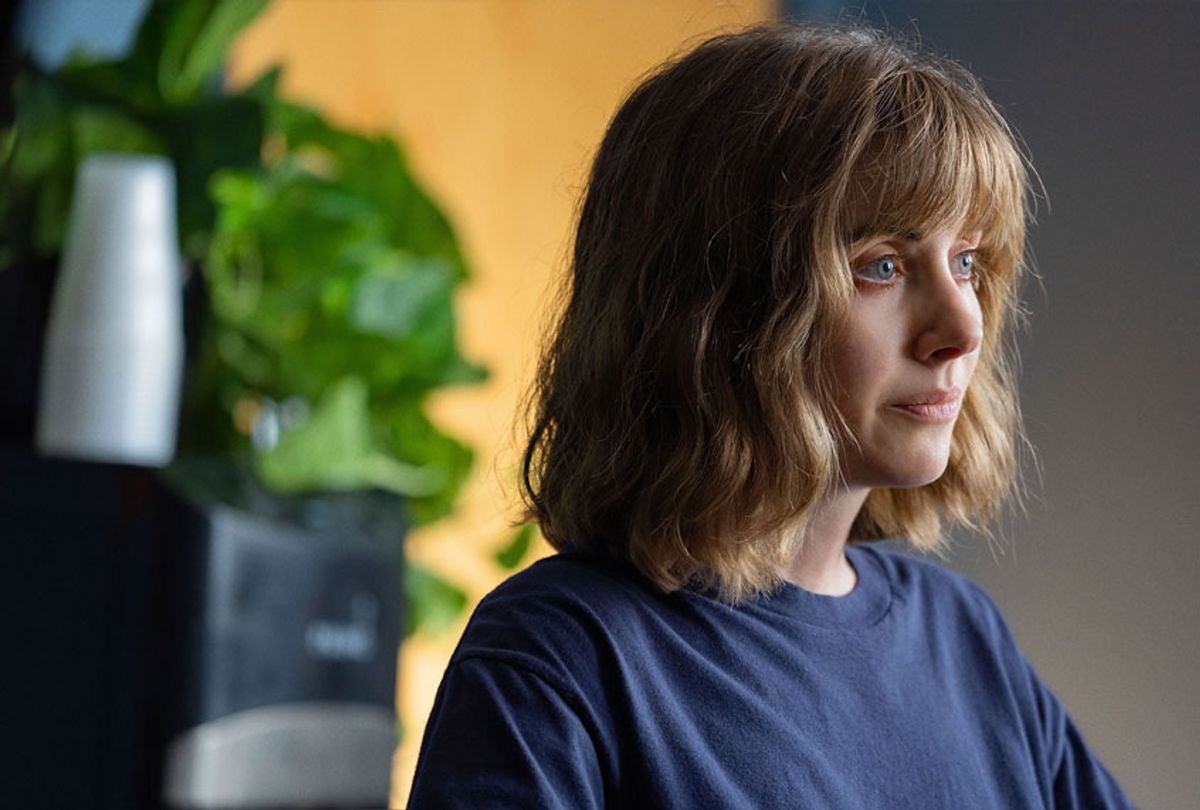 Sarah (Alison Brie), the protagonist of the Netflix film "Horse Girl," has a predictable schedule. She goes to work at a small-town arts and crafts store, she visits the local stables where she watches the horses, she goes to Zumba, and the she unwinds — alone — every night with her favorite supernatural television program, "Purgatory."

"I just think, like, she maybe doesn't go out," Sarah's roommate says of her. "Like hang out with people a lot, but she's so nice."

Sarah's isolation permeates "Horse Girl" in small, but telling ways. Her mother died a year prior, and Sarah spends a lot of time sitting silently at the gravesite. She tries to work up the courage to ask some of the women in her Zumba class to spend her birthday with her, but ultimately falters. Steadily, her focus shifts more and more inward — as she obsesses over her ancestry and her uncanny resemblance to her grandmother — before Sarah seems to break from reality entirely.

From there, "Horse Girl" evolves into a lightly dark psychological thriller, and cements itself as part of a recent trend of filmmakers turning the lens on what loneliness looks like for women, specifically the kind that is removed from romantic associations.

Don't get me wrong. There have always been films about women who are lonely and then meet a man — or in the style of Bette Davis' "Now Voyager" or Audrey Hepburn's "Sabrina" undergo a change that allows them to meet a man — who then cures them of their feelings of self-doubt or social rejection.

But films like "Horse Girl" are different; the kind of loneliness shown is less a hunger for romance that needs to be satiated. Instead, it's a constant, quiet gnawing feeling that, when left untended, can serve as a catalyst for imaginative, empathetic (and sometimes disturbing) depictions of womanhood and mental health.

I think of movies like "Tully," a 2018 film directed by Jason Reitman and written by Diablo Cody. Charlize Theron stars as Marlo, a suburban mother who is about to give birth to her third child. Her husband, Drew, is incredibly loving, if a little clueless about how strenuous motherhood can be. Marlo's wealthy brother offers to hire a "night nanny" for the couple, a childcare specialist who care for newborns during the overnight hours to allow exhausted parents some uninterrupted rest.

Initially Marlo declines; she doesn't want to share her home and the newborn bonding time with a stranger. But as she becomes more and more rundown — and begins to feel increasingly isolated — Marlo makes the call. That's when Tully (Mackenzie Davis) arrives.

Tully is a 26-year-old manic pixie dream girl, of sorts, built from literary references, vaguely spiritual musings, and sexual energy. Marlo is drawn to her as a person, but more than anything, is drawn to what seems to be Tully's fulfilling life. As Marlo's own dissatisfaction with being separated from the reality she used to know comes into clearer focus, she — like Sarah from "Horse Girl" – seems to separate from her current reality.

"Tully" isn't a flawless script. There are times — like when Marlo parties, drunkenly wrecks her car, and allows Tully to have sex with Drew, all seemingly without consequence — it feels like the worldview of the film may be too self-contained, and that its exploration of post-partum depression is too tepid.

But then comes the suggestion that Tully isn't actually real; she is either a figment of Marlo's imagination entirely, or perhaps a version of Marlo herself, the woman she would have continued to be if the demands of motherhood hadn't proved to be so isolating.

The film's drama and mystery hinge on how difficult it is to cope with the gulf between her and the rest of the world.

"Greta," Neil Jordan's 2018 film starring Isabelle Huppert and Chloe Grace Moretz, is a thriller that navigates that abyss in a different way. Huppert stars as Greta Hideg, a widow whose paralyzing loneliness following her daughter's suicide sparks her obsessive desire to find a replacement child. She lures young women, like Mortez's Frances, by "accidentally" leaving purses with her address written inside around the city in hopes that whoever finds them will feel compelled to return them.

All three of these movies depict how loneliness can dovetail with mental illness — how one may inform, precede, and feed the other. For those who haven't experienced either, these films may feel alien or overwrought. But for many, they will feel familiar; and as more films contend with what loneliness looks like, who it affects, and its outcomes — especially in an increasingly digital world where there is potential to feel deeply disconnected from human interaction — the more potential to see who in our lives may be struggling by themselves.