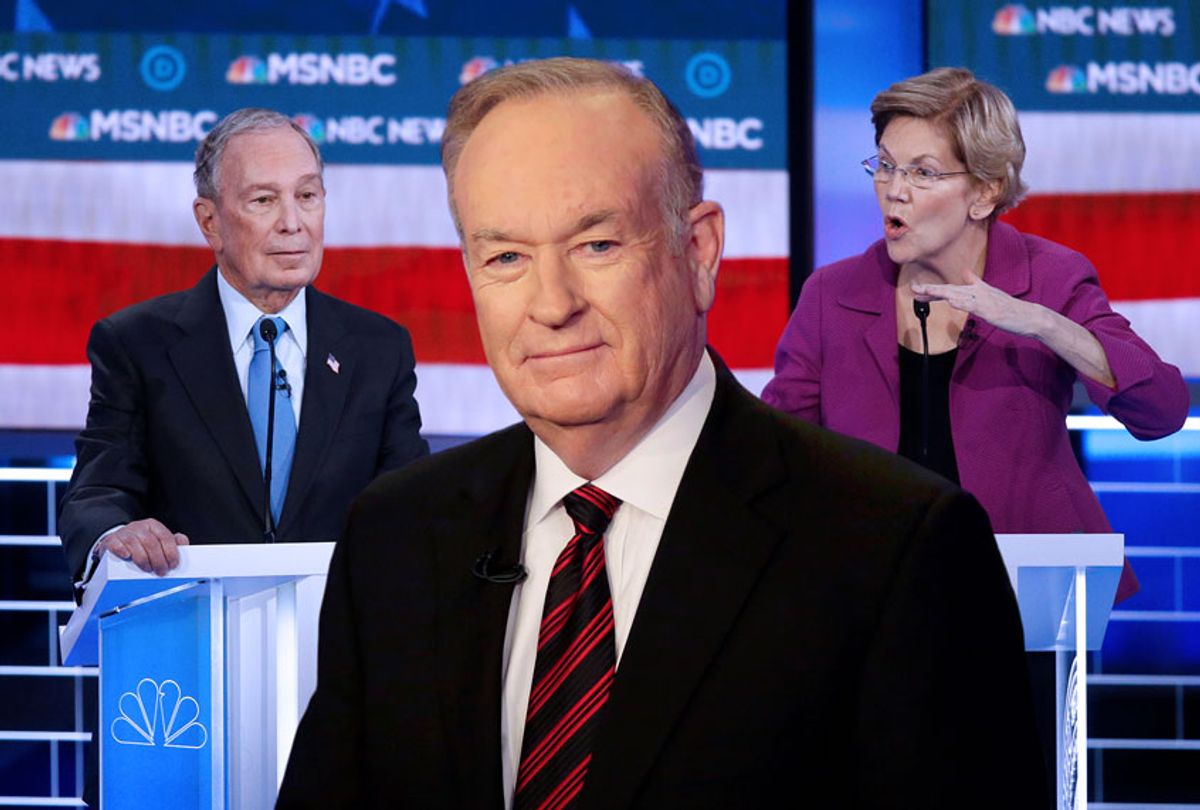 Former Fox News host Bill O'Reilly appeared to at least momentarily forget the skeletons in his own closet Wednesday when he bashed former New York City Michael Bloomberg for looking "weak" as he pushed back against attacks over non-disclosure agreements with former women employees.

During Wednesday night's debate, Sen. Elizabeth Warren, D-Mass., confronted Bloomberg as he attempted to defend himself against allegations of sexual harassment in the workplace.

"In my foundation — the person that runs it is a woman. Seventy percent of the people there are women. In my company, lots and lots of women have big responsibilities," Bloomberg told Warren. "They get paid exactly the same as men."."

"I hope you heard what his defense was: 'I've been nice to some women.' That just doesn't cut it," Warren retorted.

After saying that many women who worked for Bloomberg had signed "non-disclosure agreements both for sexual harassment and for gender discrimination in the workplace," Warren asked the billionaire if he would release them from those contracts.

Bloomberg replied that here were only "a very few" nondisclosure agreements, prompting Warren to ask exactly how many exist.

"Are the women bound by being muzzled by you and you could release them from that immediately?" Warren asked. "Because, understand, this is not just a question of the mayor's character. This is also a question about electability."

Bloomberg, who was also confronted on the matter by former Vice President Joe Biden, responded: "We're not going to end these agreements, because they were made consensually. And they have every right to expect that they will stay private."

It was ironic for O'Reilly to criticize Bloomberg over non-disclosure agreements given his own history at Fox News, where he was fired in 2017 after The New York Times revealed that "a total of five women who have received payouts from either Mr. O'Reilly or the company in exchange for agreeing to not pursue litigation or speak about their accusations against him. The agreements totaled about $13 million."

Lawyer Lisa Bloom, who represented an O'Reilly accuser named Dr. Wendy Walsh, claimed at the time that there were at least 30 women who had filed sexual harassment complaints against a network accustomed to paying out multi-million dollar settlements in exchange for silence.