Mike Bloomberg's campaign landed with a big splat in Vegas. Some reporters pretended they couldn't see it 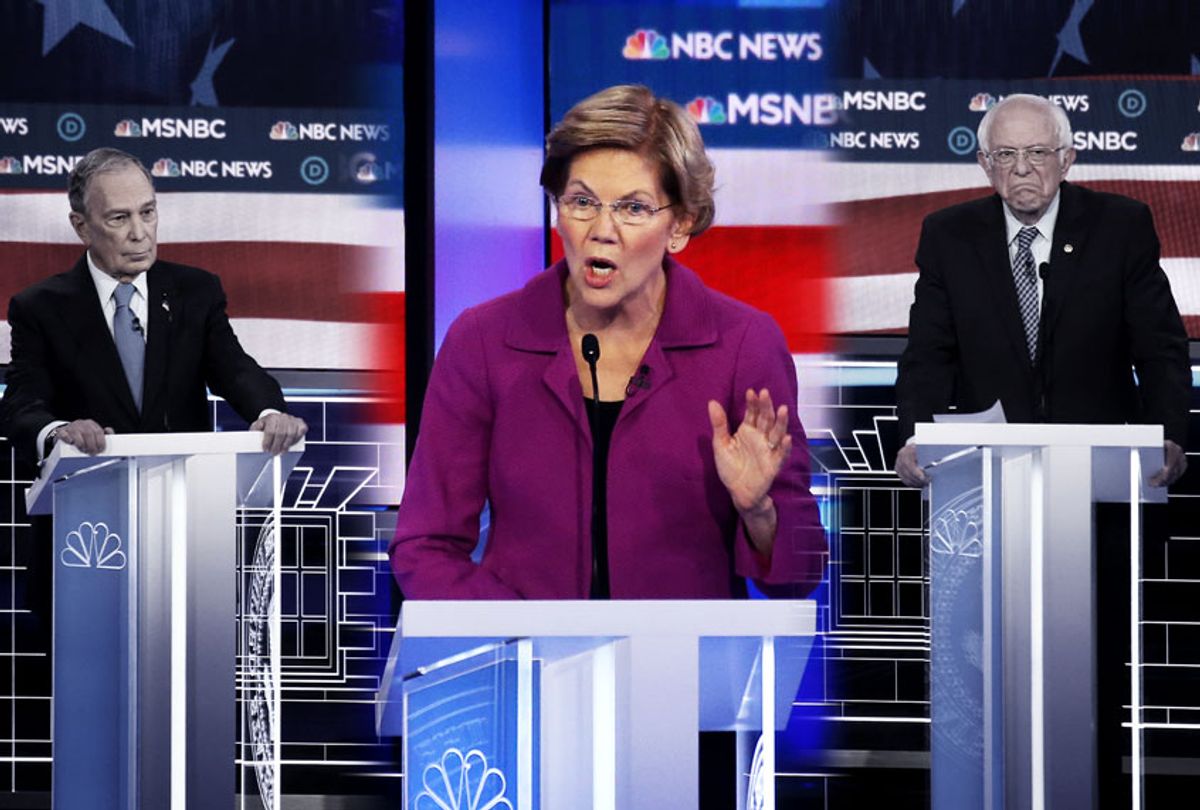 Something absolutely amazing – even cinematic! — happened Wednesday night in Vegas. It was the behind-the-curtain reveal from "The Wizard of Oz." It was "Titanic" hitting the iceberg.

Oh, and it was a bit of Linda Hamilton crushing "The Terminator," too. Elizabeth Warren was on offense.

That's plenty of drama to satisfy even the most jaded political journalist, you might think.

But the lead stories from top newsrooms, including the Washington Post, the New York Times and the Associated Press, were oddly muted about Bloomberg's reduction to rubble. They were equally focused, if not more so, on something else entirely: Whether Bernie Sanders can be stopped.

Bloomberg and Sanders were both on the defensive, these outlets insisted — under flat headlines and dull ledes.

And I didn't really understand why until I read the analysis by Washington Post "chief correspondent" Dan Balz, arguably the dean of the elite political press corps.

Balz didn't mention Bloomberg in his first paragraph. Instead, he wrote about the "sense of urgency that time is running out" for everyone in the Democratic field except Sanders.

These unsourced, unrebutted, passive-construction assertions by Balz, to my mind, are a window right into the thinking of the people running our top newsrooms:

Sanders's rise has raised fears that, if he were the nominee, his brand of democratic socialism could doom the party to defeat against President Trump, along with many candidates for House and Senate.

One measure of how rapidly things are changing is this: In barely a week, the question has shifted from whether Sanders has a ceiling, based on the fact that he managed just a quarter of the vote in both Iowa and New Hampshire, to whether he can be stopped.

That phrase — "the question has shifted" — is just horrific journalism.

Anyway, it all comes down to Bloomberg, Balz wrote:

Some Democrats see Bloomberg as the one candidate who could sell better in a general election, and there have been suggestions that the time is coming for the party to coalesce around him.

Those "some Democrats" — whom Balz eventually identifies as "Democratic Party strategists" — believe "that only Bloomberg has the resources to compete as broadly on Super Tuesday and beyond as Sanders."

So, if that's the elite political journalist mindset — that "the question" is how can Sanders be stopped, and Bloomberg is the only answer — then of course you can't dump on Bloomberg without dumping on Sanders, too. Regardless of the actual facts.

How else do you explain the lede of the Associated Press story by Steve Peoples, Alexandra Jaffe and Michelle L. Price headlined "Debate night brawl: Bloomberg, Sanders attacked by rivals"?

"Take-no-prisoners politics"? Do you have any idea what that means? It sounds a bit like Pete Buttigieg's straw-man version of Sanders. But the authors provided no explanation. They simply tried to equate two things that were completely disproportionate:

Bloomberg, the former New York mayor who was once a Republican, was forced to defend his record and past comments related to race, gender and his personal wealth in an occasionally rocky debate stage debut. Sanders, meanwhile, tried to beat back pointed questions about his embrace of democratic socialism and his health following a heart attack last year.

Former New York mayor Mike Bloomberg suffered a punishing welcome and Sen. Bernie Sanders was bludgeoned with criticism as an animated cast of rival candidates spent Wednesday's presidential debate scrambling to stake their claims against the two rising contenders in the Democratic race.

You'd think from this paragraph that both candidates emerged equally diminished:

Sanders (I-Vt.) was challenged on his electability and questioned on his health, the combativeness of his online supporters and the viability of his policy prescriptions. Bloomberg was hit for his political record, his alleged coarse descriptions of women, his extraordinary wealth and his contention that he is best positioned to defeat President Trump.

The banner headline in the New York Times was singularly vapid: "Democrats Hurl Stinging Attacks Across the Stage." The updated headline online was much more appropriate, relative to the actual debate: "Warren Leads an Onslaught of Attacks, Zeroing In on Bloomberg." But the story itself, by Alexander Burns and Jonathan Martin, reflected the first one:

The Democratic presidential candidates turned on one another in scorching and personal terms in a debate on Wednesday night, with two of the leading candidates, Senator Bernie Sanders and Michael R. Bloomberg, forced onto the defensive repeatedly throughout the evening.

Bloomberg on the defensive? The Times had plenty of examples to back that up:

In his first appearance in a presidential debate, Mr. Bloomberg, the former mayor of New York City, struggled from the start to address his past support for stop-and-frisk policing and the allegations he has faced over the years of crude and disrespectful behavior toward women. Time and again, Mr. Bloomberg had obvious difficulty countering criticism that could threaten him in a Democratic Party that counts women and African-Americans among its most important constituencies.

Two candidates who have shied away from direct conflict in past debates, Senator Elizabeth Warren of Massachusetts and former Vice President Joseph R. Biden Jr., mounted something of a tag-team onslaught against Mr. Bloomberg, several times leaving him visibly irked and straining to respond.

As for evidence that Sanders was repeatedly on the defensive "throughout the evening"? Further down in the story, the authors write:

But Mr. Sanders, too, was pressed to address some of the persistent questions about his candidacy, including whether he would release a fuller version of his medical records and why his candidacy appears to inspire uniquely vitriolic behavior by some of his supporters on the internet. Mr. Sanders, Vermont's junior senator, insisted that nearly all of his online fans were good and decent people, but said he would "disown those people" who behave in deplorable ways.

As a journalist devoted to transparency, I think Sanders' refusal to release his full medical records as promised is inexcusable. But the moderators let him wriggle off that one too easily, and I think he came away from the debate mostly unscathed.

Indeed, Burns and Martin, undermining their own lede, eventually admitted as much:

There was little in the debate to suggest that Mr. Sanders, the national front-runner and the favorite to win Nevada's caucuses on Saturday, had been knocked off balance, and the pile-on against Mr. Bloomberg had the potential to work in Mr. Sanders's favor by keeping the focus of hostilities elsewhere.

Over at NPR, Domenico Montanaro's report read like pro-Bloomberg spin. The former mayor "had a spotty debate" but also "had his good moments." Montanaro made lame excuses: "Bloomberg, 78, hasn't debated in 11 years." And he even gave Bloomberg hints for next time:

Bloomberg missed a lot of opportunities to take credit for his personal spending on political issues. A more practiced candidate might have pivoted to talk about the $100 million he spent in 2018 trying to elect women candidates. And he made no mention of the substantial sums he's spent on promoting gun control.

Some got it right

Some of the coverage was spot on.

The lead story in the Los Angeles Times by Evan Halper, Seema Mehta and Arit John minced no words. Here's how it's done:

In the most combative event yet in the 2020 presidential race, Michael R. Bloomberg struggled to defend himself Wednesday night as fellow Democrats baited, belittled and broadsided the billionaire, who made a shaky debut on the debate stage.

Bloomberg entered the debate ascendant in the polls, but he was bloodied by the time he left. He responded to many of the attacks lobbed by fellow Democrats with halting and uncertain answers. At one point, the crowd booed the former three-term mayor of New York City.

Rivals joined together to take aim at Bloomberg's history of championing "stop and frisk" policing tactics that targeted young minority men in New York. They pilloried his media empire's secret settlements with female employees alleging harassment, and the lewd remarks he is accused of making.

They highlighted the former Republican's late-in-life return to their party and his delay in releasing his tax returns for public scrutiny.

Under the headline "Bloomberg comes under scathing attack at first Democratic presidential debate in Nevada," Simon Lewis and Tim Reid wrote for Reuters:

Michael Bloomberg faced a barrage of attacks at his first Democratic presidential debate on Wednesday, as his rivals assailed the free-spending and fast-rising billionaire over his record on race, history of sexist comments and the use of his massive fortune to muscle his way into the contest.

In a rough debate debut that gave voters their first unscripted look at the media mogul and self-funding former New York mayor, Bloomberg seemed uncomfortable and hesitant as he defended his record and argued that he is Democrats' best chance of beating Republican President Donald Trump in November.

And at Politico, Sally Goldenberg and Christopher Cadelago wrote:

He was rusty. He was testy. He was out of touch. And, for a candidate often shielded by the scripted one-liners of killer campaign advisers, he was on his own — unable to hide his peevish demeanor and unable to portray himself, as his campaign has tried to do, as the clear choice to stop Bernie Sanders and beat Donald Trump.

Over at the Washington Post, the best news coverage was relegated to "Morning Mix," the Post's blog for "viral" news. Allyson Chiu wrote (and provided video clips) of Bloomberg being savaged, mostly by Warren.

There's little doubt in my mind that, regardless of the Sanders-and-Bloomberg-were-both-on-the-defensive coverage, the Vegas debate will be long remembered as the night Bloomberg's campaign landed with a splat.

What's unclear to me is how long the Dan Balz view of the Democratic political landscape will last. If Bloomberg's paid media can overwhelm the stench of his first debate outing, maybe it lasts a while. If Bloomberg can't pick himself up off the floor, then "the question is" who will be anointed the new Sanders alternative? And how badly will that skew the coverage?