What Tucker Carlson's defense of Roger Stone tells Trump: Go ahead and cheat in 2020

Pardoning Stone would be sending a signal: Trump will make sure people who cheat on his behalf get away with it 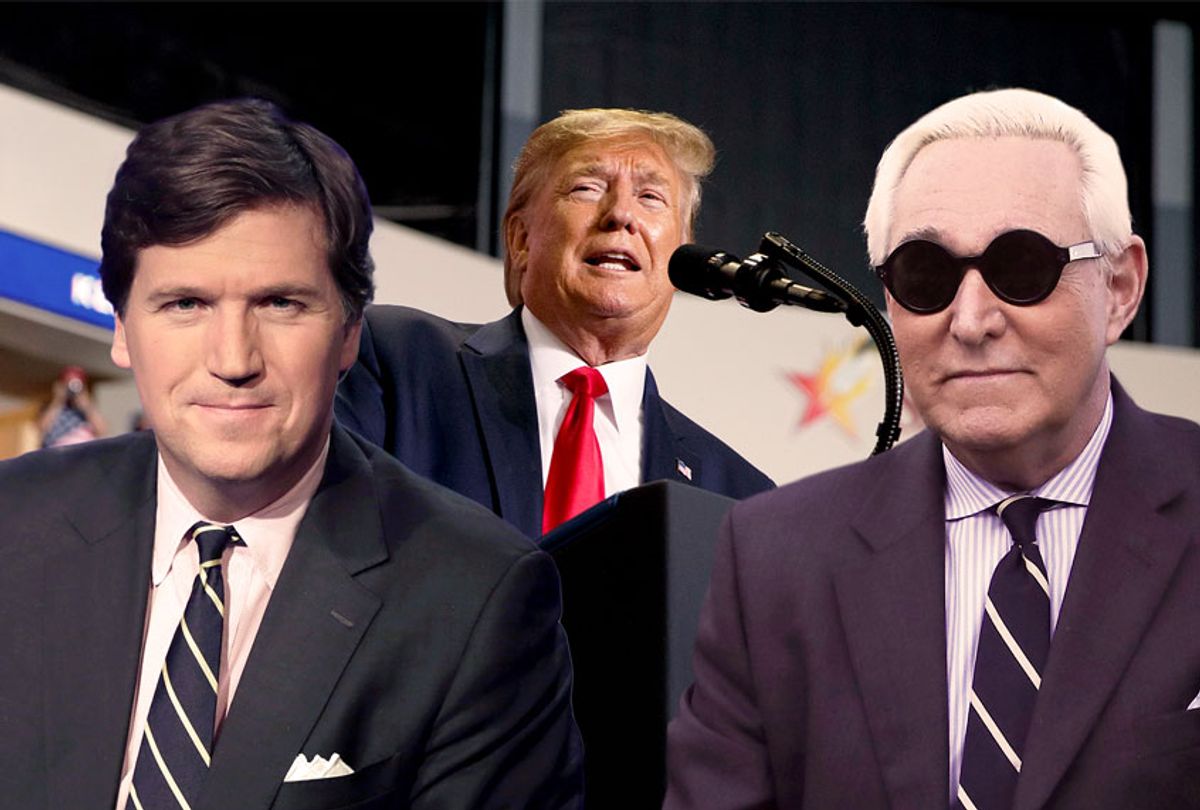 Wednesday night's Democratic primary debate was perhaps the most anticipated of the 2020 election cycle so far, and it did not disappoint, with Sen. Elizabeth Warren of Massachusetts demonstrating her ninja skills at eviscerating arrogant billionaires, in the form of former New York City mayor and attempted nomination-purchaser Mike Bloomberg. It was wholesome fun. It made people feel good. It dominated the cable news cycle and the headlines.

It also gave Fox News TV host Tucker Carlson the cover he needed to encourage Donald Trump to cheat in the 2020 election.

Carlson did this by hosting a segment portraying the federal case against Roger Stone, long time GOP dirty trickster and crime-committing campaign goon for Trump, as a "travesty" that "should never happen to anyone in this country of any political party." He encouraged Trump to pardon Stone, and alluded to other pardons that Trump has handed out — notably, to extremely guilty parties who happen to be overprivileged white men Trump clearly believes should be above the law, as he believes himself to be.

Trump was listening, as he tweeted — and pinned — a video of the Carlson segment. Now that Stone has been sentenced to 40 months in prison, there is a not-small danger that Trump makes good on his threats to pardon his infamous friend.

Carlson's overwrought language might lead one to imagine that Stone is some innocent puppy who is being railroaded for non-crimes by overeager prosecutors — something like what happened to the Central Park Five, who were actually innocent, while Trump himself has continued to defend his demands that they be put to death anyway.

The truth is that Stone is guilty, much like other Trump associates — such as his campaign manager Paul Manafort and his personal lawyer Michael Cohen — who are in prison after their crimes were exposed by special prosecutor Robert Mueller, who looked into how involved Trump was with the Russian conspiracy to interfere in the 2016 election. Stone was convicted of seven counts — five of lying to Congress, one of hiding documents, and one of threatening a witness — all related to his larger scheme of trying to help Trump cheat in the 2016 election.

Unable to deny Stone's guilt, right wing media has instead tried to argue that these are merely "process crimes," as if committing crimes to cover up for other crimes is somehow less of a crime. The claim is that the sentence initially recommended by federal prosecutors — seven to nine years — is outrageous under the circumstances.

But that argument, unsurprisingly, fails to take into consideration what Stone was trying to cover up with those "process crimes": A full-scale effort to undermine free and fair elections by working with a conspiracy to steal from Democratic officials and use the stolen documents to smear Hillary Clinton. As the Mueller investigation found, Stone had been working with Wikileaks, who was publishing stolen documents (provided to Wikileaks founder Julian Assange by Russian intelligence agents), and making himself a go-to between the campaign and the document-stealing conspiracy.

Which is all to say that Stone was involved in a modern-day Watergate — except worse, because unlike the Watergate burglary, Stone's conspiracy involved hostile foreign powers and was actually successful. The "process crimes" are better understood as a cover-up of an effort to help Russia undermine American democracy to install an autocrat like Trump.

But Trump and his attorney general, Bill Barr, appear to believe that undermining democracy in the name of authoritarianism is no crime, and so have been interfering with the Stone sentencing. Trump has been publicly and likely privately pressuring the Justice Department to lay off Stone. Then Barr drove off four federal prosecutors to quit by pressuring them to reduce the recommended sentence for Stone. Then Barr overrode the recommendation.

Trump's open gloating about how he got Barr to stick a thumb in the eye of justice and abandon any pretense of respect for rule of law has been aggravating Barr, who clearly prefers to do evil under the veil of shadows. He's even been pretending he's going to quit if Trump doesn't stop bragging about all the evil fun they have together, a line no one should buy because Barr's life work is creating authoritarian power and he's not going to stop just because the current boss is so crass about it.

Pardoning Stone isn't just about the 2016 election, however. It's about the 2020 election and Trump's not-exactly-subtle plans to cheat in that one, as well. Pardoning Stone is about sending a signal, that Trump fully intends to abuse the power of his office to make sure that people who cheat on his behalf will get away with it. Plus, if Stone is out of prison, he's free to get right back to committing dirty tricks and even crimes to get Trump elected.

After Republicans, barring Sen. Mitt Romney of Utah, decided to acquit him in the impeachment trial and therefore complete the cover-up of Trump's efforts to blackmail Ukrainian leadership into helping him cheat in 2020, Trump has been even more aggressive about asserting his presumed right to abuse the power of his office to win in 2020 by any means necessary. Browbeating DOJ officials about Stone's sentencing and publicly flirting with a pardon is an extension of this. Pardoning Stone would be even worse.

The purpose of all this — especially the slow roll-out of it, where Trump gradually escalates his rhetoric, instead of going straight to the pardon itself — is about normalizing his behavior. Just as a domestic abuser doesn't go straight to punching his wife on their wedding day, but spends weeks and months undermining her self-esteem and working up to violence, Trump is wearing down the public and Democrats in Congress until they lose the ability to fight back.

Tough to say it, but it's working. He's wearing down the will of the resistance. He's getting his own supporters accustomed to the idea that cheating is acceptable — noble even — if it's done to defeat Democrats. And all with the aid of Fox News and pundits like Carlson.