With nothing left to lose, Elizabeth Warren flattens Mike Bloomberg — which probably helps Bernie most of all 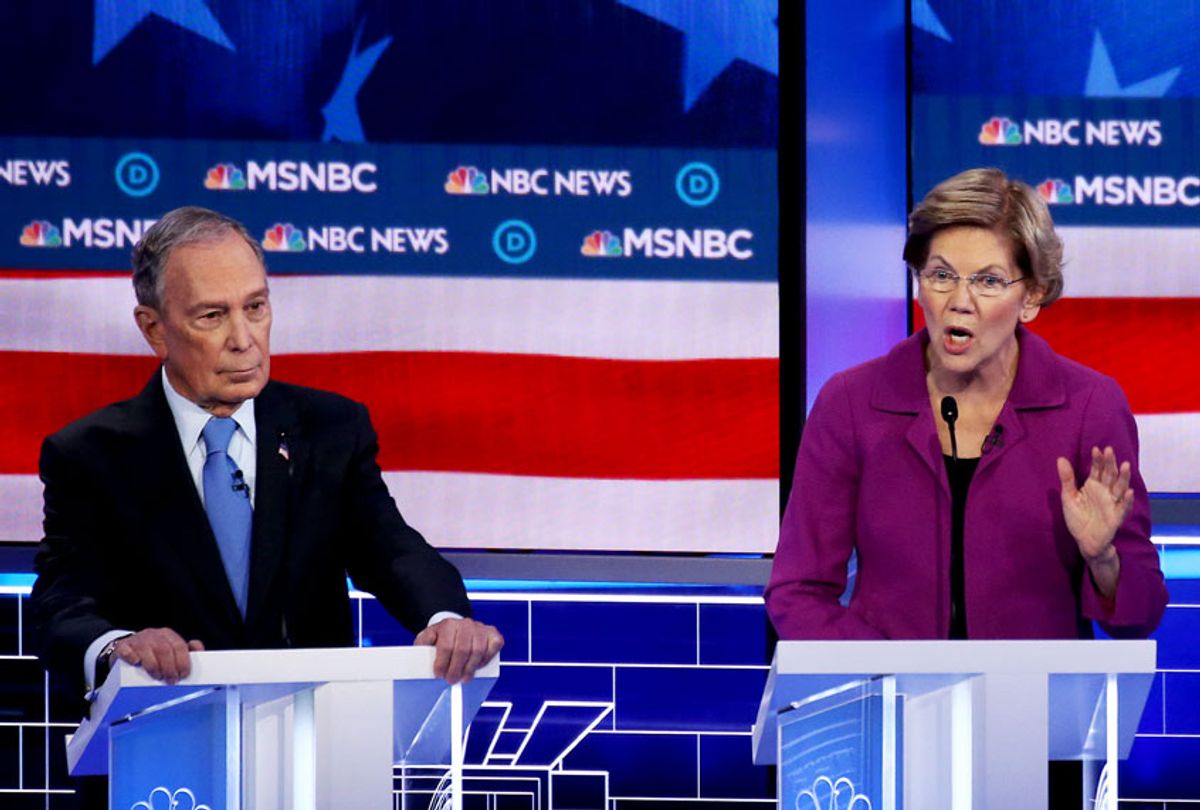 Finally, after months of overstuffed debates with the stage cluttered up with people who never had a chance, we got a Democratic primary debate whittled down to the (relatively) small number of six candidates — all of whom had a good argument to be there. Well, most of them, anyway. The Las Vegas debate stage on Wednesday night was marred by the presence of information billionaire and former New York mayor Mike Bloomberg, who managed to weasel into a group of serious politicians who have gotten actual votes in the primary just by spending an ungodly amount of money on advertising. Here's what Bloomberg has bought for all that money: His name is now the one pollsters hear from people who don't follow politics, when they're asked about who they're thinking of voting for.

Having a bonafide Batman villain on stage did exactly what one might hope, however, by injected some real life into this debate. Right from the top, it was Bloomberg punching time, with Sen. Elizabeth Warren of Massachusetts taking the lead to the extent that it stopped feeling like a debate and more like a interrogation.

For those of us who haven't had a chance to see Harley Quinn kicking dude ass in "Birds of Prey," watching Warren wallop Bloomberg across the stage (metaphorically speaking) was a more than adequate substitute. Truly, it's hard to pick just one moment, so let's revisit some of the best:

When moderators invited Sen. Bernie Sanders of Vermont, the polling leader both in Nevada and nationwide, to insult Bloomberg, he did OK. But then Warren followed up by saying, "I'd like to talk about who we're running against: a billionaire who calls women 'fat broads' and 'horse-faced lesbians,'" which she hastened to assure us was a reference to Bloomberg and not Donald Trump.

She added, "Democrats take a huge risk if we just substitute one arrogant billionaire for another," making the important point that Bloomberg is not electable.

Later, Warren demanded that Bloomberg, who has been sued at least 40 times for sex discrimination and sexual harassment, "release all those women from those nondisclosure agreements so we can hear their side of the story."

Bloomberg lamely responded, "Maybe they didn't like a joke I told," giving Warren a chance to go after him with the tenacity she shows in Senate hearings, accusing him of "muzzling" women and noting that it definitely damages one's "electability" to have so many potential time bombs in your history.

Bloomberg's response was indicative of his weak debate performance all night, in which he singlehandedly destroyed the image of a cool, noble, farsighted manager his expensive campaign team has carefully built up, largely by acting like a brat who forgot what being a real person is like many billions of dollars ago.

In fairness, Bloomberg managed to conceal the explosive temper that many of the women who have sued him have reported in court documents, but still. It was bad. He griped about "communism," in an ill-advised dig at Sanders. He made fun of women who sued him. His two moods were bland and sneering. He lied shamelessly about his views on health care. He proved Warren's point that he's really just another flavor of Trump, but with a less expressive face.

Warren's skillful Bloomberg disembowelment was clearly gratifying for many people other than myself, as evidenced by her campaign's report that this debate provided her single best hour of fundraising. But as exciting as it may be to imagine the entire race being reshuffled because of her debate performance, we've been down this path before. This is how it goes: Warren wins the debate; people love her and say she's their second choice. But stymied by sexist fears instilled by cable news pundits who protest that someone, somewhere, may find a woman unelectable, too many people still hesitate to vote for her.

Instead, this is likely to be one of those cases where a woman does the work and a man reaps the benefits, with the man in this case being Bernie Sanders. He's clearly in the lead after the Iowa and New Hampshire contests, but not by much. There's still a risk that panicky voters decide he is also not electable and go with someone else instead. But thanks in large part to Warren's takedown in Vegas, Bloomberg's ability to muscle in and intimidate voters into thinking he's got the juice has been significantly damaged. Which just helps clear the field even more for Sanders to pull ahead.

Perhaps the more toxic members of Sanders' fanbase, who have been tweeting snake emojis at Warren in recent weeks, should instead feel some gratitude and tweet something more appropriate at her. I recommend the heart-eyes cat emoji.

Not that Sanders was a slouch on Wednesday. He was particularly robust after Bloomberg sneered that the Sanders platform is "communism," which is a flat-out lie. Sanders' agenda resembles the generous social welfare programs of western Europe, and not the widespread nationalization programs of communist countries.

This gave Sanders an opportunity to accuse Bloomberg of a "cheap shot" and to quote Martin Luther King Jr. in observing that America has "socialism for the rich" and "rugged free enterprise for the poor."

Sanders also argued that "we are sick and tired of billionaires like Mr. Bloomberg seeing huge expansions of their wealth while a half a million people sleep out on the street tonight," a comment that benefited from having Bloomberg on standby, ready to give another smug sideways look at the cameras.

As for the rest of the candidates, it's hard to see any of them being able to get a leg up after this debate. Former South Bend, Indiana, mayor Pete Buttigieg and Sen. Amy Klobuchar of Minnesota have done fairly well in Iowa and New Hampshire, but spent the night bitterly arguing with each other in a way that was unpleasant and bound to hurt both of them. Former Vice President Joe Biden showed up with more energy than usual, but seemed angry and shouting all night, and frequently stumbled over his words. He had to prove his campaign wasn't falling apart and he failed to do that.

But mostly, the night was about Warren kneecapping the guy who had bought his way into second place in the polls, which probably did more to remove an obstacle from Bernie Sanders' path than to save her campaign. Mind you, I hope I'm wrong about that: It would be amazing if people stopped being afraid and did the right thing. But this could just as easily hurt her prospects, since our sexist culture tends to punish mouthy broads.

Still, since a Bloomberg nomination would be a disaster for the Democratic Party and the country, we all owe Warren a debt of gratitude for everything she did Wednesday night to prove that his shiny ad campaign is a classic case of lipstick on a pig. If that debate performance isn't enough to overcome Bloomberg's spending, nothing will be. If Warren's all-out worked, we may all be spared from watching Donald Trump flatten Bloomberg in November. Too bad she probably won't get the credit.