"Birds of Prey" is a fantabulous, feminist grenade

Harley Quinn is back to take down the patriarchy, and this revolution brings scrunchies 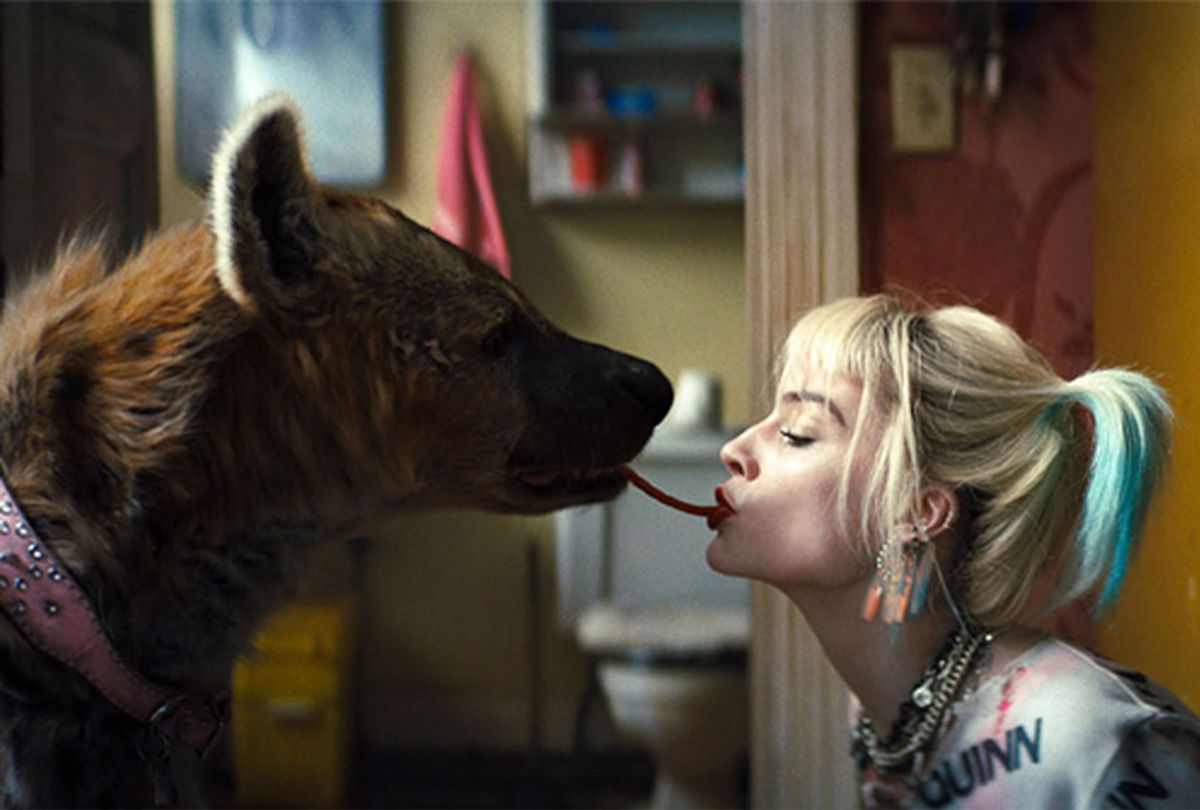 The patriarchy will be dismantled with hand grenades and hair ties. At least, that's the impression I have after watching the campy, ultraviolent, and feminist AF "Birds of Prey (and the Fantabulous Emancipation of One Harley Quinn)." Sounds like a practical plan.

As Harley (Margot  Robbie) explains in the film's opening moments, the volatile former Dr. Harleen Frances Quinzel has recently broken up with her on-again, off-again supervillain boyfriend, Joker. She's currently running through all the stages of relationship grief — crying, cutting her own hair, eating spray cheese, getting a hyena, feeding a pervert to the hyena, blowing up a chemical plant — you know, typical girl stuff. But she soon learns the dangers of no longer having a murdering, manipulative, emotionally abusive man around to protect her, and the power of women collaborating to unleash havoc.

Four years ago, Robbie's gleefully unhinged performance as Harley in "Suicide Squad" made her an immediate fan favorite, even if critics were less charitable about the film itself. Now, Gotham City is still teeming with antiheroes who posses potent combinations of brains, combat skills and total disregard for humanity. But there's nobody else who, like Harley, understands that a foe's list of grievances against them may include "has a vagina." Nor is there another who might let a sadistic goon reach into her pocket . . .  and pull out a tampon. Or one who, in a climactic battle, will hand a fellow combatant a welcome hair thingy to pull back her tresses. You know how Ginger Rogers did everything Fred Astaire did, but backwards and in high heels? In case nobody every told you before, it was actually backwards, in high heels, menstruating, and with sweat-drenched hair flying in her face. And it's pretty great to see that acknowledged, anywhere.

Directed by Cathy Yan ("Dead Pigs") and written by Christina Hodson ("Bumblebee"), "Birds of Prey" is at once a relatively formulaic, poop jokes and car chases-strewn comic book movie and a sophisticated exploration of contemporary feminist issues. Come for the ass kicking, stay for the takedown of rape culture.

The villain this time around is crime lord/rich creep Roman Sionis (Ewan MacGregor, making some unusual accent choices), a sadistic nightclub owner trying to get his hands on a legendary diamond that holds a secret. When nimble young pickpocket Cassandra Cain (Ella Jay Basco) gets it first, Harley's path inevitably crosses with that of the girl, as well as world-weary cop Renee Montoya (Rosie Perez, her dancer's energy still gloriously full throttle), nightclub singer Dinah (Jurnee Smollett-Bell) and a mysterious vigilante known as the crossbow killer (Mary Elizabeth Winstead). Again and again, the message is clear — no dark knight in shining armor or maniac in clown makeup is coming to save any of them. Women, you're on your own. But you're stronger when you work together. And although the ladies are far from natural allies, they must eventually join forces to save their own lives, forming a kind of Gotham City Spice Girls.

It's uncanny how, in many ways, this technicolor popcorn opus traverses so much of the same ground Robbie's recent "Bombshell" does. It also fits neatly into the growing pantheon of other post #MeToo stories, like this month's "The Assistant" and the upcoming "A Promising Young Woman" (the latter of which Robbie is a producer on). It airlifts the audience out of the tired, convenient ideology around what a victim is supposed to look and act like. It demands you understand that a woman can be unsympathetic in many regards and still neither invite nor deserve harassment, abuse, and assault. Harley is at once a vicious, destructive lunatic and a traumatized survivor or a toxic relationship. She does terrible things. She is a violent criminal. She is vulnerable. (She's also a professed Bernie voter, and if Harley Quinn can take time out of her chaotic day to register to vote, you can too.) This is not a story of her redemption, but her liberation.

The film is pointed in its insistence on this point. In a pivotal early scene, Dinah notices a drunk Harley kissing a patron in the club's alleyway and walks away, but when she realizes an incapacitated Harley is being lured into a van, she doubles back to intervene. Because if you can't consent, it's not consent. And in a moment chillingly reminiscent of a similar one in "Bombshell," a powerful man demands a puzzled, then terrified, woman disrobe for him. Stung by a recent setback, Roman spies a club patron simply enjoying a night out and laughing with her friends. Goaded by his chief flunky, he flies into a rage, assuming the woman is laughing at him. As punishment, he makes her stand on a table in view of the whole audience, and orders her male companion take off her dress. It's a shocking — and effective — interpretation of Margaret Atwood's famed quote that men "are afraid women will laugh at them" and women "are afraid of being killed." At the fan screening where I viewed the movie, the audience gasped at the scene, in part, I suspect, because director Yan entirely avoided making it sexual or exploitive. Think of every movie where a woman's clothing has involuntarily come off, and how often it's been played for laughs or thrills or smug comeuppance. (There are lists out there, but I'd rather not.) This is a middle finger to all that.

While "Birds of Prey" doesn't have the consistent whimsy of say, "Deadpool," it is no two-hour downer. (It also doesn't have T.J. Miller, thanks.) Plenty of the film's tone is light, funny, and subtly paradigm-subverting — women complimenting other women for how well they fight in tight pants! Taking a beat to admire how well they kill bad guys! Shine theory, yo! Frankly, after months now of exhausting hot "Joker" takes and white male rage, a little feminine mayhem feels welcome right about now. Go see it and judge for yourself. Bring a friend. And don't forget to pack a few extra hair bands for the revolution.

"Birds of Prey (and the Fantabulous Emancipation of One Harley Quinn)" is in theaters beginning Friday, Feb. 7.