This supposedly hip, anarchic romp becomes a boring mishmash of wasted talent — which will be a huge hit anyway 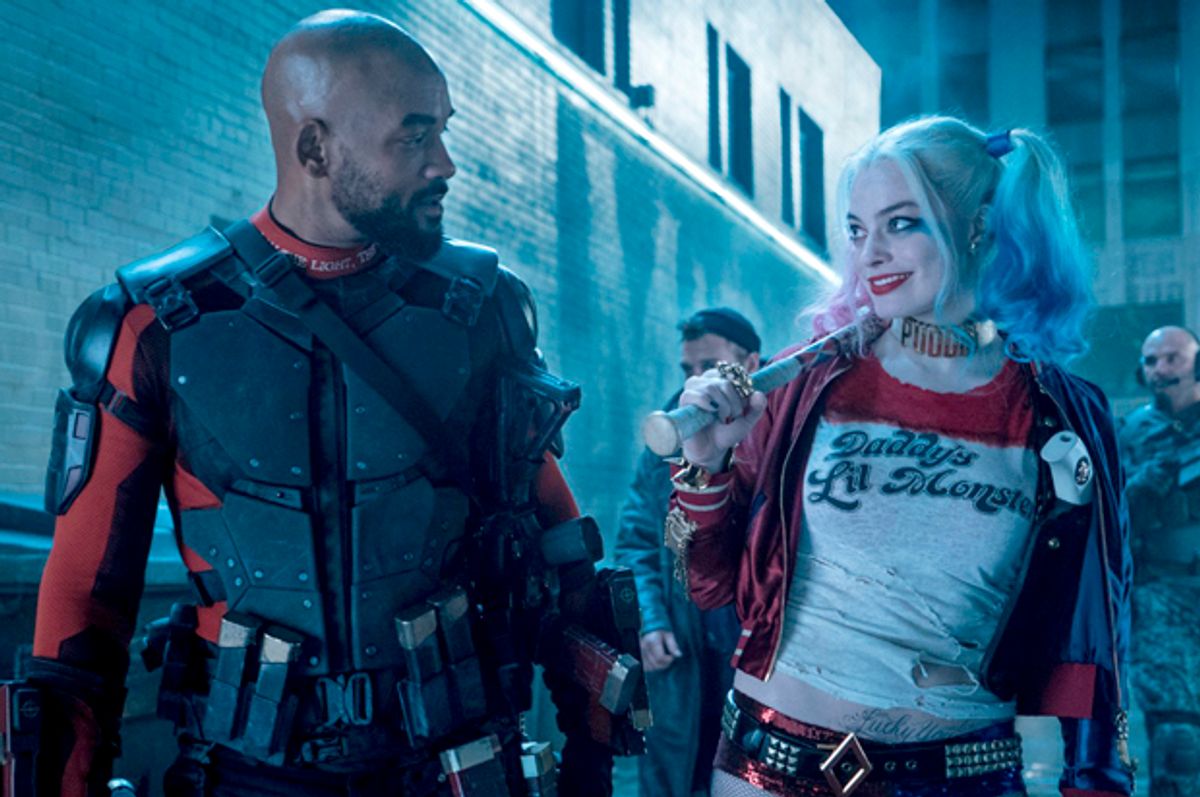 Will Smith and Margot Robbie in "Suicide Squad" (DC Entertainment)
--

We reached the decadent phase of superhero cinema some time ago, somewhere around the X-Men prequels and the second Thor movie and the failed Spider-Man reboot. (As one friend of mine puts it, Andrew Garfield is now the Timothy Dalton of Spider-Men.) But decadence is supposed to be fun, surely, or at least more fun than the desperate, sludgy, frantic mess of “Suicide Squad.” This assemblage of good-bad characters scraped from the bottom of the DC Comics barrel was constructed to fill the late-summer surprise hit niche established a couple of years ago by Marvel’s “Guardians of the Galaxy.”

But that’s not something you can calibrate in advance: “Guardians” actually was a surprise, whereas “Suicide Squad” is mega-budget Hollywood product masquerading as something hip and edgy and anarchic, a crude evasion that partly accounts for the way it’s being savaged by critics. (Sure, it’s terrible. But it’s not even close to the worst movie of the summer or the year.) It has big stars, although their impact is pretty damn small: Will Smith tries to complexify his boring action-movie persona by playing the hit man known as Deadshot, but his entire story arc is about how much he loves his daughter. It has Jared Leto playing the Joker, to which I can only say that I have seen Heath Ledger act this role, sir, and you are no Heath Ledger. It has Viola Davis doing her stern vice-principal act for a big paycheck, and why not? It has Margot Robbie as Harley Quinn, a psychiatrist turned psychotic, slutty cheerleader type, and if critics are falling out of their trees over her I suppose the reasons are obvious.

“Suicide Squad” reportedly had a $175 million budget, and whatever was left over after they paid Will Smith went toward the CGI effects, which rate about a B-plus in expensive crap-movie terms. Somewhere way down the pay scale was imported prestige director David Ayer, who made the World War II film “Fury” with Brad Pitt and the excellent L.A. cop drama “End of Watch.” You can understand, in vague hypothetical terms, why Ayer seemed like a good fit for this project, and you can find a few faint glimmers of his personality herein, as in the character Diablo (Jay Hernandez), a flame-throwing East L.A. gangbanger who yearns to go straight. But if Joss Whedon has concluded that the second “Avengers” film, a massive worldwide hit, was a career misfire, one can only speculate how Ayer will view “Suicide Squad” in a few years (or how he feels about it right now).

At any rate, “Suicide Squad” has been built up all year long as the summer’s hottest, hippest popcorn flick, and the terrible reviews will have little impact on its opening weekend. The only thing remotely surprising about this movie is how profoundly second-rate it turned out to be at every level of conception and execution. I liked this kind of pseudo-dark, pseudo-sexy CGI spectacle better when it was called “Underworld: Evolution” and featured Kate Beckinsale kicking ass in a catsuit.

Maybe the second-rateness is not so surprising either. “Suicide Squad” presents symptoms of two separate but often concurrent Hollywood diseases: Amorphous Antagonist Syndrome and Snakes on a Plane Disorder. As in the deeply forgettable “X-Men: Apocalypse,” which came out earlier this year and already seems never to have existed, the ultimate villain in this movie is some shapeless ancient entity newly released from the tomb, or perhaps from a 2006 PlayStation game. He runs around roaring and shooting tangles of electrical current at Deadshot and Harley and Diablo and Boomerang (Jai Courtney) and Killer Croc (Adewale Akinnuoye-Agbaje) and the other supervillains-turned-heroes in this so-called story, but we never get a good look at him, perhaps because the design team never made any final decision about what he looks like.

This feeling that the purported central conflict and the climactic scenes of conflict are no more than afterthoughts has become so pervasive in comic-book action movies that it must be conscious. Have studio marketing teams determined that viewers only care about the characters and the setup — the world-building, in effect — and not about the plot or its resolution? I mean, it’s not an illogical conclusion: Summer tentpole movies almost always begin well, relatively speaking, with some vestiges of wit and narrative ambition, and end in incomprehensible chaos. Furthermore, any possible big action scene, at this point, can only echo or repeat or parody other action scenes we’ve already seen. As Karl Marx observed, history repeats itself, and if the first version is directed by Christopher Nolan, the copies are by Michael Bay.

Moving from the first above-mentioned disease to the second, “Suicide Squad” presents the tragic and/or pathetic modern spectacle — using “pathos” in its original, Aristotelian sense — of an enormous fan base so hungry that it mistakes the aroma for the meal. “Snakes on a Plane” presented the Ur-example in many ways, because the concept and the title was the all-in-all, and the actual movie was ancillary to the cultural moment. But that was at least an audience-created moment, and to a significant extent fans were in on the joke; many were aware, I suspect, that the movie might not be worth seeing. “Suicide Squad,” on the other hand, has been marketed intensively to the ComicCon audience as something close to a redemptive experience, especially for DC fans who felt — how do we put this? — mixed emotions about “Man of Steel” and “Batman v Superman,” Zack Snyder’s post-Nolan ventures.

As I suggested earlier, critics can get overly invested in these Hollywood spectacles too, and “Suicide Squad” is being punished for assembling so much talent with such lackluster results. I haven’t even mentioned the soldier-plus-witch love story subplot featuring Joel Kinnaman and Cara Delevingne. Because it’s so boring! If there are really fans out there who believe that “Suicide Squad” delivers peak awesomeness, or who need to cling to that dogma with Sharknado-like tenacity, then that’s great. We’re talking about a movie meant largely to entertain young people out with their friends on hot August nights, not Donald Trump. It would be asinine to begrudge other people their enjoyment. It’s not one mediocre anti-superhero movie that bothers me. It’s the immense cultural starvation, and the deep-seated willingness to believe that giant entertainment conglomerates hold the only possible remedy.