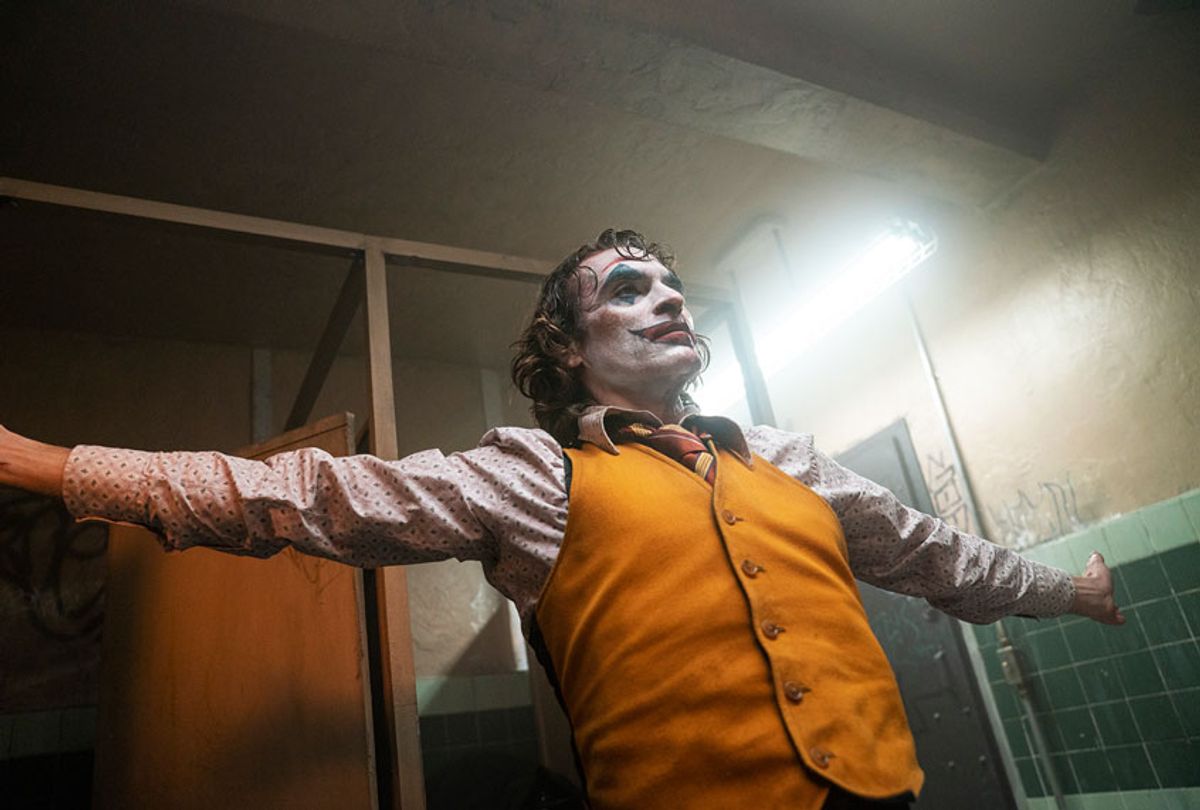 "Joker" is a movie that you ignore at your own peril. Its fans will no doubt complain that this review focuses on politics, but the movie's political implications are so explicit and intentional (despite the main character's last-minute protestations to the contrary) that ignoring them would be the film critic equivalent of dereliction of duty. If you're going to be a "message" picture, then your message defines your artistic merit.

Is it a dangerous manifesto that could inspire incels to commit acts of violence, as some of its critics fear? An edgy character study teeming with social commentary, as director Todd Phillips and co-writer Scott Silver seem to have intended? Is it a dark comic book adventure like "The Dark Knight" or a perverse ode to mentally ill social rejects, like the Martin Scorsese classics "Taxi Driver" and "The King of Comedy" (and "The Dark Knight" as well)?

The answer is yes to all of those questions, but explaining why is not so simple. It's best to start by describing the skin of the film, its meandering plot, before trying to disentangle the messy entrails.

"Joker" is the story of Arthur Fleck (Joaquin Phoenix), a mentally ill and impoverished street clown who has absurdly, cruelly implausible dreams of succeeding as a stand up comedian. The problem is that nothing in his life is particularly funny, an irony that does not escape the future Joker. He suffers from pathological laughter, is socially awkward, depends on numerous psychiatric medications, lives with an abusive and neglectful mother, has no real friends, and is prone to humiliating himself. A series of rejections and setbacks — some economic, some social, some in the form of physical persecution - gradually transform him into a violent criminal. In the process he inspires protests and riots from countless other self-declared "clowns" like himself, with major consequences for both himself and Gotham City.

As a traditional comic book movie — which this does not aspire to be — "Joker" would be a failure. This is, emphatically, not a film for children, and not just because it mostly waits until the end to provide the requisite elaborate action sequences and special effects. "Joker" aims to be Heath Ledger's iconic iteration of that character from "The Dark Knight" by way of Martin Scorsese's gritty narrative style, flaunting its R rating with gruesome gore, an unremittingly bleak tone, vulgar language, and deeply disturbing subject matter.

Yet while it succeeds in aping the superficial aspects of Scorsese's style, "Joker" lacks the intelligence or gravitas of Scorsese's best work. If anything it reminded me of Phillips' first film, "Hated: GG Allin and the Murder Junkies," a documentary about a punk rocker whose shows included nudity, self-harm, violence against audience members, and eating various bodily excrements. Allin infamously befriended serial killer John Wayne Gacy, a fact that Phillips tellingly found to be cool and subversive instead of sinister (he even commissioned Gacy to design the film's poster). What's more, Allin's music was about as good as Fleck's comedy (that is, not very), and as a result, both movies mix their ostensible sympathy for their subjects with a sense of smug superiority. The end result, on both occasions, is simultaneously provocative and shallow.

And yes, there is good reason to worry that this film will appeal to incels. The character of Sophie Dumond (Zazie Beetz) exists for no other purpose than to be a supposed love interest who is stalked, obsessed over, has her apartment broken into, and is eventually reduced to a plot gimmick. She is, in other words, an object in Fleck's world rather than a three-dimensional character, with her main function that of reinforcing Fleck's sense of failure and justify his resentments against the world. This is perhaps an intentional parallel to Cybill Shepherd's Betsy from "Taxi Driver," but we actually saw Robert De Niro's Travis Bickle interact with her in meaningful ways and learned about her as a person. While Sophie isn't vilified, the simplistic and objectifying nature of her story arc is problematic, and meshes uneasily with a movie that is aimed at the violently embittered.

There is a different type of problem in the film's approach to economic issues. Like "The Dark Knight" trilogy, it wants to acknowledge social and political injustices, but lacks the courage to define itself as anything other than generically populist — a creative choice that means it can be easily used for inspiration by both left-wingers and right-wingers. To be sure, Thomas Wayne (Brett Cullen), the father of future Batman Bruce Wayne (Dante Pereira-Olson), has a clearly defined ideology: He is a loathsome oligarch who fancies himself the hero of an Ayn Rand fable. At no point does he question that his wealth and business success reflect on his worth as a human being rather than unearned privileges. He openly derides those who struggle in life as "clowns" who should simply accept their inferiority to him and be grateful that he wants to be their mayor (almost certainly as a Republican). When the Joker murders three of Wayne's obnoxious yuppie employees, the billionaire never questions that they are innocent victims of a jealous loser.

Yet those who oppose this unjust establishment aren't given a specific ideology, just explosively violent rage. It offers no solutions beyond "burn it all down," with the Joker openly (and somewhat disingenuously) disavowing any interest in politics during a climactic monologue. The desire to kill elites is instead driven by primal vengeance, not a desire for a new world order like the anarchism preached by Ledger's Joker and Tom Hardy's Bane in "The Dark Knight Rises." Given the movie's ultra-violent conclusion, the malleability of this aspect of its identity is also potentially dangerous.

Finally there is its handling of mental illness. When I first saw trailers for the movie I was concerned that it would stigmatize people in this community, of which I am a member. My fears weren't entirely founded - Fleck is a sympathetic character and the movie is surprisingly realistic in depicting some aspects of how society mistreats the mentally ill — but it still characterizes Fleck as prone to violence and crime. His unemployability is partially blamed on social cruelty, but there is still the sense that he is incompetent and undeserving of the success he seeks. Phillips doesn't explore Fleck's soul so much as present him as a spectacle, an act that objectifies mental illness as much as using it to make a character into a MacGuffin (which happened in 2018's "The Predator") or a monster (such as in 2017's "Split"). This cinematic trend of objectifying mentally ill characters for plot convenience has become so ubiquitous that it warrants a term.

Would I recommend the movie? If you want to see a memorably idiosyncratic Phoenix performance or are tickled by the idea of Robert De Niro in the Jerry Lewis character from "The King of Comedy," sure. If you enjoy Scorsese's style of filmmaking, yes — as long as you are willing to accept a lesser-grade substitute. If you want to see a fun comic book movie, absolutely not.

Yet that isn't the big thing that matters here. The more important point is that, because "Joker" wants to be a deep movie and is almost certainly going to be a huge success due to the ongoing popularity of the Batman franchise, it is likely that many people will identify with Fleck and consider the movie to be thought-provoking. As a result, the ideas in "Joker" will have consequences. How we proceed with our conversation about them will help determine whether they are for good or ill..