"The Predator": Just above mediocre, with some weird and disappointing choices

This sci-fi action reboot has good performances and effects, but a weak script and a strange depiction of autism 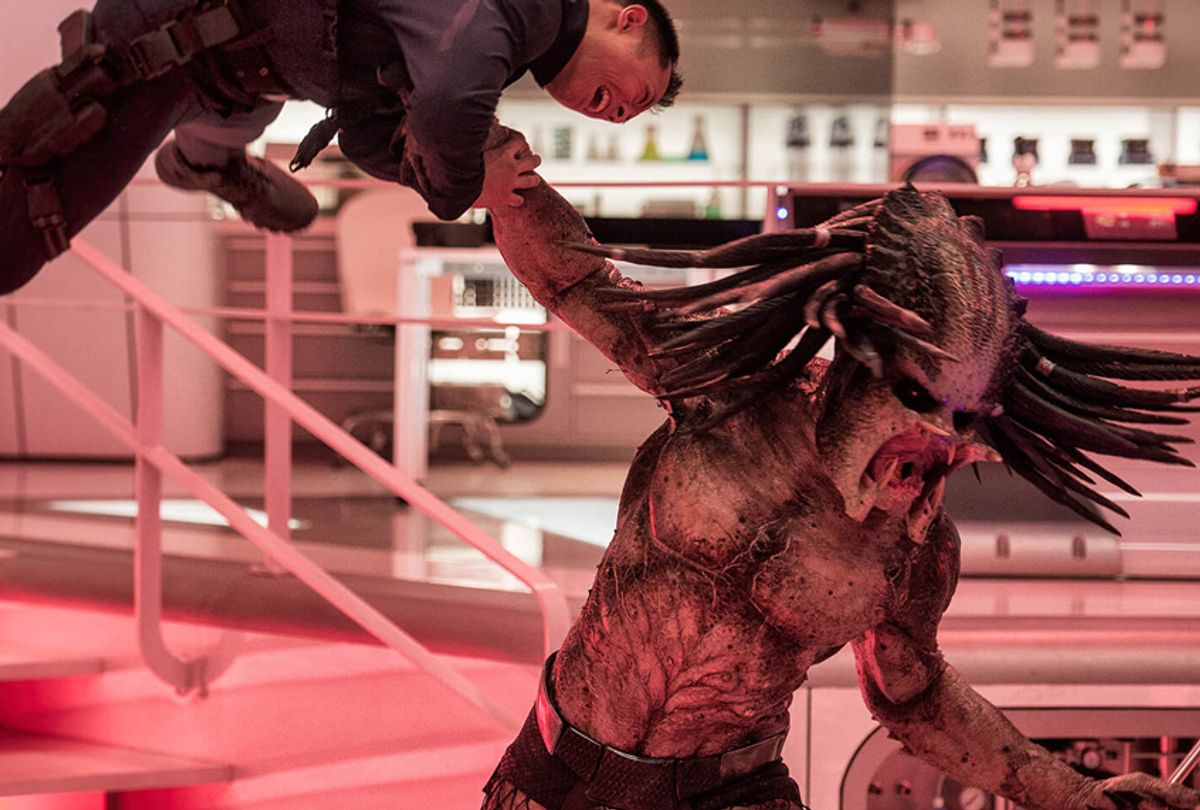 If nothing else, "The Predator" is an easy movie to rate. Using the system employed by the late, great Roger Ebert — zero to four stars, with four meaning a classic film and zero among the worst imaginable — this rebooted science-fiction action flick from director and co-writer Shane Black clocks in at a solid 2.5 stars. This was not only my view, but that of Kyelle, the employee at the Movie Tavern in Allentown, Pennsylvania, whom I talked to about the movie after watching it. So there you go.

Since "The Predator" is only above average, the one feature that really stood out to me was its depiction of various forms of atypical neurological conditions, particularly autism. But before we get to that, a few words about the actual movie.

The plot is pretty straightforward and, to quote the Talking Heads, same as it ever was: There is an extraterrestrial species colloquially known as Predators who hunt human beings and other intelligent life forms for sport. Each installment in the series tries to find a new spin on this premise: This time the main twist is that Predators have developed the ability to biologically integrate the physical and intellectual traits of the species that they hunt.

So our main characters — including former Army Ranger Quinn McKenna (Boyd Holbrook), his autistic son Rory (Jacob Tremblay), scientist Casey Bracket (Olivia Munn), federal agent Will Traeger (Sterling K. Brown), and a motley crew of quirky veterans, including standouts Coyle (Keegan Michael-Key) and Baxley (Thomas Jane) — wind up having to fight giant Predators and dog Predators as well as the standard Predator model usually associated with the franchise. The characters have various mission objectives — rescuing a child, keeping one Predator from leaving the planet so it won't destroy the Earth, trying to hold onto their technology so we can learn from it -- all of which are standard within the sci-fi/action genre. But of course their main priority is just staying alive. As in all previous "Predator" movies, the characters don't so much as grow as do their damnedest to survive until the end credits.

The end result is a reasonably entertaining flick if you don't think too hard about it. The plot leaks like a sieve, which is a tad surprising given that Black -- who made his reputation on the "Lethal Weapon" series, and also wrote and directed the massive Marvel hit "Iron Man 3" -- is a highly regarded screenwriter. Characters deduce important pieces of back story in ways that make no sense, except because the plot requires them to have this highly specific information at that particular point; coincidences provide them with the exact vehicles or implements they need at the precise moments they are required; individuals react to gruesome and unexpected deaths with a nonchalance that seems jarring rather than cheeky; and so on.

On the other hand, the action sequences are engaging, the characters are likable (due more to the quality of the cast than of the writing) and the special effects and creature designs are convincing and interesting. Even better, "The Predator" moves along at a swift pace, and that is not a backhanded compliment: Blockbusters with grand rebooting ambitions for a franchise frequently develop bloated running times as their directors attempt to infuse an "epic" feel into them, and this movie is mercifully short on that kind of pomposity.

Anyone who is a fan of the "Predator" franchise is unlikely to be outraged, although it's also doubtful any of them will choose this one as their favorite entry. This is the epitome of an OK-but-not-great popcorn flick, the kind of thing that's easier to recommend for a Netflix viewing than the price of a theater ticket.

Yet amid this cavalcade of slightly-above-mediocrity, there is the issue I mentioned earlier: The film's, um, interesting ideas about autism (Full disclosure: I am autistic myself and have discussed this on a number of occasions.)

I guess this qualifies as a spoiler alert: Rory McKenna, the kid played by 11-year-old actor Jacob Tremblay, has autism and this becomes a major plot point. Black and co-writer Fred Dekker clearly mean to sympathize with individuals who have Asperger's syndrome, and the film has only contempt for the children who bully the hapless Rory early in the story. Yet when Olivia Munn's scientist character made a casual comment about how some scientists believe autistic individuals represent the next stage in human evolution, my heart jumped into my throat. It has already been established at that point that the Predators are adapting to resemble so the most advanced versions of their species, so I thought to myself, "No way. They wouldn't do that."

But they do. As the main evil Predator tries to make his escape from Earth, he captures Rory McKenna to take with him as a trophy, because his neurological condition makes him an inestimable prize.

It's hard to say how I feel about that. Sure, the little kid in me probably would have thought it was cool that Predators would have allowed me to live and thought I was special, and I suppose it's nice if autistic kids (or adults) who see this movie walk away with a similar glow. Then again, does it really help members of the autistic community to be reduced to a broad stereotype — even a positive one — instead of depicted as individuals with their own unique quirks and foibles? If a movie perpetuates a stereotype with the best intentions, does that make it any less problematic?

And if an autistic person is viewed as a prize to be won because of his or her autism, is that not still a form of objectification?

This is not the only troubling depiction of mental difference in the movie: There is also a character with Tourette's syndrome who behaves like a flesh-and-blood "South Park" joke, with his condition used for predictable situations where he makes vulgar comments in an inappropriate context. As with the autistic character, the screenwriters clearly sympathize with him and want the audience to root for him, but that doesn't change the fact that his entire personality is reduced to his psychological condition — and that, on both occasions, the screenwriters seemed to learn about the condition from other screenplays rather than reliable clinical sources.

In the grand scheme of things, this is not the worst thing about "The Predator," and it certainly doesn't make this a hateful or malicious movie. It just stands out like a sore thumb, and I suspect that isn't just because I am personally more attuned to these details. If "The Predator" had been a transcendent cinematic experience, this would have been nothing more than a footnote. But when the supposed spectacle on the screen is so blazingly average, the little problematic details stand out that much more.

It may not be worthwhile getting angry over these peculiar choices, but they're disappointing. In fact, that word pretty much captures this movie in a nutshell.

Growing up with autism