"Sesame Street," Julia and me: How a Muppet with autism helps heal childhood wounds 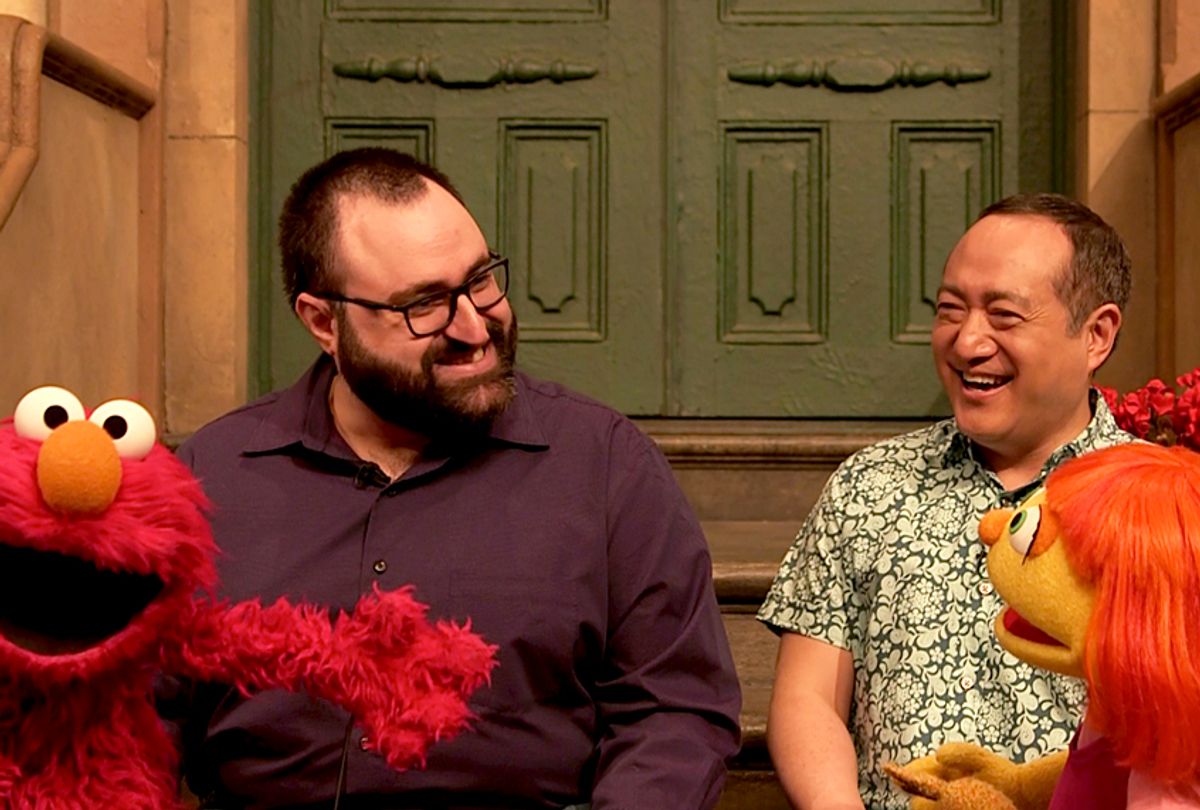 There is something magical about the "Sesame Street" studio.

You open the door and immediately see sites that feel at once nostalgic and familiar — the steps outside the brownstone, Hooper's Store, Big Bird's nest. There aren't many people in these parts who haven't seen "Sesame Street," and it's a testament to the program's warm ethos that even after not watching a single episode for years, the sets still radiate a welcoming aura, a sense of joy that one usually associates with returning to a home you haven't visited in years but feel like you never really left.

Every child deserves to feel like a resident of "Sesame Street" — hell, every adult too — perhaps none more so than those who might be described as the Lonely Ones. You know the Lonely Ones, may even be among them now: A person of any age who feels disconnected from the world by an other-ness, an ineffable inability to fit in. They can be isolated by persecution for their racial background or religion or gender identity, be grappling with abuse or poverty or other traumatic experiences, or simply be inexplicably "different" in who they are and how they look at the world. There are a lot of adult Lonely Ones who started out as child Lonely Ones . . . and many of those fall somewhere on the autism spectrum (1 in 68 children, 50,000 of whom become adults each year).

This is where "Sesame Street" stepped in with the creation of Julia, an autistic character who, thankfully, is not meant to represent the entire autistic community. I say thankfully because of the cliché (which happens to be true) about how if you know one person with autism, you still only know one person with autism. As Sherrie Westin, the executive vice president of global impact and philanthropy for "Sesame Street" — and the force behind Julia — explained to me, Julia is an important autistic character in part because she isn't presumed to have all of the traits that every autistic child possesses. Other children can relate to her precisely because she is a distinct individual whose autism spectrum disorder means that she happens to "do things a little differently," as the characters on the show often puts it.

"Just knowing the sheer number of children diagnosed with autism — I believe today it's 1 in 68 children — we knew we could make a difference, and that's what led to the creation of our whole autism initiative, called 'See Amazing in All Children,' and that led to the creation of Julia," Westin told Salon. "And that was one of the key hopes, that children who were on the spectrum would feel less alone by seeing a character they could identify with, but most important is also to show other children what makes Julia special, not just to focus on her differences."

She added, "So the opportunity for us to raise awareness around autism, to destigmatize if you will, and to increase empathy and understanding, is something we believe Julia and 'Sesame Street' have a unique opportunity to do."

It's a matter-of-fact approach that I suspect serves autistic children well. Certainly, it's one that I would have appreciated when I was younger. I grew up in an era when "autism" was associated with Dustin Hoffman's titular character in "Rain Man," and a child who was non-verbal or talked too much (I went through phases of doing both), or who ran from loud noises and needed rituals in order to remain functional on a day-to-day basis (I used to do the former and still do the latter), was simply being "weird."

That is, assuming you were even given the correct diagnosis. My parents recall being told that I was "mentally retarded" — a term that has been replaced by "mentally disabled" or "developmentally disabled" today, although it was commonplace in the late 1980s and early 1990s — and were urged to put me in a facility because I would never function in society. I was fortunate that they sought a second opinion, but I often wonder how my life would have been different if they had not.

And I'm terrified to think of the other children, whose parents may not have sought a second opinion, and whose lives were ruined because of a misdiagnosis.

In my childhood, sympathy for the neurologically atypical wasn't non-existent, but it hardly took the form of acceptance. If you were abnormal, well, the mindset of educators and other adults was to try to steer your toward normalization as much as possible. Tell the kid to talk less and pay more attention — these mistakes are always the result of willful bad behavior, stop with that mollycoddling nonsense which says otherwise — and explain, in a sweet tone, how if they want to be happy when they grow up, they'll need to start trying to act like the other kids. And if that doesn't work, maybe spending a few years without any friends and getting knocked around by bullies will give them the good sense they need to straighten up and fly right.

This is where pop culture representations like Julia would have been a godsend in my '90s childhood. For other children, the message that it's OK to do things a little differently could have made the difference between getting bullied and having friends. For other adults, knowing that acceptance rather than mere tolerance was in the zeitgeist would have made it more difficult for the so-called "old fashioned" way of handling an unusual kid — "old fashioned," I find, is a term that cruel people can use to give their attitude a veneer of respectability — to get away with their behavior.

For me — again, assuming I had been diagnosed at that age (autism diagnoses were more sparse in that era, so I didn't know I was on the spectrum until my pre-teen years) — it would have let me know that I also could be on the spectrum and still receive love, because distinct individuals like Julia were also on the autism spectrum and were loved all the same.

And boy, Julia is loved on "Sesame Street." When I spoke with Julia and Elmo and Alan, there were no attempts to patronize Julia or speak to her in a condescending fashion. Those efforts may have been well-intentioned if they had happened, but they also would have sent children the message that the fact that autistic children do things "a little differently" means that they shouldn't be treated with as much kindness and nurturing support as their peers. Instead, Elmo treated Julia like any other child — meaning that, in characteristic Elmo fashion, he would periodically interrupt her, break into dances and act like a hyperactive tyke — which sends a message far more eloquent than if Julia had been met with long-winded lectures or pats on the head.

The concept of diverse representation, though bemoaned by conservatives as a burden imposed by the tenets of political correctness, is so crucially important. At its best, encouraging diversity and representation isn't about bean counting, and it should rarely be about policing language or shaming perceived transgressors. It is instead about making sure the people who get left out of our popular culture finally feel like their stories are being told. After all, the movies and television shows and books and music that we consume are more than entertainment. Through the stories woven by these various texts, we as a society develop a better understanding of who we are, what we dream and how we perceive the larger world around us. Consequently, when a group of people are either misrepresented or underrepresented (or both), they can wind up feeling caricatured, ostracized or invisible.

It hasn't been easy for autistic individuals to receive the representation they deserve. One great step forward came when the terrific actor Mickey Rowe, who is himself autistic, was cast to play an autistic character in an off-Broadway production of "Curious Incident of the Dog in the Night-Time." Of course, for every moment like the casting of Rowe, there are also TV shows that feel like they're simply trafficking in stereotypes (whether through prejudice or simply bad writing), like "Atypical."

My hope is that the neurotypical members of the generation that grows up watching Julia on "Sesame Street" will, as a result of that early exposure, stop viewing autistic people as "others" and instead embrace their stories as part of the beautiful tapestry of human experience. For autistic people, I hope that they will likewise feel as if their stories matter and that their differences aren't something which should make them feel shame or regret, but rather be acknowledged in a direct and neutral way as part of who they are.

Perhaps the most difficult part for me when I interviewed Julia was remembering that I would be talking to a child. It wasn't until I was told that I had to adjust my questions for that age range that it struck me just how difficult it really is for me to "interview" a character who needed to be treated like she was four years old. I realized at some point I would have to get in touch with my own inner child.

That, in turn, made me realize just how much that inner child had been buried under the layers of detachment and cynicism I had built up over the years.

While not all of that was due to being autistic, quite a bit of it was. The thing about autistic children is that, when they don't have happy childhoods, they grow into autistic adults who lose touch with that earlier, innocent part of themselves. My fiancée and friends have long joked about how I react to childlike things with snide dismissiveness, or how I'll talk to kids in language that goes way over their heads and seem uninterested in their activities and pursuits. Until I visited the "Sesame Street" set, I assumed this was just me being an "adult," but I now wonder how much of this is because the part of me who would have embraced those things was tainted by my memories of loneliness and rejection during that period of my life.

I may not be as lonely a Lonely One today as I was during my childhood, but I don't think any person who has been a Lonely One ever fully recovers from that condition. And just to be clear, I wasn't a Lonely One because I was autistic: I was a Lonely One because I was raised in a society which is intolerant of people who are different, which in my case happened to be as a result of autism. If we're going to reduce the number of Lonely Ones out there, we need to start by making it clear that everyone deserves to be loved no matter how far they deviate from the norm. A spectrum of personalities, like a spectrum of colors, is a beautiful thing — and it is wonderful that "Sesame Street" is sharing that truth with a whole new generation.