The cathartic laughs of "Bombshell": Why dark comedy speaks to us in the #MeToo era 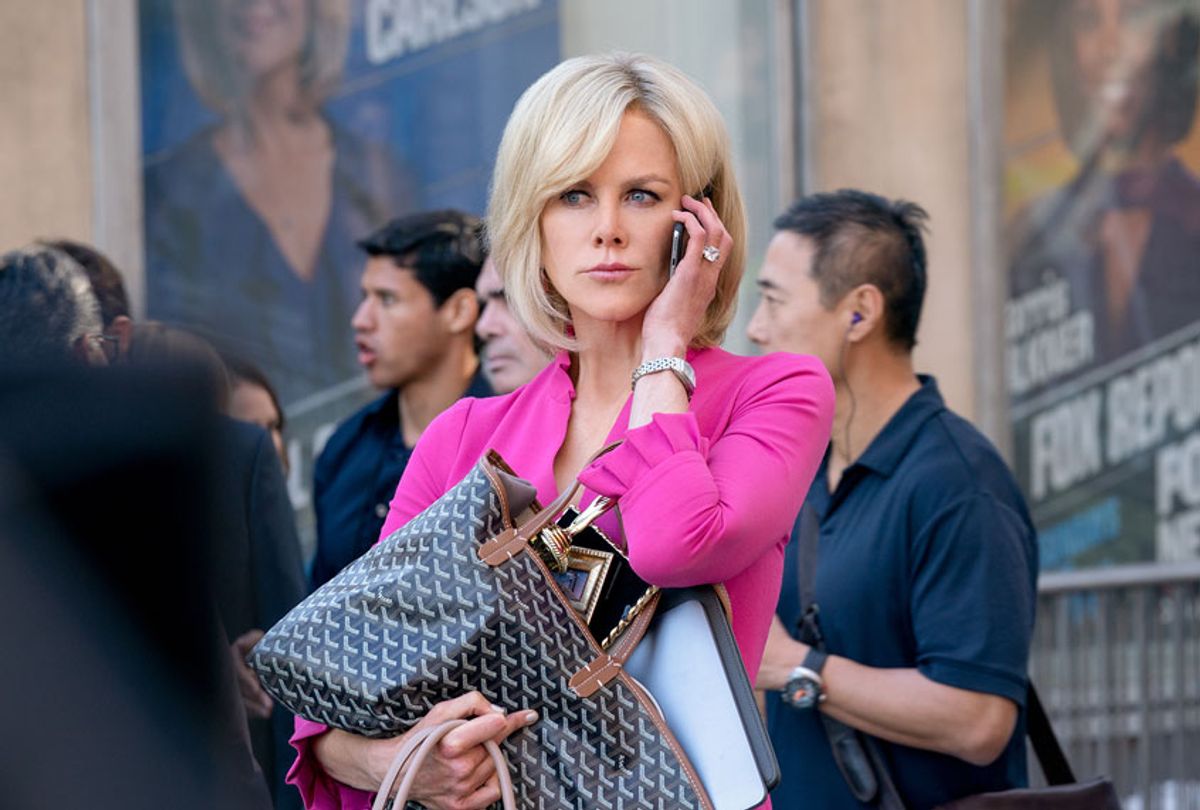 First came #MeToo. Then came the #MeToo backlash. Now, director Jay Roach’s “Bombshell,” a fictionalized version of the sexual harassment scandal that unfolded at Fox News three years ago, officially ushers us into the #MeToo cinematic universe. It’s a tale tailor-made for the already emerging body of work on the subject — one that relies on the darkest of comedy.

The film weaves the high profile sagas of powerful Fox personalities Gretchen Carlson (Nicole Kidman) and Megyn Kelly (an unrecognizable Charlize Theron) with one of a fictionalized new blonde, Kayla (Margot Robbie), an ambitious good girl snared in Roger Ailes’ repulsive web. But while its sympathies are clearly with the women — sneered at by a presidential candidate named Donald Trump, patronized by the d-bag sandwich of  “Fox & Friends” cohosts Steve Doocy and Brian Kilmeade — it wrestles with the reality that these women have also been part of a very powerful and very damaging organization, peddling stories designed to “scare my grandmother or piss off my grandfather.”  That contradiction is a vitally important part of the narrative that deserves more focus than the film gives it — that people we may vehemently disagree with and even dislike deserve as much dignity and protection as our staunchest allies. That there is no such thing as a perfect victim.

But what “Bombshell” achieves magnificently is that it reveals that someone can be a master predator and a totally incompetent idiot at the same time. There is no more satisfying, telling scene in the film than the one of Kayla and her colleague Jess (Kate McKinnon) hooting in astonishment over Bill O’Reilly’s notorious 2004 sexual harassment lawsuit, which detailed his deeply misguided sexual braggadocio. In the suit, Fox producer Andrea Mackris claimed O’Reilly had tried to engage her in phone sex by claiming he was “using a vibrator on himself” and describing a shower fantasy involving “that falafel thing.” (O’Reilly later settled for an undisclosed amount.) These are real things that Bill O’Reilly — who was in his mid-50s at the time —allegedly said, making the famed “bags of sand” scene in “The 40-Year-Old Virgin” sound like erotica in comparison.

"Bombshell" likewise doesn’t shy away from the cringeworthy neediness of Roger Ailes, played as just shy of a storybook ogre by John Lithgow. Ailes is a man with all the power of a media mogul and all the sweaty desperation of an outcast middle schooler who wants to watch a beautiful woman twirl for him. In the film, Ailes is pathetic, yearning — and, we learn, flaccid. And yet, just as the women in these men's orbits jokingly shudder and shrug behind their backs, they hold themselves in check, knowing their careers depend on the approval of these reptiles. In the wake of Gretchen Carlson’s 2016 lawsuit against the network, multiple other women came forward with stories of harassment, stories of Ailes exposing himself and demanding they indeed twirl for him. And as the grim postscript before the end credits of "Bombshell" makes clear, the punchline in all of this is still the illusion of justice.

A scant two years after the Harvey Weinstein story blasted wide a door that had been slowly cracking open for years, it’s already clear that the emergent body of #MeToo themed entertainment feels right at home within the realm of satire. There’s already been a deluge of new storylines on a variety of television shows — some undoubtedly carrying a whiff of “very special episode” self-satisfied gravity. But the best have used their comedic strengths to explore a subject that often feels so painful and persistent in real life, it’s hard to summon the strength to face again in one’s designated recreational hours.

“Succession” kept the thread of concealed abuse as a running cliffhanger and grim farce for two full seasons, leveraging it for everything from a joke about the origins of Uncle Mo’s nickname — his real name was Lester; add it up — to Shiv’s chilling manipulation of a survivor. “Jane the Virgin” revisited an early storyline about the heroine’s relationship with her graduate school creative writing teacher, exploring it anew through the lens of power dynamics and consent. “Brooklyn Nine-Nine” offered a story that feels especially relevant right now, in which a woman who’s been assaulted faces the option of a generous payout and moving on in her career, or everything crappy that comes with pursuing a case — including unemployment. Directed by the show’s costar Stephanie Beatriz, it’s a lot funnier than it sounds, and isn’t afraid to have a B plot about an elderly “disco strangler.”

Perhaps inevitably, “It’s Always Sunny In Philadelphia,” a show that single handedly redefined that word “implication,” had one of its best episodes last season by having the gang confront — and completely not understand — the gravity of sexual harassment. Other series, from “BoJack Horseman” to “You’re the Worst” and beyond, have likewise mined the thorny topics of sexual harassment and ingeniously found the absurdity within.

It’s not just that the hardest subjects lend themselves so well to the cathartic power of comedy. It’s also that guys like Bill O’Reilly are so very far from the smooth seducers they imagine themselves to be, it’s almost a joke. That Matt Lauer's alleged "Bond villain" secret door locking button is simultaneously horrifying and insane. That Kevin Spacey's "Let Me Be Frank" video response to accusations of sexual misconduct was rightly and roundly mocked. There is a kind of vindicating power in that, a reclamation of the narrative.

Margaret Atwood famously once observed that a male friend told her that men “are afraid women will laugh at them,” and her retort was that “We’re afraid of being killed.” It takes comedy — unsettling, bleak, never neatly-resolved comedy — to begin the work of flipping that script. Watching a movie like “Bombshell” or hunkering down with one’s Hulu favorites, one sees another possible outcome. Yes, we're afraid of these guys. But now, we're laughing at them too.