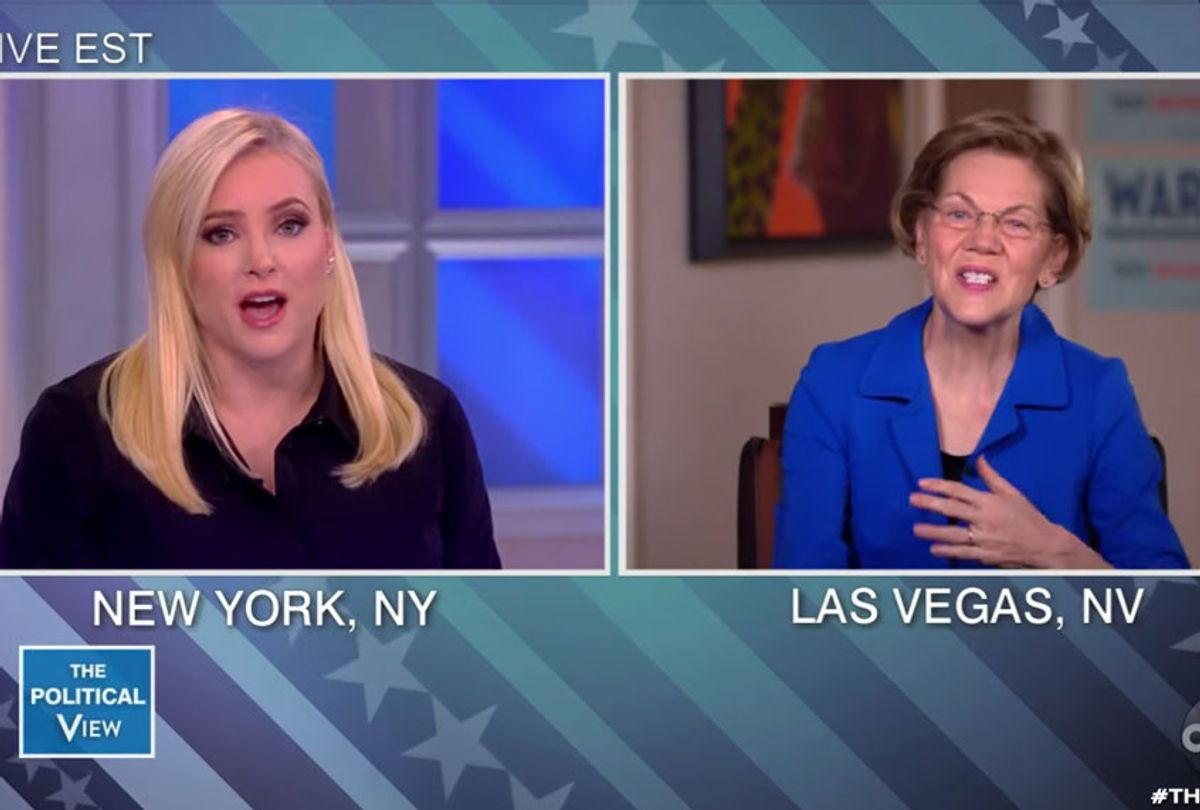 Meghan McCain speaks with Elizabeth Warren on "The View" (ABC)
--

McCain's comment appeared to refer to a "state of the race" memo released by Bloomberg's campaign on Monday. It argued that "if [former Vice President Joe] Biden, [former South Bend Mayor] Buttigieg, and [Minnesota Sen. Amy] Klobuchar remain in the race despite having no path to appreciably collecting delegates on Super Tuesday (and beyond), they will propel Sanders to a seemingly insurmountable delegate lead by siphoning votes away from [Bloomberg]."

McCain went on to argue that Warren made "an incredibly strong point" by pointing out that "Democrats aren't going to win the nomination if they have a history of harassing women." She added that Bloomberg "has a history of both misogynistic and racially-charged comments over a long period of time, and I believe the media has given him a huge pass on this."

Warren agreed with McCain's criticism, speculating that "I'll bet he's reaching in his pocket and spending $100 million more on advertising to try to erase everyone's memory of what happened last night."

In a heated exchange during Wednesday night's debate, Warren confronted Bloomberg about the multiple nondisclosure agreements that his former female employees signed after allegedly accusing him of sexual harassment. Bloomberg told Warren that "none of them accuse me of doing anything, other than maybe they didn't like a joke I told" but refused to release the women from the agreements.

"They signed those agreements," he said, "and we'll live with it."

Warren replied by asking Bloomberg how many agreements had been signed, and when he refused to answer her question, she accused him of muzzling the women in question.

"Understand, this is not just a question of the mayor's character. This is also a question about electability," Warren said. "We are not going to beat Donald Trump with a man who has who knows how many nondisclosure agreements and the drip, drip, drip of stories of women saying they have been harassed and discriminated against."

This is not the first time that McCain has called out Bloomberg over past offensive comments. While arguing about the merits of his candidacy with co-host Joy Behar on Tuesday, McCain cited a lawsuit alleging that Bloomberg told a female employee looking for a nanny that all "you need is some black who doesn't even have to speak English to rescue it from a burning building." McCain observed that if "you want to go up against Trump and you want to take the moral high ground Democrats, I don't know if this is going to be the guy."

You can watch the full video below via YouTube: