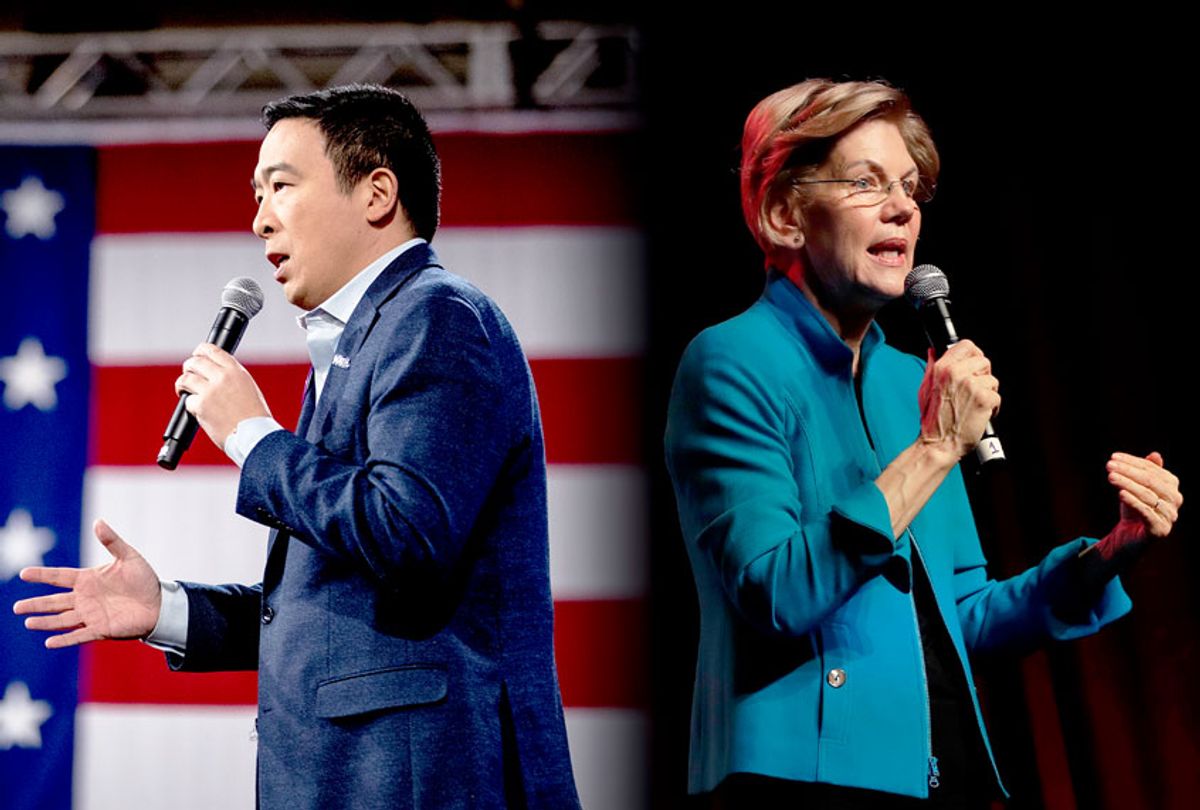 Massachusetts Sen. Elizabeth Warren could not have known that nearly 20 million viewers would tune in to Wednesday's debate in Las Vegas, making it the most-watched Democratic primary debate of all time. Her team might have had an inkling, given the millions upon millions that billionaire Michael Bloomberg poured into advertising in markets around the country.

Like the wealthy and morally bankrupt performer in the Oval Office, Bloomberg is a man who understands the importance of capturing audience share. Thus the common understanding was that this was supposed to be "The Mike Bloomberg Show."

Using the bright lights of Vegas to double for his coming-out party on NBC and MSNBC must have made Bloomberg feel secure in his chances of looking like a sure thing, especially when accounting for how polished he'd appear in contrasted to Vermont Sen. Bernie Sanders during any split screens they'd share.

But Bloomberg didn't take into account how much more dangerous a woman with nothing to lose can be. Bloomberg bought his way into the party, but Warren walked away with the media attention, making mincemeat out the former New York City mayor. Making the trouncing even more delicious is realizing he never saw Warren coming.

That's not entirely his fault.

The media narrative had all but written off Warren heading into that debate. She finished third in the Iowa caucus, but cable news and national newspaper coverage preferred to obsess over the split between Sanders and Indiana Mayor Pete Buttigieg at the top, and former Vice President Joe Biden's downward slide. Analysts and pundits love digging into the reason the mighty fall, and they love an underdog story.

Warren's problem in all this was that she more or less held steady, although she did have an interesting story to tell after Iowa. Although she only won a single county, she garnered most popular support in that state's bluest and reddest counties, according to the Des Moines Register.

News reports made her performance in New Hampshire out to be even worse because she failed to finish strongly in a state neighboring her home turf – and due to Minnesota Sen. Amy Klobuchar's emergence from behind to score a third-place finish to Warren's fourth. Political analysts love a dark horse even more than an underdog. Plus, one cannot underestimate the amusement value content producers must have placed in trying to make "Klomentum" into a thing.

Toss in a pair of polls that came out the day before the debate that excluded Warren from head-to-head theoretical match-ups with Donald Trump and other candidates . . . even though, as the NBC News/Wall Street Journal poll indicated, her numbers remain competitive.

That poll placed her in a virtual tie for second place with Biden and Bloomberg and yet, the head-to-head matchups – you know, those hypothetical barometers of "electability" –preferred to test Buttigieg and Klobuchar even though Warren pulls higher numbers than both, in this data set and nationally. Put all that together, and that notion of Warren being finished starts to feel true.

Taking all of this into account, what else was here for the good senator from Massachusetts to do but toss aside her dedication to being the cool-headed unity candidate with all the plans and go for Bloomberg's throat? For Warren, taking down a fat cat is on brand, and it proves she knows how to fight.

It also served the vital purpose of hitting the "undo" button, for now, on her media erasure. She and her supporters complained about it, and some called them whiners. But there is truth to their protests – Warren was being edged out of the game by TV news and other outlets, something of a customary practice for political journalists in an election year. A candidate is only as electable as his or her story, and when that story runs its course or a better one emerges, their run ends.

Ascribing blame to the media-at-large's failure to grant equal coverage to every candidate is a losing tactic for a political contender. Let's just go ahead and put that out front. In a field that began with more than 20 candidates, weighing every person's odds evenly is impossible.

Now that the field is much narrower, though, it's hard not to see the efforts being made to promote some narratives over others. Maybe we discounted it more easily with other candidates, but now that we're in the midst of the caucuses it's particularly strange to see it in action with a candidate who until recently was still polling well.

The reigning theory seems to be that presidential candidates rise and fall mostly on their campaign's merits, their ability to connect with the voters and the public and, to some degree, their history. (That part is truer for some candidates than others; look at who's in the White House) There's all that, and the money. Especially right now, a candidate's ability to stay in the race comes down to whether he or she can afford to go the distance.

Naturally news coverage, especially TV newscasts and topical discussion programs, has a substantial impact solidifying that hard-to-define image of electability, the political wonk's version of je ne sais quoi. And much of that aspect of those cyclical cable news discussion comes down to the reading of polls.

When and if at some point the polls turn on the popular candidates, then pundits, reporters and analysts pile on. And the polls always turn and shift early in the game, right up until the last moment. The topmost information in these measurements drive the direction an organization's coverage takes, and the story a newsroom decides to tell about a candidate, even though in 2016 we were rudely awakened to the fact that polling data can be very, very off.

A sadder truth is that some candidates never had a fighting chance – even when MSNBC, CNN and the rest gave it to them. This isn't referring to the likes of Marianne Williamson or Washington Gov. Jay Inslee; Inslee mostly ran in a quest to get climate change on to the Democrats' national platform while Williamson . . . was interesting.

But candidates like California Sen. Kamala Harris and entrepreneur Andrew Yang could only win with journalists and cable news hosts up to a point.

They were very different contenders with disparate campaign styles and platforms. Harris entered the race as a familiar name, an established politician benefiting from a tailwind thanks to her performance in televised hearings. But her past as a California attorney general who won office on a tough-on-crime platform was a constant drag on her chances.

Despite her celebrated shellacking of Biden over the summer, there came a point at which the story of her campaign suddenly shifted as one of great hope to one of implosion. In a story Lizzie Skurnick wrote for Dame in October of 2019 she cites a July profile that ran in the New Yorker as the beginning of the end. Even if you didn't read that, you may have experienced its rolling effects.

National news frequently reminded us of the support Biden had among African American voters and also reminded consumers that Harris, a black woman, was struggling to win over her own people. Her poll numbers didn't change much, and eventually started to decline.

Media analyst and blogger Jeff Jarvis, who was upfront about his support for Harris and his disdain for, in his words "the tyranny of the public-opinion industry," posted this predictive step-by-step list of how coverage of Harris' campaign became a "classic case of media's self-fulfilling prognostication":

Again, there's the caveat of knowing Jarvis supported Harris – but he wrote this in November, a month before Harris dropped out of the race. Even before he did this, another Harris supporter began compiling a Twitter thread in October of all the instances in which news outlets erased Harris.

You can more or less sub in Warren for Harris on that list, and the points still hold.

What about Yang, who dropped out of the race after the Iowa caucus.? Yang was always treated as a novelty, and his universal basic income platform was never taken seriously. But he consistently pulled decent poll numbers – often better than fellow Democratic primary contenders like former Obama-era Secretary of Housing and Urban Development Julian Castro and New Jersey Sen. Cory Booker.

Booker and Castro have name recognition and political track records, and were therefore included more regularly in analysis, substantive discussions about candidate platforms and even onscreen graphics, than Yang. And early on this mainstream media favoritism toward known political quantities led to Yang's angry supporters to create the hashtag #YangMediaBlackout. That earned limited coverage but mostly a lot of eye-rolling.

But scan a lengthy list of examples in which major news channels either omitted Yang from conversations about the field of candidates, like the one Yang supporter Scott Santens has compiled, and one can't call their complaints baseless.

But then, Yang and Harris never enjoyed the generous odds assigned to Warren early in this process. Each of their campaigns battled unique setbacks and flawed messaging that contributed to their exits. And they didn't fade into irrelevance; Harris remains in her Senate seat, and this week CNN announced it hired Yang to be a contributor.

However, if the accepted wisdom of 2016 is that cable news' coverage of Donald Trump amounted to $5 billion in free advertising, the same currency value must be taken into account when viewing news organizations' collective decision to starve a candidate of coverage or prioritize the value of one candidate's campaign over another's even if that chosen candidate isn't necessarily polling as well as the one being sidelined.

In late summer and well into autumn, Warren was golden until she stumbled over a Medicare-for-all question in an earlier debate. The New York Times notably and strangely endorsed both Warren and Klobuchar as the best candidates of the current field, which was frustrating.

In the run-up to Iowa Warren's noble uphill battle transformed into a wall – one of her own making, so the story goes. Warren herself admitted she came across as too soft and hesitant in the Feb. 7 debate that preceded Iowa.

But even before that, vacillating over Warren's ability or inability to beat Trump had become a sport, with some personalities slyly wondering, by way of ruminating on her electability, whether she was too strident or came across as too professorial in explaining her numerous policy proposals (which we are to read as: like a school marm).

"It's worth reflecting on the fact that Warren and Bloomberg are in about the same position in national polls, but the media takes his chances a lot more seriously than it takes hers," pollster Nate Silver pointed out on Twitter the day before her Vegas smackdown.

How about now? The latest RealClearPolitics average of national polls shows that Warren is in fourth behind, in order, Sanders, Biden and Bloomberg. She's also ahead of Buttigieg, Klobuchar, Tom Steyer, and Tulsi Gabbard; out of those four, only Buttigieg is polling in the double digits.

In the wake of Vegas, Warren has – among other appearances given an interview to NPR – appeared in a CNN town hall and popped up on MSNBC, making the most of her return to the spotlight. Her campaign raised $5 million in less than 24 hours, and a super PAC formed in her name is purchasing advertising in Nevada and the next caucus battleground, South Carolina – even though she previously disavowed super PACs.

At the same time there's a suspicion that with more than 75,000 Nevadans having already cast their ballots in early voting, not much can be done to change what happens there. And that's a shame because from a TV news coverage point of view, her story is starting to get good again.