The United States may be on the verge of a huge leftward shift. Here's what to expect 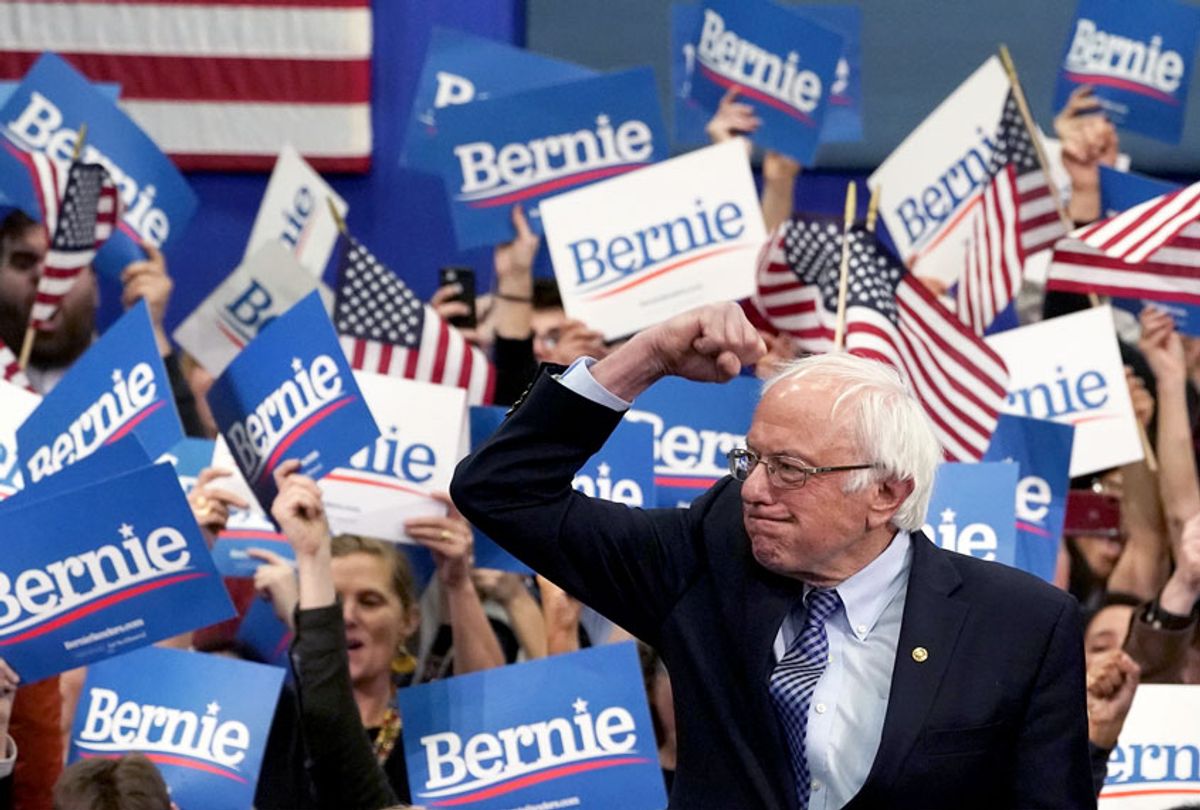 Adapted from “Bigger than Bernie: How We Go from the Sanders Campaign to Democratic Socialism,” by Meagan Day and Micah Uetricht, to be published on April 28, 2020 from Verso. All rights reserved.

A new socialist movement is cohering in the US, thanks in large part to the popular class politics of Bernie Sanders. But as that movement grows and progresses, it is bound to run into dangerous obstacles and thorny contradictions. The new US socialist movement is without a single "line" or monolithic political position. That's a strength of the movement, since none of us has all the answers. Still, many people in the movement, ourselves included, feel strongly about certain approaches to strategy. One approach we feel strongly about is what we call "the democratic road to socialism," or the idea that we need to make good use of the democratic structures and processes available to us (and to improve and expand them) in order to advance our cause.

A country like the United States has both a well-developed capitalist state, beholden to the capitalist class and armed to the teeth, and mechanisms for democratic participation in that state that allow people to exercise some measure of control over their representatives. Even though their choices are limited, their representatives are bought off by the rich, and the capitalist class holds the entire system hostage with the threat of devastating economic retaliation if things don't go their way, the system does have some basic democratic elements that its citizens largely affirm and occasionally participate in.

This is a tricky situation to navigate. If the democratic capitalist state were less developed, it might be possible to convince people to simply storm the gates, tear up the old rules, and start fresh in a socialist society. This is what socialists tried to do in Russia in 1917: the state was weak and after centuries of autocratic rule it didn't have much legitimacy in the eyes of most Russians, so revolutionaries could get popular support for scrapping it and starting over.

The United States is hardly an exemplary democracy, and socialists must push to further democratize elements of the state. But even if people are unhappy about much of our corrupt political system today, it does hold a strong degree of legitimacy in most citizens' minds. Despite Republicans' continued efforts to restrict the franchise, most people can vote, and they see the results of elections as basically lawful and valid. People often (rightfully) feel dejected and cynical about US electoral politics, but they don't consider the system so illegitimate that they're willing to risk their lives to destroy it anytime soon.

Mass numbers of people are going to treat elections as the main arena for their political frustrations and aspirations, at least for the time being. These are objective conditions over which we have no control. The question we must face is whether we join them in the democratic sphere, giving socialist and class-struggle character to fights playing out in the electoral arena, or sit those fights out and miss the opportunity to engage with people by getting in the ring ourselves.

The democratic road strategy does not assume that we'll simply stack up reforms until we look up one day and have socialism. Social change is more complicated than that, happening as it does in fits and starts, often with brief periods of great advance and long dry spells in between. Capitalists won't let us slowly but surely inch our way toward a new society; at some point, probably around the time our advances start decisively challenging their control over industry and their profits, they're going to try to tear us down by any means necessary.

But reforms do have a major role in building socialism, and not just for the purpose of spreading our message. By engaging in mass democratic politics, and electing politicians faithful to our movement who can spearhead the fight for real reform (including democratizing the current state), we can tip the balance of power in favor of the working class.

That balance is decidedly not tipped in our favor today. The power of the capitalist class is now so great that it can punish cities, states, and countries whose working-class movements have successfully won gains for workers against bosses. The punishment doesn't even have to be intentional: by simply following their mandate to maximize profits, employers are naturally inclined to close shops whose labor costs make them uncompetitive and move to regions where workers are less powerful, demoralizing movements and wreaking economic havoc on the people who fight back the hardest. This is the story of manufacturing in the United States, especially over recent decades—companies have constantly moved operations, first within the country, from high-wage markets to relatively low-wage ones, then across the border or overseas, to countries with even lower wages like Mexico or China. Bosses don't have to be evil to do this; the market compels them to. They may not want to tear down a community's economic foundation, but if they don't, their competitors will undercut them.

To stop this race-to-the-bottom cycle undercutting workers' power and lay the groundwork for revolutionary change, we must erode the power of the capitalist class. We can accomplish that by, for example, imposing capital controls—measures that stop the free movement of capital in response to changing social and economic conditions. But to pass economic reforms as significant as these, we can't just agitate in the streets, as important as that is. We have to be in power.

Luckily for us, while contesting for that power comes with plenty of dilemmas we must be careful to avoid, it's also a fantastic opportunity. Without capital on our side, the project of contesting for state power becomes by necessity a democratic one. We achieve success in the electoral sphere when we've won over masses of people to our political agenda. Elections can be used to build mass working-class movements, and the project of wielding state power can be used to clear the path for those movements as they confront their class enemies.

Chris Maisano describes the democratic road as a strategy that pursues "election of a left government (likely over multiple contested elections) mandated to carry out a fundamental transformation of the political economy, coordinated with a movement from below to build new institutions and organizations of popular power in society."

Eric Blanc offers a similar formulation. Eventually, after the Left has won significant gains at the ballot box and in civil society, the capitalist class will take the gloves off against socialists and do whatever it takes to destroy our movement. We'll need to fight back. The democratic road to socialism seeks not to elide this confrontation, but to make it possible. To replace capitalism with socialism, writes Blanc, "(a) socialists should fight to win a socialist universal suffrage electoral majority in government/parliament and (b) socialists must expect that serious anti-capitalist change will necessarily require extra-parliamentary mass action like a general strike and a revolution to defeat the inevitable sabotage and resistance of the ruling class."

Though socialists are likely to be met with capitalist resistance that at times will turn violent, "revolution" doesn't necessitate mass bloodshed — and though we believe in self-defense, we certainly do not advocate violent means. A future socialist government, the late Marxist thinker Ralph Miliband wrote, "has only one major resource, namely its popular support." To pull off a revolution in our circumstances, that popular support would need to be mobilized both inside and outside of government.

Adherents of the democratic road strategy don't claim to know the precise sequence of events that will lead us to socialism, nor do we pretend it will be a cakewalk to eliminate capitalism, even with our people in power. Past attempts to make such transformations in countries like Chile and France have been stymied, as we'll get to later in this chapter. But we do know that the United States will not be able to achieve anything like socialist governance, and join other nations in the project of building international socialism, without both a mass movement of workers and the formal power to stop capitalists from undermining that movement as it engages in class struggle. We see engagement in electoral politics as an important tactic for accomplishing both of these goals, and ultimately bringing about a scenario in which the working class can actually win.

We've seen that left elected officials can not only win office, but can widen the scope of political possibility even when they're only a small minority of legislators in a given elected body. For a socialist movement that's been in the wilderness for at least half a century, these new developments are crucial. But it's not enough for socialists to be a tiny minority in the House of Representatives, or run inspiring but failed campaigns for president, or hold only 10 percent of seats in a city council. Our aims have to be much bigger than that. We don't want simply to fight against some other political majority—we want to become the majority, and believe we can get there.

Once we do, we will have to think very seriously about what our program should look like and how we will fight the capitalist backlash that will follow. If we aren't prepared for it, we're doomed to fail.

Adapted from "Bigger than Bernie: How We Go from the Sanders Campaign to Democratic Socialism," by Meagan Day and Micah Uetricht, to be published on April 28, 2020 from Verso. All rights reserved.