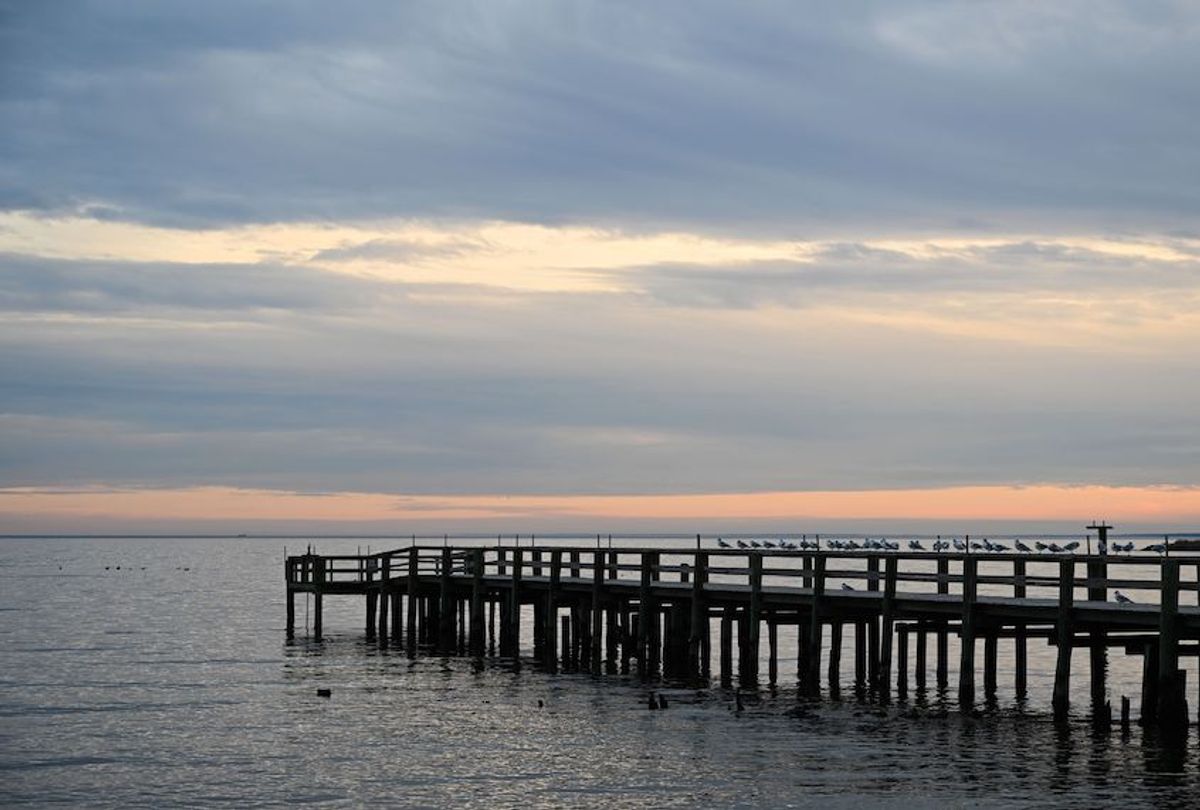 The sun sets over a fishing pier at Columbia Beach in Shady Side, Maryland, January 2, 2020. (Eva Hambach/AFP via Getty Images)
--

Trump once again is trying to cut most of the funding to clean up the polluted Chesapeake Bay even as the Trump EPA undermines the cleanup with legal footnotes and inaction.

Trump's latest sabotage, for the 2021 budget, would cut more than 91% of the funding for the Chesapeake Bay Program created under President Ronald Reagan who called the bay a "national treasure" and long supported by Republicans and Democrats. The program got $85 million, the most it's ever received, in the fiscal 2020 budget.

Dana Aunkst, the director of Chesapeake Bay efforts for the EPA, said 2025 pollution goals are "an aspiration," not an enforceable deadline. The head of EPA's Office of Water, David Ross, represented the American Farm Bureau Federation in its 2012 lawsuit against the EPA over plans to clean up the bay. Scott Pruitt, Trump's first pick to head the EPA, also supported polluters in the lawsuit as the attorney general for Oklahoma.

"For the head of EPA's Bay Program to say pollutions limits designed to save the bay are merely aspirational and not legally enforceable should put fear in the hearts of all who care about clean water," said Will Baker, president of the Chesapeake Bay Foundation.

In 2010, under President Barack Obama, six states and the District of Columbia agreed to significantly reduce pollution by 2025. The EPA agreed to step in if that didn't happen.

More than 100,000 streams and rivers flow into the Chesapeake Bay which is about half freshwater and half saltwater. The second-largest river, the Potomac, flows by Washington, D.C.

Pennsylvania, Aunkst's home state, has been the worst-performing state involved in restoring the bay. Maryland and Virginia also failed to meet 2017 cleanup requirements. Pennsylvania's most recent plan says the state is about 30% closer to meeting its goal for nitrogen pollution reduction than it was in the 1980s. Pennsylvania has a funding deficit of $324 million a year. The Trump EPA signed off on the plan in any way in December.

The bay has gradually been getting healthier for about three decades. A 2018 report card from the University of Maryland Center for Environmental Science gave the bay a "C." The Chesapeake Bay Foundation gave the bay a "D+," noting that the bay had worse levels of nitrogen and phosphorus and that the water was murkier. Record rainfall from climate changepushed more pollution off farms and streets and into the bay.

Pollution from fertilizer, sewage and other sources causes a dead zone in the bay each summer like the one in the Gulf of Mexico although much smaller. The dead zone in 2019 was on the high end of the normal range despite the deluge of water from swollen rivers, another indication that things are slowly improving.

The American Farm Bureau Federation and other pro-pollution groups sued over the cleanup. Part of their argument was that the Clean Water Act prohibits the EPA from seeking "reasonable assurance" from states that their plans will work. Judges disagreed.

In its most recent evaluations of state plans, the Trump EPA replaced "reasonable assurance" with the lesser standard of "confidence," noting in a footnote that the language was changed "to avoid potential confusion."