Do the Russians want Bernie to win? Not really — they want Democrats to turn on each other

Whether you support Sanders or someone else, there's a lot you can do to help stop Russian efforts to sow division 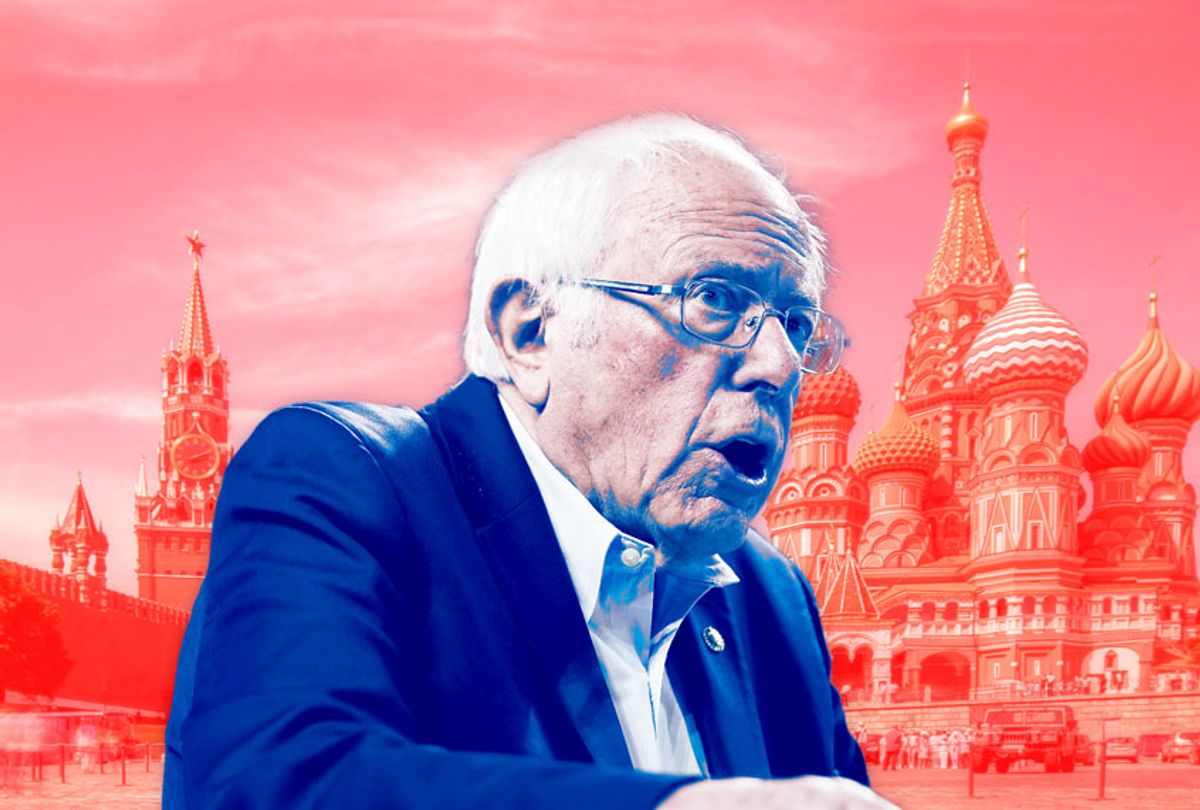 Late on Friday, the Washington Post published a story that caused major ripples through the progressive political world, headlined, "Bernie Sanders briefed by U.S. officials that Russia is trying to help his presidential campaign." This report was a follow-up to a similar report, from earlier in the week, that Russian intelligence agencies, as in 2016, are seeking to interfere in the 2020 election with an eye towards re-electing Donald Trump.

The responses from Sanders and Trump to these twin revelations couldn't have been more different. Sanders released a statement saying, "My message to Putin is clear: Stay out of American elections" and noting that some "of the ugly stuff on the Internet attributed to our campaign" is likely coming from Russian agents and not supporters.

Trump, on the other hand, reacted angrily, denying the information provided by his own agencies and immediately replacing his acting director of national intelligence, Joseph Maguire, with an even more subservient and vastly less qualified toady, Richard Grenell. Unsurprisingly, the new appointee immediately made sure to release a report denying that Russia is helping Trump, a bit of obvious propaganda that should fool absolutely no one.

This whole situation is no doubt highly confusing to many people. Why would Russia be supporting both Trump and the man who is currently leading the Democratic primary campaign? Especially since, as demonstrated by these differing responses, only Trump actually seems interested in accepting the assistance of Russians who are spreading disinformation online?

The answer is simple: Russia is not actually trying to help Bernie Sanders. The Kremlin wants Trump to win. What Vladimir Putin's spooks are interested in is not even really Sanders himself, but in exploiting his candidacy to sow chaos.

See, Russian intelligence understands that there is both a subset of Sanders supporters and a subset of anti-Sanders Democrats who are overly eager to engage in hysterics and abusive behavior. And that conflict, between the abusive online "Bernie Bros" and the more histrionic Sanders opponents, has great potential to sow divisions in the Democratic ranks and drive down general election turnout, whoever the Democratic nominee eventually is. Which, in turn, helps Trump.

As Russian sources told GQ reporter Julia Ioffe over the weekend, "our candidate is chaos" and stoking these tensions is useful "for starting a pan-American brawl."

Trump himself understands this, as he frequently stokes conspiracy theories on Twitter, such as insinuating falsely that the Democratic party is somehow conspiring to deny Sanders the nomination. He doesn't do this because he likes Sanders, whom he calls "Crazy Bernie." He does this because he knows that this conflict between Democratic voters ultimately helps him.

The good news is that there a way to fight back against Russia's efforts to exploit the Sanders campaign: Everyone, Sanders supporters and opponents alike, "progressive" or "moderate," needs to simmer down and focus on the true enemy, which is Donald Trump (and his Russian backers).

I know, that's easier said than done, especially since both sides in this conflict are prone to minimizing the excesses of their own "team" and claiming that the other side is exaggerating or even making up the problem. So the first step, as is so often true in these situations, is admitting that the problem exists.

There has clearly been a tide of harassment and abuse from Sanders supporters, as experienced by the Culinary Union of Nevada, whose leadership was met with a deluge of harassing emails and phone calls calling them "bitches" and "whores" and threatening them with violence, for daring to criticize Sanders' health care plan. (It appears a large proportion of the union's members voted for him despite all this.) Sanders has denounced these attacks but has also resisted admitting the obvious, which is that his campaign attracts more of this ugliness than other campaigns do.

There are also plenty of Sanders critics who are going way over the top, such as MSNBC host Chris Matthews, who reacted to Sanders' landslide victory in the Nevada caucuses over the weekend to "the fall of France in the summer of 1940," an unfortunate comparison that casts Sanders, who lost family members in the Holocaust, in the role of the Nazi invaders.

So both pro- and anti-Bernie forces bear some blame here for letting things get out of hand. The good news is that means both sides can take measures to dial down the intra-Democratic tension and stop priming themselves for Russian efforts to sow disinformation and paranoia.

Here's some helpful steps that will keep everyone calmer and more focused on what really matters: Beating Trump.

Sanders supporters: Don't harass people. Not even if you think they "deserve" it. Did you see a criticism of Sanders from a lady online and you would like to shut her up by making fun of her childhood history of abuse? Here's an idea: Why don't you do literally anything else? Similarly, if you're a famous podcast personality who is angry that Pete Buttigieg claimed victory over Sanders in Iowa, perhaps find a way to vent that doesn't involve pornographic, violent homophobia.

If you think this kind of vicious behavior is encouraging undecided voters to come over to Sanders, I'm afraid it is definitely not doing that. Sanders can't win without getting those "resistance wine moms" on board, so be at least a little bit nicer to them, even if they remind you of your own mom making you clean your room.

Sanders opponents: The world isn't ending, so calm the hell down. Sanders is not a Communist, and isn't really even a socialist, under any meaningful definition of that term. He is an FDR-style social democrat whose platform is about expanding the social safety net, not about nationalizing industry or executing the rich. He is not sold out to Russia — that would be weird, since Russia under Putin is a right-wing kleptocracy and he is against such things. Realistically, he won't be markedly different as president than any other Democrat. So please stop freaking out.

Don't like it when Sanders tweets that he won't be stopped by the "Democratic establishment"? Well, guess what? When you freak out at him for a bit of silly political hyperbole, you are merely confirming to his supporters that the "establishment" is out to get him and encouraging them to donate more money to him. So stop shooting yourself in the foot with these overreactions.

Everyone: Conspiracy theories only help Trump, so cut it out. No, the DNC is not conspiring against Sanders. And no, Sanders is not working for Russia to undermine the DNC. But when you spread conspiracy theories either for or against Sanders, you are encouraging Democratic voters to distrust each other and bicker among themselves. Which, of course, is exactly what Russia and Trump want you to do. Here's a thought: How about not doing what Trump and Putin want you to do! Step one is don't spread conspiracy theories.

If you're being trolled, don't take the bait. I get trolled on social media by Sanders supporters (and probably some Russian bots) constantly, because I'm fonder of Sen. Elizabeth Warren than I am of Sanders, and I'm not keen on hiding it. I've found that liberal use of the block button, however, is the best response possible to such ill-advised tactics. I don't know whether these people are deliberately trying to demobilize the left and discourage people from supporting Sanders in the general election, or if they're just nimrods who don't know how ugly they look to outsiders. (Probably a combination of both.) Either way, arguing back just gives them the attention they crave and is a bad idea.

If Sanders is the nominee, he's going to need to beat Trump, and those trolls are hurting him. So I'm going to try to limit the reach of trolls by blocking them. I recommend you do the same if you're getting trolled. It's also good for your sanity.

Don't gaslight. Bernie Bros are real. So are the hysterical anti-Bernie people. If someone is feeling aggrieved by either category of people, it does no good to tell them they're imagining things. That's just going to make them angrier and more defensive. Instead of getting into a Trump-pleasing bicker-fest over the exact size and scope of a problem, or policing whether someone else is "allowed" to be irritated, find something else to do with your time. Take a walk, read a book and, hey, maybe volunteer for the candidate you support.

Right now, it looks fairly likely that Bernie Sanders will win the Democratic nomination. Or on the other hand, he may not! Either way, the eventual nominee will be hobbled mightily if the Russians and Trump succeed, as they did in 2016, in sowing bad blood between Sanders supporters and the rest of the Democratic coalition. The only way to fight back, no matter how hard it may be, is to stifle the urge to engage in intra-party bickering. To get through this primary and beat Trump in November, it's time to remember the wisdom of Thumper and, when in doubt, to say nothing at all. (Unless you're bagging on Chris Matthews, which is highly understandable. But even then, may I recommend gentle mockery instead of acting like his tomfoolery is the end of civilization?)