In "Life in Synchro," this hyperfeminist sport empowers women to work together

Director Angela Pinaglia spoke to Salon about making a film about what a sport means, not who wins 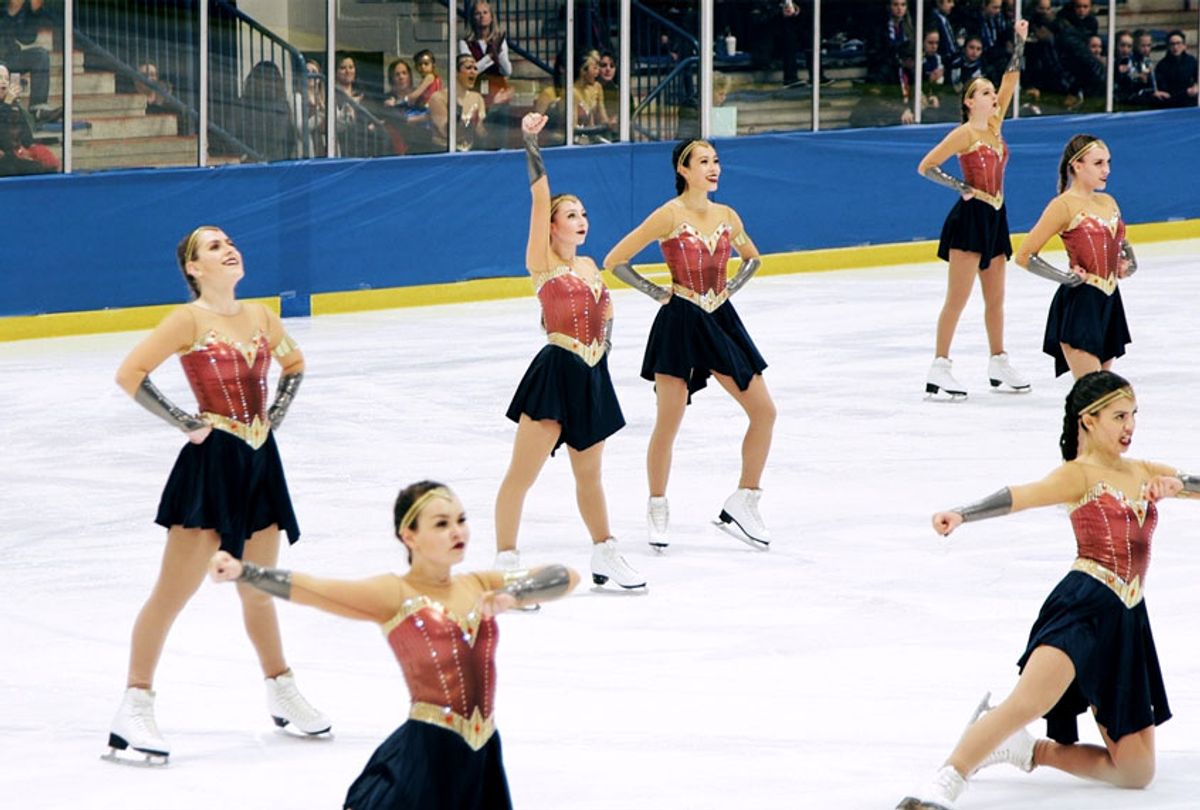 Life in Synchro (Half Life Films)
--

Haven't heard of synchronized skating? The sport, known as "synchro," has been around since 1956, when Dr. Richard Porter created it. Depending on the level, teams are typically comprised of 16 women — synchro is almost entirely female — who perform elaborate routines on ice and compete for titles. Alas, the sport has not yet been approved for the Olympics, but there are synchro teams in Australia, New Zealand, Japan, South Africa, and Turkey.

Angela Pinaglia's affectionate documentary, "Life in Synchro," screening at the DC Independent Film Festival (March 4-8) and the The Women's Film Festival in Philadelphia (March 20-29), chronicles the efforts of various women who participate in the sport. The documentary introduces Emily and her sister Cayty who are competitive; Heidi, an older woman who started synchro in her 50s for fun, and now, in her mid-60s, has no plan to quit; and Peggy, one of the original members of the Hockettes — the first synchro team Dr. Porter coached — who now coaches the sport.

Pinaglia's doc not only traces the history of synchro, but the empowerment it gives women, young and old, as it celebrates hard work, determination, and teamwork. The film shows that synchro is a sport that does not depend on the success of any one athlete, but a concerted effort from all involved.

Salon chatted with Pinaglia about her fun film and this underknown sport.

No. I'm not a skater, a figure skater, or a synchro skater. I wish I had their grace, strength, agility, and power. I have total respect for them. I couldn't get on the ice because I didn't want to risk injury. I had to make the movie. I filmed most of it myself. I couldn't have a cast on my arm or leg.

Someone in "Life in Synchro" says it is a sport you wouldn't know about unless you knew someone in it. How did you learn about synchro and why did you decide to make a documentary about it?

That's what happened. I'm originally from Miami and I moved to DC to get my MFA in film, and at American University, I met a snychro skater, and I didn't care about it. And then my friend said, "Come see it," and I saw it, and I had to know more. I asked her, "Why didn't you tell me about this?!" and she said, "I did! You didn't care!" Touché! I wanted to start a creative project, and there was nothing about synchro. She had access to folks and a coach, and I found out more. It took a year or more for me to fully appreciate it. People are diehard synchro fans. That's what's special about it, there are multiple ages, different skill level, and folks can be themselves and supportive and work towards this one common goal.

Can you describe some of the rules of the sport?

I didn't go into the rules in the film because it's complicated. The sport is constantly evolving, and the rulebooks change every couple of years. They are trying to get the sport to the Olympics. In the 1980s there were 32 skaters on the ice. Now it's half that. It's about moving in synchronization, and performing graceful, melodic storytelling on ice. On the competitive level, skaters will break off to jump or do a formation, but there are variations. However it is performed, there is emotion.

I like how you incorporate Peggy, who is an original Hockette, older women like Heidi, as well as younger women like Emily to show the age range of the sport. How did you determine whose stories to tell?

From a filmmaking perspective, it boils down to access. I didn't realize Peggy would be such an important character early on. I knew she was on the Hockettes, but then I saw she coached the 1984 Fraserettes team. I didn't include the best synchro team in the country because they didn't want to be filmed. If I had, it would be more about the competition and not these other stories. The DownEasters, Heidi's team, were fun and so easy to film. The film ended up being what the sport means, not who wins.

Yes! I like that the film isn't a competition doc, where we are following the team through an intense season — though there are moments of that. What can you say about the approach you took to telling the story?

When I started filming, I thought it would be a traditional sports doc, and I'm not a sports fan, which is why it's ironic that I made this! I had limited resources, and access, but it was like providence that these random stories connected. It was the individual and universal story about a passion.

"Life in Synchro" has many sequences of skating. Can you talk about shooting these scenes?

I had to figure out how I was going to film this. You need to see the whole team moving but also up close and in motion. I wanted to show different teams, and routines, and I wasn't always allowed to film things myself. I had to license Emily's competition. I filmed on the sidelines at the moment or put a GoPro camera on Emily or the DownEasters to show what it was like to be on the ice. I tried to give viewers a visual sense of what the sport is like and an immersive experience.

What observations do you have about the way synchro empowers women?

Synchro is different in the sense there is a collective nature, and that's a feminine trait. Women work well together. The fact is that a man, Dr. Porter, started it because he saw a need for sports for his daughters. The reason I think it's so unique, it's hyperfeminist — it's really girly, but because it's so girly, it keeps men away. The absence of men creates a space for these women to do what I want to do. Emily says, "I am the man" when she does the lift. I was glad to have John, the coach, in there because there is a masculine aspect to it.

What about the coaches, who have different emphasis on the sport? John wants it to be fun, whereas the sisters Shannon and Holly are more competitive and more intense.

I think depending on what stage you are in life the sport is different. Heidi's team is about having fun, the alumni team is reliving their youth, and Emily's team are in it to win it.

How can folks find out more about synchro?

Anywhere where figure skating is popular there's likely to be synchro. U.S. Figure Skating said this is the fastest growing discipline. It's in the Northeast, the Midwest, and there's a team in Hawaii. [On] the west coast [it] isn't as popular, but there is a competitive team in San Diego. Go to U.S. Figure Skating website, but even there, there is not a lot of information. We hope the film will generate more interest for people to start looking for information.