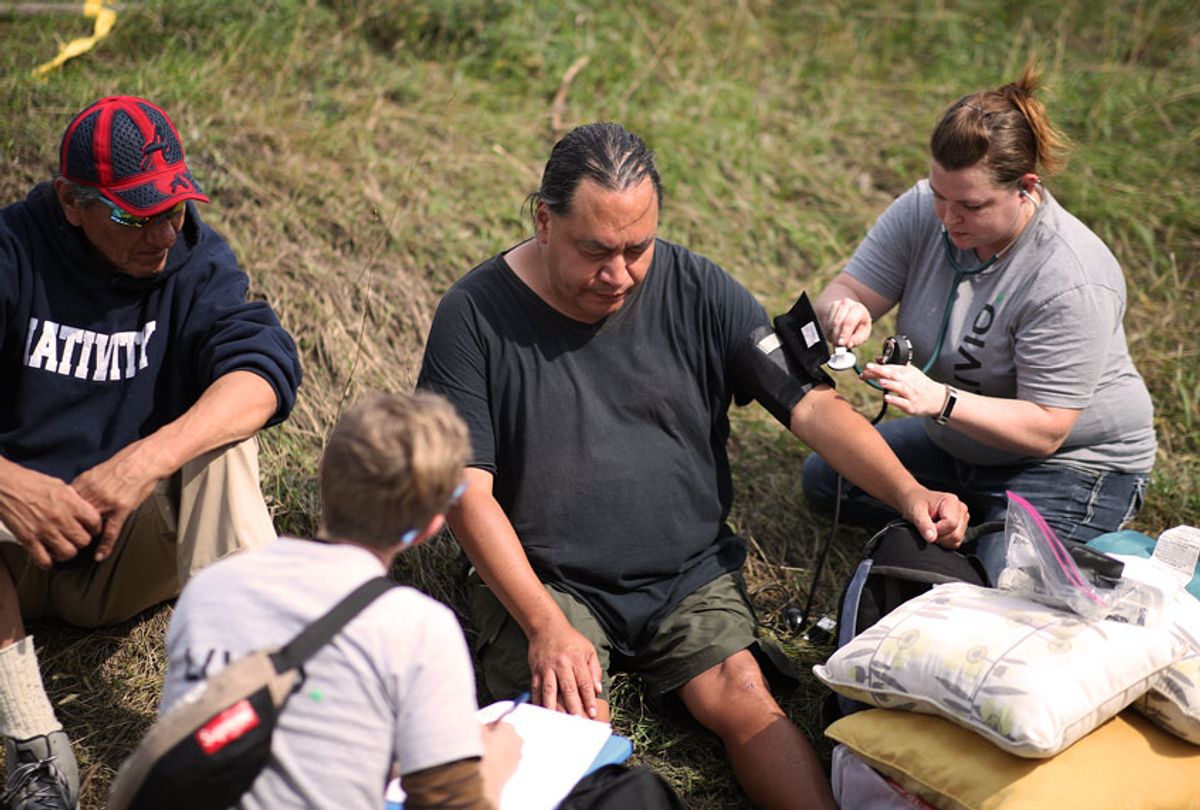 A team of nurses with Livio Health Group took the vital signs of Anthony Nichols 52, at the large homeless camp Monday September 24, 2018 in Minneapolis, MN. Nichols said that he has a heart condition and had not been taking his medicine; he was later transported to local hospital by ambulance. Nichols said that he had been staying at the camp for only two days. (Jerry Holt/Star Tribune via Getty Images)
--

There's a reason that the story about a Miami man receiving a $3,270 medical bill after fearing he had the Coronavirus Disease 19 (COVID-19) is going viral: it is a relatable cautionary tale for Americans accustomed to our piecemeal, overpriced, for-profit healthcare system. Despite the good news that Osmel Martinez Azcue tested for the flu, not the virus, Azcue is left with a significant financial burden. (The Miami Herald reported that hospital officials said he will only be responsible for $1,400, thanks to his limited insurance plan from National General Insurance. However, he will have to provide three years of medical records to prove that the flu, which he tested positive for, didn't relate to a preexisting condition.)

"How can they expect normal citizens to contribute to eliminating the potential risk of person-to-person spread if hospitals are waiting to charge us $3,270 for a simple blood test and a nasal swab?" Azcue told the Miami Herald.

He's got a point. Certainly, Azcue's story foreshadows the kind of havoc expected once COVID-19 begins to spread in the United States, which experts now think is inevitable. Lacking the universal healthcare plans of other developed nations, the United States' piecemeal, for-profit system essentially disincentivizes the uninsured and under-insured from seeking out testing for COVID-19, or even going to the doctor if they are sick in the first place.

Supporters of Medicare for All, a universal healthcare system plan for the United States, have already pointed out how the potential for pandemic would be far less with such a system in place.

"I can't tell you how many times the people who handle your food — who are already overworked and underpaid — show up sick to work because our country refuses to guarantee healthcare or paid sick leave," Rep. Alexandria Ocasio-Cortez (D-NY), a former bartender, wrote on Twitter.

On Tuesday, U.S. health officials said that Americans need to start preparing now for the possibility that more aggressive measures might be needed to stop the spread of the coronavirus in the United States. As of Wednesday, Feb. 26, there have been 14 confirmed cases in the United States; 12 of which are travel-related, and two that were spread from person to person. 445 people have been tested.

Meanwhile, Dr. Nancy Messonnier of the Centers for Disease Control and Prevention (CDC) told reporters on Tuesday in a press conference: "It's not so much a question of if this will happen anymore, but more really a question of when it will happen."

"We are asking the American public to work with us to prepare with the expectation that this could be bad," Messonnier said.

But Messonnier's warning for citizens to prepare for an outbreak abuts an inconvenient truth: An estimated 44 percent of Americans say they don't go to a doctor when they're sick because of cost. Another 40 percent have skipped medical testing, and about 30 percent said in 2018 that, over the past year, they had to choose between paying for medical bills or basic necessities like food or housing. In 2019, according to federal data, the number of Americans without health insurance increased to 27.5 million. Moreover, impoverished communities will be hit the hardest when, as Messonnier warned, the coronavirus spreads.

On Tuesday night, Democratic candidates once again took the debate stage to advocate for their assorted healthcare plans. While Medicare For All is often advocated from a moral standpoint — of health being an innate human right — the arguments for it change in the face of a potential pandemic. Indeed, the lack of universal health insurance leaves us vulnerable to a deadly public health crisis, as many experts argue.

"If we paid for fire departments the way we pay for healthcare, the fire department would charge high copays and let the homes burns down of families who couldn't afford the out of pocket costs ... and then if that fire were a virus, it would spread from house to house," Peter Kolchinsky, PhD, author of "The Great American Drug Deal: A New Prescription for Innovative and Affordable Medicines," told Salon in an email.

"So either the U.S. Government must fund development of a vaccine and treatments, likely by using tax dollars to contract with private industry to develop the drugs it knows how to develop, or Congress must ensure that all insurance plans be mandated to pay for testing, vaccination, and treatment, and then offer coverage for the millions of Americans who have no insurance,"  Kolchinsky continued.

There's a classist element to the outbreak, too. In a 2019 report, the Global Preparedness Monitoring Board explained that when there is a massive disease outbreak, the poor suffer the most.

Currently, the CDC is the only approved American lab to perform testing for the coronavirus. While it is not billing for the testing, those who have the coronavirus, or think they do, could incur out-of-pocket related costs.

Indeed, worries about preparedness extend to healthcare professionals, too, not just those who are worried about the financial barrier to receiving care. National Nurses United noted that, in a survey of 4,700 respondents from 48 states, only 9 percent reported that there is a plan in place to isolate a patient with a possible COVID-19 infection; 77 percent reported they didn't know if there was a plan.