Democrats aren't facing the big question: What will they do if Trump won't leave office?

Many debates, many useless questions: But here's the big one the Democratic contenders can't or won't answer 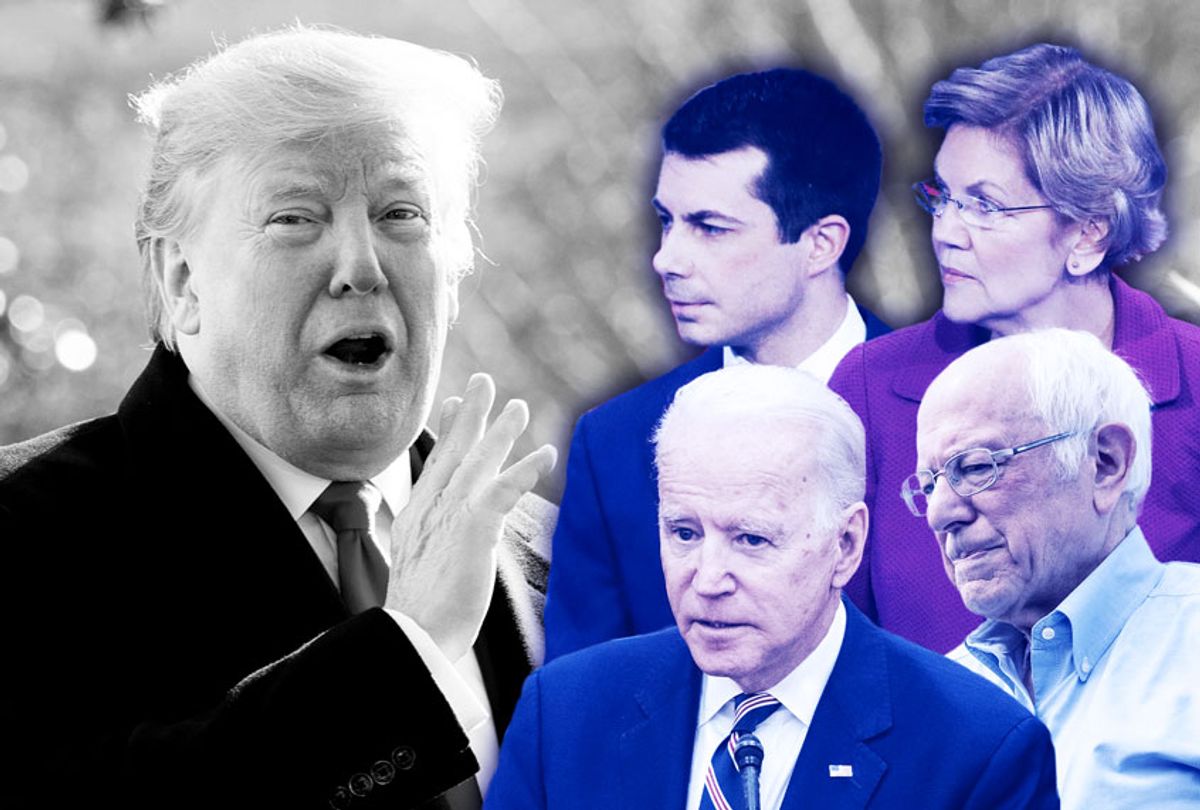 The 10th Democratic Party presidential primary debate was held on Tuesday night in Charleston, South Carolina. Although the atmosphere was frenzied and almost chaotic at times, it was much like those that came before.

To this point, the candidates have been asked questions about such topics as the economy, global climate disaster, immigration, tax policy, foreign affairs, health care, sexism, racism and other forms of social inequality.

These "debates" — which are largely scripted interactions where soundbites are offered in response to predictable questions — have had their moments of excitement. Last week we saw Sen. Elizabeth Warren's pummeling of former New York mayor Michael Bloomberg as though she were world heavyweight boxing champion Tyson Fury and he were some hapless club fighter. The debate in Charleston saw Warren continue her dismantling of Bloomberg. As the frontrunner, Sen. Sanders was also a prime target where the other candidates attacked him en masse but none were able to truly defeat him. Former vice president Joe Biden struggled to remain relevant.

These debates have also been tedious because there were (and are) too many candidates in the field — and most of them had no real chance of defeating Donald Trump on Election Day in November.

But in all these debates the Democratic Party's prospective presidential nominees have not been asked the most important question: What should happen if Donald Trump is defeated and then refuses to leave office?

In a moment when Trump is systematically undermining the rule of law, ignoring the Constitution, purging the government of anyone who places loyalty to democracy and the Constitution over personal subservience to him, and in total acting as though he were a king or dictator, the answer to that question is essential for the future of the country.

As of the first week of February, Donald Trump has "joked" at least 27 times that he plans to stay in office past the two terms allowed by the Constitution. Trump's propagandists have made similar statements, including outlandish claims that because Trump was impeached he is somehow now allotted extra time in office.

Writing at the Atlantic, Sarada Peri summarizes the clear and present danger of a lawless president who rejects the people's legitimate collective will:

Should the lying and cheating fail — should the Democrat manage to win the 2020 election — Trump will have one more trick up his sleeve. Before the 2016 election, he suggested that he might not accept a defeat. So who's to say that he will accept one in 2020? You don't have to squint hard to see the clues: He retweeted Jerry Falwell Jr.'s suggestion that he ought to have two years added to his term and "joked" about staying in office longer than eight years. If he loses in November, the litigious showman might claim that the election was rigged against him and theatrically contest the results in court.

The cumulative effect of Trump's efforts, of all the stains on his shirt, is to disorient the media and the electorate. Democrats, meanwhile, are fighting about how aggressive to get on climate change or whether debt-free college should be means-tested — bless their hearts. These are worthy questions, but not the question of the moment: How should they fight against a president who has no moral or legal compass, and who will use the full might of the executive branch to win?

Trump's refusal to respect democratic norms — and the law — is nothing new. As Peri notes, during the 2016 campaign Donald Trump repeatedly suggested that he might not respect the outcome of the election if he did not win

Although Pete Buttigieg may think otherwise, Trump's threats to remain in office indefinitely are not jokes. Like other autocrats and authoritarians, Trump is testing norms and boundaries as a way of expanding his assault on democracy and control over the country.

Trump was impeached for attempting to bribe and extort the government of Ukraine to interfere in the 2020 presidential election on his behalf. "Acquitted" by his Republican handmaidens in a rigged Senate trial, Trump is now flagrant in his public requests that other countries intervene in the upcoming presidential election to help him defeat the Democratic Party and contravene the will of the American people.

Last week, Donald Trump fired his acting director of national intelligence, Joseph Maguire. Why? Trump was enraged by intelligence reports that the Russian government is engaged — as it was four years ago — in a psychological operations campaign aimed at manipulating the American people into supporting his reelection.

Writing at Just Security, Alex Finley, John Sipher and Asha Rangappa describe Russia and Putin's threat to America and the strategy of using Donald Trump, the Republican Party, and their supporters as authoritarian chaos agents:

Putin aimed for chaos, and Donald Trump was the chaos candidate in 2016. But Putin will continue to attack, namely because his objectives haven't changed and the United States has not done anything to defend or deter him from this course of action. The only difference this time around is that, after four years of Trump, generating chaos will be even easier to achieve, as Trump and his surrogates have adopted the same playbook….

That situation is ripe for the covert actions of a hostile actor. Putin does not care if Trump wins. He simply wants to weaken the U.S. Making the country question the outcome of the most sacred part of democracy is a good way to do it.

Why haven't the Democratic primary candidates forcefully and clearly stated what they will do if Donald Trump is defeated in 2020 and then refuses to surrender power?

There are several reasons. To confront such an increasingly probable outcome would create an epistemic crisis, where what is taken to be true, constitutes knowledge, and exists as empirical reality and verifiable facts would be left upside down and discombobulated.

Generally, politicians are deeply invested in the system as it exists. That system provides them emotional and financial support, social capital and a broader sense of identity, self and ego gratification. To confront an existential crisis in America's democracy means that the Democratic Party's presidential candidates and other leading figures would have to engage in an act of profound and painful critical self-reflection, because their belief system and related identities would be called into great doubt.

Whatever their individual policy differences may be, the Democratic Party's potential nominees and other elites believe in the fundamental goodness of America. They also believe in American Exceptionalism. To be forced to confront the question "Could it happen here?" is to consider something impossibly frightening for them.

For similar reasons, the debate moderators avoid asking questions about Trump's possible or likely refusal to honor or recognize constitutional order if he is defeated in November. Moreover, the moderators are deeply invested in maintaining the appearance of normalcy by reinforcing an illusion that America's democracy and political culture are not, in fact, experiencing an existential crisis.

The Democratic Party's presidential primary candidates must also provide a response to this scenario, outlined by Barbara McQuade in the Atlantic:

Although Trump's remaining in office seems unlikely, a more frightening — and plausible — scenario would be if his defeat inspired extremist supporters to engage in violence. One could imagine a world in which Trump is defeated in the 2020 election, and he immediately begins tweeting that the election was rigged. Or consider the possibility, albeit remote, that a second-term Trump is removed from office through impeachment, and rails about his ouster as a coup. His message would be amplified by right-wing media. If his grievances hit home with even a few people inclined toward violence, deadly acts of violence, or even terrorist attacks against the new administration, could result.

Ultimately, the key to the peaceful transfer of power is the conduct of the outgoing leader himself. America has thus far been lucky in that regard….

But if Trump should fail in his final duty as president to transfer power peacefully, the nation's laws, norms, and institutions will be responsible for carrying out the will of the electorate. Should those fail too, then the American experiment's greatest achievement will come to a grinding halt, and with it the hope that a republic can ever be kept.

Perhaps most ominously, in an op-ed for the Washington Post, retired Adm. William McRaven wrote about the dangers to America represented by Trump and his regime:

As Americans, we should be frightened — deeply afraid for the future of the nation. When good men and women can't speak the truth, when facts are inconvenient, when integrity and character no longer matter, when presidential ego and self-preservation are more important than national security — then there is nothing left to stop the triumph of evil.

The American people must force the Democratic Party's presidential candidates, and its eventual nominee to answer this crucial question: What should be done if Donald Trump refuses to leave office in 2020?

How a given candidate answers that question is like a final exam which should help the American people assess if that person is capable of being the next president of the United States — and capable of doing the long, hard, difficult and necessary work to restore and repair America after the great harm caused by the Age of Trump.