"India's capital has descended into deadly riots over religion." 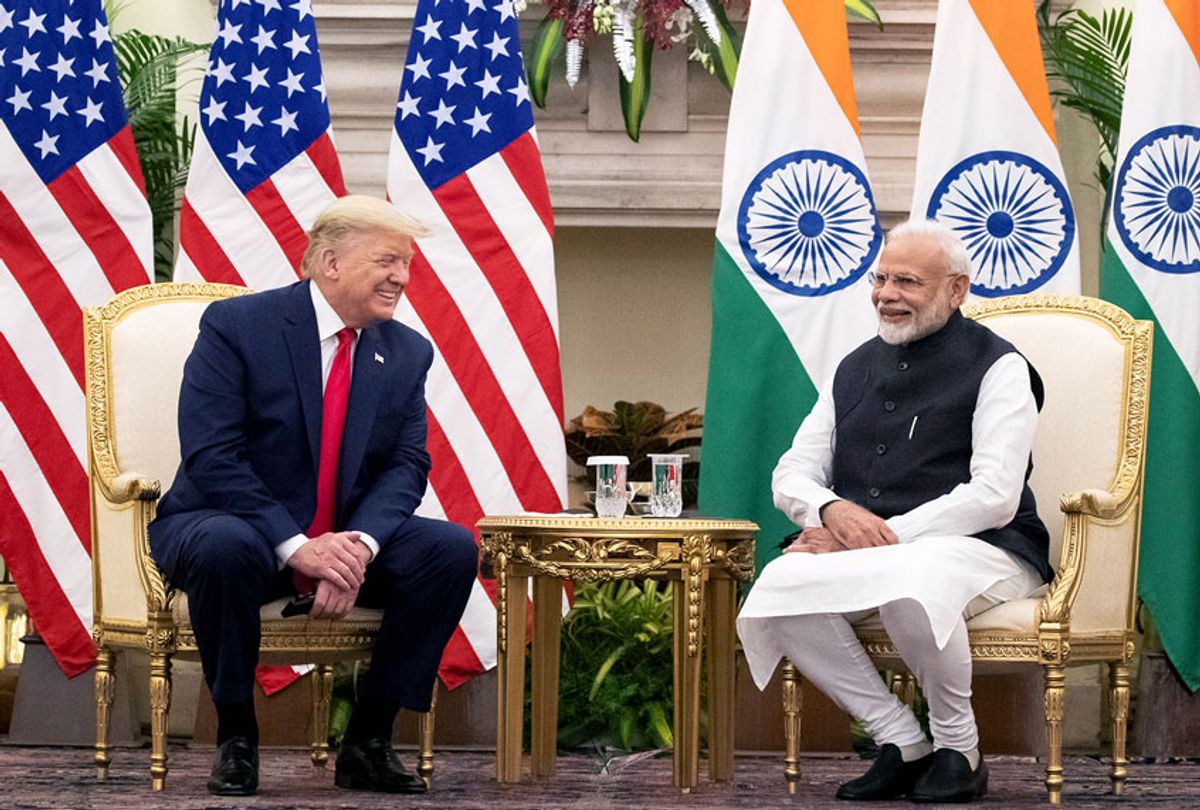 As President Donald Trump left India Tuesday after a state visit to the world's largest democracy that saw Prime Minister Narendra Modi's right-wing government signing a $3 billion arms deal with the U.S., attacks on Muslims in New Delhi that coincided with the trip killed at least 13 people in the worst violence in the city in at least two decades.

"Muslim friends in Delhi are contemplating leaving the city, some are already leaving for fear of riots spreading across Delhi," tweeted journalist Rana Ayyub.

The clashes in New Delhi began on Sunday, just before Trump arrived in India for a whirlwind 36-hour visit that included a massive rally at a cricket stadium in Ahmedabad and a visit to the Taj Mahal in Agra.

"While Trump and Modi glad-hand and swap platitudes, India's capital has descended into deadly riots over religion," tweeted Australian Broadcasting Corporation reporter Siobhan Heanue. "Much of the eyewitness (dare I say participant) footage I'm seeing on social media and WhatsApp groups is too gruesome to share."

"What is happening in India is terrifying and it's been inevitable; the Hindutva rhetoric has been one of violence," said Saeed. "Some of the civilian reports coming out of the country are pointing to a worsening of violence — mosques being attacked, mobs surrounding Muslim homes."

Caravan, an Indian outlet, detailed the connections between violence in Delhi to Modi's BJP:

It should be noted here that all the areas from where violence is being reported are ruled by the BJP. All the areas which have witnessed targeted communal violence — Maujpur, Chand Bagh, Karawal Nagar, Bhajanpura, Babarpur, among others — come under the Karawal Nagar, Ghonda, Rohtas Nagar, and Ganghi Nagar assembly constituencies which the saffron party won in the February 2020 polls. In addition, these four assembly seats come under the North East Delhi Lok Sabha constituency which is represented by Manoj Tiwari, the BJP's Delhi chief. All of these areas have a sizeable Muslim population, enough to polarise the localities.

The violence is connected to the ongoing protests against India's divisive citizenship law, but this was the first time that the protests have set off major bloodshed between Hindus and Muslims. It's an old and dangerous fault line, and any sign of communal violence raises alarm instantly.

On Tuesday, Trump claimed in a press conference that Modi's government has "worked very hard to have great and open religious freedom."

As Common Dreams has reported, India's citizenship law is targeted at stripping rights from Muslims and the country is building concentration camps to house Muslims in the country's northeast.

Video from Delhi showed buildings on fire and police forces ignoring the violence.

Al Jazeera's Saeed connected Trump's visit to the explosion in violence, noting that Modi and his movement already have blood on their hands, a reference to the prime minister's alleged support for riots in the state of Gujarat that left nearly 800 Muslims dead in 2002 when he was the state's governor.

"That this recent burst of anti-Muslim violence comes during Trump's visit to India is only proof of not only Trump's own legitimizing power of violence against Muslims but also the Pavlovian fascist reactionism in India to a fascist like Trump," said Saeed.