Trump unbound: President escalates attacks on the courts — and reporters do stenography

Trump's attack on two female Supreme Court justices was grotesque and abnormal. Why won't reporters even say so? 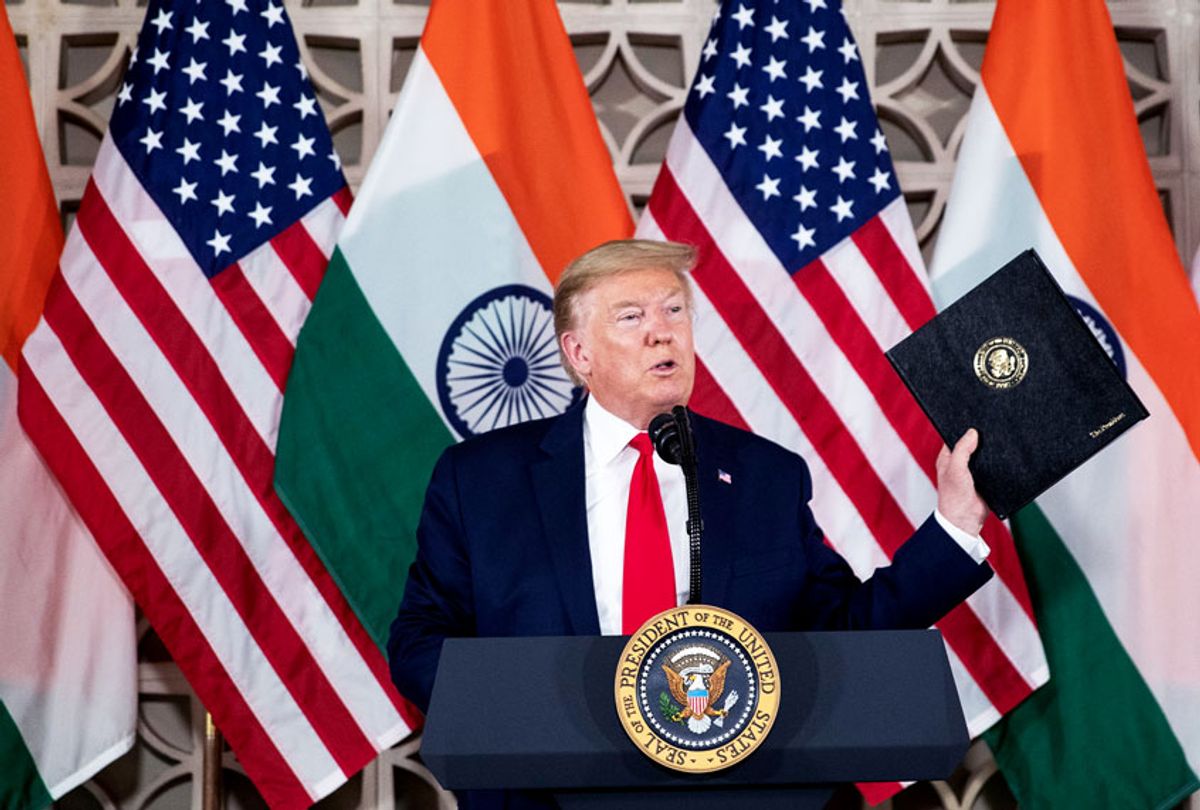 U.S.President Donald Trump holds up his prepared speech that he didn't use as he speaks with business leaders at a roundtable event at Roosevelt House, Tuesday, Feb. 25, 2020, in New Delhi, India. (AP Photo/Alex Brandon)
--

Donald Trump's browbeating and attempted bullying of two liberal, female Supreme Court justices by parroting Fox News propaganda on Tuesday was grotesquely abnormal behavior for a president of the United States, represented an escalation of his persistent and unprecedented attacks on the legitimacy and independence of the federal judiciary, and was a distraction from the real news of the day, which includes the fact that his visit to India has apparently incited mob violence against Muslims.

But reporters on the White House press corps just played it straight.

They quoted Trump at length, explaining that he was demanding that Supreme Court Justices Sonia Sotomayor and Ruth Bader Ginsburg should recuse themselves from cases involving him or his administration.

As if that was something the president could reasonably demand!

They quoted his inaccurate description of Sotomayor's dissent in a recent case, and his assertion that Ginsburg "went wild" during his presidential campaign.

Any attempt at all to contextualize his comments as outrageous and ill-informed — Reuters and Politico, for example, made no such attempt — came many paragraphs into their articles.

As it happens, there is nothing unusual about this — neither about Trump saying outrageous things, nor about the press dutifully and credulously broadcasting his words to the world.

But it shouldn't be that way.

What political reporters (and, perhaps more importantly, their editors) need to realize — and internalize — is that when Trump says something this ridiculous, what he said exactly isn't as important as that he said it.

The substance of what he said — the accusation, the insinuation, the lie, the canard, the drivel — isn't as newsworthy as the fact that he engaged in that kind of behavior.

Yes, of course you have to — briefly — tell people what he said, but only so they understand what was so wrong about it.

The New York Times' Peter Baker reported the story straight for paragraph after paragraph, quoting Trump and his tweets, patiently explicating what Trump was talking about and what he meant.

For instance, Baker explained that Trump's accusation of uncontrollable bias against him was based on "a dissenting opinion last week by Justice Sonia Sotomayor and a years-old comment by Justice Ruth Bader Ginsburg."

It wasn't until the 20th paragraph of the story (down from the 12th, in an earlier version) that Baker began to provide the most essential information:

But Justice Sotomayor did not overtly accuse Republican-appointed justices of being biased in favor of Mr. Trump, as the president asserted. She complained in her dissent that the court "is partly to blame for the breakdown in the appellate process," because it "has been all too quick to grant the government's" reflexive requests.

And then, a few paragraphs further down, an indication of how messed up Trump's whole rant was:

Mr. Trump did not seem familiar with what Justice Sotomayor actually wrote but instead seemed to be reacting to a headline that characterized her statement in a far balder, more political way than she had.

Asked by a reporter what exactly he found inappropriate, Mr. Trump demurred, saying "you know what the statement was."

When the reporter accurately summarized part of the justice's dissent, the president said, "No, I don't think that was it."

What can we tell from reading Baker's story? He realizes everything Trump was saying was bullshit. It's just that neither he nor his editors think it's the Times' job to say that directly. So he filed it straight.

By contrast, I can't even hazard a guess about what is up with Reuters and its veteran White House reporter, Steve Holland. The White House press office actually promoted one of Holland's articles on Trump's "raucous welcome" in India, presumably because it read like so much propaganda.

Holland's report on Trump's recusal demand was the worst kind of stenography, giving readers no indication whatsoever of how beyond-the-pale Trump's comments were.

One could get a much better sense of the real significance of Trump's comments on Twitter.

From Kristen Clarke, who heads the Lawyers' Committee for Civil Rights Under Law, responding to a Trump tweet:

From Wajahat Ali, a contributing op-ed writer at the New York Times:

From Matt Gertz of Media Matters:

Mark Sherman at the AP did a better job of providing some context, right at the top:

A month before the Supreme Court takes up cases over his tax returns and financial records, President Donald Trump on Tuesday made the unusual suggestion that two liberal justices should not take part in those or any other cases involving him or his administration.

And later, this crucial background:

Trump's comments were the most critical he has been of sitting justices since he took office, though he has not shied away from piling on complaints about federal judges who have ruled against him or, notably, convicted ally Roger Stone. Even as he was flying home from India Thursday, Trump tweeted from Air Force One that U.S. District Judge Amy Berman Jackson, as well as the jury foreperson for Stone's trial, were "totally biased."

Here's what is most significant about what Trump said: Post-impeachment, he is exhibiting even less restraint in his attacks on the judiciary than he did before, and there wasn't a hell of a lot before. (Why is that important? I wrote a whole white paper about that, more than two years ago!) We should be prepared for more undermining of the court's independence, particularly when it comes to investigating the president, including the pardon of Roger Stone.

You'd have no idea about that after reading Meagan Flynn and Brittany Shammas in the Washington Post, however. They wrote that Trump "went after" the justices via tweet, then "doubled down" during his news conference. Then they noted, in a vast understatement:

It's not unusual for a president to criticize decisions of the Supreme Court and the lower courts. Most have avoided singling out a judge or justice by name, as Trump does, or challenging their fairness and integrity.

Up until Trump, the height of presidential rudeness to the high court came when Barack Obama gently chided justices for their Citizens United decision during his 2010 State of the Union address. That set off a major media furor.