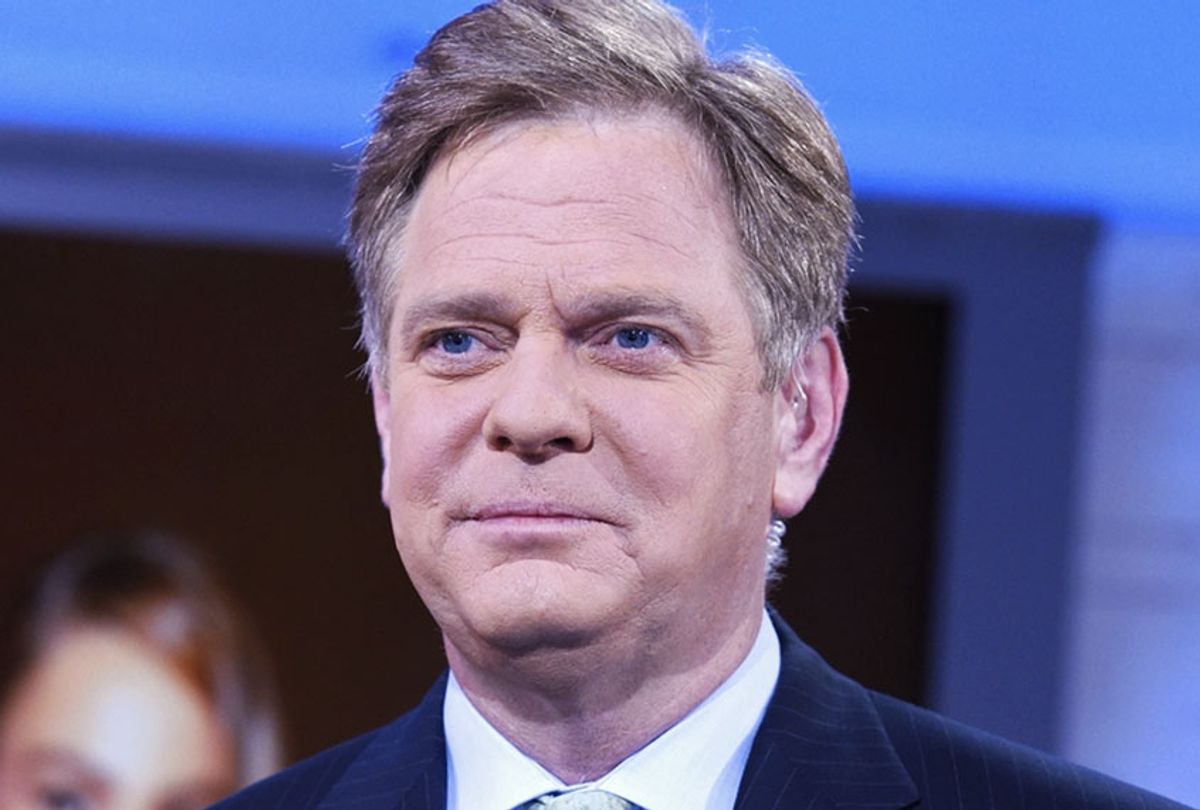 There are few things more loathsome than Project Veritas and its attempts to "sting" journalists in an effort to delegitimize the reality-based media.

But in its latest video, Project Veritas has done us all a favor.

The group's sneaky surveillance has uncovered someone speaking profound truths about how commercial pressures have skewed corporate media's political-news values — not toward making things up, but toward turning it all into shallow, value-neutral entertainment.

The truth-teller was David Wright, an Emmy Award-winning ABC News correspondent who's been with the network since 2000. And unfortunately for him — and the truth — when his bosses at ABC saw the video, they suspended him and reassigned him away from political coverage.

An anonymous statement from ABC News explained: "Any action that damages our reputation for fairness and impartiality or gives the appearance of compromising it harms ABC News and the individuals involved."

It's the latest example of a major media organization getting played by the right — overreacting out of panic to critiques from people who do not have journalism's best interests at heart.

Wright's comments did include a few ill-chosen words about Trump. In a version of the video tweeted by Donald Trump Jr., Wright calls Trump a "dick" and likens him to "the nightmare spouse you can't win an argument with."

But the vast majority of the comments on both videos involved Wright delivering a sophisticated and spot-on critique of his industry and his bosses.

It's not hard to imagine that's what ticked off ABC management the most.

The video on YouTube is choppy, and its makers have a history of deceptive editing, so there's no telling in what order Wright's quotes came. But here is some of what Wright said:

I feel that the truth suffers, the voters are poorly informed…

And so, it's like there's no upside in — or our bosses don't see an upside in — doing the job we're supposed to do, which is to speak truth to power and hold people to account.

I think some of that, at least in the places where I work and the  places like it, is that with Trump, we're interested in three things. We're interested in the outrage of the day, the investigation, and the palace intrigue of who's stabbing who. Beyond that, we don't really cover the guy. …

We don't hold him to account. We also don't give him credit for what things he does do. …

From the tweeted video:

We're not disciplined enough to cut him off, and we second-guess ourselves because we're sensitive to the accusation that, you know, we're in the tank for the Democrats. And so, that enables him. And we enable him. And it feels like every time we take the bait on the outrage, we enable him.

We fucked up four years ago, and we're fucking up in the same way today. …

And in addition to the candidate of the week, we need the story to move on, and so we're happy to have Buttigieg be the story last week, and we're happy to have Klobuchar as a new subject this week, and then when we're tired of her, we'll be delighted if Elizabeth Warren kicks ass in Nevada because then we have something new to talk about.

The commercial imperative is incompatible with news. …

It became a profit center, a promotion center. Like now, you can't watch "Good Morning America" without there being a Disney princess or a Marvel Avenger appearing. It's all self-promotion. And promotion of the company and also promotion of individuals within the company. As opposed to, kind of, the dedication to the story and a commitment to stories that we need to tell but that are maybe hard to tell. …

I think that we don't have the bandwidth to give everybody a fair shot. And we should.

Asked if he considers himself a "Democrat socialist":

Oh yeah, like more than that. I'd consider myself a socialist. Like I think there should be national health insurance. I'm totally fine with reining in corporations. I think there are too many billionaires, and I think that there's a wealth gap. That's a problem.

Maybe indiscreetly calling Trump a "dick" could legitimately elicit a talking-to from management. But pretty much everything else Wright said was truthful, if indelicate.

Wright, 56, is one of ABC's most seasoned and versatile correspondents, having joined the network nearly 20 years ago. He has covered the White House and was "Nightline's" lead political reporter during the 2016 presidential campaign. He has also periodically reported from the Middle East and Europe, including covering the Notre Dame Cathedral fire in Paris last year. He shared a 2004 Emmy Award for his reporting from Iraq and shared a Peabody Award for reporting in Afghanistan after the Sept. 11, 2001, terrorist attacks.

In the overreaction to bad-faith actors, Wright's situation is reminiscent of a recent incident at the Washington Post involving reporter Felicia Sonmez, who tweeted a link to a story about rape allegations against Kobe Bryant shortly after he was killed in a helicopter crash.

The suspension was later rescinded, as CJR's Hamilton Nolan wrote:

The masthead reaction sparked its own backlash from Sonmez and her colleagues in the Post's newsroom, the staff union, most working journalists, and anybody in the general public who cared about media. Shortly thereafter, the suspension was reversed, a not-actually-an-apology was issued by Post editor Marty Baron, and a bitter public discourse ensued about social media, the myth of journalistic objectivity, and the obligation of media companies to back their reporters.

Wright's suspension is already sparking a similarly bitter discourse, with many journalists jumping to his defense. Among them:

I agree with them all.

Wright said — out loud and, to his chagrin, on a hidden microphone — what so many other journalists feel and tell each other every day. We should listen. We should talk about it. And ABC should let him get back to his job.