"Altered Carbon" returns with a familiar story in a new skin, and not necessarily for the better

Anthony Mackie stars in the new season of Netflix's futuristic series, but the story doesn't truly up the ante 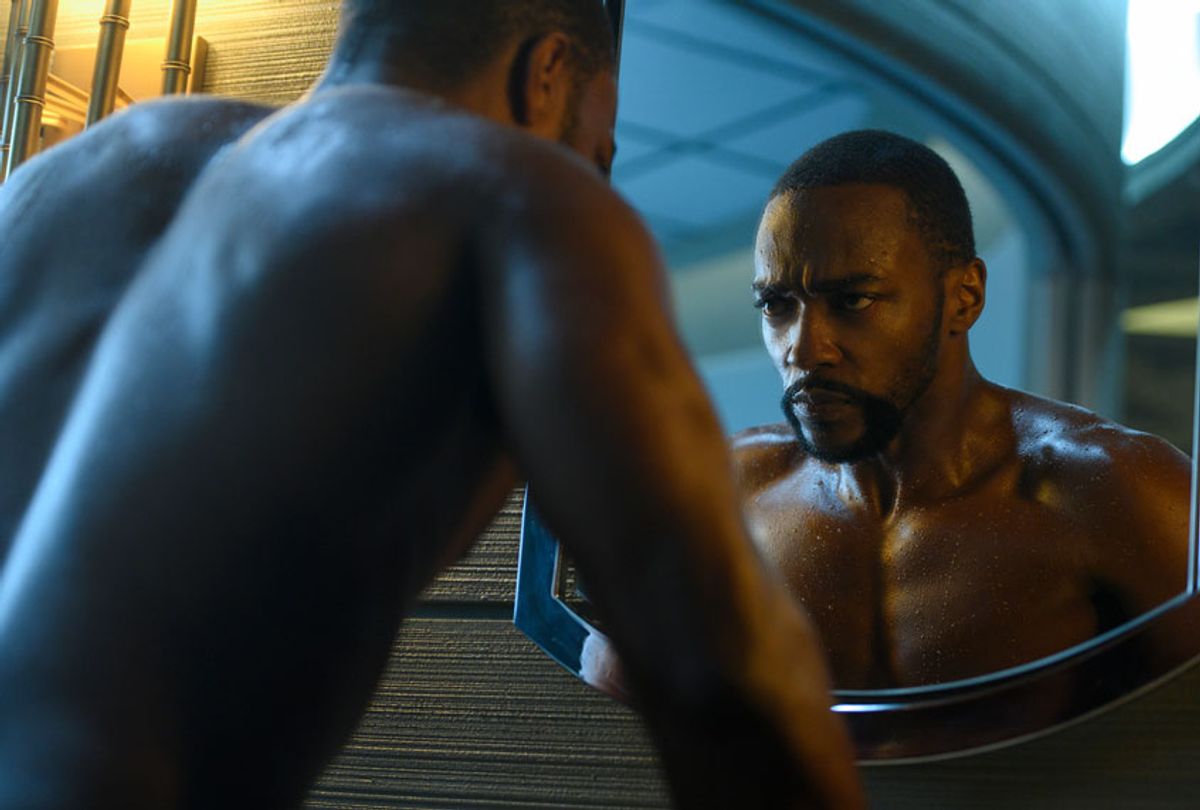 Enjoying Netflix's "Altered Carbon" requires managing expectations, and that's more true in its second season than it was in its first. Mind you, the first season was a lot of fun, introducing the lovelorn future man of action Takeshi Kovacs. As the central figure in the series where human identity is tied to a downloadable consciousness and no longer bound to a physical form, Kovacs' face quite literally changes with the seasons.

Season 1 placed him in the body of a hard-boiled detective played by "The Killing" star Joel Kinnaman. In these new episodes, Anthony Mackie (better known as The Falcon from the Marvel Cinematic Universe) takes up the fearsome mantle of "The Last Envoy," presumed sole survivor of a warrior faction founded and trained by a rebel known as Quellcrist Falconer ( Renee Elise Goldsberry). If Kovacs is a legend, Falconer's myth looms larger as hero to some, terrorist to others. And she is Eurydice to Kovacs' Orpheus, the woman he loves enough to chase across time and planets.

That's where the first season leaves us, anyway.

The second brings Kovacs from Bay City to Harlan's World, the original home of the Envoys and a place Kovacs hoped never to see again, at the hard request (otherwise known as force, thanks to Simone Missick's enterprising bounty hunter Trepp) of another member of the hyper-rich wealth class known as Meths (so named for the ancient, long-lived biblical figure Methuselah) who claims he knows how Kovacs can find Quellcrist.

The job goes wrong almost immediately and once again Kovacs is a wanted man, returning the story to a slightly changed version of the same kind of pressured case in which the hero was embroiled before. And this requires a ridiculous amount of punching, kicking, and backflips off of walls, interspersed with lots of brooding and snappy rejoinders.

People unfamiliar with Richard K. Morgan's novels may have come into the first season of "Altered Carbon" expecting a type of cyberpunk science fiction on par with "The Matrix" or some other modern meeting place of existential philosophy and tech.

Imagine their surprise, perhaps even disappointment, to find series creator Laeta Kalogridis had transformed the story into something far more basic and TV friendly, an action-driven neo-noir futuristic pulp tale. The fact that the TV "Altered Carbon" differs from the books is probably a good thing after all; Morgan's ugly TERF stance should give trans rights supporters pause, so some separation between his original creation and the series . . . might be helpful?

If not nothing else, one should note the irony in such terrible statements coming from the same person who conceived of the notion of tying individual identities to a devices called "stacks" and not to any assigned gender. A human's flesh and bone is now simply known as a "sleeve," casing that isn't merely impermanent but interchangeable if you can afford to keep buying new ones. Without spoiling anything the premiere pulls a move that could be interpreted as a clapback at Morgan on the part of Kalogridis and new showrunner Alison Schapker (although Kalogridis wrote the very messy season premiere).

Schapker has the unenviable task of taking a set of characters familiar to audiences and reintroducing them without making the story feel too much like a retread of paths already traveled. The problem is that some redux is unavoidable. Missick's addition to the cast changes up the chemistry in good ways, mostly owing to the actor's winning persona and its great fit with Mackie's Kovacs.

She's also slotted into the part played by Martha Higareda in the first season, that of Bay City detective Kristin Ortega, the woman who partners up with Kinnaman's Kovacs owing to a previous relationship with the original sleeve's occupant.

"Altered Carbon" constantly reexamines the ramifications removing mortality from the equation has on the meaning of humanity.

Turns in these new episodes hint at the possibility of this season having as a parable of human history and myth – how the former is easily perverted by the winners who shape it to suit their own ends and plans; how the latter prevents the living figures at the center from ever truly finding truth and peace, and how the conqueror's perspective fails to account for long gone crimes spinning up to seek retribution.

Lena Loren's power-hungry governor Danica Harlan embodies that perspective, and her vampy performance will either win a person immediately or cause reflexive cringing each time she comes onscreen.  Since she's an obvious antagonist, the second reaction takes nothing away from one's enjoyment; besides, the main villain drawing our attention is a special ops commander, Colonel Ivan Carrera (Torben Liebrecht) who has business with Kovacs.

The choice in these eight new episodes to focus on Goldsberry's hero is the reason people who watched Season 1 were excited to return to the show in the first place since Quell, previously seen only in flashbacks, became one of the show's most fascinating characters. Not only is she seemingly unconquerable, but the character receives some of the best combat choreography of the series. Fans will be happy to see a whole lot more of her and her capabilities in the second season.

Kovacs' charming AI sidekick Poe (Chris Conner) also stole the show last time and displays a similar power to run off with each scene in this new season, although elements of his subplot do feel unnecessarily emotionally manipulative, displaying the writers' awareness of this fan favorite's appeal. The addition of a second AI named Dig 301 (Dina Shihabi) accentuates this feeling even though Shihabi and Conner make a fetching match-up of sorts.

Audience service isn't always a negative, though. The positive reception of Will Yun Lee, the original body occupied by the Japanese-Hungarian Kovacs, win the actor more screen time and an expanded role here, although what the writers ultimately do with him and his role may leave people pondering the worth of it.

"Altered Carbon" also tones down the sexual exploitation for Season 2, although there is a violation of sorts that occurs and gets the point across without making the character's pain a lurid focal point. . Concurrently, though, the story itself its somewhat downgraded from a provocative examination of the role mortality plays in defining our humanity to a soap opera with a whole lot of gratuitous punching, kicking, and bleeding – much of it occurring in the premiere.

Gut it out through that muddled wreck, and you'll find the subsequent episodes to be an improvement, if not equal in quality to the first season. Should this round fail you, there's probably some relief in knowing the series can simply slip into a new sleeve for the next and hopefully fresher new story unless Netflix decides to remind us that as it stands, no series is immortal.

"Altered Carbon" Season 2 is now available to stream on Netflix.