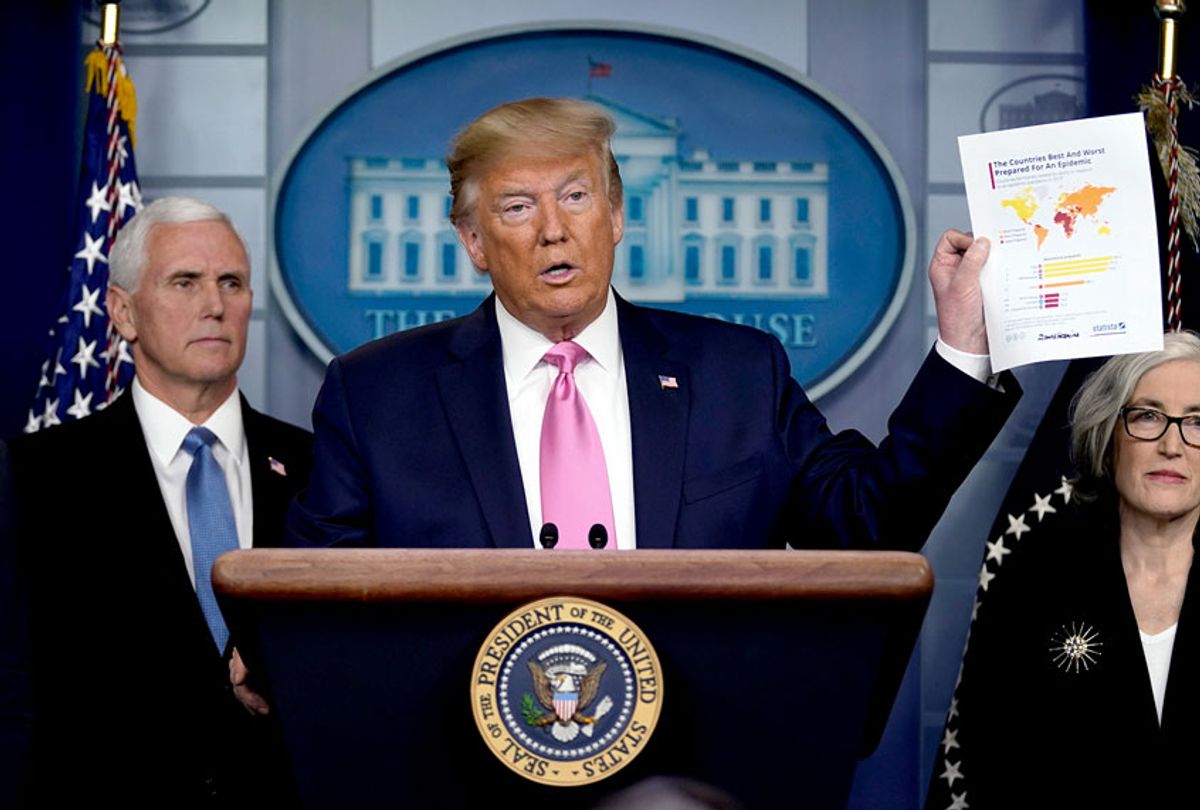 President Donald Trump, with members of the President's Coronavirus Task Force, holds a paper about countries best and least prepared to deal with a pandemic, during a news conference in the Brady Press Briefing Room of the White House, Wednesday, Feb. 26, 2020, in Washington. (AP Photo/Evan Vucci)
--

The last time a deadly virus spread quickly across continents, Republicans in Congress ramped up xenophobic rhetoric to fear-monger ahead of the 2014 midterm elections. Echoing Donald Trump, who at the time hosted a weekly "Fox & Friends," Republicans called for a travel ban and spread misinformation. "[President] Obama should apologize to the American people & resign!" Trump tweeted in October of 2014. Public polls right before the midterm elections showed that nearly 80% of Republicans thought the U.S. government should quarantine people who had recently been in a West African country with a major Ebola outbreak and nearly 50% worried they would be exposed to the Ebola virus. It was a catastrophic election for Democrats, with Republicans winning nine Senate seats and 13 House seats.

Six years later, President Trump continues to overhype the threat of the Ebola virus — this time in an effort to obscure his bungled response to a global health pandemic under his watch. Republicans in Congress are again spreading misinformation — this time in an overt attempt to defend Trump from criticism over his incompetent response.

As both Trump and his White House economic adviser Larry Kudlow appeared before cameras on Tuesday to claim that the coronavirus — and COVID-19, the disease it causes — are "well under control" and "contained," the Dow Jones Industrial tumbled 1,000 points. On Wednesday, it fell almost another 900 points. Trump insisted on Twitter, "Stock Market starting to look very good to me!"

On Wednesday, the Centers for Disease Control confirmed the first case of COVID-19 in the U.S. for which the origin is unknown — and Trump praised his administration's handling of the outbreak. "That's what saved us," he said of travel restrictions from China at a White House press conference. He made no mention of the latest confirmed case in the U.S.

Controlling an infectious disease outbreak means acting quickly and decisively at home and abroad. The Obama administration set up a permanent epidemic monitoring and command group inside the White House National Security Council (NSC) and another in the Department of Homeland Security (DHS). In 2018, Trump's former national security adviser, John Bolton, fired the government's entire pandemic response chain of command. His 2021 budget cut one out of every six dollars in the CDC budget and trimmed funding for the National Institute of Health (NIH) by 7 percent. Trump's White House finally requested an emergency spending package from Congress for $1.8 billion to combat coronavirus, according to a letter sent Monday by the Office of Management and Budget. By comparison, the Obama administration requested $6 billion in emergency funding during the 2014 Ebola crisis.

To defend the difference between his reactions to the Ebola outbreak and the spread of coronavirus, Trump effectively downplayed the seriousness of coronavirus just as a top CDC official warned people in the U.S. that "disruption to everyday life might be severe" in an effort to stop its spread. The CDC recently issued its first federal quarantine order in more than 50 years for U.S. citizens returning from anywhere in China. Still, Trump booster Rush Limbaugh claimed on his radio show that "there's nothing unusual about the coronavirus" and that it was "being weaponized as yet another element to bring down Donald Trump." Fox News host Laura Ingraham suggested Democrats were only concerned about coronavirus because they are disappointed Trump wasn't convicted in his impeachment trial.

The right-wing Washington Times published an article suggesting that the virus "originated in a laboratory in the city of Wuhan linked to China's covert biological weapons program," a claim echoed by Sen. Tom Cotton, an Arkansas Republican, on Fox News. Some of Trump's strongest backers have encouraged the president to consider quarantining American citizens in overseas U.S. territories after Republicans pushed back agains plans to relocate returning residents in red states. Using coronavirus to extend U.S. colonialism to cover up for his administration's incompetence is too on-the-nose, even for Donald Trump.

"The president just told me in our third phone call yesterday, somebody's going to get fired over this. But I don't know who," said Rep. Mike Rogers, R-Ala., of an aborted plan to house some coronavirus patients in Alabama. Patients have instead been sent to California, Texas and Nebraska.

As Trump's allies spread unfounded conspiracy theories to distract the media and public from his failings, the president tried to play clean-up by announcing on Wednesday that Vice President Mike Pence will be in charge of an all-male coronavirus task force. Trump said he was picking Pence "because he's very good at doing what he does," adding, "Look at the Indiana model, they have been very successful there." As governor of Indiana, of course, Pence infamously enabled an HIV outbreak because he was morally opposed to safe needle exchange. Now, after giving aid and comfort o anti-vaccine forces during his run for the White House, Trump is now hitching his horse to a rapid mass-vaccination program.

Trump's response to the coronavirus threat is not likely to make anyone feel secure. It serves as a reminder that not only have Republicans consistently proposed cuts in funding for health organizations meant to protect us, they stand ready to consistently prioritize politics — even in the face of grave danger.