Hey, Trump supporters: He'd rather endanger your health than lose an election 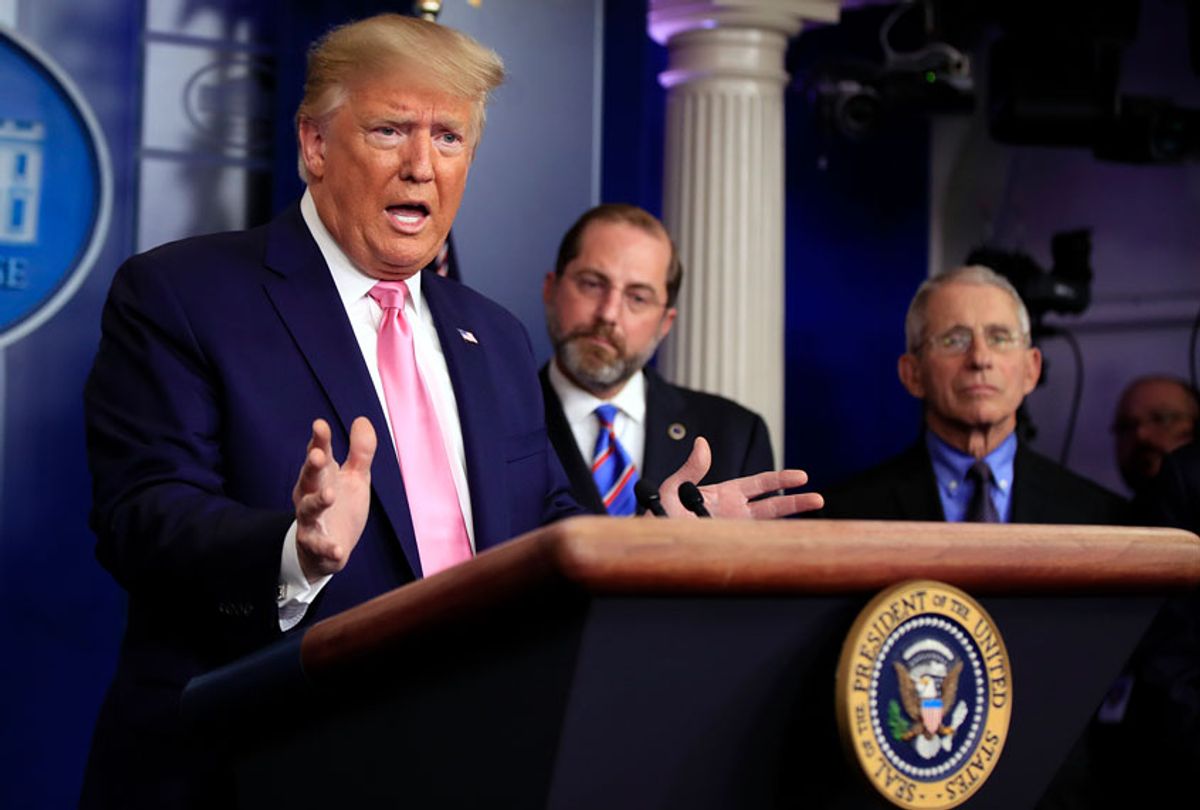 Donald Trump lies, all the time, about everything. Right-wing media and congressional Republicans back him up on these lies. As many a liberal who has confronted Trump supporters over the relentless lying has found, a lot of his voters simply don't care if he lies. They view his lying as fair game, because it's all in service of sticking it to the hated liberals. If Trump lies, cheats and steals — as his base sees it — he's doing it for them, so they can claim big wins in the culture war. Therefore it's all justified.

But this may be Trump's biggest deception of them all, because, in truth, he doesn't actually care for his own voters one single whit. The only person Donald Trump cares about is Donald Trump. While his supporters bray in glee over the way Trump's lies drive "the libs" nuts, they're falling for his biggest con of all — because he wouldn't hesitate to screw over every single one of his supporters, if he thought it would help him.

Trump's ease with betraying even his most loyal followers has been evident in his response to the threat of coronavirus, the apparent viral epidemic that began started in China and has now spread to at least 47 countries, including the United States. For most leaders who don't have a crippling case of sociopathic narcissism, the threat of this disease turning into a global pandemic would cause concern for the well-being of the nation, and of humanity at large. The response of any normal president, of whichever party, would be guided by the principle that the most important thing is the health and safety of Americans.

For Trump, however, the main priority — in fact, the only significant one — is to make sure this viral outbreak doesn't harm his chances of getting re-elected in November. If that means lying to his loyal supporters, even in a way that puts their own lives in danger, he won't hesitate to do that.

That much was made obvious in Wednesday's White House press conference on the epidemic. Even as Trump's own health officials noted that there have been at least 60 cases in the U.S. and they expect many more, Trump dismissed the situation, suggesting that the disease has already been beaten back. "We've had tremendous success," he said, asserting that the whole thing was likely to end quickly, with "just one or two people [infected] over the next short period of time."

Instead of admitting how serious this situation looks, Trump — who only sees other people's actions through a Trump-centric lens — has suggested that his enemies have exaggerated the threat of the disease to hurt him. He tweeted on Wednesday that the media was "doing everything possible to make the Caronavirus [sic] look as bad as possible" for the purpose of "panicking markets" to hurt his re-election.

(In fact, most of these media figureheads Trump hates so much stand to lose lots of money if the stock market tanks. But Trump is incapable of understanding that people have motivations that have nothing to do with him.)

It's not especially surprising that Trump, who projects his own ugly impulses onto others, would believe that people are exaggerating or inventing the coronavirus threat for political gain. After all, that's what he would do.

He has done that, in fact, as my colleague Sophia Tesfaye noted in a Thursday-morning piece in which she reminds readers that Trump and the Republicans deliberately hyped up the threat of Ebola virus to spread racist fears about Africans and damage Democrats in the 2014 midterm elections.

Similarly, one of Trump's favorite things to do at his rallies is to claim, with absolutely no evidence, that "windmills," as he calls wind turbines, cause cancer. He just made this up out of whole cloth, and the purpose is obvious: Trump despises the push for clean energy, and believes he can use it as a culture-war campaign issue about nanny-state liberalism. He will say literally anything, no matter how false or inflammatory, in order to demonize any energy source that doesn't involve burning fossil fuels.

But this isn't just about Trump's sociopathic solipsism. Right-wing media in general is all too happy to threaten the health and well-being of its audience by telling them that the media is overhyping the threat in order to undermine Trump. Rush Limbaugh, who now has stage 4 lung cancer after years of denying that smoking was dangerous, has accused the media of lying about coronavirus, suggested that it's no worse than "the common cold," and implied that leftists are making up the threat of a pandemic, just as they made up the climate crisis. (In actual reality, both things are real.) Laura Ingraham has advanced a nutbar conspiracy theory that China is somehow lying about the virus to hurt Trump.

To make it worse, the Trump-supported media has decided to attack one of the remaining competent people in charge, Dr. Nancy Messonnier, the director of the National Center for Immunization and Respiratory Diseases at the Centers for Disease Control and Prevention. They're furious that Messonnier has spoken to media outlets, commenting on the threat of the virus and asking health care workers to prepare themselves.

To punish and discredit her for the sin of putting the public health over Trump's political interests, Limbaugh, aided by right-wing bloggers, has been spreading a conspiracy theory accusing Messonnier of being part of a "deep state" conspiracy against Trump. Their evidence? She is the sister of former Deputy Attorney General Rod Rosenstein, a Trump appointee now hated by Trumpers because he got fed up with lying for the president and started telling the truth. These lurid and false conspiracy theories should be contrasted with the mildness of Messonnier's actual comments, which have focused on the CDC's plans to slow the spread of the disease.

What's interesting about Trump and his minions ruthlessly and relentlessly lying is that the audience for these lies is mostly Trump's supporters, not the general public. Most Americans, who don't support Trump, know perfectly well that he's a liar and don't believe a word he says. The people who are being told to take risks with their health and ignore advice from Messonnier and other public health officials are Trump voters themselves.

This is hardly the first time that Trump has risked the safety of his own supporters in service of his own ego. Last summer, he infamously used a Sharpie to fake a map in order to make it seem like Hurricane Dorian would hit Alabama, even though weather experts said it would not. He did this entirely to save face, because he had previously tweeted that Alabama was under threat and was angry about being publicly corrected.

The incident went viral, partly because the fake map was so badly done, but also because it showed that Trump won't hesitate to put his own supporters in danger, for the slightest, pettiest and most self-serving reasons. Luckily, the map was not remotely convincing, and did not lead to panicked evacuations, which sometimes cause injury and death in accidents.

Trump's lies about coronavirus, on the other hand, are a big deal. The advice from health officials on how to prevent transmission is fairly standard — wash your hands; pay attention to travel advisories — but it's now being counteracted by Trump and the right-wing media encouraging their audiences to be distrustful of all such expertise. Will some people in MAGA America, eager as always to stick it to "the libs," forgo hand-washing rather than betray their faith in their leader? It's possible. Trump simply don't care if his fans get sick or die, as long as he feels his own interests are being protected.