Loughlin and her husband, Mossimo Giannulli, claim that they were told the money they spent was being used legally 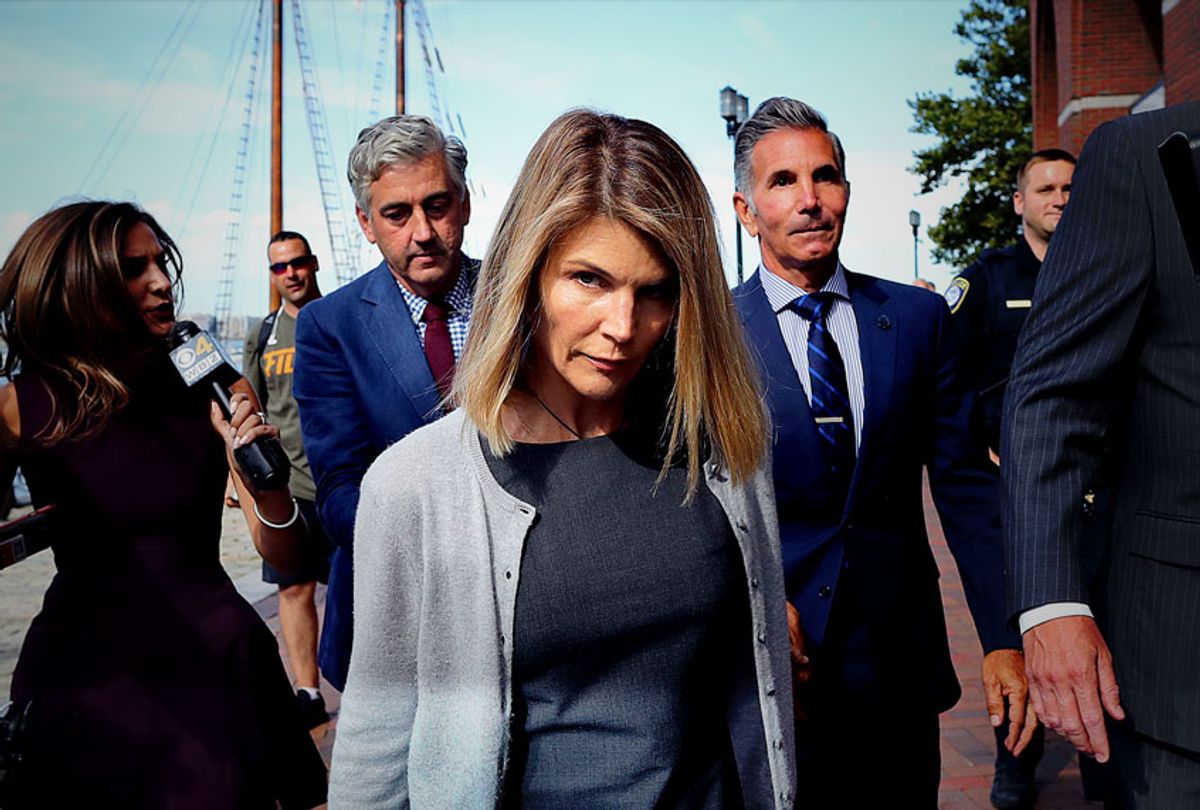 Lori Loughlin, center, and her husband Mossimo Giannulli, behind her at right, leave the John Joseph Moakley United States Courthouse in Boston on Aug. 27, 2019. A judge says actress Lori Loughlin and her fashion designer husband, Mossimo Giannulli, can continue using a law firm that recently represented the University of Southern California. The couple appeared in Boston federal court on Tuesday to settle a dispute over their choice of lawyers in a sweeping college admissions bribery case. Prosecutors had said their lawyers pose a potential conflict of interest. Loughlin and Giannulli say the firms work for USC was unrelated to the admissions case and was handled by different lawyers. (John Tlumacki/The Boston Globe via Getty Images)
--

Lawyers for actress Lori Loughlin and her husband, fashion designer Mossimo Giannulli, claimed in a court filing on Wednesday that evidence produced by the prosecutors exonerates the couple in the college admissions scandal.

The attorneys point to notes taken by William "Rick" Singer, the alleged mastermind behind the scandal, as evidence that he was pressured to lie, according to NBC News and the Associated Press. Attorney Sean M. Berkowitz wrote, "Singer's notes indicate that FBI agents yelled at him and instructed him to lie by saying that he told his clients who participated in the alleged 'side door' scheme that their payments were bribes, rather than legitimate donations that went to the schools."

Singer's notes read, "Loud and abrasive call with agents. They continue to ask me to tell a fib and not restate what I told my clients as to where there [sic] money was going — to the program not the coach and that it was a donation and they want it to be a payment."

Singer has pleaded guilty to a scam in which wealthy parents would pay to improve their children's test scores or fabricate records for their children as student-athletes. Loughlin and Giannulli are accused of paying $500,000 to Singer for allegedly faking athletic credentials for their two daughters so they could be admitted to the University of Southern California. Their attorneys argue that the prosecutors have withheld this exculpatory evidence.

Loughlin and Giannulli's legal team has also filed a motion to postpone setting a trial date, questioning whether the prosecutors have respected the couple's legal rights.

"The government is trying to benefit from withholding information in violation of its obligations and the defendants constitutional rights, but then force trial as quickly as it can," the defense attorneys said in the filing on Wednesday. "The government should not be rewarded, nor the defendants punished, for this kind of egregious lack of candor and violation of its obligations."

This is not the first time that one side in the Loughlin-Giannulli trial has claimed that the other has withheld information. In a court filing last month, federal prosecutors accused Loughlin, Giannulli and a majority of the other parents in the case of not submitting their discovery materials. The government claimed that it "disagrees with the defendants' assertion that it is premature to provide their own discovery. The government contends that it has complied with its discovery obligations and continues to comply with them." Attorneys for Loughlin and Giannulli responded at the time, "the Government appears to be concealing exculpatory evidence that helps show that both Defendants believed all of the payments they made would go to USC itself — for legitimate, university-approved purposes — or to other legitimate charitable causes."

In a 2018 interview with Salon, Loughlin discussed wanting to send her daughters to college, explaining that she wanted her daughter to have a secure future and that "I think I've shown her and presented all the pitfalls that there might be. I would be a hypocrite at this point to say no, you can't do it, because I'm doing it. She sees me and I'm making a living. And then there's a part of me that goes yes, it's a hard business, but why not her?