Coronavirus chief Mike Pence brags about response to HIV outbreak, but experts say he made it worse 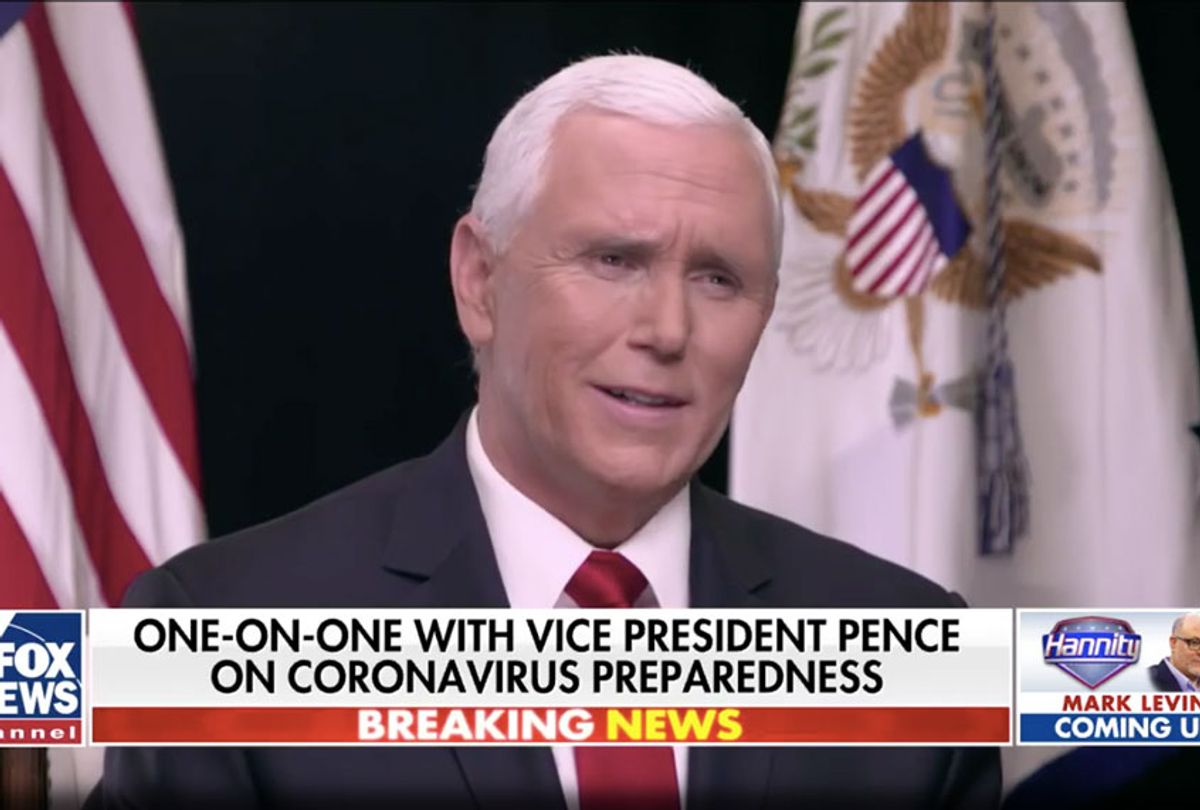 Vice President Mike Pence defended his widely criticized handling of a 2015 HIV outbreak in Indiana after President Donald Trump tapped him to oversee the administration's response to the coronavirus.

Trump tapped Pence to lead the response to the coronavirus, which has spread to dozens of countries and has killed more than 2,800 people, after telling aides that his vice president didn't "have anything else to do," according to The New York Times. Pence, who has no medical background, cited his handling of the worst HIV outbreak in the state's history while he was governor of Indiana to tout his qualifications for his new gig, even though medical experts say his policies made the crisis worse.

"We worked the problem early in the year from a law enforcement standpoint, from a health standpoint," Pence told Fox News' Sean Hannity while taking a break from his new duties to attend the CPAC convention before flying to a $25,000-a-head Florida fundraiser. "I don't believe in needle exchanges as a way to combat drug abuse, but in this case we came to the conclusion that we had a public health emergency. And so I took executive action to make a limited needle exchange available."

In reality, Pence's push to cut Planned Parenthood funding as a member of Congress and subsequent health spending cuts during his time as governor left Indiana's Scott County and its 24,000 residents without an HIV testing clinic. HIV cases related to injection drug use spiked in the area after the closure, and Pence resisted declaring a public health emergency for months as he turned to prayer. Pence also resisted federal and intrastate pressure to allow needle exchanges until four months after the outbreak, which resulted in more than 200 HIV cases, began.

"It was disappointing that it took so much effort to bring the governor on board," Republican state Rep. Ed Clere told The New York Times after Pence finally relented.

A 2018 Yale University study concluded that the crisis could have been prevented if Pence and his team had acted sooner.

Greg Millett, the director of public policy at the Foundation for AIDS Research who previously worked as an epidemiologist for the Centers for Disease Control and Prevention, told The Associated Press that the outbreak was "entirely preventable" had Pence acted sooner.

"This would have been entirely preventable if Indiana had acted fast with a syringe exchange," he said. "To have some 200 people become infected over such a short time period was unprecedented."

Steven Thrasher, a Northwestern University journalism professor who tracked the HIV outbreak, said Pence delayed action by telling lawmakers that "he was going to pray on it."

"His background shows that he brings religion, a lack of science and a budgetary mindset to public health matters," he said. "In a time of emergency, those are not the safest ways to be approaching what could become an epidemic."

"Vice President Pence's leadership failure during the Indiana HIV outbreak is reason enough to question his ability to lead the federal government's response to coronavirus at this time," she said in a letter to the president. "At a time when science and public health considerations should be driving all decision-making and the public is looking to the federal government for clear, fact-based communications, it is clear that Vice President Pence is neither a responsible nor a reliable selection to lead the coronavirus response."

Speaker of the House Nancy Pelosi, D-Calif., told reporters that she directly told Pence that "the concern that I had of his being in this position."

Pence took on the job after Trump reportedly grew "furious" that CDC officials issued stark public health warnings about the spread of the virus, which Trump believed "spooked" the stock market. The warnings were strongly at odds with Trump and his advisers' attempts to downplay the risk of the virus, which some experts say could infect 40% to 70% of the world's adult population.

Administration officials told The Washington Post that Pence "moved to seize control of all federal communications on the virus" and required that all Cabinet officials and health experts get clearance from his office before making any public remarks.

"The Vice President is starting off by not allowing the head of the NIH to speak freely. I will try to be as precise and non shrill as possible with my language here: It is essential in times like these that experts are allowed to tell us what's really going on in their own words," Sen. Brian Schatz, D-Hawaii, tweeted.

"America wants a nonpolitical person, particularly in this hyper-political environment, to manage this response — and Vice President Pence is the opposite of that," Leslie Dach, who worked on the Department of Health and Human Services' response to the Ebola virus in 2014, told The Post.

You can watch the full interview below via Fox News: