Study: Right-wing coup in Bolivia was based on false claims of election fraud

U.S. media and politicians largely backed the overthrow of leftist president Evo Morales — but the excuse was BS 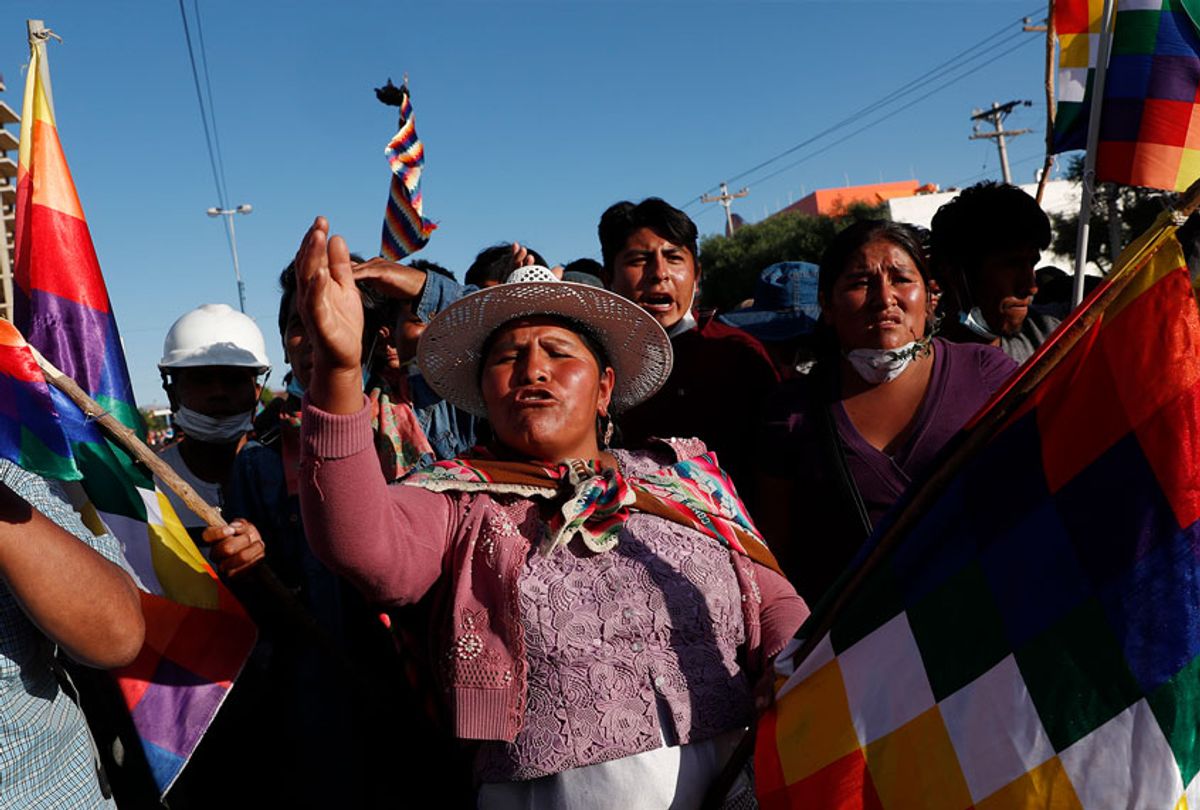 Supporters of former President Evo Morales rally in Sacaba, outskirts of Cochabamba, Bolivia, Monday, Nov. 18, 2019. Morales's backers have taken to the streets demanding his return, since he resigned on Nov. 10 under pressure from the military after weeks of protests against him over a disputed election he claim to have won. (AP Photo/Juan Karita)
--

A new study released by a pair of MIT researchers Thursday reveals that, contrary to claims from the U.S.-backed Organization of American States, there was no fraud in Bolivia's Oct. 20, 2019 elections — an accusation used by the OAS and others as a pretext for supporting the coup in the country that deposed President Evo Morales and replaced him with an unelected right-wing government.

"Good lord," tweeted MSNBC journalist Chris Hayes. "Given the fact the entire Morales government was toppled over accusations of election fraud, the OAS has a lot to answer for."

The Intercept's Jon Schwarz took a similar approach to the findings and the OAS' conclusions.

MIT researchers John Curiel and Jack R. Williams reviewed the OAS report on the election for the Washington Post and found that the "election irregularities" cited by the group were based on "problematic" statistical claims. The OAS report rested its claim on the assumption that these so-called irregularities gave Morales a boost in numbers that raised his results over 10% higher than any other candidate, precluding a runoff election.

The researchers say they requested a response from the OAS about their findings, but received no reply.

Curiel and Williams' study was commissioned by the Center for Economic and Policy Research (CEPR). The group's co-director, Mark Weisbrot, said in a statement that the OAS has a lot of explaining to do after facilitating the coup through faulty information.

"The OAS greatly misled the media and the public about what happened in Bolivia's elections, and helped to foster a great deal of mistrust in the electoral process and the results," said Weisbrot.

The orgnaization's report bolstered the accusations of fraud in the Nov. 10 OAS report that precipitated the coup and the institution of hard-right legislator Jeanine Añez as president. The ensuing unrest and threats against he and his family, as Common Dreams reported at the time, forced Morales to flee the country for Mexico.

According to Curiel and Williams, the data used by OAS doesn't line up with the organization's conclusion:

Our results were straightforward. There does not seem to be a statistically significant difference in the margin before and after the halt of the preliminary vote. Instead, it is highly likely that Morales surpassed the 10-percentage-point margin in the first round. ...

There is not any statistical evidence of fraud that we can find — the trends in the preliminary count, the lack of any big jump in support for Morales after the halt, and the size of Morales' margin all appear legitimate. All in all, the OAS' statistical analysis and conclusions would appear deeply flawed.

"This important analysis from MIT election researchers is the latest to show that the OAS' statements were without basis, and that simple arithmetic shows that there is no evidence that fraud or irregularities affected the preliminary results, or the official results ― the ones that actually matter," Weisbrot said. "The OAS needs to explain why it made these statements and why anyone should trust it when it comes to elections."

"So much for that Bolivian election fraud," tweeted the Intercept's Ryan Grim.

The OAS is set to monitor new national elections in Bolivia set for May 3. Morales, still in exile, has effectively been barred from running.

Williams told Common Dreams that his and Curiel's findings cast doubt on the organization's impartiality and ability to act as a neutral arbiter.

"The OAS's report has basic methodological and statistical errors that make it difficult to see the OAS as an impartial election observer," said Williams. "The fact that they did not respond to researchers asking about their report on Bolivia seems to suggest they know this."

National Nurses United director of communications Charles Idelson said on Twitter that the findings throw cold water on an attack line deployed by right-wing opponents of Sen. Bernie Sanders' 2020 campaign for the Democratic presidential nomination, who have used his statement at Tuesday's debate that the U.S. meddles in other countries against him.

"The fraudulent right wing military coup in Bolivia was carried out with Trump administration support," said Idelson, "but some apparently still pretend the U.S. never overthrows governments of other countries."

Curiel and Williams also point to the role in the media for uncritically regurgitating OAS claims on face value as the coup against Morales' Movimiento al Socialismo (MAS-IPSP) party was underway.

"The media has largely reported the allegations of fraud as fact," the researchers write. "And many commentators have justified the coup as a response to electoral fraud by MAS-IPSP."

Utah-based progressive activist Tom Taylor called for accountability on the part of the media.

"Our news outlets took what known liars like John Bolton said about Morales at face value," said Taylor. "Zero critical thinking. The journalists were old enough to remember when we were lied into the Iraq War."

"There's no other way to put it," Taylor added. "Our media supported a coup."