5 ways William Barr is turning America into a dictatorship 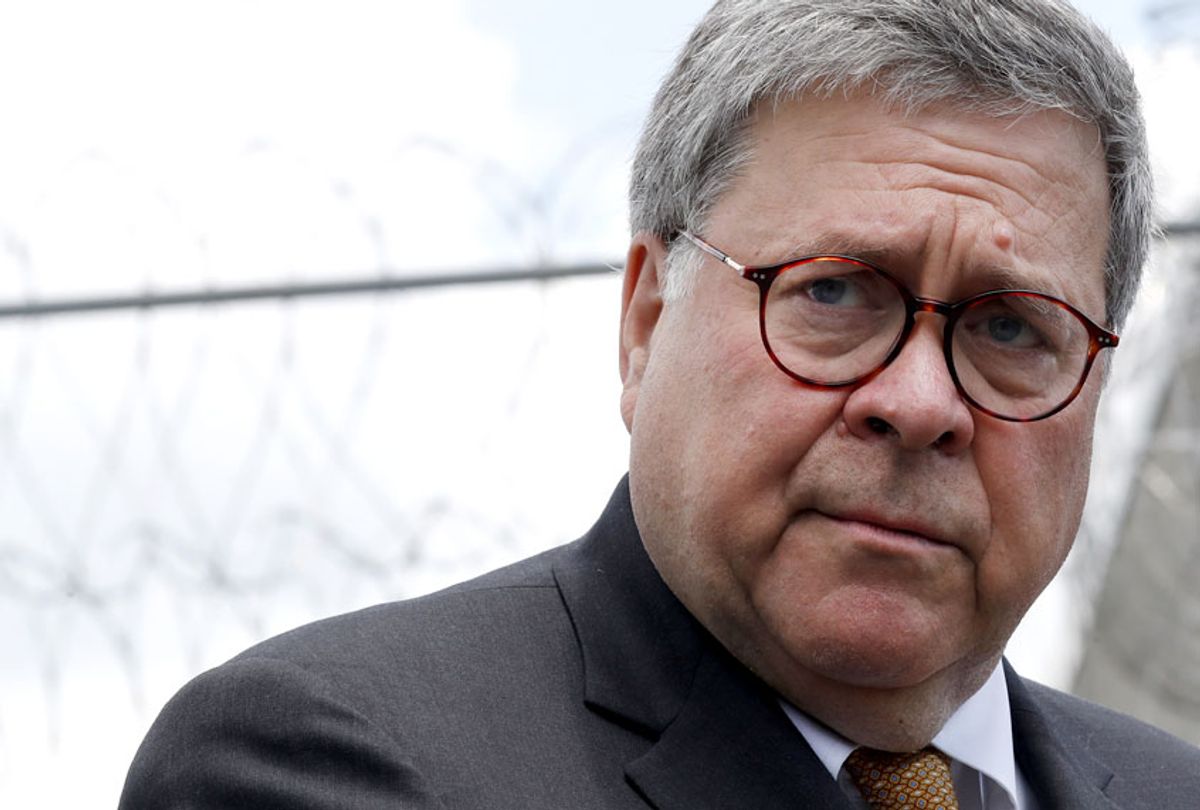 William Barr was installed as Attorney General specifically to turn the Department of Justice into an arm of the Trump Coverup. And we've seen him do exactly that. Barr has corrupted and politicized the Department of Justice, working hand in hand with Donald Trump to bend federal law enforcement to the president's will. Here are some of the ways Barr is helping Trump turn our democracy into a dictatorship:

1. He intervened in the sentencing of Roger Stone,Trump's longtime confidant and advisor, who faced a prison sentence for obstructing Congress and witness tampering in connection with the Russia investigation. The day prosecutors announced they were seeking seven to nine years for Stone's sentencing, Trump called the sentence "a horrible aberration," and said that the prosecutors "ought to be ashamed of themselves" and were "an insult to our country."  A mere 24 hours later, after Trump's public tantrum, the Department of Justice announced it would change its sentencing recommendation for Stone [CUT TO NEWS CLIP]. Showing more backbone than Barr, four career prosecutors then withdrew from the case, and one resigned.

The incident caused such an uproar that Barr was forced to declare that he wouldn't be "bullied" and that Trump's tweets "make it impossible to do my job." But anyone who has watched Barr repeatedly roll over for Trump saw this as a minimal face-saving gesture. For example:

2. Barr has green-lit an "intake process" for any information that Trump stooge Rudy Giuliani may dig up about Ukraine and the elections. That's right. Barr has given Trump's personal lawyer, who is under a Justice Department investigation that has led to charges against two of his associates, a direct line to the Justice Department to funnel dirt about Trump's political rivals.

3. Barr misled the public about the contents of the Mueller report. Before the report was released, Barr sent a memo to Congress "summarizing" its findings. In his memo, Barr claimed there was insufficient evidence for an obstruction of justice case and supported Trump's claims of "total exoneration". Robert Mueller was so infuriated by Barr's misrepresentation of his findings that he wrote a letter complaining that Barr's summary "did not fully capture the context, nature, and substance" of Mueller's investigation. Barr nonetheless held a press conference reiterating his own claims, bolstering Trump's narrative of "total exoneration," and shifting the media coverage of the report.

4. Barr refused to accept the findings of the Inspector General report investigating the origins of the Russia probe. In December, Inspector General Michael Horowitz released his report, finding that while the Russia probe was flawed in some aspects, there was no evidence of political bias and it was justified. This, of course, contradicts Trump's narrative that the Russia probe was launched by deep-state partisan hacks determined to take him down. The day the report was released, Barr called the Russia investigation a "travesty" and claimed that there were "gross abuses …and inexplicable behavior that is intolerable in the FBI" and that he thought "there was bad faith" in the investigation. It's unprecedented for the Attorney General to so vehemently disagree with the findings of an impartial Inspector General.

5. Barr buried the whistleblower complaint that kick-started the impeachment inquiry and tried to keep it from reaching Congress. His Justice Department investigated the contents of the complaint within a narrow scope and wrapped up its investigation within a mere three weeks, finding no evidence of wrongdoing. Yet again, Barr was running interference to shield Trump from accountability.

Trump says he has the "legal right" to meddle in cases handled by the Justice Department.

That's wrong. If a president can punish enemies and reward friends through the administration of justice, there can be no justice. Justice requires impartial and equal treatment under the law. Partiality or inequality in deciding whom to prosecute and how to punish is tyranny. Plain and simple.

A half-century ago I witnessed the near dissolution of justice under President Nixon. I served in the Justice Department when a bipartisan Congress resolved that what had occurred would never happen again. But what occurred under Nixon is happening again. Like Nixon, Trump has usurped the independence of the Department of Justice for his own ends.

But unlike Nixon, Trump won't resign. He has too many enablers — not just a shameful Attorney General but also shameless congressional Republicans — who place a lower priority on justice than on satisfying the most vindictive and paranoid occupant of the White House in modern American history.

One ABC News interview, conducted only to give the appearance of impartiality, doesn't make up for the myriad ways Attorney General Bill Barr has corrupted the Justice Department and willfully abetted Trump's lawlessness. For the sake of our democracy, he must resign immediately.