"Extreme Makeover: Home Edition" is back, just in the nick of (the worst of) times 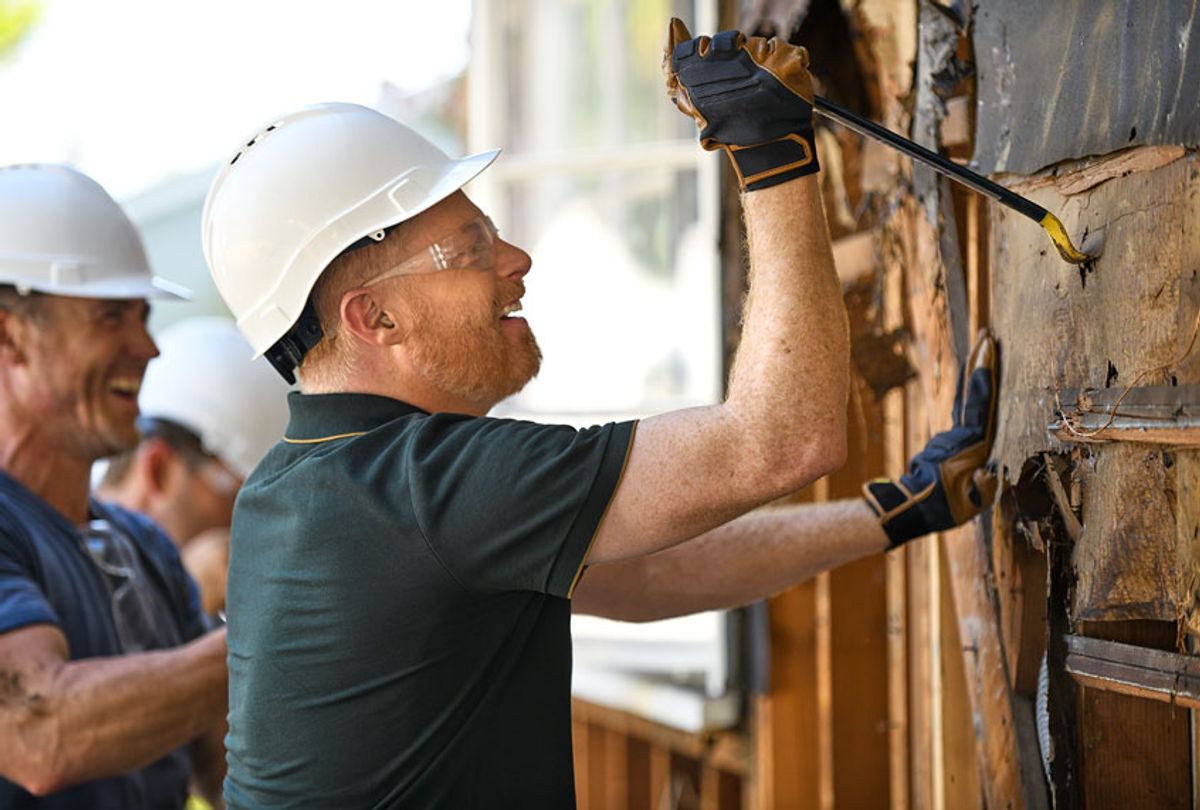 The American story hangs on the image of a nation that, when faced by disaster, rolls up its sleeves, rises up, and faces whatever challenges and obstacles destiny serves head-on and together.

But the truth is we'd rather retreat inside our homes. Directly in the wake of 9/11 stories of cocooning abounded, painting America as a country obsessed with home and hearth. Profits for home furnishing chains such as Bed Bath & Beyond rose in the wake of the disaster, and people began equating HGTV with comfort viewing.

This was not some temporary fancy, either. HGTV's ratings ascendance in the early Aughts is a direct result of this visceral desire to feather our nests, paired with a subprime mortgage lending spree that would cause to the 2007 financial crisis.

"Extreme Makeover: Home Edition" debuted on ABC between those formative cataclysms, airing its first episode at the end of 2003 and riding a 10-season wave of popularity that crested in its second, slowly sailing to its ratings nadir in 2013, when it aired its last episode on broadcast television.

At its zenith, during the 2004-2005 TV season, the show was watched by an average of 15.75 million viewers each week, making it the 15th most popular series on television. It also served as family-friendly counterprogramming to disheartening evening news reports about the swelling insurgency in Iraq, an escape hatch from the world's anxieties.

Returning "Extreme Makeover: Home Edition" to television in 2020, this time on HGTV, makes sense for a laundry list of reasons.

None matter as much as the series' promise of honest, feel-good, apolitical entertainment at a time when Americans can't agree on anything; when the concept of coming together for a noble cause seems all but dead, and when the looming threat of a coronavirus pandemic changes the concept of hygge into a survival mechanism as opposed to a self-care indulgence.

This reboot, hosted by "Modern Family" star Jesse Tyler Ferguson, is decidedly less ostentatious than the original series that made former host Tyler Pennington a household name and a sex symbol. In some ways, it's more down to Earth. I'm also guessing the series' current producers are a lot savvier about seeking out certain types of health-related hard-luck stories to exploit for ratings.

In other respects it's the same show that it ever was, presenting the kind of tragic, "there but for the grace of God go I" personal story as currency to be traded in for upgraded floorplans, new furniture, and an array of electronic doodads for the kids. Lest this sound flippant, in this round of the series, the level of each family's need is not in question.

The March 1 episode features Jeff Holtzclaw, a beloved schoolteacher who works with at-risk kids, and his wife Emily. Jeff was hit by a car while riding his motorcycle and nearly died. Although he recovered, doctors had to amputate his leg.

The Holtzclaws and their three daughters are barely making ends meet. The family home is falling apart around them and they don't have the money for accessibility upgrades. The "Extreme Makeover" teams sails to the rescue on its big blue bus, stripping the place down the studs and transforming the entire home into a spacious and easily navigable retreat. Tears flow before and after the signature "MOVE! THAT! BUS!" reveal.

Next up on the show, on the March 8 episode, we receive the vicarious swelling of the heart at watching a cancer survivor's childhood home receive a facelift.

Brand promotions still abound in these transformations of rundown domiciles into airy spaces worthy of a House Beautiful spread. Where previously hindered parents can raise their children and spend quality time without feeling cramped.

For the Holtzclaws, the interior expansion was necessary for Jeff's physical well-being and the family's psychological stability. However, once the build is done and the reveal is complete and the cameras leave, we cannot know that this family or other beneficiaries of the show's largesse will enjoy a happily ever after.

And maybe that's the problem with reboots of shows like this one or the returns of its mid-2000s contemporaries "The Biggest Loser" (which returned in January on USA), "Wife Swap" (now in its second season of cable's Paramount) and "Supernanny" (also back, but now on Lifetime). Their recognizable titles guarantee some level of tune in, even though in the years since "The Biggest Loser" left NBC there have been follow-up stories showing how the program's extreme weight loss measures had a negative impact on their contestants' health in the long run.

"Wife Swap" and "Supernanny" are only as detrimental as a viewer finds unscripted conflict to be, and actually, the most recent episodes of each prove that the shows have changed with the times, and for the better. A "Wife Swap" episode featured an anti-feminist biker wife trading places with a fitness influencer who runs her own businesses while her manager husband cares for the house and their two daughters, ends on an unexpectedly uplifting note.

The woman who begins the episode declaring that women should be seen and not heard realizes that in the long run a more equal partnership with her husband may benefit both of them. The biker, a man named Tombstone, concludes that helping with household chores and cooking once in a while might strengthen his bond with his son. (The influencer, meanwhile, launches another business.)

These are intimate, fly-on-the-wall stories dangling the possibility of bridging giant divides that look impassable from a distance. "Extreme Makeover: Home Edition" answers a real need with a fantasy solution.

But this, too, speaks to the top worries of 2020, that of substandard and unaffordable housing and having a family's finances annihilated by unforeseen health-related disasters.

Stories like that of the Holtzclaw family also makes "Extreme Makeover: Home Edition" a counterweight to the rest of HGTV's schedule, a repository of real estate overkill inspired by the success of "House Hunters" – another series that was only a couple of years old when September 11, 2001 changed how we see ourselves.

The flood of real estate fantasy shows that "House Hunters" begat transformed the notion of home ownership from an entitlement of the America work ethic to an aspiration fewer people feel they will ever realize. (Case in point: One of the celebrity helpers in Sunday's episode is David Bromstad, host of the channel's "My Lottery Dream Home." )

At the height of the "Extreme Makeover: Home Edition" popularity on ABC, Americans enjoyed record rates of homeownership, to the tune of 68% of Americans owning their own homes, or 73 million families, according to the Census Bureau. Today's ownership rate is only slightly lower, with the latest Census Bureau data placing it at 65.1%.

But as we're being reminded right now, a lot can happen during a season of television – and the "Extreme Makeover: Home Edition" model of  celebrating of community, philanthropy, and its focus on rewarding good people stuck in a tough patch speaks to that American story that highlights the best in us when the world feels closed and meaner.

The ABC version of "Extreme Makeover: Home Edition" lasted through Hurricane Katrina, through the worst of the recession and a spiteful presidential election in 2012. Near the end of its run, the ABC property was contending with its own sinkholes as former beneficiaries of the program's inspirational largesse were unable to afford the soaring utility costs, stark increases in their property taxes and other issues that crop up as a result of living in a dream palace shown off to the world on television.

As it turns out, rewarding folks like one kind-hearted, down-on-his-luck chiropractor by transforming his 1,212 square foot home into 4,337-square foot mini-mansion that includes a 10-person capacity jacuzzi creates more financial problems down the road.

Most people don't contemplate such matters. Outwardly, though, the HGTV version appears to have learned from previous mistakes . . . somewhat. Recently the network's senior vice president of program and development Loren Ruch explained to TV reporters that this go-round emphasizes renovating existing properties, creating functionally improved homes on the same footprint.

He also mentioned other financial offsets, such as energy efficient appliances and design or "scholarships to help the children go to school." The HGTV version debuted on Feb. 16, recent enough that any rolling effects these participants might experience may not be immediately apparently or even hit their mailboxes yet. That means we can only take these heartwarming renovation stories inviting neighbors to give neighbors a hand up and out of a crisis at their present face value.

"You deserve this," Ferguson assures a weeping recipient overwhelmed by the community's kindness, and the "Extreme Makeover" corporate-sponsored generosity pitched in to make their homes, be they ever so humble and ramshackle, a little dreamier and easy to live in.

That assurance may not solve these families' problems in the long term. But perhaps for the time being it makes ours feel slightly more manageable.