"Dispatches From Elsewhere" casts a wondrous spell, but can it overcome our cynicism? 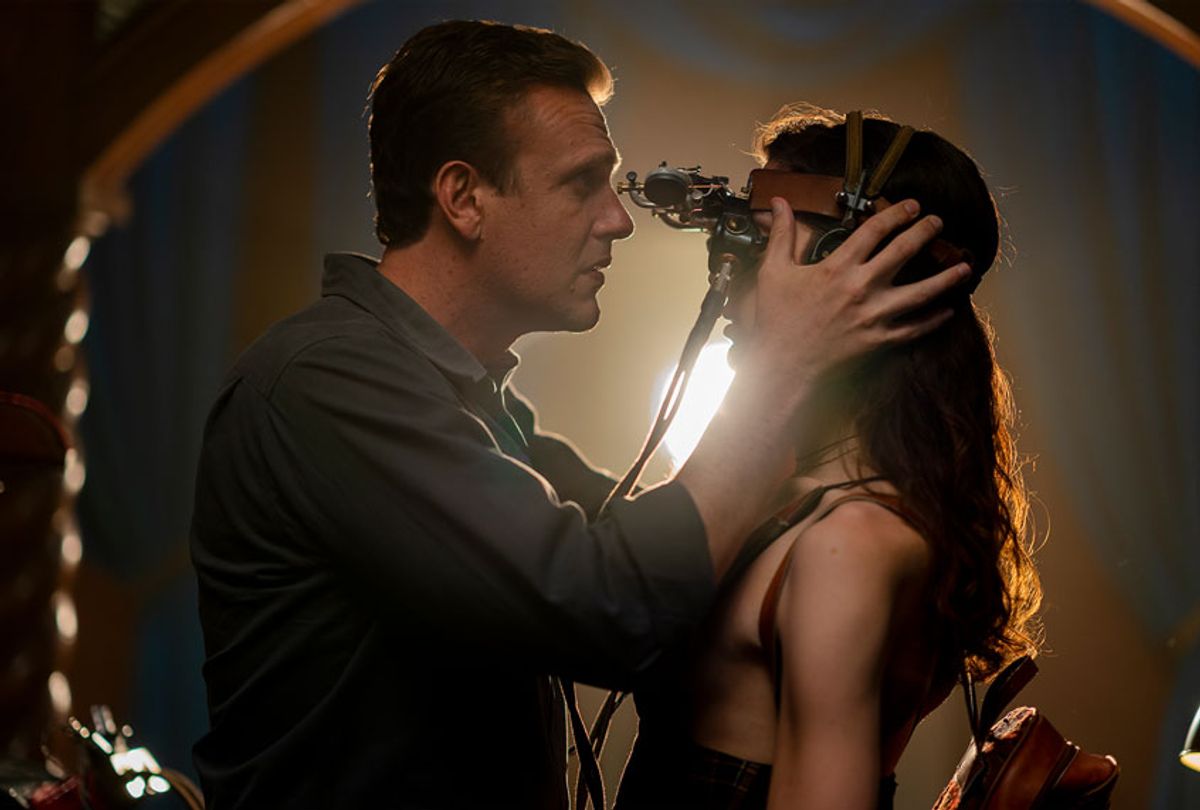 Falling in like with "Dispatches From Elsewhere" requires a hunger many people no longer countenance, either owing to an intolerance for the type of sideshow aesthetics permeating each frame or an allergy to that nebulous feeling characterized, often dismissively, as whimsical. We don't often think about the double standards when it comes to that term – only certain creators are allowed to get away with it or, indeed are celebrated for it.

One wonders whether series creator and star Jason Segel will be afforded that latitude with this story so thoroughly devoted to finding magic in the mundane, even in places otherwise overlooked for being nondescript or even homely. Frame by frame, "Dispatches From Elsewhere" steeps the audience in a sense of departing from reality despite being anchored to it.

Much of the time it accomplishes this via cinematic technique and an editing that places the viewer inside the head of its protagonists while urging us to observe everything about them. In one scene, a character walks down a side street lit and styled to resemble Paris, an assumption strengthened by the French music lilting in the background. Only an obscured American flag in the background behind her lets us know that she's still in Philadelphia, where the show is set.

Then she removes her ear buds, and garish, joyful American pop music floods the scene, confirming her location. Her body is in City of Brotherly Love, but her imagination transports her to the City of Lights – and the audiences meets her in both places.

Such details are everything in "Dispatches From Elsewhere," and there are details everywhere to take in with a laser focus or a soft gaze. Both ways work.

Nevertheless, it takes a desire for a specific mood that welcomes intentional oddity and scavenger hunts, and gently smiles at the idea of a tale visually and narratively structured to resemble a thoughtfully curated curiosity shop – a place that spells the word "shop" with an extra p and an e.

And frankly, a lot of people are over that crap.

That's completely understandable reaction in our pessimistic, cynical era, where having seen it all is a true possibility. Whimsy is OK when there's something intellectual lurking beneath it, as with "The Good Place" or "Russian Doll."

Otherwise flights of fancy are a signature move for established filmmakers such as Wes Anderson and Michel Gondry or TV producers like Bryan Fuller, who gave us "Pushing Daisies," "Wonderfalls," and "American Gods." Through their work they're earned enough cachet for people who have seen a lot of TV and film and enjoy talking all the TV and film they've seen to respect their amusing, provocative visual application of magical realism; Fuller also helped his case by recruiting bright and potent personalities such as Kristin Chenoweth and Lee Pace to breathe life into his visions.

Whereas viewers who don't know of Segel as the depressed, broken-hearted schlub from 2008 "Forgetting Sarah Marshall" or 2011's "The Muppet Movie," a product of his rampant adoration for all things Jim Henson, recognize him as Marshall Eriksen from the CBS sitcom "How I Met Your Mother." Those who believe indulging in straight-on whimsical presentations is something to be earned might not have much patience for "Dispatches From Elsewhere."

On the other hand, to quote the best character in the show: "Remember fun?"

The invitation and challenge offered by "Dispatches From Elsewhere" is implied in two titles referenced directly and indirectly throughout the four episodes made available for review. One is the ubiquitous and ever-present procedural "Law & Order: SVU." The other, Jean-Pierre Jeunet's 2001 film "Amelie," is known to far fewer people even though its themes directly influence on this series.

"Amelie" follows a woman who shapes the world around her to suit her own fancy, inferring that the world itself is magical, even the ugly parts. But most people filter their understanding of life through shows like "SVU," which is to say it's a place where terrible things happen, and champions of justice seek to tip the scales in the direction of righteousness. The "game" plays upon that central and broadly understandable interpretation of human drama, but the people propelled through the story it creates take joy in playing the part of heroic detectives on a quest that only feels as dangerous as they decide it can be, and just as often affords them moments to pause, take a breath and appreciate the view.

Had "Dispatches" come into being sometime between 2008 and 2011, around the time that Bay Area artist Jeff Hull caught up thousands of people in his so-called alternate reality game/ social experiment, it may have been able to ride some undercurrent that thrived in an era of hope and change.

Hull's game is the basis of the 2013 documentary "The Institute" which in turn serves as the inspiration for "Dispatches." But the sport itself is merely the doorway. "Dispatches" announces its all-in celebration of magical realism from the top of the first episode with Richard E. Grant's mysterious narrator staring into the camera, stock still, as if to burrow into the viewer's soul, purely in an effort to throw her off center.

"And now that I have your attention, I'll begin," Grant says calmly, he launches into his character's statement of purpose by way of declaring he's skipping the typical limited series convention "which dictates that the the filmmaker spend an unnecessary amount of time to introduce you to our protagonist, his occupation, the particularities of his life and most importantly, the obstacles that stand in the way of his happiness."

This is unnecessary, he explains, because the protagonist in the first episode is an all-too familiar figure, Segel's numb office drone Peter, a man divorced from feeling. Peter shambles through the motions of his life – existing, not living, as Grant points out – until one day he happens upon a flyer with pull tabs advertising experiments with dolphin communications system testing and human force fields.

On a lark he calls the number on one of the tabs and is soon drawn into a game – or is it a conspiracy, as the shadowy figures behind the curtain insist? – playing out in the streets of Philadelphia that recruits ordinary strangers to become "agents of divine nonchalance."

Reading that phrase is bound to result in a whole lot of eye-rolling.

However, this is not the story. The mystical power of other people and the ways they can make life better – that's the narrative. It's a simple one . . . too simple, maybe. Keeping that philosophy from succumbing to sugar shock, however, is the sadness underneath all the imaginative, old-timey weirdness. If these people are drawn to the magic of "Elsewhere," it's because regular life has overdosed on sorrow. That, at least, is relatable.

Peter's first mission connects him with Simone (Eve Lindley), a cheerful, sardonic museum docent who is everything Peter isn't. Simone throws herself into the game without a mote of skepticism, although at every turn she braces for disappointment. Soon after they meet Janice (Sally Field), a retiree who sees this game as a distraction from her ordered life, and Fredwynn (Andre Benjamin), an obsessive, possibly joyless skeptic keen to know the true purpose behind this game.

Opening the series from the standpoint of Peter makes sense given the character's emotional blankness, which Segel taps into by fixing his expression in the manner of someone living with a chronic stomachache. The actor does not often veer away from this note in the first four episodes, so when he does chance a gentle, awkward smile this feels like a small win.

This means Segel's performance and Peter's personality pales beside that of the animated Field or the jabbing corners Benjamin shapes into Fredwynn's moods, recognizable traits in performances from the actors. And this serves to highlight Lindley as the breakout of "Dispatches."

In Simone she channels brightness that's easily shattered, the sort of persona belonging to a person that's been broken and had to fix themselves over and over again. Lindley and her character are trans, a trait that has as much weight in this world as Simone allows of it. This aspect of the storytelling speaks to the care taken to flesh out each person.

In a show that demonstrates a sharp awareness of the viewer's perspective, of the medium of television and the ways in which culture and entertainment train us to think about the world, that level of care and empowerment is meaningful.

These four likely would not meet save for these circumstances, which is one of the main points of "Dispatches," that human beings require connection to the greater world in order to thrive. A recurring conceit of the show has Grant positing to the audience that each of the main characters – Peter, Simone, Fredwynn and Janice – "is you." By themselves that line has no power; viewed in the context of these lives it becomes the ultimate bridge to empathy, elation, and heartbreak.

Also in the way of myriad series and tales propelled by adventures shared by strange bedfellows have shown us, their journey isn't one story but several with objectives shared and singular. Despite Octavio's guarantee of refraining from the obligatory background introductions for Peter, the opening four episodes of "Dispatches" purposefully profile of each character through episodes depicted from their point of view.

In this sense the series speaks to the audience's curiosity and acknowledges some nagging doubts by addressing them through each character, seen by way of executive producer and showrunner Mark Friedman structuring the first four episodes as a journey from Peter's uncertain initiation to Simone, the true believer, to Janice, a woman in the throes of an existential crisis, to Fredwynn, the guy who doesn't trust any of it.

Translation: Anyone who isn't quite buying this malarkey after three hours might want to stick around for Fredwynn. They might discover that Fredwynn, as the narrator intones, "is you."

This presumes that "you" care enough to make it that far – and some will. As for whether the series can sustain the mystery for a full 10 episodes, that's anyone's guess.

But I do wonder and fret over how broad of an audience "Dispatches" can win over in this harrowing time of ours, where so many have plummeted out of the habit of allowing for playfulness and the necessity of permitting ourselves that grace. Simone frequently urges her companions to look around and insists, "there's magic everywhere if you see it." A lot of people simply aren't inclined to believe that. As for those who do, glorious rewards will abound . . . we hope.