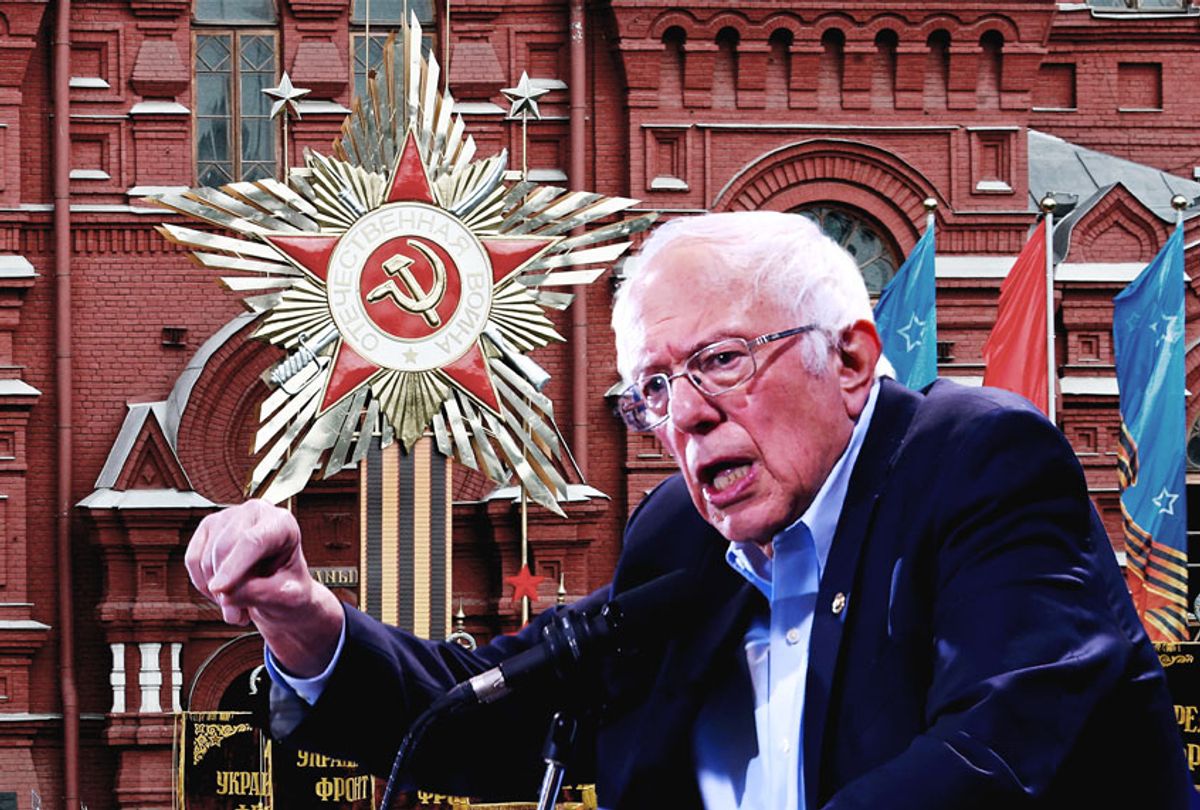 For over three years, Russia has been an issue of great concern, if not panic, in our media. Back in 2018, FAIR (7/27/18) warned that if Bernie Sanders or another progressive movement picked up steam, corporate media would claim that "any challenge to the establishment is likely a Kremlin-funded astroturf effort." For establishment Democrats, we wrote:

Russiagate allows them to ignore calls for change and not scrutinize why they lost to the most unpopular presidential candidate in history. Since Russia hacked the election, there is no need for introspection, and certainly no need to accommodate the Sanders wing or to engage with progressive challenges from activists on the left, who are Putin's puppets anyway.

Despite being perhaps the major politics story of the last three years, Russiagate ultimately ended in a flop for those most committed to it. Robert Mueller's extensive report found no collusion, and Donald Trump was not removed from office. Contrary to media narratives, the walls were not closing in on Trump, and he stands a strong chance of re-election in November.

Fortunately, there is a surging frontrunner candidate, overwhelmingly popular among Democratic voters and outpacing rivals among independents, who beats the president in 68 of 73 national head-to-head polls. Recently leaked audio of a private Trump conversation from 2018 also showed that Sanders was the one running mate Trump feared Hillary Clinton would choose in the 2016 election — "the only one I didn't want her to pick."

But for Democratic insiders, Sanders' early successes in the race for the nomination are an ominous sign that society is falling apart. Commenting on Sanders' blowout victory in Nevada, former Clinton strategist James Carville told MSNBC (2/22/20): "The happiest person right now? It's about 1.15 a.m. Moscow time. This thing is going very well for Vladimir Putin." Host Nicolle Wallace backed him up: "That's absolutely right," she replied. Why is Putin happy? Obama's White House communications director, Dan Pfeiffer, explained to MSNBC's "Meet the Press" (2/23/20) that the Russians "are trying to give Trump the opponent that Trump wants." 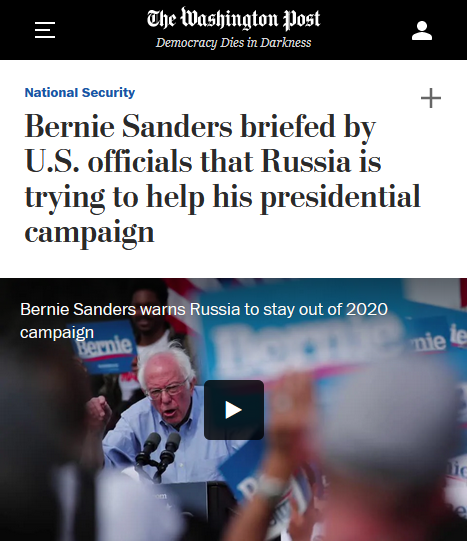 In the Washington Post (2/21/20), unidentified "people" assserting that anonymous "U.S. officials" are claiming that Russia is "attempting to help" the Bernie Sanders campaign in unspecified ways becomes, by the sixth paragraph, "the disclosure of Russian assistance to Sanders."

In this much-publicized article, the Washington Post (2/21/20) also insinuated that Sanders was a Kremlin asset. It began by stating:

U.S. officials have told Sen. Bernie Sanders that Russia is attempting to help his presidential campaign as part of an effort to interfere with the Democratic contest, according to people familiar with the matter.

President Trump and lawmakers on Capitol Hill also have been informed about the Russian assistance to the Vermont senator, those people said, speaking on the condition of anonymity to discuss sensitive intelligence. It is not clear what form that Russian assistance has taken.

Thus, the Post published a third-hand account of unspecified "Russian assistance" based on what unidentifiable people in Washington heard from anonymous "intelligence" sources.

At the risk of stating the obvious, it is the job of the covert security services to lie and manipulate. They are among the least trustworthy groups in the world, journalistically speaking, as part of their profession involves planting fake information. The only group less deserving of blind faith than spies would be anonymous spies. Yet the Post still decided to run with it, despite the fact that media have recently been badly burned reporting fake news from faceless sources on Russia (FAIR.org, 12/3/18). Furthermore, the "help" the Post refers to is ambiguous, telling us nothing of the impact of the supposed assistance. Jumping up and down "helps" create earthquakes, while blowing on a brick wall might help blow it down. But the actions are virtually inconsequential.

Despite this, the poorly sourced, evidence-free and quickly walked-back report became the basis for endless stories linking Russia and Sanders. GQ (2/23/20), for example, asked its readers "why exactly does Putin love Bernie?" Vox (2/22/20) claimed that Sanders' "chaos" was good for Russia and Trump. Meanwhile, the New York Times (2/24/20), disregarding all polling data, stated categorically: "Sanders would be Trump's weakest opponent." And why does Russia want Trump re-elected? A slew of articles (e.g., Politico, 2/23/20; USA Today, 2/23/20; New York Daily News, 2/23/20) repeated the line that it is because "he has essentially ceded the Middle East to Russian interests" — something which must come as a surprise to the families of the thousands of civilians killed by U.S. airstrikes in the Middle East during the Trump administration.

What I heard from the FBI is that Russia would like Bernie Sanders to win the Democrat nomination and would probably like him to be president, understandably, because he wants to spend money on social programs and probably would have to take it out of the military.

Thus, as Aaron Maté argues in the Nation (2/25/20), "Moscow" is not a real place anymore, but a stand-in for a political agenda — more money for social programs, less money for war — that anonymous officials want to combat. As media have been unable to convince the electorate that a "moderate," "pragmatic" candidate is best (FAIR.org, 7/17/19, 8/21/19), perhaps they can outsource the task to a mythical Moscow. 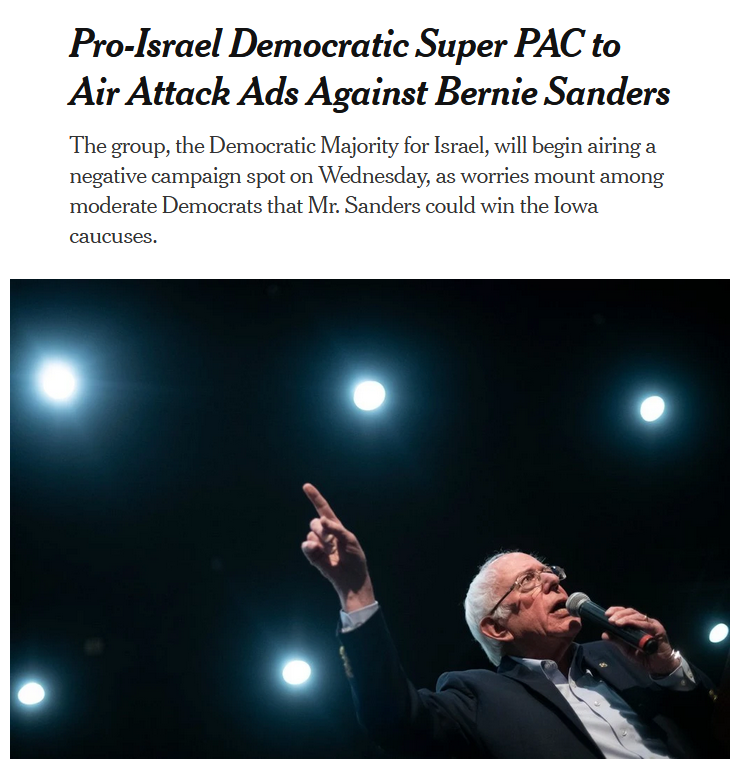 Intervention in the election on behalf of a foreign country doesn't raise alarms when it's not an official enemy (New York Times, 1/28/20).

At the same time that the political establishment is so concerned about potential, unproven interference, the open lobbying on behalf of another foreign government is a non-story. An AIPAC-linked super PAC, Democratic Majority for Israel, has spent $1.4 million on anti-Sanders attack ads in Iowa and Nevada. When this is reported on (e.g., New York Times, 1/28/20), it is treated as business as usual — not as an occasion to hand-wring about foreign "meddling" in US elections.

Corporate media are doing their best to smear the progressive candidate that threatens their own business interests. Sanders, unlike Bloomberg, will likely not be spending billions on TV ads, and his ideas on taxing large corporations directly threaten them and their advertisers. Yet despite attempts to marginalize, smear or equate him with Donald Trump (FAIR.org, 6/27/19, 7/26/19, 1/24/20), he continues to rise in the polls. If media have had to revive Russia as a reason to explain Sanders' victory, it means things are probably not going very well for them.