Female candidates are being squeezed out on the eve of Super Tuesday, but there's no reason to give up this early 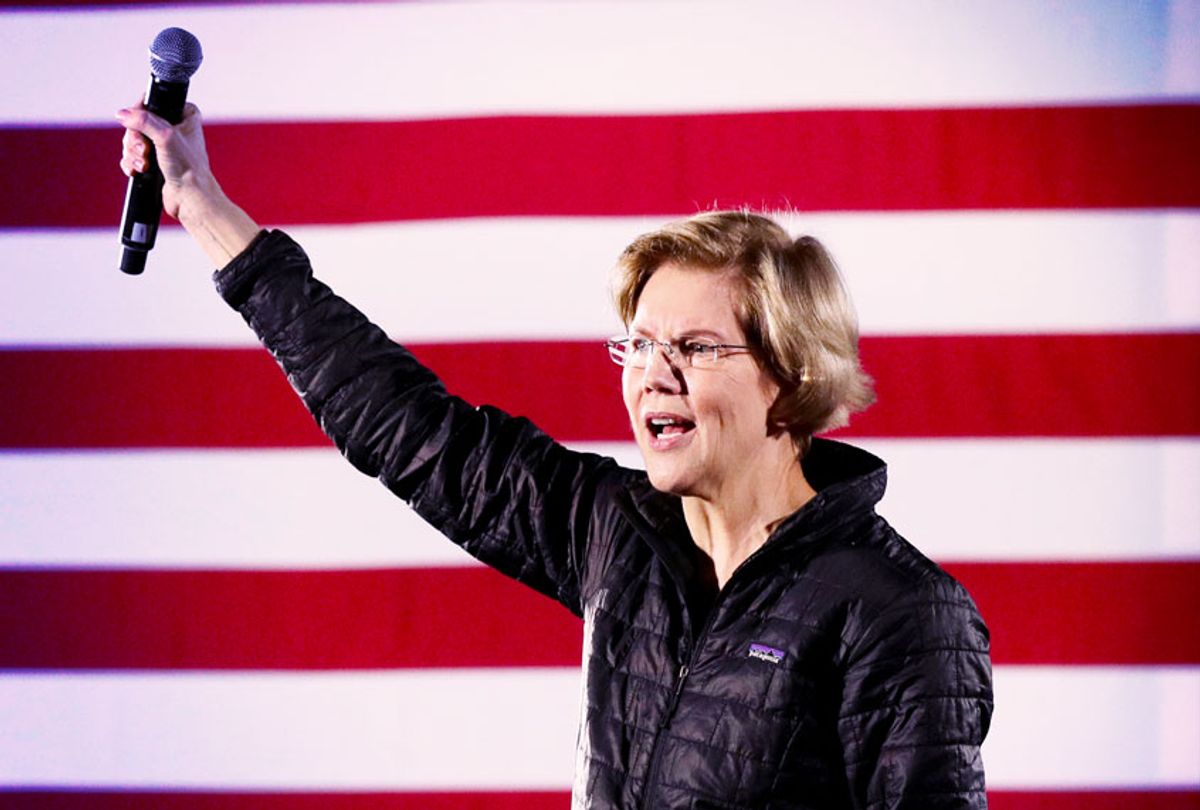 On Sunday night, Pete Buttigieg, the 38-year-old former mayor of South Bend, Indiana, bowed out of the Democratic presidential primary race. That departure came shortly after Tom Steyer, the 62-year-old hedge fund billionaire, also left the primary race, after his disappointing showing in South Carolina, despite dumping a ton of money on ads in the state. In response, a couple of major media figures felt compelled to make an observation about how these drop-outs affected the median age of the male presidential Democratic candidate.

Joe Biden can now run as the youngest male candidate left in the field.

.@JoeBiden, 77, is the youngest man left in the Democratic primary.

Of course, without the gender qualifier, this observation becomes false. Sen. Elizabeth Warren of Massachusetts is 70, seven years younger than the youngest of those three men. (Sen. Amy Klobuchar of Minnesota, who is 59, announced on Monday afternoon that she too is withdrawing from the race.)

It is equally true that Biden could run as the youngest candidate born in the Eastern time zone, after all. But for whatever reason, that trivial fact, held in common by former Vice President Joe Biden, Vermont Sen. Bernie Sanders and former New York City mayor Mike Bloomberg, doesn't merit the same kind of interest as their shared gender identity.

No, the gender of the older candidates is deemed relevant because — even though many commentators report this as if saying it more in sorrow than in glee — the election has been undergirded by the belief that being male confers a real advantage and that voters should put great value on maleness when choosing who to vote for.

In private dens and in conversations at bars and coffee shops, on social media and on cable news, the same worry is expressed — Americans won't vote for a woman against Donald Trump! So many voters are being made to believe that, as much as they might prefer Warren (or, until today, Klobuchar) to the men in the race, they'll have to suck it up and vote for one of the guys. Because a guy, we are told, is what general election voters will demand.

(All of which is better, at least, than the more vitriolic sexism we've heard from some corners, such as accusing Warren of "gender tokenism" or making snake-hissing noises at Warren for affirming that she heard Sanders echo the same concern about a woman's chances that radiates from every corner of our society right now.)

All of this, as voters should understand before head to the polls on Super Tuesday, is poppycock.  There is no reason to be afraid to vote for a woman, if she is the candidate you like best. Indeed, the only way to get this country to a point where a woman can win the presidency is for people to suck it up and vote for female candidates. If you don't like the problem of sexism, don't contribute to it by voting for men strictly out of fear.

It's worth remembering that there was nothing inevitable about Hillary Clinton's defeat in 2016. She won nearly 3 million more votes than Trump, showing that, at the very least, a significant plurality of Americans will vote for a woman. Her losses in swing states were by the slimmest of margins, literally to a mere 80,000 votes spread strategically across three states. If we could have re-run that election 100 times with minor tweaks each time — to the weather, to the headlines the week before — Clinton would have won most of those. There's even evidence that the perception that Clinton was nearly certain to win contributed to her loss, by breeding complacency that led some of her likely voters to stay home.

People are likely not to be as complacent this time around.

Yes, Clinton rolled the equivalent of snake eyes in the 2016 election. But as any dice player knows, rolling that deuce doesn't change the fact that your next roll is more likely to be a seven. The lesson from 2016 shouldn't be that a woman can't win, but that a woman can win.

But, Amanda, you might say, it's too late now to vote for a woman. Sanders and Biden have too big a lead!

Perhaps. Or perhaps it's worth remembering that Sanders currently has 58 delegates, of the 1,991 he'll need to win the Democratic nomination. Biden has 50. Warren has eight.

To put that arithmetic another way, Sanders is 1,933 delegates short of what he needs, and Warren is 1,983 short. The media may be putting this primary to bed, but it's not even close to over yet. After Super Tuesday comes and goes, it may be that Sanders or Biden have a lead big enough to push the women out of the race. But right now, looking at the actual numbers, that's simply not true. It's certainly no reason for voters to talk themselves out of voting for Warren, if that's what they wish to do.

Unfortunately, the media creates these damning and self-fulfilling prophecies about who "can" and "can't" win. By prematurely declaring this to be a race between two or three men, and ignoring the women, pundits and reporters have made it more likely that voters who want to vote for a woman will simply give up. People aren't likely to do what the supposed experts tell them is a waste of time!

Similarly, the sexism female candidates have experienced becomes another self-fulfilling prophecy, which is both the fault of voters and pundits. A woman can win — right up to the point when we tell ourselves that she can't. Since we're the ones creating this sexist reality, we're the ones with the power to stop to it.

It's not too late, at least for Warren, who has healthy poll numbers in many Super Tuesday states — and probably would have even better ones if it weren't for the wildly sexist coverage. This is a wild time in politics, and things aren't nearly as certain as some pundits would have you believe. Right now, FiveThirtyEight projects that no one is likely to win a majority of delegates in the Democratic primaries! Which could lead to the most seriously contested convention in generations — an unlikely but definitely not impossible outcome.

In conditions like this, there's no reason for ordinary voters to try to perform some half-baked game theory when making a voting decision. This is the perfect opportunity to vote your conscience and let the winds take us where they will. After all, we won't get a chance to follow our arrows in the general election, where "voting blue no matter who," as annoying as that phrase may be, is the only moral choice.

So don't let anyone tell you otherwise. If you want to vote for a woman, do it. If enough of us do it, that could change this race dramatically. Who knows? We might even get a president who was born in the Central time zone.