"They are not victims": Director Ken Loach on his working-class heroes in "Sorry We Missed You"

In the film, a man runs a delivery franchise, but discovers this has negative effects on his debt and family life 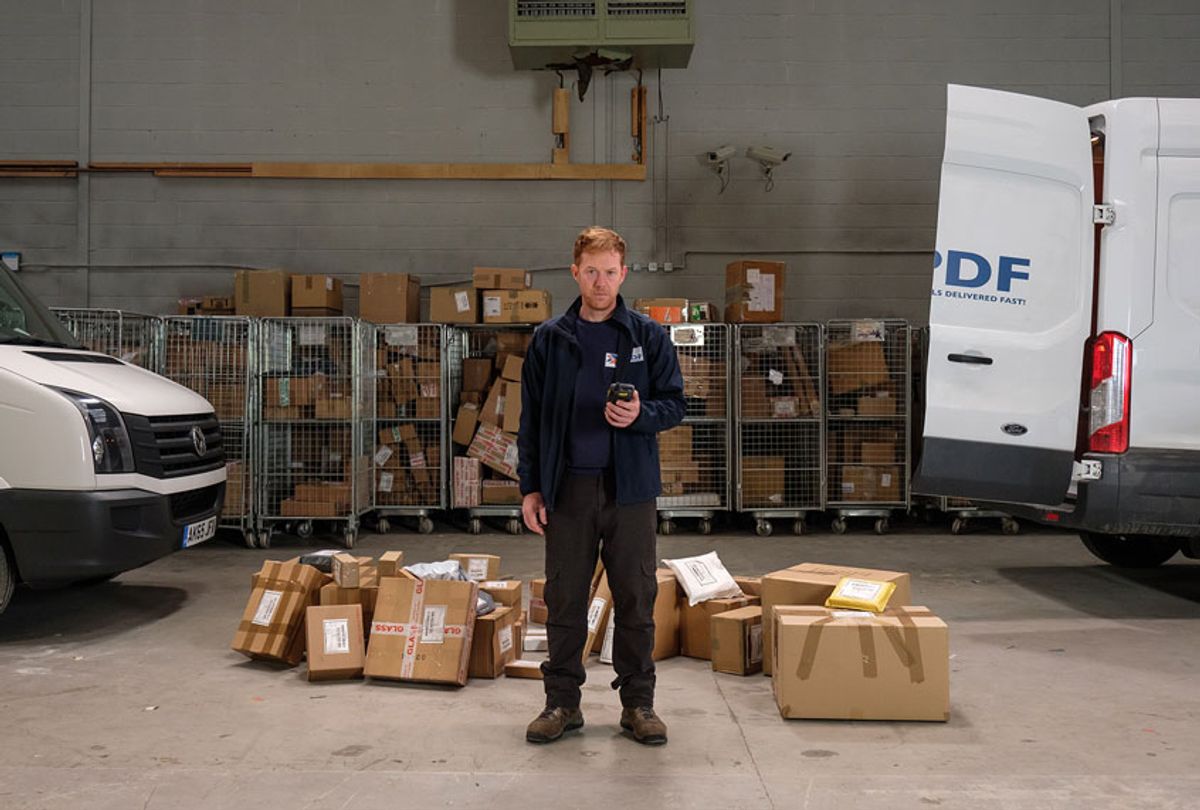 Kris Hitchen in "Sorry We Missed You" (BBC Films)
--

British director Ken Loach has been making hard-hitting social realist films for more than 50 years. His acute lens captures the struggle of the working-class — and the questioning of authority — in ways that move viewers. The pointed social commentary in films such as "I, Daniel Blake," and "My Name Is Joe" — both co-written by his frequent collaborator Paul Laverty — sting as Loach shows, with absolute compassion, the length working men and women go in their struggles to survive and maintain their dignity as the system relentlessly beats them down.

In his latest film, "Sorry We Missed You," Loach and Laverty introduce Ricky (Kris Hitchen) and Abbie (Debbie Honeywood), who hope to escape a mounting pile of debt when Ricky gets a job delivering packages. Could this be the answer to Ricky's dreams of owning a home within two years of starting his new gig?

However, despite being "his own boss," Ricky must report to Maloney (Ross Brewster), the manager at his depot. And his startup costs for the job involve selling Abbie's car so Ricky can afford a delivery van. As Ricky works 14-hour days, six days a week, Abbie is doing odd shifts as a caregiver. What's more, their teenage son, Seb (Rhys Stone) is skipping school and getting into trouble. Their pre-teen daughter, Liza Jane (Katie Proctor), is disturbed by the splintering family.

Loach's film shows how working long hours for little pay has negative effects on the family, and what forces are in play to keep the working class from surviving, never mind getting ahead.

Loach talked with Salon about "Sorry We Missed You," as well as insecure work, the fragmentation of society, and Brexit.

What is common to all your characters — in addition to their struggle for a decent, if not better life — is that they have their pride. In "Sorry We Missed You," Ricky tells Maloney he would rather starve than go on the dole. What moves you about the characters in your films?

I worked with two to three brilliant writers, and the films belong to the writers as much as anyone. The characters we put on screen — I haven't thought about it in this way before — but it is that they don't give up easily. They are not victims. They battle hard and do their best. Most of them have an optimism, and an energy and cheerfulness about them. Not all, obviously, but there's a strength and determination about them that comes out in different ways. Ricky in this film bought in to the idea he's an entrepreneur, but it is a lie.

"Sorry We Missed You" shows how easy it is for Ricky and Abbie to slip into debt, and how hard it is for them to escape it. What observations do you have about how the working class is being forced to make decisions that often hurt them?

I think it's a consequence of politics of the last 40 years where the trade unions and the left, which have been defending the interests of working-class people, have failed. The unions were defeated by Margaret Thatcher and lost the ability to represent workers collectively. They are weaker, and that is because they could have fought the right wing and didn't. The left [Labor] party, led by Tony Blair [and others], effectively did nothing to restore the labor movement's rights. The consequences are insecure work, no sick pay, and those things that would have been inconceivable some years ago, That's the measure of our defeat.

I like how you contrast Abbie's work with Ricky's. Who do you think struggles more or works harder? And surely, there is a wage gap.

I think they are both badly off in different ways. Abbie will get paid less. Ricky carries the burden of being fined and goes into debt to get a van to do his job. He's 40,000 pounds into debt at the start and must keep working to pay that debt. If he's in an accident or can't go into work, he's fined. He must pay for equipment that's lost. He's in a more dangerous position, but Abbie is exploited by poverty wages and no minimum wage. And both of them can lose their jobs at a moment's notice.

One of the things I love about your films is how you bash authority. It's not just that Maloney is a hard ass, or that the cops are fooled by Seb's antics, it's that the hospital keeps folks waiting for three hours. But there are kind souls, such as the officer who tries to talk Seb into behaving. What can you say about the contempt and respect you show for authority in your films?

It's not the people doing the job on the ground — they are victims too. The police in this case have great humanity as when Seb is caught shoplifting. The policeman there shows real care and humanity in how he deals with Seb. It is never the people on the ground, like the nurses working with the public in impossible situations, who are to blame — it's the people in power who benefit that are the worst.

I liked the point that Seb makes about people buying things they don't need (and by extension, perhaps can't afford). Your film critiques the job insecurity that is a byproduct of that culture in that for people to get same/next day delivery, people must work these difficult jobs for low pay. What are your thoughts on this?

In a way it's a structural issue. People will take the easiest way to get the same item at a cheaper price. But we have to have the short-term benefit not be in conflict with the long-term. It's not just exploitation of labor, but the destruction to the environment. A man driving a van delivering packages uses more fossil fuel — how do we gain? The short-term benefit is not the same as the long-term one.

The post office used to be a public service, owned by the people, and a nationalized service. It was privatized recently. The left thinks it should be taken back into Public Ownership with people employed on proper contracts and paid decent wages. And alongside that, you have to have a tax system that favors the shops in the towns and cities, not the warehouses. It's more expensive, and not so quick as when you order things online, but there are a number of factors involved in it. We all lose if the high streets of our towns and cities become filled with nothing but betting and charity shops. That's where we meet and have a sense of identity. The fragmentation of a society that stays at home is another great loss.

Seb's future is in doubt, to a degree, and he and his parents fear that he will end up like them in insecure employment. How much will Brexit have to answer for the state of the economy in Britain?

Brexit was a conflict between two sides of the right wing. The left position is that the EU is a trade organization for big industry. That argument wasn't heard. The argument that was heard was the two right wing sides — businesses who said they want to be part of the market and have easy access into Europe for our goods. We were prepared to accept the minimum requirement for environment regulations, and no protection for workers' rights. They want the benefits of business. The far right wanted to leave because their intention is to exploit workers more with lower wages, and trade deals with the U.S. and cheap economies that undercut Europe on price wherever they can. It was a choice between the harsh and the very harsh. The left position was completely ignored.

Your films will likely not get seen by the people they are about, but instead viewed by liberals who may feel guilt for their privilege, but unable to do much about the situation. How do you want viewers to receive your films — as cautionary tales, or calls for action? What can we do?

In our country, we are having community screenings outside cinemas to make the film available to trade unions, community centers, football clubs, and church halls and in areas where people who do this work live. We are conscious of preaching to the choir. Ideally, you want the film to be seen by anyone with an open mind and think that this is not about a bleeding heart but organization, joining a union, and fighting back. But I also want viewers to enjoy meeting the characters, sharing their lives, smiling with them, weeping with them, and be angry alongside them and understand their world.

"Sorry We Missed You" will be released in select theaters on Friday, March 6.