Biden vs. Bernie: If it's down to a two-man race after Super Tuesday, how do we decide? 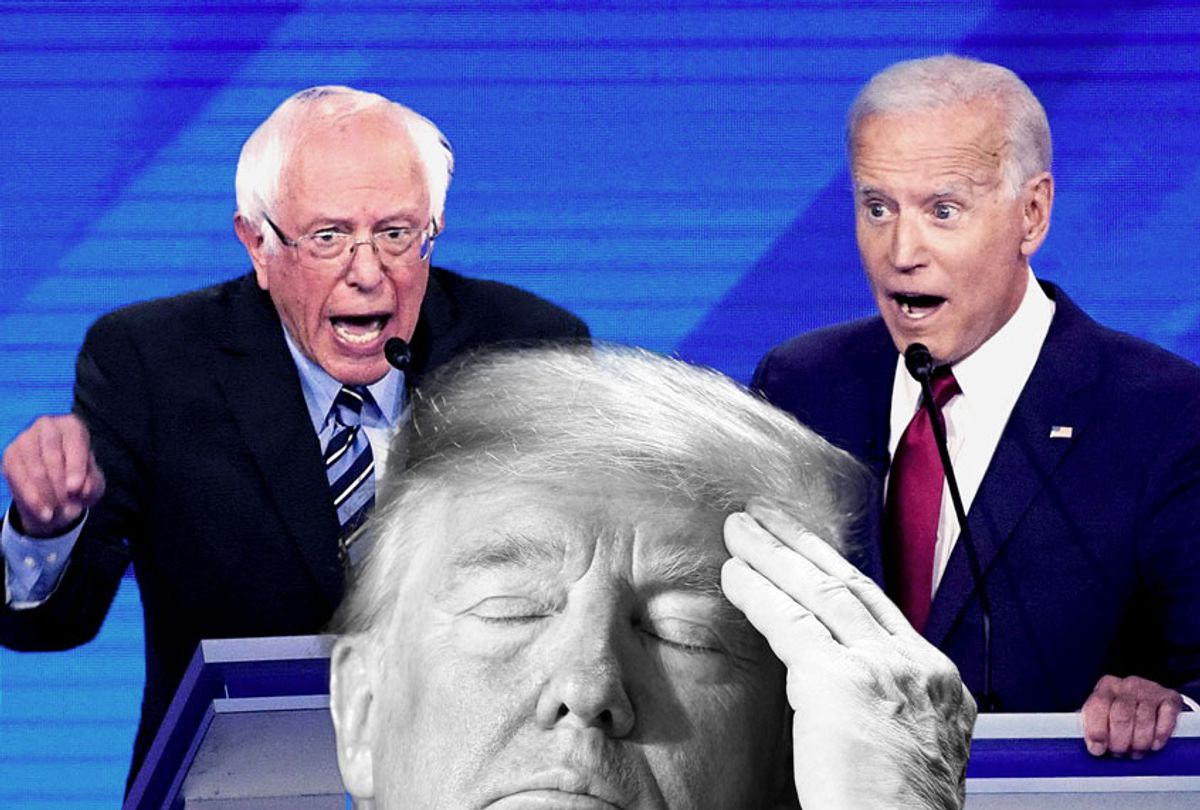 Here's an unsettling fact of life, now that Amy Klobuchar, Tom Steyer and Pete Buttigieg have dropped out of the Democratic primary race: The Super Tuesday polling you've seen so far has been rendered more or less irrelevant. All of the polls conducted through this weekend measured support for a field of seven candidates, but that number, as of Monday, has been cut to four: Joe Biden, Mike Bloomberg, Bernie Sanders and Elizabeth Warren.

Unless Warren or Bloomberg can generate a streak of wins, the Democratic nominee will either be Sanders or Biden, one of whom has to be elected president in November.

We still have a vague sense of who might win the most delegates on Super Tuesday, but with two prominent "moderates" dropping out — and both of them endorsing Biden on Monday night — the former veep's delegate share will probably get a noticeable boost.

Frankly, it's fair to be dubious about the polls either way, especially when it became clear that the people who respond to pollster phone calls are voters who are OK with answering their phones when the caller ID says "Unknown" or an otherwise unrecognizable number. Some of those people — not all, of course — might be a little bit … off. With that as the starting point for polling integrity, I get the sense that we don't really know a damn thing about who's winning the quadrennial edition of Democratic Thunderdome.

There's one thing that's almost certain now, and that's a protracted primary race, not unlike 2016 and 2008, in which the top candidates, almost certainly meaning Biden and Sanders, routinely flog each other through at least April 28, when Democratic voters in New York and Pennsylvania hopefully put an end to it. Even if one of the top two guys is leading with hundreds more delegates, it's unlikely the furious trolling on social media will stop until someone quits. In other words, Silly Season is just getting started.

Merely typing the word "Pennsylvania" here triggered flashbacks to the previous two highly contested Democratic primaries, when cable news pundits and party activists alike began to look deep into the primary schedule with a tone of "Aw, crap" in their voices. Stacked awkwardly on top of all that are the newly recycled warnings of a "brokered convention," which never actually amount to anything. It's reasonable to conclude that no matter how the remaining primaries turn out, there won't be a contested convention, despite the turgid, old-school political hacks who crave a return to yesteryear and the era of smoke-filled rooms and fourth or fifth ballots cast during the wee hours of the morning. (In fact, no convention in either major party has gone to even a second ballot in 68 years.)

None of that is likely to happen, although, as I say, the April 28 primaries, which include Pennsylvania and New York, could well decide the nomination. In the meantime, Democrats will be clawing off each other's faces as Biden and Sanders swing from bungee cords in the domed cage of primary politics, reaching for whatever spiked weapon will win the day.

The good news, based on what I'm observing so far, is both of the top two candidates have a reasonably decent chance of defeating Trump. The dominating factor deciding the general election, at least when it comes to the electoral model devised by Rachel Bitecofer, has less to do with who the candidate is and more to do with Democratic energy. Under this theory, it's turnout — the "blue wave" phenomenon — that indicates a winning Election Day for Democrats, barring any "shocks to the system." But don't get happy.

Bernie Sanders has the crowds and an on-the-ground infrastructure that's been under careful construction since 2015-ish. On the other hand, Joe Biden represents a significant degree of familiarity, normalcy and personal decency, which generates its own kind of energy — and Biden enjoys an obvious coalition of older Americans, the most reliable voters, especially African-Americans, college-educated women and even some moderate NeverTrump Republicans.

Meanwhile, the liabilities of both candidates are well known. Also well known is the inchoate dumbness of Trump's future attacks against each of them.

What if it's Bernie?

If Bernie Sanders is the nominee, we'll see a new Red Scare until Election Day. As we've already observed, Bernie will be framed as a communist, even though he's not. In fact, he's not even a genuine socialist. He merely wants to expand policies and programs that already exist: Medicare, Social Security, progressive taxation and so on. Accuracy, however, is irrelevant in the age of Trump's $1 billion "Death Star," tasked with injecting flagrant disinformation into social media. So the Trump machine will absolutely exploit the ignorance of swing-state voters when it comes to socio-political definitions, seizing on public confusion to falsely peg Sanders as America's answer to Fidel Castro or Joseph Stalin.

Hopefully, Bernie will be prepared to counter-punch Trump by underscoring the president's own flirtations with "undemocratic socialism," in the form of repeated support for Medicare and Social Security, as well as Trump's payouts to farmers hurt by his pointless trade wars.

What if it's Biden?

If Joe Biden is the nominee, it'll be all about Hunter Biden, Burisma and Ukraine until Election Day. Democrats would do well to brush up on the dumbness of Trump's conspiracy theories on that front because this'll obviously be the "but her emails" of 2020. For example, immediately after Biden's decisive South Carolina victory, Sen. Ron Johnson, Republican chairman of the Homeland Security and Governmental Affairs Committee, expressed his intention to subpoena officials linked to Hunter Biden and Burisma.

"Look at Hunter and Burisma," will be every other sentence blurted out of Trump's mouth. Trump endured being impeached, and endured a televised impeachment trial in order to acquire this weapon against Biden. Consequently, he'll beat it to death. And voters won't need to understand the Cyrillic details of what Trump and Rudy Giuliani invented about Biden. All they'll need to grasp is the top line of every Trump attack ad: Biden supposedly used his influence to stop a Ukraine investigation into Burisma to protect his son.

The Ukraine story is a potentially catastrophic risk for Trump, however, because it was his obsession with Ukraine and Burisma that led to his impeachment in the first place, a fact that Biden's people can repeat and repeat and repeat every time Trump goes there. When Trump says "Burisma," Biden can hit back with impeachment, extortion and especially the fact that Trump felt he needed to cheat in the election in order to win. If Biden doesn't use the word "cheater" in every attack ad and during every stump speech, he'll be leaving a large and effective weapon on the ground.

One more thing on Biden as the hypothetical nominee: Trump will also accuse Biden of being a socialist and/or communist, reality be damned. In other words, Republicans will likely seek to gin up a Red Scare, irrespective of who the nominee is.

Take your pick. Who's the bigger risk as we enter the next phase of the primaries? Looking at each candidate — as a current supporter of neither — Biden and Sanders are each vulnerable to being spattered by Trump's mud-slinging. It's just a matter of degree, and what will stick the most. One thing's for sure: Neither candidate is perfect, but each one has the real potential to make Trump a one-term loser.

Just for fun, I plugged in the latest polling averages "versus Trump" from Real Clear Politics into the Electoral College map. According to the state-by-state numbers, if the election were held today, Biden would defeat Trump with around 341 electoral votes, while Sanders would win with around 330 electoral votes. Again, polls are absolutely no guarantee of future performance, and anything can happen between now and Nov. 3.

Democrats, ultimately, will have to decide between Sanders' grassroots energy and youthful fanbase versus Biden's broad base of support and Obama-era cred. Simultaneously, Democrats will have to land on a nominee without damaging that nominee too badly during at least eight more weeks of shovel fighting. Once that's done, the voters who end up on the losing side of the primaries will have to figure out a way to muster a needs-of-the-many posture to support the nominee with maximum enthusiasm. The future of almost everything depends on Democratic voters prioritizing the cohesion of the nation — the very existence of this republic and the ousting of our current tyrannical president — over petty intra-party revenge.

The terms of the actual revolution, it turns out, is everyone versus Trump. Reality versus fiction. Democracy over the "absolute" rule of a dictator in the White House.