"Not surprising, but yet unbelievable": UC Santa Cruz students fired over wildcat strike

Struggling to survive on meager wages in an expensive town, UC administrators retaliated against striking students 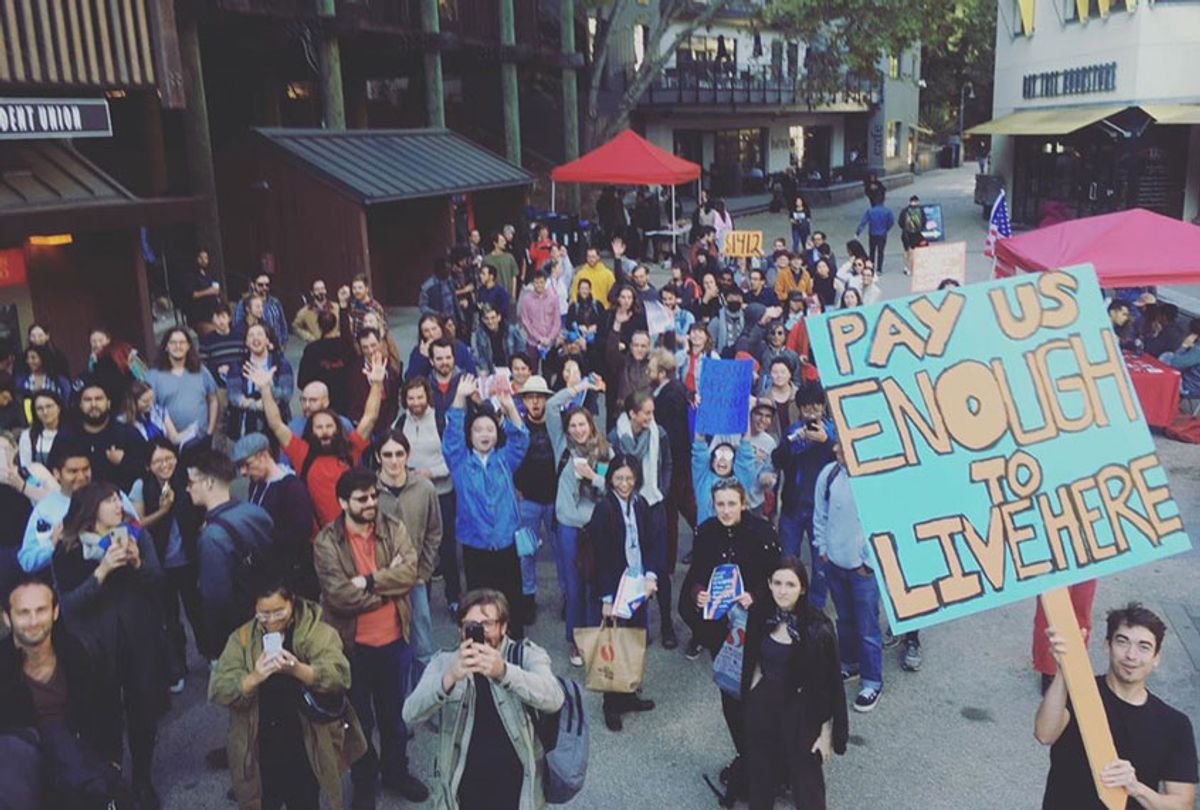 Amid mounting threats of termination and incidents of police brutality on the picket line, dozens of graduate students involved in a wildcat strike at the University of California, Santa Cruz (UCSC) faced the ultimate retaliation from their employer: a mass firing.

On Feb. 28, University of California (UC) administration sent out official notices of intention to terminate to 54 graduate students who had yet to submit grades for the fall quarter. These grad students were withholding grades as a labor action in their wildcat strike, an effort to win a cost of living adjustment (COLA) pay increase. In addition to the letters of intent, an estimated 20 grad students received a one-sentence email that they would not be rehired as teaching assistant for the spring quarter.

Yulia Gilichinskaya, a fourth-year PhD student in Film & Digital Media, received an email with the message that she would be terminated. For Gilichinskaya, who is an international student, this could mean having to leave the country, as her visa was contingent on her student employment.

"For international students, including me, there is a real possibility of leaving the country . . . . it's unclear if it's going to happen at the moment but it's a real threat," Gilichinskaya told Salon. "I'm not at home packing, but I do realize that it might be a real thing."

Gilichinskaya said she wasn't surprised by the firing, because she took the previous threats from Janet Napolitano, president of the University of California system and the former governor of Arizona, seriously.

"It is unsurprising, but yet unbelievable," Gilichinskaya said. "I took the threat seriously, so I expected them to follow through, but I also see the ripple effects and how other campuses are fired up; they're outraged  that this is how the administration responded to this labor action."

As Salon previously reported, graduate student teaching assistants at UCSC make $2,434 a month before taxes for only nine months of the year; whereas the median monthly rent in Santa Cruz County is $1,685, according to data from the American Community Survey. Graduate students have been on a wildcat strike demanding a $1,412 a month raise (called a cost of living adjustment, or "COLA") for all UCSC graduate students in order to alleviate the rent burden. Both undergraduates and graduate students at the esteemed research institution have spoken out about student homelessness and/or housing insecurity for years.

The drastic action has prompted UC students on other campuses to take notice. Petia Yanchulova Merica-Jones, a student researcher at the University of California, San Diego's department of physics, told Salon many at her university "feel strongly" about how the UCSC administration responded to the wildcat strike.

"This week on Monday we had a march and a rally that was meant to bring awareness to the issue, and an action of solidarity with the fired grad students at UCSC," Merica-Jones said. "We have similar circumstances here — the cost of living in San Diego is high — and we have sent our own demands to our administration and we haven't heard a response."

She added there is fear that the administration at UCSD might respond in a similar way.

"This is something we may experience," she admitted.

In a statement by Interim Campus Provost and Executive Vice Chancellor Lori Kletzer at UCSC last week, the firing was positioned by the administration as a last resort.

"Unfortunately, despite our best efforts to find an amenable resolution, 54 teaching assistants have continued to withhold fall grade information," Kletzer said in the statement. "As a result, we have been left with no choice but to take an action that we had truly and deeply hoped to avoid." UC administration previously offered a retroactive, $2,500 stipend to all MFA and PhD students at UCSC.

Salon reached out to UCSC for comment for this story, and did not receive a response.

Jane Komori, a third-year PhD student in UCSC's History of Consciousness program, told Salon the firing is both "shocking and disappointing." Kamori, who is on a committee to organize strike funds, said that community support organized in the form a GoFundMe fundraiser should be able to help the fired students for the time being.

United Auto Workers Local 2865, the parent union for all graduate student employees at all UC campuses, filed several unfair labor practice charges against the UC for firing the grad students. It will also consider calling for a vote to go on a statewide UC strike.

Komori said she wonders if the UC will walk back on the firing.

"It's a pattern — they send unclear harsh communication about a disciplinary measure, and then everyone panics, and then they walk it back," Komori told Salon, adding that the support they've received has been "amazing" even outside of the UC system.

"Students at Penn State, Stanford, in Texas, the spread beyond the UC is really cool to watch," Komori added. "We've had people from Harvard and CUNY [City University of New York] visit us to see what we are doing and offer their support; it's really cool to see."