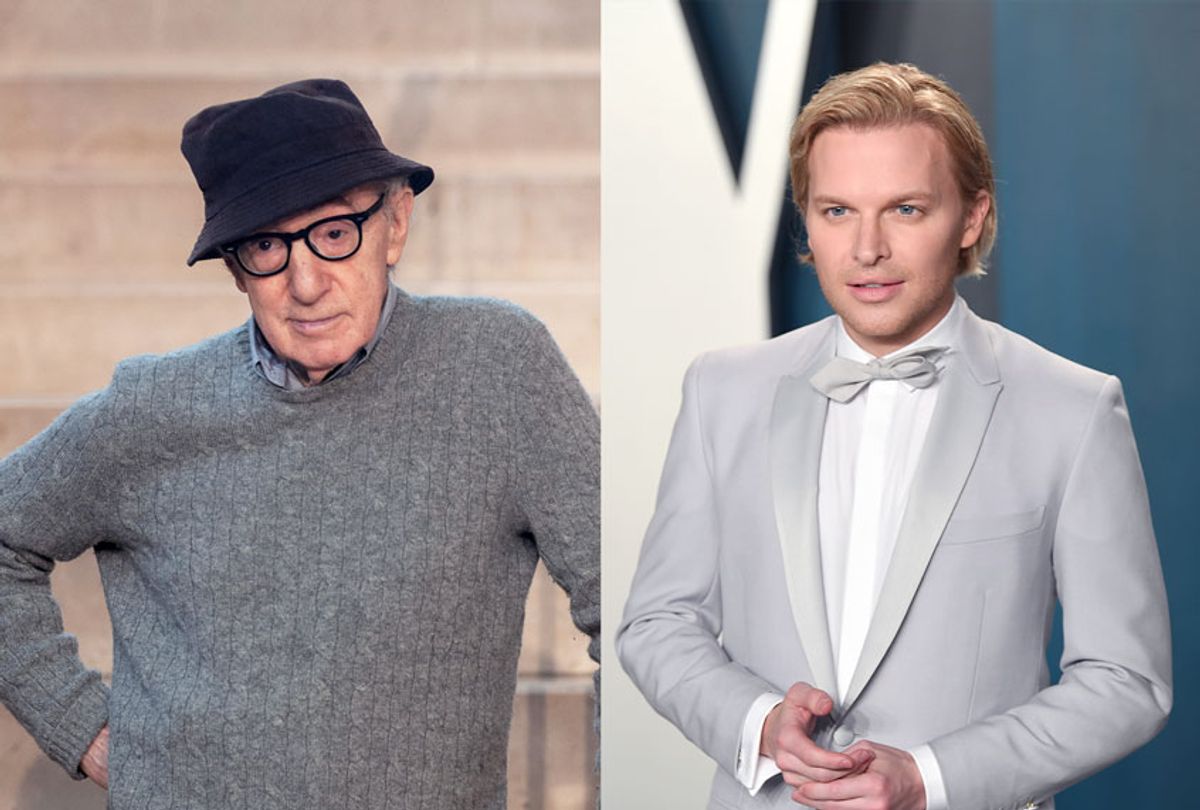 This article has been updated since publication to reflect Hachette Book Group's decision to pull Woody Allen's memoir.

Dozens of employees from the imprints Grand Central Publishing and Little, Brown and Company walked out of the Hachette Book Group's New York offices Thursday afternoon in protest of the company's decision to publish "Apropos of Nothing," the upcoming memoir from the embattled filmmaker Woody Allen.

Little, Brown and Company published "Catch and Kill" by Ronan Farrow, the estranged son of Allen, last year. The book detailed the challenges that Farrow faced as he investigated the allegations of rape and sexual assault against the disgraced Hollywood producer Harvey Weinstein, who is currently being held at New York's notorious Rikers Island prison complex awaiting a prison sentence.

Allen's adopted daughter, Dylan Farrow, has repeatedly accused the Oscar winner of molesting her when she was a child. Allen was never found guilty of a crime, though in a 1993 custody ruling, presiding judge Justice Elliott Wilk stated: "Mr. Allen's behavior toward Dylan was grossly inappropriate, and . . . measures must be taken to protect her."

The employee protest came after both Dylan and Ronan Farrow tweeted statements about Hachette's decision to publish their father's memoir.

"For the record, I was never contacted by any fact checkers to verify the information in this 'memoir,' demonstrating an egregious abdication of Hachette's most basic responsibility," Dylan Farrow wrote on Twitter. "On the other hand, my story has undergone endless scrutiny and has never been published without extensive fact checking. This provides yet another example of the profound privilege that power, money and notoriety affords."

My statement on the disappointing and, frankly shocking, news from @HachetteUS today. pic.twitter.com/h0zuAi0T7l

Ronan Farrow indicated that he would cut ties with the publishing house over its decision to publish the memoir.

"I was disappointed to learn through press reports that Hachette, my publisher, acquired Woody Allen's memoir after other major publishers refused to do so and concealed the decision from me and its own employees while we were working on Catch and Kill — a book about how powerful men, including Woody Allen, avoid accountability for sexual abuse," Farrow tweeted.

Hey, just wanted to share my thoughts on some recent news: pic.twitter.com/ovPczgx8pB

While "Catch and Kill" and "Apropos of Nothing" would be published by two different imprints — Little, Brown and Company and Grand Central Publishing, respectively — both divisions are owned by Hachette. In a statement issued to the New York Times, Hachette CEO Michael Pietsch said the company does "not allow anyone's publishing program to interfere with anyone else's."

In an email obtained by the New York Times, Farrow responded to Pietsch's stated policy.

"Your policy of editorial independence among your imprints does not relieve you of your moral and professional obligations as the publisher of 'Catch and Kill,' and as the leader of a company being asked to assist in efforts by abusive men to whitewash their crimes," he wrote.

Farrow wrote at the end of the message that he can no longer work with Hachette in good conscience.

"Imagine this were your sister," Farrow concluded the email.

Hachette did not immediately respond to Salon's request for comment. In a statement issued to Entertainment Weekly, Pietsch said he respected and understood the perspective of Hachette employees who decided to express their concern over the publication of Allen's book.

"We will engage our staff in a fuller discussion about this at the earliest opportunity," he said.

Several Hachette employees, including Laura Fitzgerald, tweeted a variation of the same message: "As an employee of Hachette Book Group and in support of my colleagues at Little, Brown and survivors of sexual assault, I am walking out of the New York office this afternoon."

As an employee of Hachette Book Group and in support of my colleagues at Little, Brown and survivors of sexual assault, I am walking out of the New York office this afternoon. #LittleBrownWalkout, #GrandCentralWalkout, @RealDylanFarrow, @RonanFarrow

"Apropos of Nothing" is set to be released on April 7. It will reportedly contain "a comprehensive account of [Allen's] life, both personal and professional," and of his "relationships with family, friends and the loves of his life."

According to a report by Variety, Hachette Book Group announced on Friday afternoon that they would be dropping "Apropos of Nothing."

"The decision to cancel Mr. Allen's book was a difficult one," said a Hachette spokesperson in a statement. "At HBG we take our relationships with authors very seriously, and do not cancel books lightly. We have published and will continue to publish many challenging books. As publishers, we make sure every day in our work that different voices and conflicting points of views can be heard."

Hachette is reportedly in the midst of conducting a company-wide downhill about their decision to cancel the book's publication. Copies of the books have already been printed and, per Variety, Allen has already received at least one payment.

"As a company, we are committed to offering a stimulating, supportive and open work environment for all our staff," the statement continued. "Over the past few days, HBG leadership had extensive conversations with our staff and others. After listening, we came to the conclusion that moving forward with publication would not be feasible for HBG."

All rights will return to Allen.