The right wanted to destroy the "administrative state": Coronavirus is why we need it

For three years, Trump has destroyed the federal government from within. Now we begin to see the true price 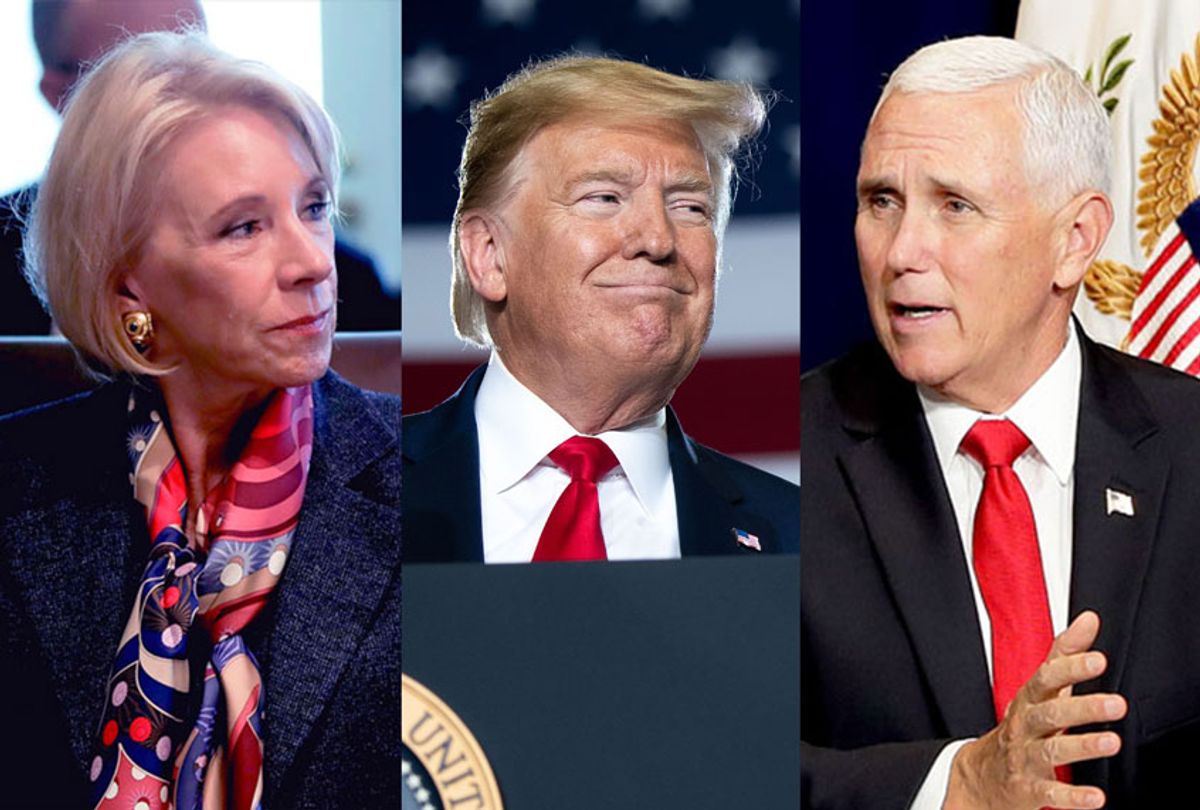 Many Americans, perhaps most, appear to view the president as a public intellectual or shock-jock media personality. Voters increasingly pledge their loyalty to a candidate who not only articulates what they want to hear, but does so in the way they want to hear it. One problem with this reduction of the presidency — one among many — is that it eliminates nearly everything that the federal government does from political consideration.

Donald Trump gains support from his congregants, rather than loses it, when he excels in the only role that he is capable of performing — a weird combination of dive-bar drunkard, unable to filter the stream of pollutants that move through his mind and out his mouth, and Fox News talking head. A former reality television star and a member of the WWE Hall of Fame, Trump represents the culmination of "infotainment," the process that has dragged politics from the Lincoln-Douglas debates down to relentless name-calling, bloviation and lies.

It turns out that the work of politics is actually boring. Talented writers like Aaron Sorkin or David Mamet can make a fictionalized version of drafting legislation or managing public agencies seem exhilarating or amusing, but ensuring that the Department of the Interior competently oversees the management of public land is not likely to translate into a hit show on any cable network or streaming platform.

There is nothing like a potential pandemic to remind an easily distracted electorate that governance matters. As the coronavirus spreads, the death count rises and people all over the world begin to fear infection, the incoherent and dangerous reaction of the Trump administration offers a high-stakes indictment. This is what happens when you elect someone to run the federal government who has no prerequisite knowledge, experience or ability for public policy and administration.

The Obama administration opened 49 overseas offices of the Centers for Disease Control, designed to proactively prevent viruses from reaching pandemic proportions. Over the objections of medical experts within his own administration, our current president has shut down 39 of them. One of these satellite CDC offices was in China.

For the past two years, Trump's budget proposal has included reductions to the CDC and the National Institute of Health. If we want proof that elections have implications on the actual work of government — on not merely who is able to give inspiring or outrageous speeches with a title in front of his or her name — the House Democratic majority prevented those cuts from going into effect.

Congress could not, however, prevent Trump from neglecting the fundamental responsibilities of his position. In 2018, the director of the National Security Council's global pandemic prevention effort resigned, and his entire staff subsequently did likewise. Trump has not replaced them, creating massive vulnerabilities in the U.S. response to the coronavirus outbreak.

Concerned citizens can relax, though, because Trump has appointed Vice President Mike Pence as the "coronavirus czar." Pence's previous high-water mark in public health was denying, and then delaying, the implementation of clean needle exchange programs when he was governor of Indiana — a display of evangelical moralism that experts agree was partly responsible for the increase of HIV infection rates in the state.

The world's wealthiest nation is struggling to disperse testing kits, and running dangerously low on face masks for hospitals and clinics. Meanwhile, the CDC, undermined by Trump, is failing to update testing standards and recommendations as the disease spreads more widely and the death rate rises.

It is not merely Trump's ignorance and imbecility that creates a country unprepared and ill equipped to deal with a health problem, but the entire ideology that underwrites his incompetence.

For decades, conservatives have told the public that, in the words of Ronald Reagan, "Government is not the solution to the problem. It is the problem." One of the most catastrophic actions of the Trump administration has been the empowerment of this right-wing, antisocial mindset — a pathological pursuit that Steve Bannon, Trump's former campaign chief and White House strategist, was honest enough to telegraph. He boasted shortly after Trump's inauguration that item No. 1 on Team Trump's agenda was the "deconstruction of the administrative state."

The dismantling of government institutions and agencies extends even beyond the undoing of every possible aspect of the Obama administration. Trump also killed off Predict, a program from the George W. Bush era that monitored the threat of animal-born diseases to humans.

As cable news follows Trump's every tweet and crude utterance like a child watching a bouncing ball, Michael Lewis reports in his outstanding book "The Fifth Risk" that the Trump administration is deliberately understaffing important governmental agencies, or appointing ideological dolts who despise those very agencies to run them. Betsy DeVos, who would not be qualified to apply for a teaching position in elementary school, is the secretary of education. Trump's director of the Environmental Protection Agency is an MBA with years of experience working as a lobbyist for the coal and fossil fuel industries.

An avalanche of right wing propaganda, along with the Democratic Party's failure to offer a persuasive counterargument, has allowed too many Americans to believe that government is an abstract entity — a scare term that signifies a bunch of elitist bureaucrats who collect handsome salaries on the taxpayer's dime to push papers around and interfere with the freedoms of "real Americans."

Government employees are citizens from every state and every background, more often than not doing the important work of keeping the country safe, efficient, and functional. That all sounds pretty pedestrian and boring, but when a pandemic threatens to affect the lives of literally everyone in the country, it quickly becomes urgent.

"I can do the job" is not a thrilling political slogan, but it was a major part of Hillary Clinton's argument for the presidency in 2016. She lost, to a candidate who manifestly cannot do the job. Americans can only hope we will breathe a sigh of relief, from beneath our respirator masks, if the same thing doesn't happen again this year.