Don Jr. challenges Hunter Biden to debate on nepotism: I "haven't benefited" from my father's office

"Let's talk about who profited off of whose public service" 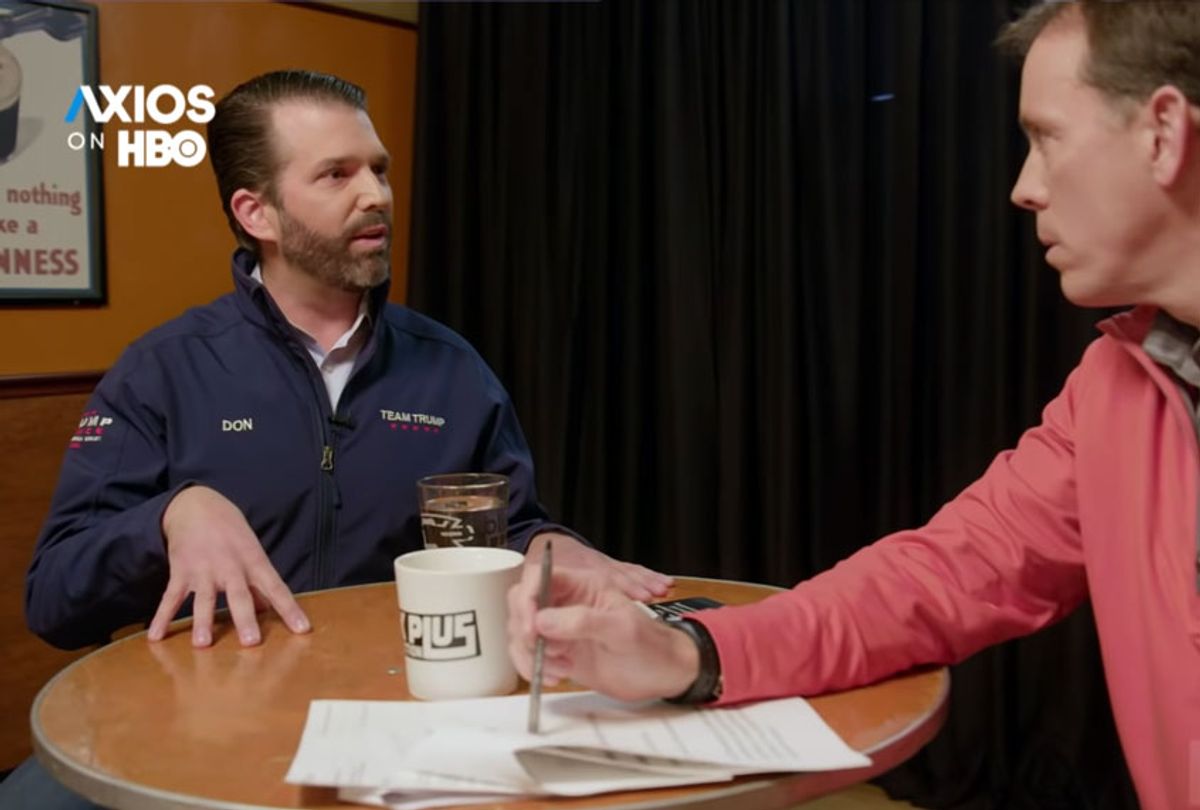 President Donald Trump's eldest son challenged former Vice President Joe Biden's son Hunter to a debate over who has benefited the most from alleged nepotism.

"Let's talk about who profited off of whose public service," Don Jr. told Axios reporter Jim VandeHei in an episode of "Axios on HBO" that first aired Sunday. "Happy to do it. Let's make it happen."

Earlier in the interview, Don Jr. told VandeHei that attacks on Hunter Biden would make up "a big part" of Trump's campaign strategy if his father becomes the 2020 Democratic presidential nominee.

He added, "Hunter Biden, his father becomes VP — all of a sudden he goes over to the Ukraine, and he's making $83,000 a month. The media likes to do this sort of false equivalence — you're doing this, and you're doing that. We stopped doing any new international business deals when my father won the presidency."

A spokesperson for Biden's campaign responded to Don Jr. by saying, "It is hard to believe anything a Trump says on tax returns when Donald Sr. has lied for years about releasing his." Earlier in the interview, Trump Jr. offered to release his own tax returns, whereas his father has appealed to the Supreme Court in an effort to avoid doing so.

The Trump children have long struggled for ways to criticize Hunter Biden for his international business deals while downplaying the significance of their own. Eric Trump, another one of the president's sons, told Fox News host Laura Ingraham in October that "when my father became commander in chief of this country, we got out of all international business."

But the Center for Responsive Politics found last year that Trump and his children have profited from existing licensing and property deals in more than 20 different countries since the start of his presidency. Some apparent new deals were also struck in nations like the Dominican Republic, with a researcher at the Center for Responsive Politics telling PolitiFact that "some Trump-branded foreign projects have only been made public after Trump's election and others have significantly expanded. Projects that appeared to be long-forgotten or dormant were also revisited after Trump's election."

PolitiFact concluded in its evaluation of Eric Trump's claim about international business that "the Trump brothers have traveled across the globe, managing properties and taking action on deals that they say were signed or under works before Trump took office. Regardless of whether these moves should be considered new foreign deals, it's ridiculous to claim the Trump family children stopped all international business after their father's election."

The Trump family's international business ties have also potentially interfered with the administration's ability to implement foreign policy. Ivanka Trump's company received provisional approval for three new Chinese trademarks in 2018 shortly after the president met with that nation's leader, Xi Jinping. Her husband, Jared Kushner, has been accused of supporting a military blockade against Qatar promoted by Saudi Arabia and the United Arab Emirates after Qatar refused to help him with a real estate deal.

"They feel like they have the license to say whatever they want," Biden told Robach. "It feels to me like living in some kind of 'Alice in Wonderland,' where you're up on the real world and then you fall down the rabbit hole. And, you know, the president is the Cheshire Cat asking you questions about crazy things that don't bear any resemblance to the reality of anything that has to do with me."

Though Biden admitted that his last name has helped his career, he denied allegations of earning $1.5 billion from a trip to China. He also stepped down from the board of a management company of a private equity fund connected to the Chinese government during the course of his father's presidential campaign. At that point, he had already left the board of the Ukrainian natural gas company Burisma, which was at the heart of the president's impeachment scandal.

There is no evidence that Hunter Biden committed wrongdoing in China, even though right-wing media outlets like Fox News have accused Biden of using a 2013 trip to China on Air Force Two to obtain $1.5 billion for a private equity he founded. Similarly, while the president and his allies have falsely claimed that Joe Biden had a Ukrainian prosecutor fired when he was vice president in conncection to his son's work with Burisma, there is no evidence that either ever Biden acted improperly.

Watch the full "Axios on HBO" interview via YouTube: