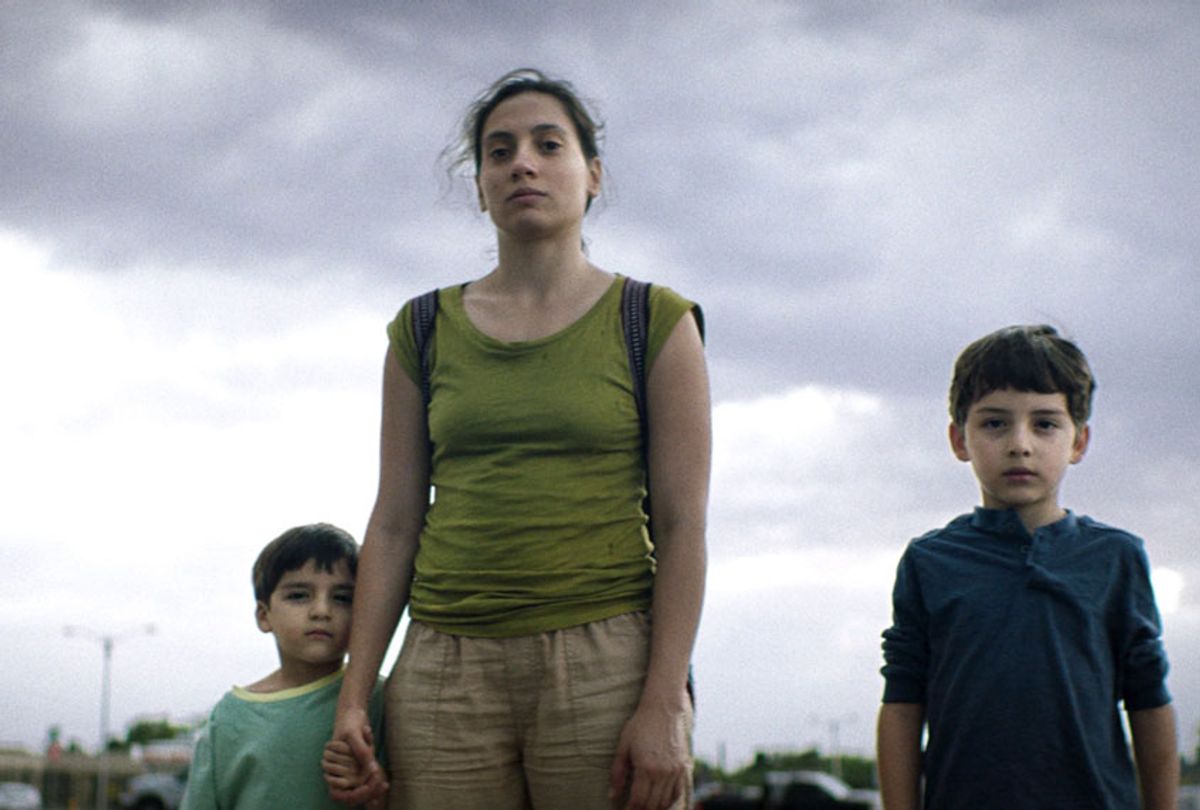 "Los Lobos," which won the Grand Jury Prize at the recent Berlin Film Festival, has Lucía (Martha Reyes Arias), and her two sons, 8-year-old Max (Maximiliano Nájar Márquez) and 5-year-old Leo (Leonardo Nájar Márquez), immigrating from Juarez to Albuquerque. They move into a run-down apartment building run by Mr. and Mrs. Chan (Johnson T. Lau and Cici Lau). While Lucía goes off to work, she leaves the kids alone in the tiny, empty, dirty apartment, and gives them rules: Don't step on the carpet without shoes (it is that disgusting); don't leave the house; keep the place tidy; and hug your brother if you fight. Moreover, she promises a trip to Disneyland if they learn some English lessons.

However, after a few hours, on the first day, the kids become restless and bored. Their imaginary flights of fantasy, rendered in nifty animated sequences, can only occupy them for so long. They long to step outside, play with the other kids in the complex, and even go to school.

Writer/director Samuel Kishi Leopo's semiautobiographical film is heartbreaking as it depicts the limited world of Max and Leo. And through the perspective of these children, Leopo's film addresses themes of food insecurity, housing and worker exploitation, childcare, the immigrant/American Dream, and striving for a better life.

The filmmaker chatted via WhatsApp about making a semi-fictionalized film from his own experiences. The film will screen March 11 at the Miami International Film Festival.

What did you decide to include or exclude from your experiences to make something personal into a film that is universal?

At the beginning, the approach was difficult. I started to write, and then I'd cry and call my mom and brother. When I calmed down, I said that I needed some help. I called my co-writers, Luis Briones and Sofía Gómez-Córdova, and we made a few decisions — yes, it's my story, but it's going to be semi-autobiographical. We put a lot of fiction in the story. I did an exercise to open my heart to write and then close it to protect my feelings and keep working. If I am trying to do something personal for my family or mom, other people wouldn't care, so we tried to make the story for everyone.

How did your mother and younger brother react to your decision to recount your lives on screen?

My mom reacted pretty well. She told me, "Let me help you and let's talk about these memories." We did some interviews when I was writing the film. I asked her for her point of view and her story. I was a little boy and I remember the room and waiting for her to come home. I asked, "How did you manage things?" She told me her story, and I had a different approach about the film. It was very surprising. I talked with the co-writers and the actress, Martha, and we did more interviews with immigrants and children, working women and single moms. We found a lot of connections and children with the same story of waiting for their mothers and fear of [immigration] police, and their thoughts about being more American or Mexican. They answered, "I am Santanero," which meant they identified with their roots.

My brother [Kenji] wanted to do the music. Ideally, I wasn't thinking of my brother for that, but he wanted to make the music. He had it in his head. He needed one week of silence. He said, "Please don't talk to me. I'm going to compose this," and he made a lot of music. I loved it. But I only corrected one piece — because it was very big with a lot of strings, during a Halloween scene, and we needed it to be simpler. One string, guitar, and piano, because it was an intimate scene.

This is very much an immigrant story, where characters have one foot in the old land and one foot in the new land. What observations do you have about this, and the immigrant experience, the unreachable American Dream, and wanting a better life?

This is another approach — What is the American Dream, this utopia? One of the thoughts I had when I was doing research, and looking at Mexican movies about immigration, is the story is often about travel and how they get to the U.S., the trains, and the border, etc. But I didn't find movies after you started a new life in America. What is happening to these people? You are transforming. So, what I found was this feeling that they had, and that was very powerful and painful. I interviewed people who made a new home in America but felt that they were not part of the system. They are invisible. It was important to talk about these "ghost people" because I was one. I don't belong to this system. I remember being afraid of being deported. And how Disneyworld is a symbol for children. The goal is to have hope and stay together and find happiness. Paul Auster wrote, "We're not perfect, but we are real," and that is one of the things I wanted to express in this film. These people are not perfect, but they are real and strong.

The film is largely free of sentiment. These characters have despair, optimism, and determination. What message are you looking to convey to viewers? It's a difficult film because every moment is fraught with danger. We watch and worry for these kids and Lucía.

When I was writing and directing, people told me that one of the kids has to die to make a big impact to the public. And I said, "No!" I wanted a dangerous ambience, where there were a lot of possibilities for the kids to get hurt, but I wanted to make this an empathetic movie, full of hope. There is a lot of violence, but it's not misery porn, which a lot of Latin American films are. I wanted to put a face, not statistics or numbers, on this immigrant story. If you laugh, and feel pain, and love for these characters, you're going to get more empathetic. I wanted it to be bittersweet.

You coax two amazing performances from Max and Leo. How did you work with the kids on their roles?

They are very intelligent kids. We had a big casting session — five months. I saw 9,000 or more kids. We had an acting workshop with six kids, and one was Max. It was like a reality show. I chose two from the six: Max and Leo. We needed them to be honest. Acting is play, but you have to play with honesty. These kids have these imaginative minds, and I used that. If you play with a kid and say, "Be Superman," they get a costume and they are Superman. We worked with Martha, Max, and Leo and their relationship. They lived together. Their parents trusted us and told us that Marhta could keep the kids for a week, so they made it like real life. She took them to school. One exercise we did with an acting coach involved the kids climbing up Martha and having her walk around with them on her shoulders for 20 minutes, so it was a metaphor for what they had to do in the movie. I explained the meaning of the scene to the kids. I don't care if they learned the dialogue as long as they got the meaning of the scene.

You convey a palpable sense of boredom in the film, but you manage to make it interesting. Can you discuss that?

It was difficult because how do you make this portrait of bored kids without it being boring? I looked at Kevin Smith's "Clerks," where it's about nothing. And Jim Jarmusch and Fernando Eimbcke's films. This was like a Jarmusch movie. I showed where these lonely kids were growing up, and how only 30 minutes passed, or how they learned English by learning the bad words. It's funny, but it shows what kind of neighborhood they are in. You feel that these kids are locked in a cage and want to go out.

What can you say about the use of animation?

For me, the animation is these two little wolves, who are the alter egos to these kids. I approached this idea as an exercise with the kids. They drew what was in their mind, and that allowed them to play. It's an interesting how they made their portraits. I thought it was good to have them use their imagination since they couldn't leave the house. It made their reality fantasy. They made the ninja wolves and gave them powers.

What can you say about how the film addresses issues of food insecurity, as well as childcare, housing and worker exploitation?

That is what I was saying earlier about them being ghosts in the system. You're afraid as a Latin immigrant. You don't have rights in this country. So, I wanted to make the film to make the faces of these immigrants real. Another problem is housing. When I was scouting in Albuquerque, I went to these complexes that are in the "war zone," and I didn't see a lot of people. It was empty. I stayed a few weeks and talked with some people, and they would stay in their homes, and not want to interact with the outside. That was interesting because I don't see that in Mexico. I wanted to make a portrait where these kids and their mom were part of this society. For me, Mexico represents a big wound with a lot of blood, so when the characters go to the U.S., they heal a little. But it's a big scar. So, we, in this community, are like animals licking our wounds. That's why they are "Los Lobos," wolves, licking their wounds.

I am making a portrait of immigration, housing, and workers. I want to show the audience that this world exists, and it's real. That's why I have portraits of people looking directly into the camera in the film. The last shot is this family looking to the camera. They are from the war zone.  We can't ignore them.