The presidency is an actual job: This idiot can't do it

Have we forgotten that being president isn't about posturing and tweeting? Without competent leaders, we're toast 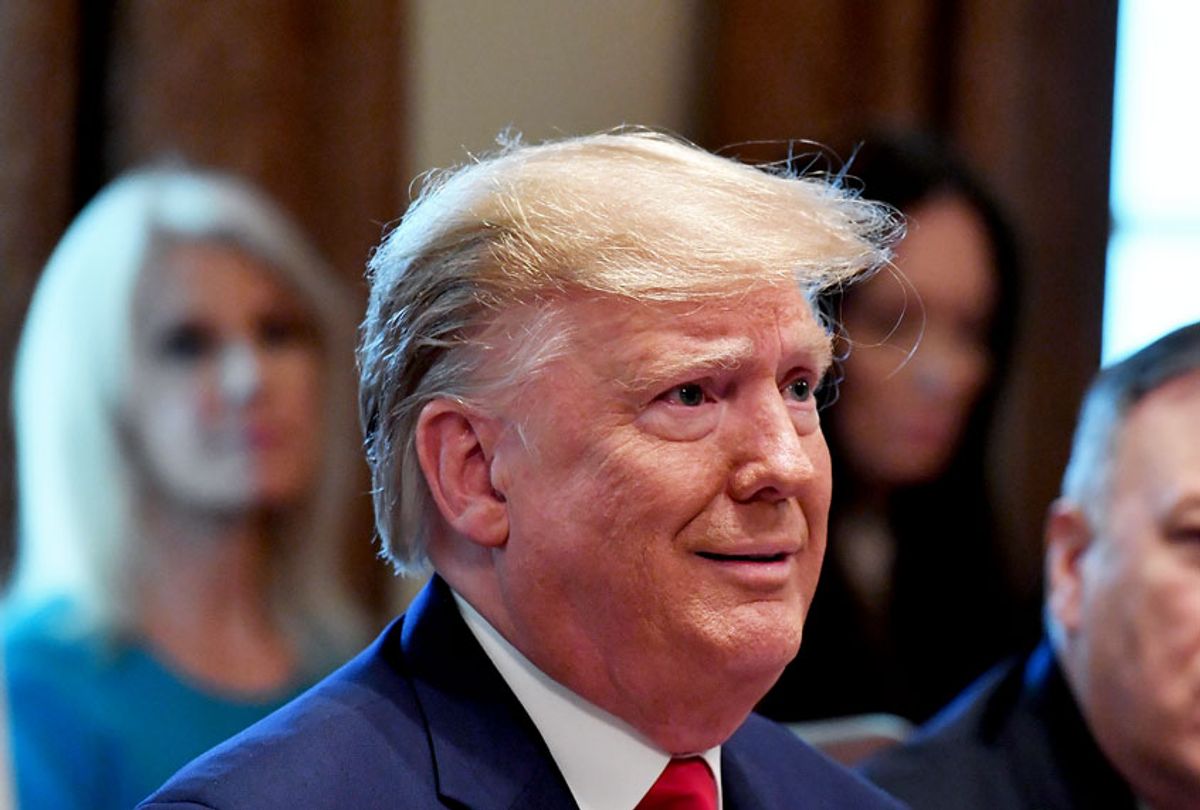 President Donald Trump speaks to reporters during a Cabinet meeting at The White House on October 21, 2019 in Washington, D.C. (Photo by (Ricky Carioti/The Washington Post via Getty Images)
--

Steven Wright, the great surrealist comedian, once inadvertently described how the last several weeks, if not the last three years, have felt to so many of us.

On his 1985 "I Have a Pony" concert album, Wright joked about the sensation of leaning too far back in his chair, but catching himself at the last second just before falling over backward. "I feel like that all the time," Wright added. We've all done it at one point or another, and we're all familiar with that momentary adrenaline rush of out-of-control panic.

With a pandemic rapidly circulating the globe, with the first stages of another financial crisis in progress and with a breathtakingly incompetent White House running the show, we're all feeling a bit like we're leaning too far back in our chairs. And we're more or less experiencing that sensation "all the time." So much of it's in reaction to the aforementioned breathtakingly incompetent White House and our even more incompetent president. He's supposed to be handling this with expertise and aplomb, as most previous chief executives have, but he absolutely isn't. In any way.

Instead, it's another crisis in which Donald Trump and his team of ass-kissing henchmen are dealing with it like the Three Stooges trying to fix the plumbing — Curly accidentally trapping himself in a cage of leaky pipes, while geysers of water shoot out of the light fixtures. Trump's total absence of presidential qualifications, like the fuel rods at Chernobyl's No. 4 reactor, are becoming rapidly exposed, precipitating a political, economic and public health meltdown unlike anything we've experienced in the modern age.

For several years now, Trump has managed to bullshit his way through his presidency, walking a narrow path while pretending he knows what's going on, pretending he has a handle on the details and responsibilities involved in serving in such a rarefied position.

Despite his inner delusions and outer bragging, he doesn't.

For three years, Trump leaned heavily on his skills as a well-practiced New York con man, and, accordingly, continued to cultivate the fanboy adulation of his Red Hat cult as his exclusive audience. Thanks in part to the blinding velocity of the firehose of news and a successful whitewashing effort provided by Fox News, previous nightmares such as the president's incompetent, callous and punitive reaction to Hurricane Maria have whizzed on by without Trump experiencing any blunt-force damage to his low-40s approval polling.

But now Americans at large are waking up to a grotesque, unavoidable reality: This isn't new. Trump has always been staggeringly out of his depth as president, routinely overwhelmed by the rigors and requirements of the gig, while appearing to act based solely on his own political and financial desperation.

For those of us who are overwhelmingly aware of his record, Trump's lack of qualifications for such a crucial job have always been blindingly obvious. As the coronavirus expands its reach, however, average voters who are neither political commentators or adoring loyalists deeply embedded inside his cult of tyranny are just now catching up in shocked horror to Trump's inability to handle the job. You can almost hear the sickening thud of jaws dropping at one example after another of the president's laundry list of fumbles in the face of a deadly emergency — job-performance deficiencies that make George W. Bush's presidency seem like Abe Lincoln by way of Capt. Steve Rogers. These bungled and botched reactions are rapidly fusing into our third simultaneous crisis, a "Trump Crisis," inevitably worsening both the pandemic and the stock market free-fall.

While Trump clearly didn't cause the pandemic, his total absence of sober and, most important, trustworthy leadership has worsened it, not unlike the mayor of Amity Island's reaction to the shark attacks in "Jaws." This is where it might be nice to have a president who can be trusted, at least as much as Americans have trusted other presidents in a crisis, rather than a buffoon whose very appearance is a lie — a makeup-slathered, badly-coiffed hustler who lies with the same unblinking ease as the Stones performing "Satisfaction," to the tune of nearly 17,000 lies in a little more than three years.

By deceptively telegraphing a false sense of security to his disciples — the last remaining voters who inexplicably trust him — Trump has already endangered American lives, potentially exposing his people to the virus by encouraging them to shop and travel, while also diminishing the threat by inaccurately noting that the coronavirus isn't a big deal. Trump also continued to hold his usual ego-stroking rallies while fanboys infected with the coronavirus attended, potentially infecting Rep. Matt Gaetz, Sen. Ted Cruz and Rep. Doug Collins, among others, at Trump's CPAC rally.

Trump's grossly pathetic reaction to the pandemic has effectively highlighted an aspect of the presidency that's been lost in the fever swamps of social media and cable news. Despite what some of us have come to believe, the presidency is a real job, one that requires certain skills — skills which, for various reasons, around 40 percent of us just don't prioritize any more.

At some point in recent years, the presidency became so utterly devalued that too many Americans have been led to believe that just about anyone could do it, including the doofus who bankrupted four casinos, the well-known bullshit artist and former host of "Celebrity Apprentice." Too many Americans are badly mistaken.

Perhaps it was the Republican Party's nonsensical pitch about electing someone we'd like to have a beer with, the notion that it was awesome and, indeed, patriotic to elect someone just like us. Frankly, I don't want a president who's just like me, nor should you. Why the hell would we want a surgeon or an airline pilot who's just as undisciplined and as unskilled as we are? For that matter, why would anyone in their right mind allow someone who behaves like Donald Trump to operate on their pancreas or fly them across the Pacific Ocean? Along those lines, why, then, would we allow this badly incapable human to possess the authority to launch nuclear weapons or to manage the response to a global pandemic? There's a different kind of sickness in America these days, a political one, and it has to be eradicated before we pass the zero-barrier between here and idiocracy.

The presidency used to be a job that required unmatched decency, experience, knowledge and discipline. It's supposed to be our job as voters to choose a president, or any political leadership role for that matter, based on a strong predisposition for these ideals.

As voters, we're hiring an employee to do something almost no one can do. We're hiring a national steward to manage the most colossal and powerful government in human history. We're not hiring a bug-eyed TV pundit to loudly regurgitate all our rants, biases and vendettas. The presidency isn't luggage for stowing our feelings, our grievances or our social media brands. The presidency isn't about our identities, it's not about "owning" the other side and it's not about telling us what we want to hear. It's about rational, steady leadership, and there's none of that in the White House today as the world shuts down around us.

As voters and as employers, we need to stop acting like selfish children, making our selections all about us and our hang-ups, and instead begin to realize that it's a job that only 44 other people have been chosen to occupy. It's a job of significant gravity and solemnity.

The presidency isn't a show, elections aren't a game and the president should never be a game-show host.

The ascendency of Donald Trump, along with this three-year, seemingly endless plasma stream of abnormalcy, now metastasizing into full-on Trump fatigue, is a consequence of this glitch in our fellow Americans' perception of the modern presidency. This week and in the weeks to come, people will die because too many of us forgot what this job ought to signify and what qualities those who occupy it need to possess.

We're all learning hard lessons right now, and one of them is that we urgently need to re-prioritize who we're hiring and especially why we're hiring them. There's no hope for the current president, but there's an election in less than eight months. It's another opportunity to finally lean forward in our chairs, and end this madness before we fall over backward and break our necks.