There's a public health crisis: Time for journalists to tune out our ignorant president

Trump's idiocy is a sideshow. For real information, reporters must turn to genuine medical and scientific experts 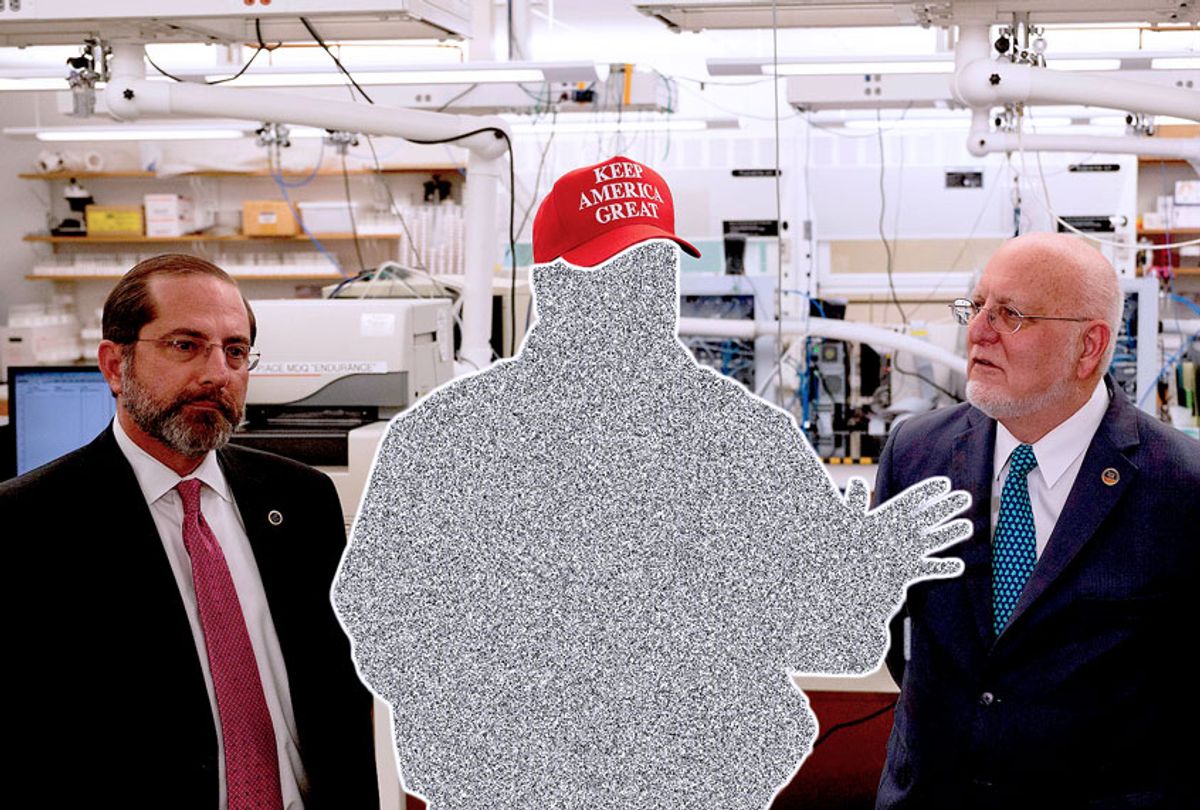 At a time when accurate information could save lives and disinformation could kill, Donald Trump continues to tell self-aggrandizing lies and political journalists continue to put them in their headlines.

One or the other of those things has got to stop.

Sure, there are more news stories to be written about how Trump's bad judgment, obsessive vanity and fury at being contradicted have led to a warped and flailing federal response. Sure, his rambling and increasingly bizarre statements need to be noted for the record.

But going forward, the most vital message reporters should convey about Trump — over and over again — is that he is out of touch with reality and failing to lead.

In the absence of that leadership, our elite newsrooms need to step up. This is a time for our nation's best journalists to enable our nation's smartest people to set the agenda, rather than waiting for the White House to do it.

Instead of political journalists, it should be our finest health and science journalists leading the coverage. They should be telling the public what knowledgeable, informed public-health experts, international organizations, state-level officials and thoughtful policymakers think we need to do next.

Ideally, there would be other, established places journalists could turn to in a crisis — like the federal bureaucracy, or the opposition party. But Trump has terrified so many executive-branch officials into either shutting up or going along that even traditionally trusted voices and institutions are at best hit or miss. The Democratic candidates for president have failed to rise to the challenge. And congressional Democrats are only now starting to form plans.

CNN chief media correspondent Brian Stelter, on his Reliable Sources broadcast, issued a clarion-call for "clear-eyed no nonsense news coverage during this crisis." He explained:

What we need do in this moment is prioritize accurate information from experts over misinformation from politicians. You know, Trump and the news media both have a tendency to make, well, everything about Trump, right? But this virus story is only a little bit about Trump…

Should he be doing things differently? Yes. For example, the CDC says older Americans should limit travel. But he's not amplifying that message. He should be right now. In fact, he can tweet about it right now.

So, that's the story about the president. But the press should point out when he is an obstacle and then move on. Don't make it all about Trump. This story is too important for that.

They just can't quit him

As long as the politics staffs remain enabled and empowered, however, you'll be getting more stuff like Shannon Pettypiece, Hallie Jackson and Monica Alba's reporting for NBC about the messaging crisis in the White House:

Multiple sources … acknowledged that Trump is simply not on the same wavelength as the rest of his team, but they said there isn't much they can do to change his public tone. Trump has been advised by some close to him to let public health officials, rather than the politicians, take a more forward-facing role, according to a person familiar with the conversation. But a person close to the White House said Trump thinks it helps him politically to keep doing what he has been doing.

You'll be getting garbage takes, like that Trump "struggles to find the balance between public reassurance and Panglossian dismissiveness."

That's an actual line from Peter Baker's "news analysis" for the New York Times headlined "For Trump, Coronavirus Proves to Be an Enemy He Can't Tweet Away." Baker's big takeaway:

Mr. Trump, who is at his strongest politically when he has a human enemy to attack, has seemed less certain of how to take on an invisible killer. The role of calming natural leader is not one that has come easily as he struggles to find the balance between public reassurance and Panglossian dismissiveness.

Yeah, that last line really killed me. Trump isn't struggling — he never struggles. He just reacts — impulsively and egotistically. He's certainly not struggling for balance. And he's not trying to reassure the public as much as he is trying to con them into believing he has things under control. As for "Panglossian dismissiveness" — a reference to a naively optimistic character in Voltaire's "Candide" — that is a world-class supercilious Timesian euphemism for "lies constantly" (h/t Reed Richardson).

Baker's first hint that maybe this is more than just an issue of messaging came eight paragraphs in, as he paused briefly to let us hear from … Dick Cheney's cardiologist? Nevertheless, it's a good quote:

Dr. Jonathan S. Reiner, a prominent cardiologist who treated former Vice President Dick Cheney and wrote a book with him, said he was convinced that the Trump administration failed to move more quickly to test for the virus after it emerged in China because the White House did not want to admit the scope of the threat.

"When the story is finally written," he said on Sunday, "we'll come to understand that tens of thousands of lives were placed at risk because of a political decision made by the president."

Baker's reporting on the virus continues to be Exhibit A for pulling people like him off the story. He also reported on Trump's megalomaniacal ranting outside the Centers for Disease Control and Prevention on Friday as if it were just a normal briefing from a normal president, under the headline "Trump Says 'People Have to Remain Calm' Amid Coronavirus Outbreak."

David Nakamura, writing for a Washington Post feature called "The Debrief: An occasional series offering a reporter's insights," felt liberated enough to actually tell it like it was:

Sporting his trademark red 2020 campaign hat with the slogan "Keep America Great," the president repeatedly second-guessed and waved off the actual medical professionals standing next to him. He attacked his Democratic rivals — including calling Washington Gov. Jay Inslee a "snake" for criticizing his response — and chided a CNN reporter for smiling and called her network "fake news."

And he described coronavirus testing kits — which his administration has been criticized for being slow to distribute — as "beautiful" and said they were as "perfect" as his Ukraine phone call last summer that led him to be impeached.

The upshot was that the self-proclaimed medical savant came off looking less interested in his administration's unsteady efforts to mitigate the spread of the virus than he was in bolstering his own status in a campaign year.

Trump also acknowledged — out loud! — that he didn't want to allow people trapped on a cruise ship to debark and increase his "numbers." That led Crooked Media editor in chief Brian Beutler to wail:

The back story fills in

Major stories in the Times and the Post over the weekend continued to contribute to the picture of a government paralyzed by Trump's ego — though none did so as effectively as the Time Magazine story that I wrote about on Friday.

From the beginning, the Trump administration's attempts to forestall an outbreak of a virus now spreading rapidly across the globe was marked by a raging internal debate about how far to go in telling Americans the truth.

Clear and honest communication is essential, they wrote:

But from Mr. Trump's first comments on the virus in January to rambling remarks at the C.D.C. on Friday, health experts say the administration has struggled to strike an effective balance between encouraging calm, providing key information and leading an assertive response. The confused signals from the Trump administration, they say, left Americans unprepared for a public health crisis and delayed their understanding of a virus that has reached at least 28 states, infected more than 300 people and killed at least 17.

That was fine as far as it went, but as NYU journalism professor and media critic Jay Rosen tweeted:

In the Washington Post, Ashley Parker, Yasmeen Abutaleb and Lena H. Sun described "the precious weeks that President Trump and his administration frittered away in trying to deal with the coronavirus":

Several experts said the United States should have spent more time making sure hospitals and state and local health departments had the money, training, personal protective equipment and resources they needed to respond to outbreaks. But the White House's messaging in January and well into late February that the virus was contained and under control probably led health-care facilities to be insufficiently prepared, these experts added.

Remember that anecdote in a Ron Suskind book about how George W. Bush, after being warned in early August 2011 that Osama bin Laden was determined to strike the U.S., told his CIA briefer: "All right. You've covered your ass now"?

Well, Trump was apparently more focused on the bad press he was getting about his half-assed vaping ban than he was on an imminent pandemic.

According to the Times, Health and Human Services Secretary Alex Azar first alerted the National Security Council about the coronavirus threat on Jan. 3 (yes, nearly 10 weeks ago).

Then, the Times reported:

On Saturday, Jan. 18, a day after the C.D.C. dispatched 100 people to three American airports to screen travelers coming from Wuhan, China, Mr. Azar made his first call to Mr. Trump about the virus, dialing him directly at Mar-a-Lago, his Florida estate. The president insisted on talking about e-cigarettes first, but Mr. Azar steered him to the virus.

The Post reported another, similar conversation, this one face-to-face:

During a late January meeting at the White House, Azar was having trouble focusing Trump's full attention on his coronavirus briefing. Azar had arrived to brief the president on the latest virus news, but Trump instead interjected, badgering the health chief about the administration's messy decision to implement a limited ban on flavored e-cigarettes.

Why did you push me to insert myself into a controversial political issue? Trump demanded.

That will definitely make it into the movie.

It's not even clear who's making the final calls about the government response anymore.

For instance, Noah Weiland and Maggie Haberman reported for the New York Times that the State Department advised Americans against traveling on cruise ships, despite Trump having "resisted requests from administration officials" to do anything that would harm the cruise industry.

But Mike Stobbe reported for the Associated Press that "the White House" — whatever that is — "overruled health officials who wanted to recommend that elderly and physically fragile Americans be advised not to fly on commercial airlines."

Azar, meanwhile, told Fox News on Monday morning: "This is a very serious health problem. Nobody is trying to minimize that."

There's even some reason to think that Trump's leadership vacuum is part of what is causing the current stock market downturn, the worst since the financial crisis of 2008. Yale history professor Joanne Freeman tweeted:

The leadership void is the big White House story. But there are more important things for us to be focused on, such as: How do we make it through this?