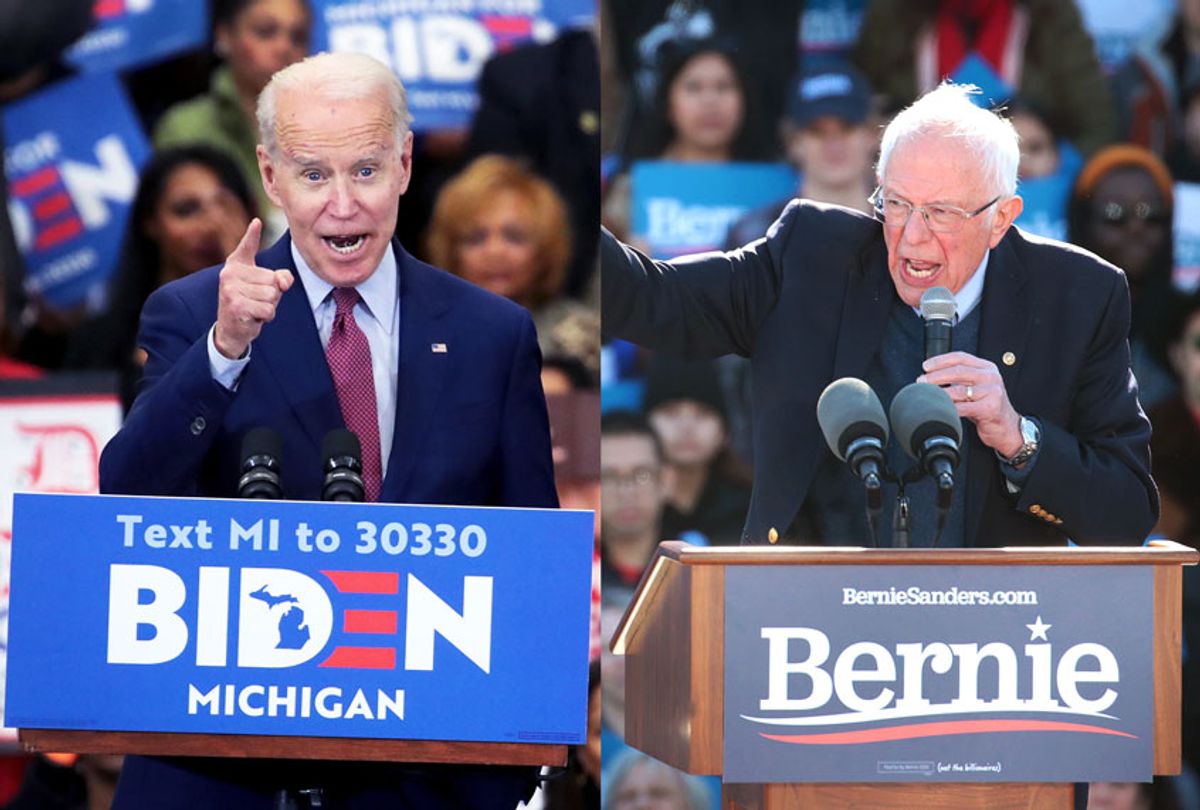 Supporters of Joe Biden called for Vermont Sen. Bernie Sanders to drop out of the Democratic primary following another dominant performance from the former vice president on mini-Super Tuesday.

Biden won in Idaho, Michigan, Missouri and Mississippi, according to the Associated Press. Early exit polls showed that Biden was the overwhelming choice of black and older voters as Sanders' support among those groups slipped from his 2016 totals. Sanders narrowly won Michigan in 2016 and lost Missouri by just 0.2% against future nominee Hillary Clinton.

Biden won Michigan by a margin of 53-36, Missouri by 60-35 and Idaho by 49-42. He also dominated Mississippi in an 81-15 landslide. Sanders currently has 14.9% of the vote in Mississippi and would be denied any statewide delegates if he does not hit at least 15%.

Biden addressed supporters at his Philadelphia headquarters, while Sanders' campaign said the senator would not speak publicly on Tuesday evening.

"To all those who have been knocked down, left behind: This is your campaign. Many pundits declared this candidacy was dead. Now we're very much alive," Biden said. "It's more than a comeback. It's a comeback for the soul of this nation."

Biden reached out to Sanders' supporters, offering a message of unity.

"I want to thank Bernie Sanders and his supporters for their tireless energy and their passion. We share a common goal," he said. "And together we'll defeat Donald Trump. We'll defeat him together."

Biden vowed to deliver a "bold progressive vision" to the American people and to "rebuild the middle-class." The former vice president hit themes like economic and racial inequality.

"We've got to bring everybody along," he vowed.

But his overarching message was much the same as it has been since the campaign began: restoring the soul of the nation.

"Winning means uniting America — not sowing more division and anger. It means having a president who not only knows how to fight but knows how to heal," he said. "At this moment, when there's so much fear in the country, there's so much fear across the world, we need American leadership. We need presidential leadership, that's honest, truthful, reassuring and steady."

"Tonight, we are restoring dignity, decency and honor to the White House," he added. "That's our only goal."

The two candidates were originally expected to speak at rallies in Ohio as results were announced, but events were scrapped due to concerns over the spread of coronavirus. Ohio Gov. Mike DeWine declared a state of emergency on Monday after three residents tested positive. The spread of coronavirus threatens to upend the race in the coming weeks and could make it difficult for Sanders to make up ground with key primaries coming up. The campaign said it would evaluate future events on a case-by-case basis.

CNN also announced that Sunday's debate in Phoenix will be held without a live audience as a precaution. Rep. James Clyburn, D-S.C., who endorsed Biden last month, suggested the party may need to "step in" to cancel future debates, according to NPR's Miles Parks.

"I think when the night is over, Joe Biden will be the prohibitive favorite to win the Democratic nomination . . . If the night ends the way it has begun," it is time to "shut this primary down," Clyburn said.

Former candidate Andrew Yang, who supported Sanders in 2016, agreed that it was time for the party to unite behind Biden on Tuesday.

"I hereby am endorsing Joe Biden," he tweeted. "The math says Joe is our prohibitive nominee. We need to bring the party together. We need to start working on defeating Donald Trump."

Longtime Democratic strategist James Carville, who worked on Clinton's 2008 campaign, asserted that Democratic voters "want to shut this thing down."

Carville said Sanders built a "remarkable" movement but argued that "we can't diss" the majority of voters who backed Biden.

"Let's shut this puppy down, and let's move on and worry about November," he told MSNBC. "This thing is decided. There's no reason to keep it going not even a day longer."

The Sanders campaign rejected these calls.

"I, for one, am extremely excited about this debate all the moderates are panicking about," wrote campaign press secretary Briahna Joy Gray. "The delegate count difference is only about 150 points out of 4051 total. America finally gets to see Biden defend his ideas, or lack there of, on Sunday."

But Sanders supporters acknowledged that the mood in the campaign was dour.

"There's a generational divide in the Democratic Party on health care, on climate change, on foreign policy," Ocasio-Cortez said. "Our generation seems to have a streak of progressivism that doesn't seem to be going away soon."

Sanders campaign co-chair Rep. Ro Khanna, D-Calif., said the losses would not push the senator out of the race.

"There's no doubt that the polling and momentum right now is with Vice President Biden. And Sen. Sanders acknowledges that," he told CNN. "But he does believe that debates in the past have changed, dramatically, the race... I think he's earned his right to make his case at the debate."

Sanders hoped to rebound on Tuesday after losing in 10 of the 14 states that held primaries last week, while Biden aimed to further extend his delegate lead. The former vice president entered the night with a margin of 670-574 pledged delegates, though some delegates from Super Tuesday states have yet to be allocated.

It was the first time voters headed to the polls since Sen. Elizabeth Warren of Massachusetts and former New York Mayor Michael Bloomberg suspended their campaigns. Rep. Tulsi Gabbard, D-Hawaii, who won her first two pledged delegates after finishing second in last week's caucus in American Samoa, remains in the race. However, the congresswoman, who failed to qualify for the next debate, has a 0% chance of winning a plurality of pledged delegates, according to the latest primary forecast from FiveThirtyEight.

Sanders pulled off a stunning upset in Michigan in 2016, eking out a narrow victory over Hillary Clinton after the former secretary of state led by more than 20 points in the polls. While Michigan proved a difficult state to poll in 2016, the latest surveys taking the 2016 electorate into account showed Sanders trailing Biden by double-digits in the Great Lake State.

Sanders also dominated in Washington in 2016, when the state held a caucus, but polls showed a tight race between the two candidates this time around.

There was not as much polling out of the smaller states, however. Sanders won Idaho by 55 points in 2016 and North Dakota by nearly 40 points, though Biden appears to have the edge in Mississippi and Missouri after sweeping the South and Midwest last week.

While Sanders appeared to be the heavy frontrunner after popular vote wins in Iowa, New Hampshire and Nevada, the race was turned on its head after Biden landed the highly-sought endorsement of Clyburn, the No. 3 Democrat in the House, and went on to win South Carolina's primary by nearly 30 points.

Biden's South Carolina win cleared the field of fellow moderates Sen. Amy Klobuchar, D-Minn., and former South Bend Mayor Pete Buttigieg, both of whom endorsed him ahead of Super Tuesday. Biden won 10 of the 14 states that voted last week, including Texas, Klobuchar's home state of Minnesota and Warren's home state of Massachusetts. Biden received overwhelming support from black and older voters, while Sanders was unable to turn out young voters at the rate he needed to negate the former vice president's advantage among a more reliable demographic.

Biden's dominant performance on Super Tuesday, particularly in states where he did not campaign or spend any money, prompted Bloomberg and Warren to drop out of the race. Bloomberg quickly threw his support behind Biden. Warren, who ran on a similar platform to Sanders, has yet to endorse one of her former rivals.

Biden's string of wins put him squarely ahead in the delegate count, and polls released in the past week show the former vice president gobbling up many of the supporters left behind by Buttigieg, Bloomberg and Klobuchar. Three national polls released this week found Biden leading Sanders by a margin of 16-19 points.

The two candidates will face off in Arizona, Florida, Illinois and Ohio next Tuesday after a debate on Sunday in Phoenix. Though there has not been much polling out of those states, surveys have shown Biden well ahead in the delegate-rich state of Florida, as well as Arizona.